Brigid Kennedy is a writer and researcher based in Chicago. She recently completed her master’s in cinema and media studies and is interested in representations of memory and queerness in popular media.

Gone Home (2013) is an explicitly queer videogame with an explicitly queer narrative. The player plays as Katie, returned home after a long trip to Europe, as she re/familiarizes herself with her family’s home while finding and reading notes and other clues from her younger sister, Sam, hidden around the house. During gameplay, Sam is revealed through her notes to be queer, and ultimately leaves home to be with her girlfriend. Although we play as Katie, Sam is the game’s protagonist, and the character whose narrative and narration shape our experience of the game. Several props and other aspects of the mise-en-scène indicate queerness or reference in-jokes about the culture of lesbians and queer women and are mentioned in the narrative or otherwise support it; these include the cats, the celebrity photos in Sam’s locker, the hair dye, and Riot Grrrl cassettes and aesthetics. 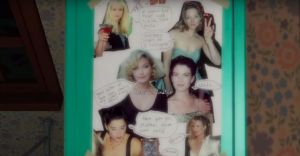 The collage of celebrity photos and imagined conversations displayed on the outside of Sam’s locker.

In this essay, I use the word “queer” both to denote a relationship to LGBTQIA+ identities and in its older sense—to mark strangeness. This older sense is important to my analysis, because, as I will demonstrate, Gone Home works to queer the domestic by making the domestic strange. By queering the domestic, the game intertwines these two definitions in a way that is both recognizable and potentially affirming. Here, I am not interested in the narrative devices and narrative-driven aspects of the mise-en-scène which mark Gone Home as queer. Rather, I aim to consider the game’s use of space and the way players are encouraged to navigate that space. Through this consideration of space, I demonstrate that a gameplay experience can be queer, regardless of narrative.

To discuss the ways in which a young queer person might navigate the domestic space, one can begin by discussing parental and other familial relationships, and the politics of secrecy and confession within those relationships. Gone Home asks us to take the phrase far more literally—how might a young queer person navigate domestic space? The game heavily privileges space—it is an exploratory game, and the house is a vehicle for telling a story. The player is given a great deal of control over the space and its navigation, and that control is very rarely taken away (there are almost no cut scenes, for example). One never sees a fully-realized Sam—or any other character, for that matter—but she has left clues and breadcrumbs around the house for players to find. In doing so, she (or the game) has marked her spaces, given us a sense of her own domestic life and experiences, and guided our own navigation through the home as we work to collect the clues. Players glean some information about Sam’s navigation of other spaces, too—a concert and her high school, in particular—but the game prioritizes the domestic space in all aspects.

The cinematic house has long been recognized as a projection of body and mind, the physical location of the secrets of its inhabitants (White 140-2). In this ludic house, explicitly queer characters are notably absent from the domestic. They ARE the house, but they are not IN the house. By following Sam’s notes and clues, the player (and Katie) must navigate the space of the home as Sam would. Gone Home is disconcerting, or curates an uneasy affective state, in that it asks the player to embody a character who is at home, while the player is completely unfamiliar with the space. Rather than this being a moment of unintentional or unavoidable distance in gameplay, this sense of unease allows Gone Home to queer the domestic (which is experienced simultaneously by both player and player character). The game not only places us in an unfamiliar home, it defamiliarizes us with homes in general. This home rarely follows the expected contours of any house we might have experienced in our own lives, or in other games. It is particularly labyrinthine in design, especially with regard to spaces coded as Sam’s: long hallways seem straightforward at first, but quickly branch off into rooms within rooms. Hidden panels and staircases make us distrust the house itself. The first floor and second floor don’t seem to mirror each other properly—the spatial logic feels “off” but not obviously wrong. When we, as Katie, first enter the house, some rooms are locked or hidden without narrative reason—why should the kitchen and dining room be locked, for instance? All of these things require us to spend more time exploring, and in doing so perhaps to focus more on the (queer) narrative by interacting with narrative objects in order to find ways to move through the house. It also causes us to question our assumptions about this house, and houses in general, this home, and homes in general. Gone Home wants us to be uncomfortable, and to sit with a level of discomfort regarding home and the domestic.

The house’s spatial design mimics moments of secrecy and Foucauldian confession in interpersonal relationships; that is, things are only hidden in order to be discovered (Foucault 20-1). This is maybe most apparent in the game’s map mechanic, in which spaces are revealed only after they have been discovered in-game by the player. The map indicates which rooms have yet to be explored, but does not reveal the purpose of unexplored rooms. This continues to do the work of de- and re-familiarizing the player with the domestic space as well as creating a drive to explore the house and “collect” all the rooms. This mechanic is not unique to Gone Home, and is particularly common in first-person horror games. It’s one of many horror mechanics and tropes used in the game—perhaps because in this sense, the work of making something queer is similar to the work of making something creepy or uncanny. Both work to make that which should be familiar unfamiliar.

Players navigate spaces, and are trained by the game to navigate spaces, based on their emotions, which are clearly influenced by genre conventions. As Grant Tavinor notes in “The Art of Videogames,” the player will navigate in-game space differently based on their emotions and affective responses (143)—in games, actions often have narrative consequences, so our perception of the game’s genre changes our navigation of the space in order to achieve the “good” outcome. When playing Gone Home for the first time, the player will likely proceed cautiously, checking corners and peeking around doorways because the game’s creepy aesthetics and horror mechanics have created an expectation of impending danger (or at least impending jumpscares). When players enter the house, they are in the wake of some unknown event, frightened in an abandoned domestic space even before the spooky music and thunderclaps. As many writers on Gone Home have noted, some of the game’s mechanics reference a first-person shooter—but the player character is unarmed. This can only serve to increase the tension of the game’s horror elements: by referencing games in which players must fight or defend themselves but giving players no obvious means of self-defense, the sense of unease is heightened. Katie is not just unarmed, she is disarmed (Bowman 160). 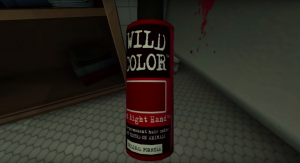 Sam’s bottle of hair dye, functioning both as a reference to queer subculture and as a play on horror tropes in the dye splashed on the bathtub resembling blood spatter.

In Patricia White’s description of lesbianism and the generic codes of horror, she writes that domestic objects in horror “are never simply what they appear to be” (White 140-2). Rather, the house itself represents a danger (such as in the film The Haunting) or the house conceals the secrets of something sinister (Secret Beyond the Door) (Ibid.). By playing on horror mechanics and the uncanny quality of the empty house, Gone Home encourages players to become secretive and uncomfortable in the domestic space. Gone Home trains players based on the mechanics of a genre they’re not actually playing. When players treat it as a horror game because of the affective state it works to create, they will navigate the space of the house differently and perhaps become complicit in their own sort of secrecy, hiding from a danger that will never come. It causes the player to interact with the game in a way that it doesn’t really require—sneaking around an empty house and thereby upending expectations about the domestic.

Bernadette Flynn writes in “The Navigator’s Experience: An Examination of the Spatial in Computer Games” that in-game spatial navigation “is a cultural act where social practice, gender, and ideologies of representation are inseparable for the gameplay event. This cultural act is determined by the kinaesthetic being of the player and its access to the spatiality of the digital environment” (141). Gone Home works to make the player experience space in a way that might be different from their lived experiences or social conditions, and works to disrupt understandings of space. Its ability to destabilize the familiar, and particularly the domestic, works alongside its narrative to speak to and illustrate queer experiences. Meaning, and queer meaning, can come from players and spectators, but here the queerness is located not in the relationship between player and space but in the space itself, as well as in the player’s navigation of the space. Gone Home should be taken as an example of an emerging queer spatiality, unique to videogames and new media, which puts queer experiences in the hands of the player. For some theorists, Gone Home’s queerness unfolds from a new relationship between player and game: a decentering of the player within the world of the game (Bowman 166). This relationship is only possible given the game’s use of diegetic space, and its decentering of the player marks its queerness in relation to its medium and genre.

In all of the criticism Gone Home received for being a walking simulator—questions of whether or not it even counted as a “game” given its encouragement of what some players and critics consider the player’s passivity in and lack of control over the narrative (Kagen 278)—we missed its clever encouragement of a particular spatial navigation, which might even be groundbreaking in forming a new, queer aesthetic and experience unique to videogames (that is, separate from cinema). Early criticism of Gone Home considered the game restrictive. In 2013, Ian Bogost wrote for the LA Review of Books that the game fails to deliver a lived-in world to players: “At worst, it amounts to a complicated menu system for selecting narrative fragments.” Recent scholarship finds similar faults: in theorist Bonnie Ruberg’s account of player movement and queerness in Gone Home, the queerness of the game depends on the player’s decision about their own movement through the space (meandering is queer, while speedrunning is straight)—and that movement is not entirely left up to the player. Ruberg writes that the house’s restrictions (locked rooms and empty hallways) “straighten” the game by restricting player choice and the ability to wander queerly (Ruberg 4, 9). I argue that there is more to Gone Home than narrative, and more to queerness and queer experience than boundless potentialities. Gone Home encourages meandering while restricting it, encourages the revelation of secrets while hiding them, and encourages fear in an uncontested space. The game creates confusion and contradiction, and its queerness is its claustrophobic, labyrinthine domicile. Gone Home refuses utopic queerness, instead welcoming something uncomfortable and strange, but not hopeless. It has earned its place in what will someday be the pantheon of queer games.

Flynn, Bernadette. “The Navigator’s Experience: An Examination of the Spatial in Computer Games.” In The Pleasures of Computer Gaming: Essays on Cultural History, Theory and