Tommy is a game designer and artist based in Toronto. He recently graduated with a Master of Fine Arts in Digital Futures from OCAD University and is currently working on finishing a surreal horror game called The Rawlings.

As early as I can remember, there is a Buddhist shrine carved out of redwood (metasequoia) placed right in front of the entrance door of my family home. As you leave and come home every day, it is the first and last thing you see. On it are three levels; the top level is Guanyin, the bodhisattva that protects peace and tranquility. In the middle are photographic portraits of my ancestors, and on the bottom level is Dizhu Gong, the protector of travel and the land. On each level are intricately placed fruits such as bananas, mandarin oranges and pomelo, incense, an assortment of candy, money in hongbaos (red envelopes) and Chinese calligraphy symbolizing health, longevity and wealth. Lit by a red light bulb, the shrine was always daunting to approach as a child. I was told to ask for its protection and blessings before any major events such as air travel and school examinations, but I never found the right words to mumble to the ancestors and feared its symbolization of death and the life beyond.

As I grew older, and more comfortable with my queer identity, I learned to appreciate the mystique of the structure and embraced it as part of me, my family and my home. When I was struggling with my sexuality as a teenager, I would speak to the shrine every day, confiding my darkest, queerest secrets. To my family, I just appeared to be a good Chinese son, but in reality, I related more to the dead than to the living. To this day, I turn to it when I am in trouble, when I am happy, and especially in times of difficulty and turmoil. The three shelves and all its representations of life and death, the photographs of my great-great-grandparents, the sculptures of Guanyin and Dizhu Gong, the fruits and candies, the money, the calligraphy, the incense are all deliberately staged to create a representation of a mummified corpse. However, this corpse does not represent life and death as the bookends of life, but as constantly communicating with each other: dying is as much a part of living as living is of dying. It is also a structure that gives meaning to living, allowing us to bring to life abstract concepts such as death. It is like a memento mori, but there’s something else about how it is staged, like a tableau vivant, that gives the shrine an animated quality due to all the assigned meanings we gift it with and the way we interact with it. 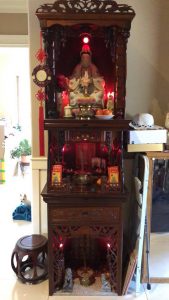 In Camera Lucida (2010), Roland Barthes contemplates the meanings of photography and death through a found photograph of his mother as a young woman after her passing. Barthes suggests that photography is not rooted in painting, but rather in theatre. He begins by describing the tableau vivant, the tradition of creating still images theatrically with live actors, which was Louis Jacques Mande Daguerre’s original profession while he was finding ways to stabilize and fix the photographic image chemically with Nicephore Niepce. Barthes then interprets photography’s relationship to death by way of tableau vivant and theatre as the “figuration of the motionless and the dead underneath” (p 25). In this sense, we can understand that the camera kills its subject by capturing its indexicality with light and chemistry and the photograph is the resulting corpse, rooted in time but without a future. According to Barthes, photographs are made up of two elements, the studium and the punctum. The studium is the cultural, linguistic and political interpretation of the photographic image that draws the viewer’s initial interest to the composition; it is the visual interest of the image. I understand the studium as the inherent experience of death of the image. The other element, the punctum, is more of a personal interpretation of the image; it transcends death to do something quite astonishing to the living. Barthes recounts experiencing the punctum in the photograph of his mother as a young woman as an “accident which pricks, bruises me” (p 38). However, the punctum doesn’t kill, it jumps out at the viewer from the photograph and wounds the viewer, in a way that animates the photographic image. It is the life in the photograph/corpse.

I don’t know my real mother, my biological mother. All I know is that when I was 3 years old, while my father was travelling on business, she left me with a friend of hers and told her friend that she’d be gone for about 2 days, never explaining where she was going or what she was doing that required such urgency. Both my father and her immigrated to Canada from China as refugees and I was born shortly after they arrived. In order to support their new family, my father found work that often took him around the country. My mother, who ultimately got bored of bringing up a child on her own, left me to a babysitter every time my father went away. Eventually, she decided to never come back. My mother now, or my stepmother, once asked me if I wanted to see a picture of my biological mother when I was 18. I remember that day very clearly. She said, “You have her eyes, would you like to see her picture?” I replied, “No, I’d rather not.” To this day I have never laid eyes on the photograph of my biological mother. On the outside, I tell people that it is because I do not care for knowing what she looks like. On the inside, I am scared that in this photograph is a punctum waiting to wound me, summoning ghosts from a past I do not recall, giving life to the mother I have already let die.

Gone Home is a critically acclaimed first person exploration game made by Fullbright Studio in 2014. The game follows a young girl named Katie, who comes back to the empty home after a year of backpacking in Europe. The home is foreign to Katie, as her family moved while she was travelling. Coming home, she finds a note taped to the door from her sister Sam saying she has left and pleads to Katie that she doesn’t go looking for her. The player guides Katie into her alien home, and slowly discovers the reasons behind her sister’s disappearance through interacting with various artefacts that trigger audio journal entries throughout the game. In the end, it is revealed that Sam has run away with her girlfriend Lonnie.

Gone Home has been described extensively by scholars and critics as an important game towards showcasing queer women stories in an industry dominated by heteronormativity and masculinity. One common point many writers of Gone Home talk about is how they thought it was a horror game at first due to the game environment of the abandoned house. I have always been curious at why the space of the family home is often tied to the horror genre in video games because for many queer people, this is a known fact. Domestic spaces are not always safe spaces and are often the original site of trauma. Gone Home subverts the heteronormativity of the family home by forcing Katie (who I assume is heterosexual due to the fact that she is designed with almost no storyline, a default generic game character if you will) to discover the horror qualities of the family home without the usage of zombies. The horror simply comes from an honest portrayal of family dynamics and secrets.

Gone Home is well known for its big queer fan base which has spawned fan fiction and other art forms. One notable example is a fan-made “shrine” of all of Sam’s artefacts that have important ties to her relationship with Lonnie. The fan arranged all the artefacts on the door steps of the house and took a screenshot of it, creating an eerie photographic still life which includes a picture of Lonnie in her army uniform, a handwritten letter, various cassette mixtapes, buttons, a Ouija or spirit board, a bottle of red dye and other miscellaneous objects that are significant to Sam and Lonnie’s relationship. 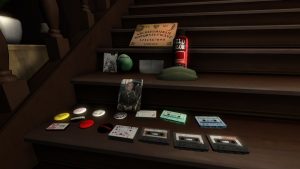 The composition of this in-game photograph is carefully staged and having played the game multiple times myself, this is not an easy achievement as the “drop object” action is more of a “throw object” action. The objects are also set up in a pyramid shape, which holds religious and spiritual significance for cultures across this planet as a sacred shape of the afterlife while the Ouija board adds another dimension of the Occult. This fan made photograph not only pays tribute to Sam and Lonnie, but it is also representative of their eventual death, the death of them as characters, the death of their young relationship and the death of the game once you turn it off. However, in this photograph lies a punctum and for me it is the bottle of red hair dye. Like a shrine, it continues to give new meanings of life after play.

For queer people, digital spaces such as video games provide a safe and enduring space to experiment with identity making because the real lived experience for many is usually one of fear, concealment and death. While the stakes of actual lives being taken away due to their non-normative sexual orientation should never be neglected, there is an established relationship between queerness and death which has metaphorical and theoretical consequences. In No Future, writer Lee Edelman takes a nihilistic approach by stating that queer is the antithesis of future and is therefore, the representation of death due to certain queer people’s biological non-reproductivity. Edelman elaborates that the death drive is inherent in the social, cultural and political order of queerness and suggests that it should be celebrated as queer jouissance. In Gone Home, Sam and Lonnie had to “kill” themselves, their family and most importantly, their family homes in order to live their queer lives.

The fan made shrine to Sam and Lonnie’s serves as a way to make meaning out of their deaths, finding hope and resilience for themselves in the process. In Camera Lucida, Barthes purposes that film represents eternal life while photography represents death. I believe that the medium of video games is something in between. For myself, I turn to video games just as I turn to my family’s shrine, in its playful representation of life and death to find jouissance in my queerness.

[This work was supported by Dr. Cindy Poremba/OCAD University as part of the Camera Ludica project.]