Chris is a recent graduate of Cornell University, where he researched and wrote an undergraduate thesis on the intersections between video games, apocalypse narratives, and literary trauma theory.

At the start of each of Shovel Knight’s nine main levels, the game’s eponymous hero springs in from off-screen and lands on his feet, shovel held aloft, as if to challenge the enemies that await. In all but one of those levels, there seems to be a world outside the one he’s about to explore—a ledge that continues back beyond the edge of the screen, or a pathway that has begun to morph into the cliffs and valleys of the upcoming stage. 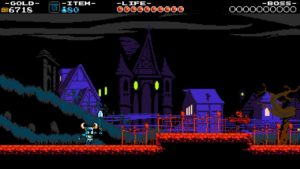 In other words, there is an entrance, a before that in theory he could return to if he so wished. Even though the game itself disallows that particular mode of egress, that indication of a path leaves the possibility open. It gives the thinnest suggestion of potential escape—a comforting hint of simply being allowed to leave.

That may have been why I felt something different when I first watched the game’s titular knight leap onto the initial screen of Clockwork Tower, one of the game’s later levels. Rather than emerge from the emptiness above a ledge, he springs in from behind a solid wall and lands, shovel raised, at the bottom of an enclosed pit. Flanked on all sides by darkened brick, without any hint of return, he begins to make his way upward. 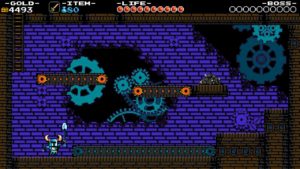 I downloaded Shovel Knight on my 3DS in the summer of 2015, just about a year after its initial release. I had just finished my freshman year of college and was on the tail-end of a depressive episode that had begun sometime that spring. It would take another full year before I’d admit to that—before I’d feel able to acknowledge that, every March or April, as winter slowly loosens its grip on the world, I will inevitably grow irritable and apathetic and anxious at the slightest trigger. Unlike common portrayals of seasonal depression, my episodes can linger well into the summer. As the weather grows warmer, I stay the same—inevitably relearning that no, it’s not just the temperature, or the wind, or a stubborn April chill. It’s me.

That July, Shovel Knight was an impulse buy. Beyond a few 3D Mario titles, I’d rarely explored any style of platformer, and I had little ingrained nostalgia for the game’s deliberately retro art and design. But it was cheap, and it was colorful, and, despite the summer sun, I had remained sequestered in the strange, listless state that had carried over from the spring. Anything seemed worth a shot. Why not this?

If Clockwork Tower has a single overarching motif, it would be motion. It begins with conveyor belts speeding or slowing movement in a given direction. Then come shifting platforms, and rotating cylinders, and ledges that burst from walls, hang still for a moment, and retract back in. Its earliest enemies look like mechanical wind-up rats, rolling back and forth along their programmed paths. Another species of enemy shuffles along its ledges and shoots cogs in circular arcs, while little furry monsters hover inexorably closer to the player.

Then, higher up the tower, missiles begin to appear, traveling in sine waves from one side of the screen to the other. Cracks in the background wall reveal endlessly spinning cogs and rhythmically pumping pistons. The stage’s secret item, the Mobile Gear, gives Shovel Knight his own moving platform just as auto-scrolling sections render it obsolete. And the final sequence combines all of this—conveyors, rotating platforms, emerging ledges, arcing missiles—with a constant march upward towards the stage’s inevitable boss fight. While most of Shovel Knight’s other levels present static spaces and momentary bursts of movement, the insides of Clockwork Tower seem to be in constant flux—moving with unerring precision through their predetermined motions, oblivious to the interloper in their midst.

When I first played through Clockwork Tower, I don’t remember if I instantly made the connection between its themes and the depression I’d spent the previous months struggling through. In hindsight, it seems too serendipitous a link to build in that initial, instinctive playthrough. But there were moments in that first encounter when I did feel something strange—where some part of me saw my experiences translated into the simplest elements of design in an outwardly simple game. I was placed inside a tower with no way back, no avenue to return to the place I was before. The only choice was to climb—to make my way through a constantly moving machine that did not care about me or my objectives, that ran in a fashion so predictable that its function became inscrutable. I was tasked, as I am in all platformers, with traversing and mastering a space.

Only here, that space seemed to mirror something I had not, would not, and will never fully master in my own life. It spoke to an endless cyclicality in its background and foreground, to a journey made against the motions of a largely indifferent world. Even its musical theme, “Of Devious Machinations,” embodies that motif; its melody begins low and subdued, a series of notes backed by gearlike clicking and grinding. Then, as the track progresses, the same series repeats itself higher and higher up an octave, like the music itself is climbing the tower as well. That melody contains a series of falls, notes dropping by small second intervals, vanishing and reemerging higher up, building, building, building but holding to that minor, melancholy tone, until they finally collapse back to their initial point. Despite its best efforts, the music never seems to escape itself either; like the stage’s elements of motion, it remains trapped in its own cycle of repetition—locked, like everything in Clockwork Tower, in an endless, Sisyphean battle upward. Even when I listen to it removed from its context, it calls back that feeling of futility, of fighting upward despite the thought that, in the end, everything I’ve built may just come tumbling back down.

Ultimately, counterintuitive as it might seem, that analog grants me a space to work through those times of apathy or sadness. In a way, it alleviates the isolation that comes in those moments and presents a world that I can master in place of one that I can’t. When early March comes around, until the seasons change and that mental fog finally lifts, that space gives me exactly what I need.

When I chose a college, I picked one four hours away from home. As a result, every break, I take two long bus rides back and forth—down one long highway across two states, through stretches of tiny towns and beautiful wilderness, occasionally broken by a small city or two. For the most part, those rides are quiet and peaceful: chances to read or catch up on work as the world passes smoothly around me. But sometimes, that motion stops—a traffic jam, or a nearby accident, both inescapable parts of highway travel—and I have to close my eyes and quell the thorns rising in my stomach. Until we start moving again, I become a mass of sweat and nerves. I can’t define that anxiety any more than I can explain the switch that invariably flips in my head every spring; all I know is that, when the world around me stops moving, I feel helpless.

In a similar way, the same constant motion that gives Clockwork Tower its atmosphere of monolithic indifference becomes, for me, soothing. It gives me feedback to push against, and a consistent feeling of progress despite its setbacks. Even as it shuffles me over a ledge or into a hazard, and even as its music climbs through its predictable, expected cycle, I see patterns forming—ways to manipulate the motions of its space to continue that climb. Its movement is predictable in the way constant motion on a highway is predictable: rarely speeding up or slowing down, holding to the same frame of reference. Over the course of that ascent, the same elements that at first mimic my depression become my tools of release.

And of course, Clockwork Tower’s cycle can ultimately be broken. Despite its opening screen denying the possibility of escape, defeating its boss—Tinker Knight—will carry Shovel Knight back out onto the world map. But even that boss fight puts a twist on the stage’s hidden nature; unlike every other member of the Order of No Quarter, Tinker Knight’s fight happens in phases, and its second phase drops Shovel Knight into a pit much like the one from which he started the stage. It’s a final overture to the level’s cyclicality—it ends as it begins, in a pit with no clear method of escape, challenging the player with one last climb. Only now, instead of crossing some conveyor belts and scaling a ladder, this fight has the player leap over missiles and bombs onto the shoulder of a massive mecha. Yet, it still feels like a fitting bookend to the stage’s themes; we begin and we end at the bottom of a hollow, able only to make our way upwards. There is no view outward, no sense of the wider world, even at the apex of the tower. While the Flying Machine—another stage that takes Shovel Knight high above the ground—gives as its background a beautiful orange sun flanked by glowing clouds, Clockwork Tower shows only its interior: its gears and pistons and infernal machines visible through cracks in its inner walls. It closes us off, traps us within its darkened realm, and hides all possibility of escape. And even if we forget that once we’ve left—once we’ve returned to the bright, colorful art of the game’s world map—it remains there, its illusions intact, waiting to be attempted again.

When I turned twenty-one, a little over a year after I first played through Shovel Knight, I got my first and only tattoo: the chemical structure of a serotonin molecule, inked on the inside of my left wrist. Most of the time, it’s covered by a watch, with one small line and loop protruding from beneath the band. It is, simultaneously, a very public and very private spot: a stretch of skin that I can easily cover, and an image that makes little sense without context that only I can give. It sits above the vein that carries my pulse: sometimes a reminder of the interconnected systems at work inside my mind and my body, and sometimes a memento of times when those systems lost their essential rhythm. When I fall into depression, it reminds me of the physiological dimension that becomes so easy to forget; when I come out, it reminds me to make the most of my time, to enjoy what I have available while those molecules are at their best.

And likewise, replaying Clockwork Tower now carries a much different feeling than it did in that initial playthrough. Rather than struggling to control my momentum through each sequence of obstacles and platforms, I now know how to chain my actions from one to the other, using motion to my advantage. What was once a gauntlet has now become a playground: a chance for me to experiment with the game’s mechanics in a stage that moves and shifts around me. Earlier, I discussed mastering a space that mimics something unmasterable, and ultimately, in mastering Clockwork Tower, I’ve left its core metonym behind. Instead, it’s become another memento: a reminder not only of the core feeling of depression, but of its hidden escapability. In the end, even when it seems like there’s no way out, if I keep climbing, moving with the motion of the world around me, rolling with its punches and managing its forces, I’ll find one. I always have. And even if I encounter it again—if I restart that level and find myself returned to that closed-off starting screen—I always will.