Dylan Armitage is a graduate student in the Cultural Studies program at the University of Winnipeg. Dylan’s research focuses on digital media industries and cultures; he investigates digital media such as video games, social media, and online intermediaries.

Dark Souls (2011-2016) is a challenging experience but also one that is solitary and quiet. The only sounds heard for the bulk of my time in Dark Souls were monsters wheezing, weapons clanging, and my character grunting in pain or death. When I pushed through a fog gate into a boss fight for the first time, I knew a special experience awaited me: not only was I facing down a considerable challenge, but music had also flooded into the space. The aural landscape shifted from being solely inhabited by diegetic noise to a mixture of diegetic and non-diegetic sounds.

Aurally speaking, the term ‘diegesis’ refers to sounds whose source is visible on screen or explicitly exists within a text. In contrast, non-diegetic sound is any sound whose source is either invisible or not otherwise implied to exist within the realm of on-screen action. The presence of non-diegetic music provides players with an understanding of how they must navigate spaces of play; this works inversely in the rest of game space as the omission of non-diegetic music encourages the player – and their attention – to wander freely.

Jonathan Sterne’s essay “Sounds like the Mall of America: The Architechtonics of Commercial Space” (1997) provides an apt analogue to Dark Souls through his analysis of how sound constructs space while also hailing and managing people into and within these spaces. This essay examines the peculiar presence of non-diegetic music in Dark Souls through boss fights as well as its omission in the bulk of game space and how this affects player attention and experience.

“The Architechtonics of Commercial Space”

Using the Mall of America as his case study, Jonathan Sterne discusses two types of music: background and foreground music. Background music inhabits the mall’s non-retail spaces: the entrances of the mall, hallways, and bathrooms. This music, referred to as “Muzak,” is stripped down symphonic jazz arrangements of popular music, but with any distinctive elements, like vocals, removed. This music is meant to be heard but not attentively listened to; its various elements are somewhat familiar, yet purposefully made indistinct. In contrast, foreground music – that of retail spaces – is meant to be recognized and to reflect a particular identity associated with the space it occupies. While the soundtracks for each store vary in content, theme, and volume, sound plays a similar identifying role in constructing the experience of each space. Speaking on this contrast, Sterne states:

“the acoustical space of the Mall is structured around a central musical tension: the quiet, nondescript music in the hallways contrasting with louder, more easily recognizable and more boisterous music in the stores.” (Sterne, 1997: 29)

In this sense, hallway music is meant to not draw attention to itself while music in stores functions to pull and focus attention. This lack of a distinct identity for hallway music functions precisely to allow attention to be drawn towards other commercial spaces; Sterne notes that the loud music of stores spilling out into the mall hallways effectively draws people inside the store spaces. Sterne terms the point at which someone can hear the music of a store from the hallways a “sonic threshold” which “behaves as a store’s front wall. Through clear acoustical delineation, the music produces a sense of inside and outside” (Sterne, 1997: 32). Once someone crosses this threshold, they are met with specific soundtracks catered to specific experiences. In this case, sound helps in framing the experience of the store’s brand and the consumption of goods towards specific tastes and desires. Borrowing from Stuart Hall, Sterne defines this process as “articulation” which he describes as “the process through which otherwise independent meanings, ideologies, or people are unified in some sense” (Sterne, 1997: 40). In sum, the music in each store provides a template for experiencing its space while also serving as a means to gather, direct, and articulate attention.

In Dark Souls, sound is used to manage and focus player attention in a manner similar to that described by Sterne. Instead of background and foreground music, space is sonically structured through the presence of non-diegetic music in the various nexus areas and boss fights, as well as through the omission of non-diegetic music in the open-world areas of the series. This widespread aural omission is vital to the open-world nature of exploration present throughout the game. Yui Tanimura, the director of Dark Souls 3, notes in an interview with Destructoid that:

“Because this game involves paying so much attention to your environment, to your surroundings, not just visually, but with sound, we felt that the implementation of music outside of the boss battles would get in the way of the actual strategizing throughout the game… But for the boss battles, the music obviously helps pump up the situation!” (Destructoid, 2016).

In her book Game Sound, Karen Collins speaks on the considerations that go into the audio production process of game development and notes that “there is a rhythm or movement within a level or game in terms of emotional peaks and valleys” (Collins, 2008: 92). In this sense, the peaks of Dark Souls are seldom and its valleys wide. In open-world areas meant for in-depth exploration, Dark Souls forgoes the use of non-diegetic sound even though there are enemies present, as background music would draw the player’s attention away from the proscribed space. These spaces, the emotional valleys that Collins speaks of, are analogous to Sterne’s analysis of mall corridors: they contribute to a “musical tension” in that they are purposely sonically unremarkable to contrast with and direct the player towards the curated experiences of proscribed spaces.

A lack of distinct sonic structure provides no aural distraction, allowing attention to be directed freely. In the case of a mall, this allows for attention to wander towards different stores. In Dark Souls, omission also promotes storytelling through exploration, specifically in the dissemination of lore through the search and discovery of in-game items and their accompanying descriptions. 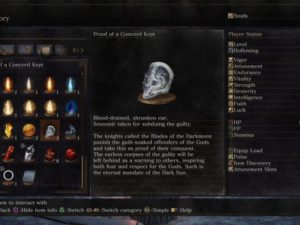 As the player gathers items, they learn more about characters and their connections to locations where they were found. This is also done through environments, such as the Profaned Capital in Dark Souls 3. The player seeks out the ruler of the Profaned Capital who linked the flame in hopes of extinguishing the profaned flame of his home, but instead killed all of his citizens. The result is left plain to see when the player arrives and they’re greeted by grand but crumbled architecture accompanied by mounds of bodies as they have been melted and molded together by the flame, leaving the ruler to wallow in plain sight of his mistake.

When Dark Souls does use music, it uses it to say something about the space which it occupies as well as the characters and expected actions within those spaces. Nexus areas, for instance, are often the first major area the player encounters after the tutorial section. 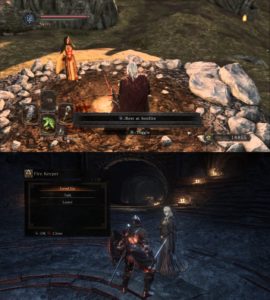 These nexus areas are not transitional spaces like the open-world, whose purpose is exploration: instead, these spaces operate as safe zones.  This is communicated through the presence of a slow, dulcet non-diegetic soundtrack. More importantly, the presence of non-diegetic music indicates the actions intended to be undertaken within the space. While interaction with the open-world of Dark Souls is left to the player’s interpretation, nexus areas serve as semi-structured spaces meant for respite and contemplation. Here, players can speak with non-player characters, elicit tales of their own lives or the world at large, take time to buy and sell items, upgrade equipment, or level up their character. The semi-structured nexus areas coupled with the omission of non-diegetic music in the open-world provide apt contrast to the heavily structured sonic spaces of Dark Souls’ boss fights.

Whereas the nexus areas’ contemplative soundtracks gesture towards their semi-structured nature, Dark Souls’ boss fights employ more raucous soundtracks accompanied by a physical threshold to construct a more distinct experience. As the player transitions from the open-world to the enclosed space of a boss fight, they are often confronted by a fog wall, essentially serving as a physical manifestation of what Sterne called a “sonic threshold.” In Sterne’s article, these thresholds are purely aural, but the fog walls serve a similar function while also being a physical barrier that the player must interact with. Analogous to the entryway of mall stores, this threshold separates boss fights from the rest of the game while also serving as a literal front wall for the fight. Crossing this threshold indicates a change in intended action: the soundtrack kicks in and free-flowing attention and interaction is replaced with a singular focus on the task of defeating the boss. In some cases, fog walls don’t even exist in certain cases until the player has initiated the boss fight – which also initiates the soundtrack. 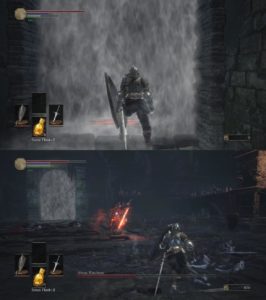 Once the player has died and returned, the fog wall appears to indicate that the space has been aurally altered, and the player must cross its newly created sonic threshold.

In contrast with the open-spaces of Dark Souls, boss fights and their soundtracks compare directly to the curated experience of a mall store. These spaces serve as the climax of each area, one that the player repeatedly attempts to overcome, and the juxtaposing sonic composition of the area leading up to the boss cements this structuring. Players must traverse the silence of the open-world areas and when the player fails – which is often the case in Dark Souls – they are forced to repeat this journey as they are beckoned towards the sonic space of the boss fight. The spaces between bonfires and boss fights become increasingly transitional as the player makes repeated trips back and forth; they are aware of where the area’s climax resides and are funneled towards it. Not only does this emphasize the brevity of boss fights, but with increased exposure to each individual boss soundtrack, players become more attuned as to how they should behave in these spaces.  Like stores in a mall, the presence of music in Dark Souls provides a means of articulating the experience of particular spaces.

When speaking on the territorializing effects of rock music, Lawrence Grossberg states “music … calls forth our investments and hence, our affective anchors into reality” (Grossberg, 1991: 364). Whether it is the orchestral scores of a boss fight which requires a player’s full and focused attention, the calming tunes of nexus areas, or the complete lack of music in the journeys in between, the presence of non-diegetic music is used in all cases with very certain intentions. Pointing out how music is present or omitted may not seem vital when talked about in isolation, but in the examples demonstrated throughout the Dark Souls series it is evident how non-diegetic sounds feeds into many facets of a game’s intended experience. While the study of the uses of music in game design is nothing novel, this particular line of thought – theorizing and thinking about games acoustically specifically in relation to space and attention management – merits further inquiry on the part of scholars and players alike.

Collins, K. (2008). Game Sound: An Introduction to the History, Theory, and Practice of Video Game Music and Sound Design. Cambridge: The MIT Press.

Napolitano, J. (2013). “Why Dark Souls doesn’t have music outside of boss fights.” Destructoid.