“Is 2016 The Year of Virtual Reality?” Chris Morris asked in 2015 in an article for Fortune. In June of this year, Brian Crecente writing for Polygon magazine declared 2016 “both the peak and turning point of virtual reality”. The sense that the crest of VR’s popularity may have already peaked was the idea behind this month’s podcast, in which our participants Betsy Brey, Rob Parker and Justin Carpenter revisit the question with only a slight revision: was 2016 the year of VR?

Our podcast participants perform a small dive into the VR industry, engaging in a critical interrogation of VR affordances and contemporary VR design while enjoining designers to do the same. They outline their concerns with VR technology, including their experiences with motion sickness and disorientation, raising questions about pleasurable and unpleasant immersion.

Their discussion suggests that as a speculative design and technological affordance, VR has yet to reach mass market potential, limited by the lack of VR-intended titles. The solution they point to is less a need for a killer application and more a call to explore the unique affordances of this technology. The current challenge is the challenge of any new medium: the remedial remediation trope, in which the content of a new medium is initially the form of an old medium (Bolter and Grusin). In lay terms, developers are yet to deliver a title that impels players to demand “I need this in VR”. Even the success of Resident Evil VII was attributed to the strength of the game itself more than its VR mechanics.

So where does horror fit into the mix?

The majority of our panelists’ VR experiences were with horror games, including Spooky’s Jump Scare Mansion HD Renovation and Resident Evil VII. Even the way they spoke about their experiences playing VR seemed more akin to horror film scripts: groping along the table in the dark to find the keys, slapping at the controls in a panicked frenzy, stifling urges to scream. Is horror a natural corollary for VR or just ideally suited?

Though the participants in the podcast suggested these cumbersome controls were problems for the industry to overcome, the language by which they describe their experiences suggest VR is an ideal technology for horror simulation. What’s scarier than a monster you can’t outrun? A monster you can’t properly run away from. Could helplessness in the face of wonky controls enhance or distract from the VR experience? Sloppy control mechanics are a poor substitute for psychological dread, but perhaps horror VR games could embrace this discombobulation for greater effect. Is horror capable of delivering on the as-yet-unrealized potential of VR?

Towards the end of the podcast, the panelists asked each other if they could name any other VR titles that were not from a first-person perspective off the top of their heads. They were at a loss. The moment was the capstone to a broader challenge in planning for this month’s podcast. Quite simply, when we settled on the subject of VR, we had a hard time naming titles beyond a few first-person horror games.

This impelled me to research what mainstream games journals tout as the future of VR games. As it happens, just this month, TechRadar.com released their list of “The 25 best VR games for PC, consoles and mobile”.  I compiled data from TechRadar‘s list into three accompanying charts. (The information is taken from TechRadar, the data and graphs, including whatever errors and omissions, are my own).

The figures offer a useful perspective on the scope and limits of the VR games catalogue. While the majority of popular VR games might seem like horror titles, horror actually accounts for very little of TechRadar’s list. VR is instead quickly becoming positioned as the realm of first-person shooters and puzzles (see figures 1 and 2), a reification of both the visual and the individual, regardless of the platform. (For those counting at home, there’s four so far: PlayStation VR, HTC Vive, Oculus Rift and Gear VR, with many of the most popular titles available on multiple systems–see figure 3) 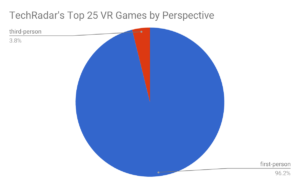 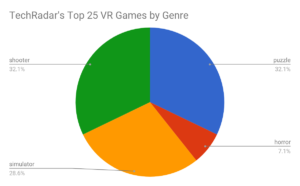 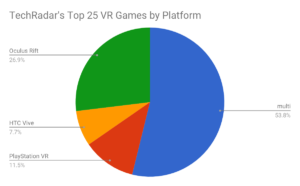 In 2015, Ben Schachter of Macquarie Group, an investment capital firm based in Sydney, Australia, cautioned that “Only after 2016 will the VR/AR game begin” (Morris). What does this future bring?

Games of course. Among the 18 VR games anticipated by TechAdvisor.com set for release in 2017 and beyond, 15 were first-person games (including 6 shooters), two were strategy games that offer a bird’s eye view of the game board, and one game uses eye-tracking sensors to move your on-screen avatar. The remainders are two big-budget ports from Bethesda and four horror games–including the obligatory zombie game.

Our podcast participants reflected on innovative horror game designs, and in the process suggested an untapped market for horror game remasters as VR ports (among the titles they dropped was the dearly departed P.T., and other games in the Silent Hill series, namely Silent Hill 2 and Silent Hill: Shattered Memories, as well as System Shock 2, and the Fatal Frame series).

Speaking of innovation: next year promises lighter headsets (designed and tested with heads belonging to more than just 30-year-old men!), VR-designed control schemes and novel integration–if not new applications. Often when I hear about the latest developments in technology and games I’m reminded of Atari’s disastrous Rubik’s Cube game released in 1982 for the Atari 2600, and often when I hear companies touting innovative developments of VR games I wonder whether they’re needlessly complicating an activity that is already complex enough. I imagine there will soon be VR cinemas and 3D VR live theatre, too. But where does all this visual reality leave people with monocular vision, or partial blindness?

While I commiserate with the podcast participants about the neglected use of sound in both VR software and hardware, as someone who entertains total deafness in one ear the promise of immersive 3D sound isn’t all that alluring to me. This is not to say I’m indifferent to innovative aesthetic uses of sound, only to wonder whether immersive sound can remedy VR’s indomitable emphasis on the visual. As Betsy mentioned, VR design remains firmly fixated on a “visual bias”.

The future heralds new technologies too. Microsoft has entered the VR game with their HoloLens, a head-mounted display with a tinted visor that can project images for both AR and VR functionality, though the company touts the HoloLens more as a mixed-reality technology than an actual VR competitor. The base retail unit costs $4000 CAD, with applications geared more towards art and business than games. Think of it this way: whereas the VR headset consumes the real in producing the virtual, the HoloLens subsumes the virtual within the production of the real. Thanks Baudrillard.

The VR craze has subsided, the hype left unsatisfied, while the tech endures. Yet, the ramifications of VR’s technological affordances remain to be understood. Nonetheless, we’re becoming painfully cognizant every day about the effects of uncritical media consumption and the role media technologies might have to play in promoting homiphily among user groups. Many games enthusiasts and even some economists expressed concerns that Facebook’s acquisitions of the Oculus Rift would kill the potential for VR. But given Facebook’s lackadaisical response to Russian hacking manoeuvres, which remains so inept as to border on complicity, isn’t there a bigger issue for concern?

“Oculus has the chance to create the most social platform ever,” according to Mark Zuckerberg, “and change the way we work, play and communicate” (Kovak). I believe him, and that’s what scares me. With a profusion of VR mobile phone applications, no longer would the fake news and propaganda be confined to your screens, it would fill the space around you. Perhaps we should take a slight pause before we overwhelm our senses entirely with these new virtual reality technologies; at least until we have a better understanding of what realities are being built for us, and what effect they will have upon our cognition and sociality.

VR may not be the future of all video game design, but it will certainly remain a complement to video game development for the foreseeable future.