Taif was born in Iraq and immigrated to Canada in 2014. She is currently three months away from graduating with an English MA Degree from McMaster University and hopes to use the summer after to catch up on her gaming, amongst other things.

In constructing an immersive experience for its players, Journey gives its in-game space a starring role. In the absence of text, voice acting, and general lack of traditional narrative exposition, players wishing to draw out the game’s story are to depend solely on the game’s spatial design. Journey starts with an unidentified protagonist in an unidentified land. A cut-scene brings a distant mountain into the players’ focus, marking the mountain as an end destination. The players then spend the entirety of the game crossing the distance between the starting point and the mountain while making sense of the game’s story through engaging with the game world. Journey’s bringing spatial experientiality to the fore as a powerful element for entertainment opens doors for an immersive gaming experience. Immersion into Journey’s gameplay is achievable for willing players due to the game designers’ implementation of in-game space that facilitates its own internalization and inhabitation by the players.

Since video games are largely concerned with spatial representation and negotiation (Aarseth 154), it comes as no surprise that immersion in a video game would be defined as “the degree to which the player feels integrated with the game space” (Taylor 12). For players to be immersed into a game, the game needs to first have a consistent world. Consistency of game worlds does not mean their adherence to the nature of actual space. It means, rather, that the spatial design demonstrates its ability to hold together a game world as logically befits the game at hand (14). For players to observe a game’s spatial consistency, the game’s interface has to ensure the ease with which players interact with the game world (14). If players do not have to constantly refer back to their controllers or keyboards to execute an action, or if players are not constantly puzzled by the dynamics that tie their actions to the reactions in the in-game space, or if players are not distracted by onscreen information, then players could focus their attention on the game’s spatial design and be pulled in by its consistent implementation (15). 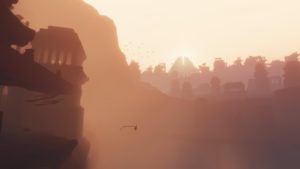 To facilitate immersion into players’ game experience, Journey keeps its interface simple. The actions that require players to use their controller are 360- degree movement using the PlayStation controller’s left analog stick, flight using the X button, and communication via a chirping sound using the O button. In addition, the relationship between players’ actions and reactions in Journey’s game world are limited to reactions from encountered creatures and engraved markings, which respond to the player-character’s proximity or chirping sound. Finally, the game does not make use of any heads-up display, choosing to rely entirely on diegetic information. All players see is their avatar in the game world designed for them to experience. Therefore, it seems that Journey aims at easing players’ game interface internalization and thereby increasing players’ chances of getting immersed, not only into playing the game, but also experiencing and exploring the game space.

In order to create a game world that lends itself to exploration, designers must balance navigable space and representational space most purposefully for the game’s objective. Representational space is in-game space that is inaccessible to players and acts only as a visible representation of landscape. Navigable space, on the other hand, is space that is not only visible, but also accessible to players, and can even be influenced by players’ actions sometimes (Guenzel 180). As is the case in Journey, the presence of representational space that extends beyond navigable space adds to the believability of the game world being a habitable space rather than a set of environments interruptedly linked to one another (Calleja 87). Conversely, navigable space’s accessibility foregrounds interactivity between players and the game. Since player interaction with Journey’s in-game space is limited to running, flying, and making chirping sounds, movement constitutes the major part of players’ spatial experience in the game. Indeed, our conception of space depends on both our visual perception of it and our perception of our movement around and with other bodies in space (Mosca 1). For immersion to occur then, players need an embodied visual representation within the game space. Therefore, Laurie N. Taylor argues that “the game perspective must be at least episodically third-person” (24).

Third person POV facilitates an immersive in-game spatial experience because it presents players with an embodied singular representation within the game space (27). It could be argued, however, that a third person POV distances players from their character’s spatial experience since the two do not share spatial perception (28). Taylor adds that such an argument and others that defend first person POV’s closeness to human conception of actual space forget that perception of movement, both ours’ and other bodies’, in space is crucial to our spatial experience. To be sure, embodiment is not only about seeing, but also about seeing within a context that extends beyond visual perception; humans possess perceptual abilities that allow them to sense movement behind and beside their bodies (29). It makes sense then that the richer view made possible by a third-person POV provides a better translation of these perceptual abilities (30). In third-person POV, as is the case in Journey, players can see their own movements contextualized in relation with other bodies’ within the in-game space making it easier for players to inhabit the game world and engage with it. 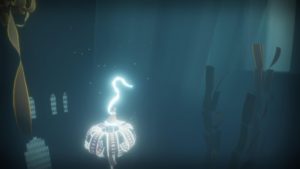 Once players inhabit the game world, they explore and internalize it through cognitive mapping. Gordon Calleja writes that “the cognitive map is thus a mental model that accumulates and organizes spatial information into a coherent, internal image that facilitates both learning and recall” (79). This means that as players explore uncharted territories in a game world, they internalize these spaces, and construct a mental map that helps them navigate their way around. Depending on the information gained, this cognitive map gets constantly updated. Journey does not depend on any in-game visual aid that introduces the game’s world to players other than the game world itself. Instead of maps to guide players’ journeys, there are only scattered ruins, open lands, hills, sand, and skies. As players navigate their way through, the sense of connectedness they feel to Journey’s game world is largely influenced by their spatial navigation’s complete dependence on the actual journeying. The absence of interface that mediates the relationship between players and the in-game space results in an immersive experience that encourages players to internalize and inhabit the game world through exploration.

A technique to make spatial design legible for exploration would be to create spaces with spatial characteristics distinguishable from one another while maintaining consistent logic behind such distinguishability (Calleja 89). Games with coherent and distinguishable regions allow players to familiarize themselves with the game world, establishing a sense of connection with it that leads to players’ learning the in-game space and internalizing it. After the virtual environment becomes learned, players invest less conscious attention to navigation (90). Interestingly, such internalization process leads to the virtual environment to become inhabited, and creates a sense of belonging in players (87). One of Journey’s chief assets is its distinguishable regions. Be it the ever changing color of sand or the number and type of creatures players encounter, the different regions in Journey are easily identified and differentiated from one another. Journey’s spatial design provides players with a game world that looks believably open, yet highly coherent despite its varied aesthetics per region.

Journey’s immersive spatial design, which allows players to both internalize its components and inhabit its world, culminates in its telling the story of its own experientiality. Henry Jenkins writes about different spatial narrative techniques possible for game worlds to adopt, and the one relevant in Journey’s case is embedded narrative (Jenkins 8). An embedded narrative is when the architecture of the game world traces in its structure a pre-determined story that is to be discovered by players (9). Ruins, which Journey’s game world is rich in, carry an embedded narrative, no doubt, and yet, if internalizing and inhabiting Journey’s game world thus far has primed players for anything, it would be to view ruins as Elizabeth Scarbrough suggests we do.

Scarbrough argues that ruins could be viewed as memento mori, as reminders of lack, but they could also be appreciated for what they are rather than for what they once were (446). To engage aesthetically with ruins does not require placing value on how and what the buildings originally were. No historical knowledge is required for us to engage with ruins either (447). In addition, Scarbrough agrees that the nostalgia that ruins evoke is important, but so is ephemerality (448). Therefore, she suggests that focusing our attention on the past when engaging with ruins could rob us from the opportunity to appreciate them in the present-tense. To experience ruins in the present-tense is to put our imaginative reconstruction of the past on hold and engage with these structures as aesthetically valuable experiences in and of themselves (448). Indeed, players’ experience in Journey depends on a present-tense approach. Given no story exposition, players engage with the in-game space as it is. Players’ navigation of and interaction with Journey’s in-game space mainly depends on the space design itself and how it lends itself to the players’ internalization and inhabitation. Players’ aesthetic involvement with Journey’s game world is exemplified by ruins to whose past we have no access and yet to whose affect we are still susceptible – when willing. 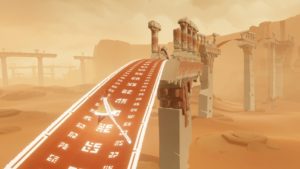 Certainly, willingness by players to participate remains an essential requirement for spatial experientiality. Despite the availability of a game world that could be internalized and inhabited, players could still set for themselves goals that do not require players to engage as attentively with space, such as meeting new players via the multiplayer option; or they could simply decide to ignore all the criteria for an immersive gameplay (Taylor 30). Thus Journey’s and any other games’ spatial experience depends on players who are willing to be drawn in by the game designers’ plan for them. Nevertheless, it remains possible to see that Journey’s spatial design provides ample opportunities for gameworld internalization and inhabitation. The game’s space may be internalized through minimal interface, cognitive mapping, and distinguishable regions. It may also be inhabited through the third-person POV, the believability of representational space, and freedom of movement within navigable space. In addition to an immersive spatial experience, Journey embeds a narrative within its spatial design, namely within the structures of ruins, which reflects players’ journeys through the game world. It is a narrative of engagement with space as is, engagement that is free from limitations of time and requirements of prior knowledge, engagement that relies on presence. Indeed, for willing players, Journey is immersive and re-playable because it is a game about experiencing the spatial world in the present-tense.