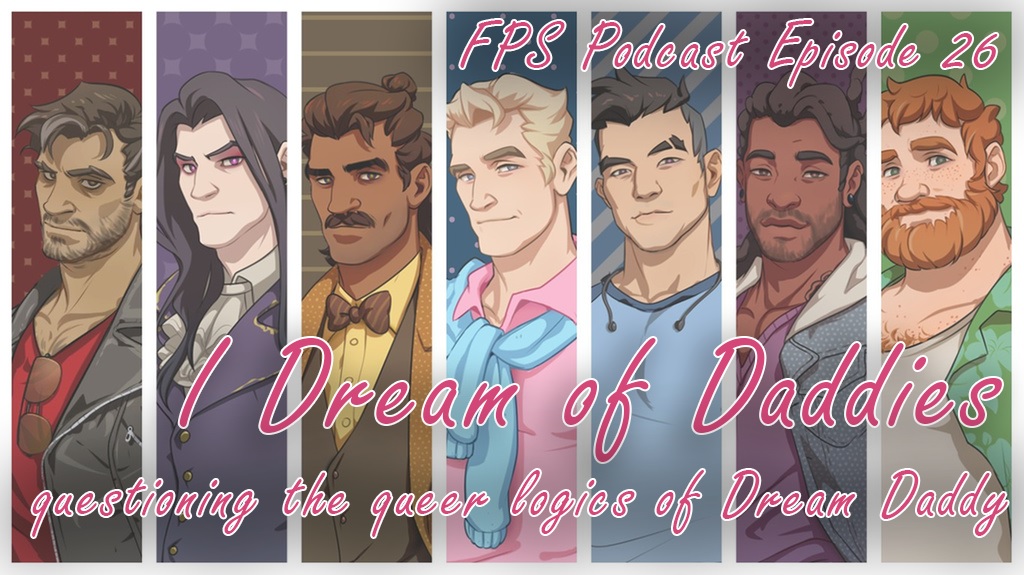 In this month’s podcast, we discussed Dream Daddy, an interactive visual novel developed and published in 2017 by Game Grumps that describes itself on its Steam storefront page as “a game where you play as a Dad and your goal is to meet and romance other Hot Dads”. So far, so good. Given the dearth of games catering to explicitly queer players, the FPS staff were naturally thrilled to have such a game and were eager to sit down to discuss it. As a bunch of gay and queer-identifying scholars, some of whom conduct research on queer representations in media objects, we had much to discuss about this game. While praising the game’s merits, including its diverse cast, focus on queer romance, and inclusion of a trans character, we consistently found ourselves undercutting that praise by noting the conspicuous absence of roles, opportunities and content in the game.

The first and overriding issue we addressed in the podcast was the game’s prudish logic. The issue is not that you see only one type of sexuality in this game, it’s that you cannot properly engage in any kind of sexuality. Nor do the game’s characters couple in any significant, intimate or pleasurably erotic way. In one extreme reading, sex in the game disregards the need to look at and negotiate sex or genitals, in the most generous, it doesn’t bother with the dynamics of queer romance. Any interpretation highlights a curious approach to the plurality of queer intimacy for a game that purports to be a queer dating sim.

Dream Daddy also bills itself as a parenting simulator, and while we appreciated the humorous and witty interactions with Amanda, we noted how the game doesn’t allow you to be a bad parent. Even where your choices are ostensibly cruel, your responses offer some measure of equanimity. As we noted in the podcast, the game writes the right responses even in the worst situation. While it’s nice that the game didn’t show queer parents as incompetent, or worse, it nonetheless depicts a fantastical scenario in which queer parenting is nothing but puns and barbeques with other queer parents. Granted, some of their relationships with their children present some troubled relationships, but the game seems to go out of its way to insist the kids are all right. Admittedly, the title should have been our first clue, but the game’s lopsided approach to queerness in every aspect rang conspicuously hollow at times.

These omissions tie into a broader question we discussed related to the game’s unwillingness to represent the difficulties of queer life. The game admits of no controversy, permits none, and so, in the process, may have actually courted it. Can we read this utopian space as a slight in the face of the daily struggles queer people face, particularly queer youth? (Those same youth who still rely on disembodied heads to assure them via video that ‘it gets better’?) Is this utopian dream space a model of that better life or a perverse fantasy that devalues the issues it sidesteps?

Answers to these questions rely on answers to yet another question: who is this game designed for anyway? Throughout the podcast, we found ourselves asking, and Eve, Matthew and Betsy agreed it felt designed for cis, heterosexual women moreso than queer people.

Throughout my encounters in the game, I wondered for whose gaze it existed, since I certainly didn’t feel like it was for mine. I use the term ‘gaze’ consciously aware of its implied logic of control and power over that which is surveilled. As I mentioned in my review of Rated M for Mature for FPS (Matthew Wysocki and Evan W. Lauteria, eds), modern scholarship on sexuality in games circles these tensions between looking and not looking, being seen and not being seen, which impels a broader cultural question about whether representation is necessary. In Gaming at the Edge, Adrienne Shaw suggests that it might be desirable but not necessary, which has led to some critical responses. Finally, we have a game that purports to offer queer romances as its raison-d’etre, yet it persistently and defiantly resists invoking any of the quotidian contiguities of queer couplings. We cannot choose to talk about sex in this game or to interact with the pluralities of queer intimacy. In place of sex, we get a Hays code blackout: the scene literally fades to black at the trace of any eroticism as if we were swooning at the thought.

In Gaming at the Edge, Shaw offers a similar rebuke of these sorts of tactics in simulation games, noting that “the emphasis on player-created content allows for the illusion of diversity in game texts. Many of these games capitalize on pluralism without making the games diverse in a way that would actually matter in a socio-political sense” (217). Is it fair then for the game to bill itself as a ‘queer dating simulator’ if it blacks out and blocks off problems in and faced by the queer community?

I wouldn’t go so far as to insist Dream Daddy preys on a market sorely lacking in queer content, but as Shaw puts the problem in the context of an early game touting the possibility for players to choose their encounters with queerness: “Anyone can play The Sims and create same-sex pairings, but not everyone who plays the game will be confronted with queer content” (218). It is this confrontational aspect that is important for queer visibility and which the game elides in favour of fanciful and fantastical dating scenarios relatively free of any consequence.

If the game is marketed towards cis, heterosexual women, allow me to offer some queer experiences that the game doesn’t engage with, and which can be unfortunate but integral aspects of queer life. I’m still afraid to hold my partner’s hand in public. I worry if someone, upon glimpsing my long hair will feel mistakenly justified in assaulting me. Only a few years ago, I was stalked down the street a couple of blocks from the ByWard Market in Ottawa by a man shouting homophobic epithets at me because he found my boots ‘gay’. (Those same boots I used to hightail it to safety.) Only a year later I was mugged at a bus stop while wearing a pink shirt; in the twenty-first century, at the Rideau Mall, in the capital of Canada. A moment before the assault, one assailant turned to the other and said “you gonna stare at your boyfriend all night or what?” With that prompt, the man, whose eye contact I had previously mistaken for flirting, suddenly lunged at me. I offer these moments of subtle and overt violence not to catalog a seemingly endless list of crimes committed against people like myself but to point out the very real conditions of queer existence that are so often written over in the narrative of growing LGBTQ acceptance, which in some ways this game might be said to contribute in keeping out.

Coming Out On Top, that other gay dating visual novel game, demonstrates one of the ways in which this violence might be woven into the narrative in a way that signals danger without dismissing it. The first scene in the game impels the player to come out to the main character’s roommates. If you do not, the game resets itself. There is no other option than to come out, if not on top, than at least into the socio-cultural matrix that has devalued, delimited and silenced queerness for so long. If you choose not to let your character come out, he takes a rare meta moment to berate you for seeking to closet him: this is not only your story, he reminds the player, blocking any further progress–a lesson which the team behind Dream Daddy should take to heart.

Correction: Early in the podcast Betsy mentions that Robert’s daughter is in her 30s, however in the game Robert describes her as being in her late 20s.

Shaw, Adrienne. Gaming at the Edge: Sexuality and Gender at the Margins of Gamer Culture. University of Minnesota Press, 2014.