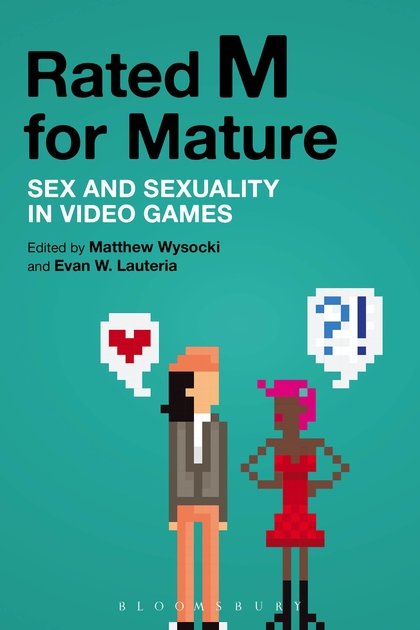 Jason Lajoie is a PhD candidate in English Language and Literature at the University of Waterloo. His work explores how gay males construct and embody identities in the domains of online gaming, online dating and social networking.

Over the past few years, games have begun to feature sexual content that is increasingly nuanced, and which moves away from the conspicuous treatments that have fueled political outcries in the past. Rated M for Mature seeks to offer a sustained scholarly response to these developments, to foster critical debates  of sex in video games, and to push for new considerations and even implementations of sexuality in games. The collection of essays is categorized into three distinct sections: the first, “The (r)evolution of video games and sex”, examines the history of sexual content in video games and the varying political and social responses; the second, “Video games and sexual (dis)embodiment”, explores the use of sex and sexuality in both video game play and practice; the third, “Systems/spaces of sexual (im)possibilities”, considers the interplay between sexual content and game design.

Contributions to this 2015 collection from game and media scholars frame the historical and current ways sex and sexuality have been deployed and experienced in video games, and even suggest potential designs. The essays demonstrate that further research on these topics require and would reward further inquiry, especially since the book itself warrants a place on the reading list of any serious games scholar.

In Part 1, transgressive inclusions of sexuality are considered alongside the regulation of sexual content in games. Evan Lauteria’s essay on Western censorship of queer sexuality and gender in Super Nintendo games is included with two essays on the history of furor in the West surrounding problematic depictions of sexual content, especially the existence of rape and sexual violence simulators (Rapelay and 177 in Pelletier-Gagnon and Picard’s essay, and Custer’s Revenge in Dan Mills’). This arrangement, however, may invite invidious comparisons. Categorically, these essays are linked in that they all explore censorship; conceptually, however, they differ drastically. While Lauteria’s essay shares concerns in common with Zach Saltz’s essay, which explores the legal battles and regulations surrounding the use and depiction of sexual content in video games, perhaps placing Lauteria’s essay in Part 2 instead might have served better. Admittedly, it may be that reading Lauteria’s essay sandwiched between these others may have simply rubbed me the wrong way, and using it as a conceptual bridge seems more logical to me.

Summer Glassie’s essay, which concludes Part 2 and offers a useful conceptual bridge to Part 3, is a close reading of sexual content in Bioware’s Mass Effect games, and the often contradictory and inconsistent portrayals of Asari biology and culture that Glassie argues undermine the effort. For all its extraterrestrial overtones, sexuality in Mass Effect often remains “defined against a heterosexual dichotomy” (165). Glassie argues that even asexual species like the Asari, which superficially serve to challenge such conceptions, nonetheless reify traditional heterosexual compulsions by framing that which is otherwise not sexually dimorphic according to straight understanding. Ultimately, however, Glassie concedes that

[b]y creating a species whose sex and sexuality collapse the heterosexual binary, despite those same characters being portrayed within the sphere of conventional gender markings and language of the heterosexual dichotomy, BioWare developers are pressing at the boundaries of their own industry and the heteronormative foundation of traditional science fiction. (170)

Part 3 explores design and content potential and revisions for sex in games. In “Death by Scissors: Gay Fighter Supreme and the sexuality that isn’t sexual”, Bridget Kies addresses the controversy surrounding the delayed release of Handsome Woman’s Ultimate Gay Fighter – later renamed Gay Fighter Supreme in the wake of legal proceedings raised against it – to consider the reframing (and potential elision) of LGBTQ content in games. In “Iterative romance and button-mashing sex: Gameplay design and video games’ Nice Guy Syndrome,” Nicholas Ware explores the ramifications of iterative design and its relationship to the “Nice Guy syndrome.” Ware calls for design changes that reframe the way we approach love and sex in games, from iterative designed button-press, “trial-and-error, infinite-continues, explore every-option modes of game navigation” (226) that inculcates a Nice Guy Syndrome, towards a problematic iterative strategy that “treats love like a video game: pick the right choices, do the right things, win the girl” (235). The solution Ware proposes is to increase randomness in games, to add further nuance and chance to the game and its events, or to “minimize the presentation of algorithmic representations of love” (237).

In the final essay, Brent Kice assesses game developers’ usage of sex within games along two valences: commodification of sex or emotional attachment through sex; between player-disconnected or player-connected sex acts, respectively (254). This test extends to whether game developers use sex to enhance or merely prolong gameplay. Underlying Kice’s concerns are questions of merit and value and, throughout the essay, Kice encourages the game community to take seriously the presence of sex and sex acts in video games, as more than a commodity for game developers to exploit and for players to consume.

A general theme that emerges in the collection is the tension between desire for the display of and participation with sexual content, and the concern that most sexual content and configurations of sexual activity engage with sex only to reinforce a hypermasculine male gaze and to reify heteronormative constructions of sex and sexuality. Though we want sex in games, and enjoy playing with and through sexuality, the interactivity of videogames problematize the inclusion of sexual content. Just as the male gaze can be established through the inclusion of sexual content, that same content can serve to subvert it. Ultimately, as Summer Glassie helpfully observes, such “gameworld features allow for a space where awareness and exploration of sexualities outside of the heterosexual binary can take place” (162).
The editors express the hope in their introduction “that this collection contributes to game studies’ continued maturation with innovative, nuanced approaches to the topic of sex and sexuality” (3). As the first collection to offer a sustained exploration of sex and sexuality in video games, these essays cover much about these dual subjects without offering a sustained critical focus on any single topic. The focus of each contribution  reflects that of the contributors, who stem from different fields, including history, sociology, and communication. Admittedly, I struggled through some of the design essays, if only because game development lies beyond my present field of interest. So while this broad focus risks alienating readers who may perhaps wish for a more consistent methodological approach, the essays nonetheless offer productive inroads to further discussion. Rated M for Mature’s exhaustive (though never exhausting) range of topics, from agency in simulated BDSM, controversy surrounding eroge (“hentai games”), sexual violence and censorship, to Joydick and teledildonics, ensures this collection’s value in further maturing and expanding scholarly, gamer and scholarly gamer discussions about sex and sexuality in video games and video game culture.