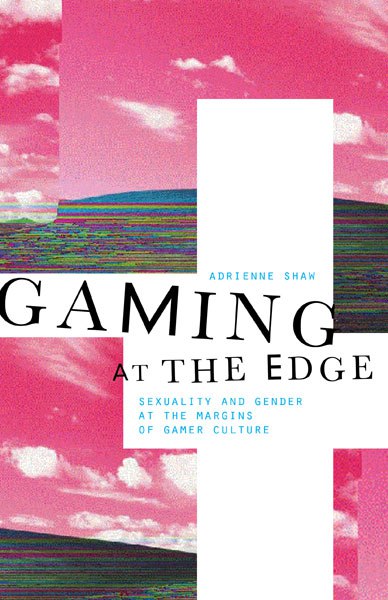 Lindsay Meaning is a Master’s student in the Experimental Digital Media Program at the University of Waterloo. Her research interests include video game rhetoric, fan writing and fan communities, and nineteenth-century women’s writing. In the fall, she will enter into the PhD program in the English department at Waterloo.

I have never identified as a ‘gamer’. I transitioned from casual to serious player in the months just prior to the drastic increase of online harassment campaigns, and the fierce attacks against diversity that characterized them. The toxic, sexist rhetoric that spread across gaming communities seems to have tainted the label of ‘gamer’ in my eyes. Of course, this movement did not go unopposed, and the calls for increased representations of diversity in video games have been numerous and vehement. An essential addition to this conversation is Adrienne Shaw’s book Gaming at the Edge: Sexuality and Gender at the Margins of Gamer Culture. Gaming at the Edge offers an ethnographic study that explores the ways members of marginalized groups engage with video games, how the ability to identify with the characters represented in games shapes this engagement, and argues that ongoing conversations about diversity in games should be reframed to account for the intersectional nature of identity.

Before I began reading Gaming at the Edge, I considered my own experiences with identity in the games I have played. When a game presents me with the possibility of choice in character selection, I invariably choose to play as a woman; I have always considered this choice to be a means by which I could extend myself into the world of the game. However, in all the games that I have played, the character with whom I have felt the deepest emotional connection, whose ideals and struggles I identified most, was the protagonist of Assassin’s Creed III, Ratonhnhaké:ton – a Native American man. This was a character with whom I appeared to have very little in common in term of racial or gender identity. Why was I drawn so much to Ratonhnhaké:ton, when he did not represent any of the fundamental aspects of my identity? What does it mean to identify with a character? How is my identity as a woman tied to the way in which I engage emotionally with the video games I play? It was in the hope of finding answers to these questions that I approached Gaming at the Edge; I was not disappointed.

Part of Shaw’s goal in Gaming at the Edge is to uncover and interrogate the assumptions under which discussions of representation in games have previously been conducted. She argues that there have, until now, been two ideological frameworks through which the issue of representation has been addressed. The first, which Shaw calls ‘market logic’, is the presumption that representation is important because it helps to sell product to marginalized groups. The second, ‘educational representation,’ asserts that it is important for individuals to see characters who do not look like them on screen, because doing so will lead to a better understanding and toleration of difference. Shaw argues that neither framework is sufficiently able to address the complexities of representation, as their focus on specific and singular identifiers leads to breaking down whole identities into mutually exclusive categories; that is, these frameworks address issues of race, for example, or of gender, but they fail to acknowledge or understand the intersectional and unstable nature of identity.

It is through the construction of a ‘third way’ that Shaw hopes to address the problems inherent in previous research surrounding representation. Shaw’s work in Gaming at the Edge is to create a critical framework that addresses identity as an intersectional whole, rather than a series of markers in isolation from each other. This critical framework places representation and identity in a broader context, with a greater importance than simply its influence over the consumption of media. She approaches the issue of representation ‘from the edges’, building her argument upon a series of interviews with gamers who, for the most part, identified as being somehow outside the norm – that is, the image of the ‘typical’ gamer, the white, heterosexual male. In focusing on the player rather than on the text, Shaw is able to examine the underlying issues of how, when, and to whom representation in video games matters, rather than simply evaluate said representations.

A key theme which emerges throughout Shaw’s argument is the distinction between identifying with a specific character, and identifying as someone who shares identifying markers with a character. When identification is discussed, it is identifying with a character that is implied. Shaw notes that there is, generally, no firm scholarly consensus on the definition of identification as a concept. The definition which evolves out of her analysis of her interviewee’s understandings of the term is centered upon an affective connection with a character. Shaw reveals that this connection is not, as might be expected, necessarily forged through shared markers of identity. Players often identified with characters in media and games with whom they did not share identifiers, or failed to identify with those characters who did. While researchers and game designers tend to assume that players automatically identify with the avatar or character that they control, Shaw discovers that this is not the case. Rather than the interactive aspects of games driving the process of identification, she argues that it is the affective qualities of game narratives that build connections between players and characters.

This exploration of how identification functioned for her interviewees leads Shaw to conclude that it is not at the level of the individual that representation’s primary importance lies. A common refrain amongst participants in Shaw’s study was that representation was “nice when it happened”, but not essential to the enjoyment of a game, or identification with its characters.  At first glance, this conclusion seems to serve only the interests of those who fight against the inclusion of diversity in games, who are desperate to maintain the status quo. However, Shaw frames the unimportance of representation to individuals as a reason for producers to include diversity – or rather, as a refutation of the justifications given for a lack of diversity. Essentially, Shaw’s argument states that if players can identify with players who do not ‘look like them’, then producers have no reason not to include a diversity of representations. Ultimately, Shaw makes a case for diverse representations in video games that is concerned not with their benefit to individuals, but instead their greater social impact. She argues that representation is a powerful political force, and that while diverse representation may not be able to dismantle structural inequalities, it still “makes certain identities possible, plausible, and liveable” (67).

The greatest strength of Shaw’s work in Gaming at the Edge is in its challenge of the assumptions that lurk beneath the conversation about diversity in gaming, both in the media and in academic discourse. There is, for example, the presumption that to control the movements of a character is to automatically identify with them. There is also the prevalent notion that the purpose of diversity in games is to appeal to niche markets, or to provide individual players greater emotional engagement with games. These are easy assumptions to make, appearing pragmatic yet progressive in spirit – which perhaps explains their pervasive and persistent nature. In Gaming at the Edge, Shaw strips down the critical mass of discourse on diversity to reveal the cracks in its foundation. In doing so, she paves the way for the construction of a more sophisticated and complex understanding of how representation and identity function in games. The nuanced critical framework and fresh insight that Shaw provides represents an opportunity to deepen and extend the scholarly conversation surrounding representation. In addition, future qualitative analyses of games can benefit from the new perspectives introduced by Shaw.

If Gaming on the Edge has a weakness, it is in the method of its appeal to game producers and developers for increased diversity. Of course, Shaw correctly asserts that the responsibility for creating diverse content should lie with the creators of said content; too often, it is members of marginalized groups who are expected to bear the responsibility of maintaining a constant push for diverse representations. Shaw insists on placing this burden squarely where it belongs: on content creators. I believe that most scholars and activists – myself included – would wholeheartedly endorse this shift of responsibility; it is also possible that many indie game developers, who have already demonstrated a commitment to diverse representations, would be open to accepting Shaw’s logic. However, the issue lies in whether Shaw’s arguments will be as convincing to the massive game development companies that wield so much influence over the gaming market. Shaw acknowledges the difficulty in convincing producers of the social necessity of diverse representations, saying that “such political and ethical demands do not sway corporations as much as financial arguments do” (221). Her solution  posits that developers have no financial reason not to commit to diversity, since visual markers of identity do not affect enjoyment or identification.

While this argument certainly addresses and refutes industry objections, it fails to provide a real incentive for change. Shaw attempts to provide such incentive when she argues that “if media producers want to create culturally relevant and important media texts, they need to take the initiative, learn about cultural difference, and design texts that reflect it” (218). The underlying assumption here is that cultural relevance is an important motivator for gaming companies. I would argue that this is true only insofar as it influences their bottom line, as these companies exist within a capitalist framework where profit is primary, above ethical or social concerns. Shaw does occasionally gesture towards the entrenchment of neoliberal ideology within the gaming industry, and to the difficulty that this creates in overcoming the market-logic that emphasizes isolated identities and niche markets. However, there is a difference between acknowledging an issue and creating an effective strategy to address it. Shaw’s argument that producers have a social responsibility to present a diverse world in their games may be true, but I would argue that social responsibility fails as a significant motivating force in a capitalist economy. Although there may be occasional exceptions to this general rule, or companies who fulfill their social obligations as a tool to enhance their brand or reputation, I remain skeptical about the possibility of industry leaders to take the initiative in seriously representing diversity for its own sake, rather than to pander to specific demographic niches.

It may be that this cynicism is unwarranted; Shaw certainly appears to be optimistic in the ability of a compromise between financial and social interests to drive change. However, whether or not Shaw’s argument is capable of causing such a significant shift in corporate culture is less important than its impact on the discourse surrounding identity and diversity in games. Through the creation of a ‘third way’ – a new ideological framework through which to tackle the issue of representation – Shaw is able to refocus this critical discourse. Through her player-focused methods, Shaw corrects fundamental misapprehensions about the nature of identification, and its ties to identity. Her work  affirms the importance of diversity, not to the individual, but to society. The political and ethical value of representing diversity lies in acknowledging and making visible the lived experience of marginalized individuals.