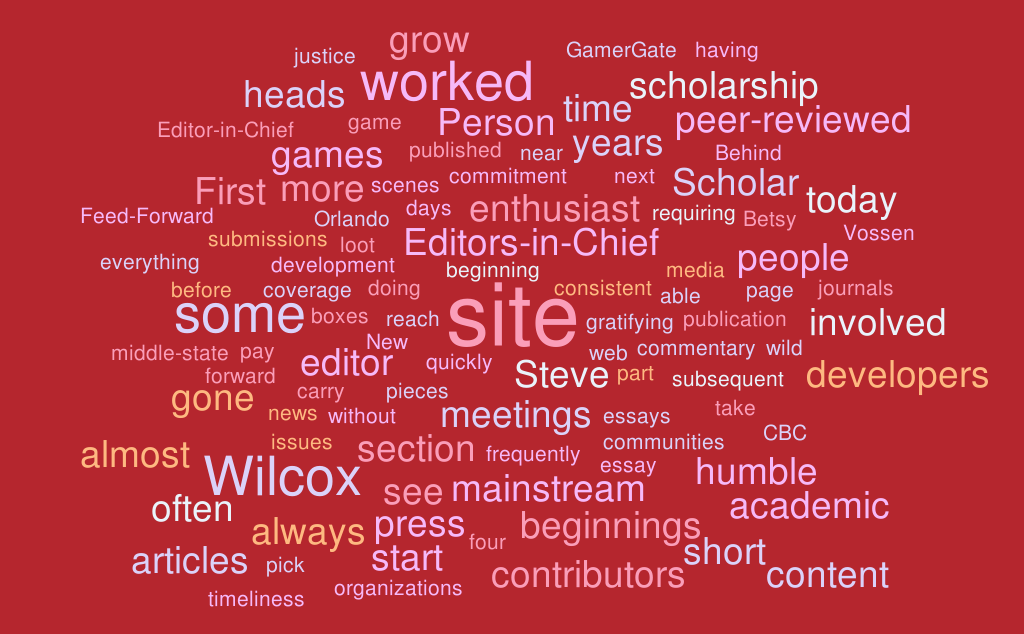 Rob Parker is the Managing Editor for First Person Scholar. He is a sometimes host and contributor for Roguelike Radio. When he’s not destroying his sleep with Subterfuge, he can be found working as an instructional designer. Sometimes he writes interactive fiction.

You don’t often hear from me, but I’m the Managing Editor for First Person Scholar. I’ve been involved in this site in some capacity or another almost from the very beginning. In 2012, FPS meetings grew out of the semi-regular Games Institute meetings at the University of Waterloo, and I’ve had the privilege of watching the site grow from those humble beginnings to the middle-state powerhouse it is today. Whether I was involved as a contributor, a fan, or an editor, First Person Scholar has been a near constant presence in my life for five years.

The anniversary always manages to creep up on me, but as of today, the site has been running for half a decade. Since 2012, we’ve had four Editors-in-Chief (Steve Wilcox, Emma Vossen, Alexandra Orlando, and Betsy Brey) and far too many section heads for me to do justice by naming them all individually. Behind the scenes, dozens of others worked on web development, copyediting, social media, podcast production, and as faculty advisors. Each of these people has had a profound impact on the direction of the site. I consider many of them to be some of my closest friends. I’m so proud of everything they’ve accomplished while working on the site, and of everything they’ve gone on to do.

We’ve gone from having to scramble for weekly submissions (often requiring section heads to quickly knock out an essay, book review, or commentary days before publication) to being able to pay our contributors. Now, it’s almost unheard of for us to start a semester without at least a month or two of content planned out in advance. We’ve also expanded the genres of content we provide, adding podcasts and interviews to the mix.

We’ve become a home for high-level academic discourse (a bunch of pieces that got their start as essays have gone on to be published as peer-reviewed articles), enthusiast discussions, and in-depth conversations with game developers. Writing in 2013, founding Editor-in-Chief Steve Wilcox called for Feed-Forward Scholarship. Wilcox stressed the need for timeliness in our content, positioning our contributors “as part of the production and reception and games.” And while I’m sure everyone agrees we have a long way to go as a publication, every decision we’ve made as a site has moved us closer to that goal.

It has been gratifying over the years to see subsequent Editors-in-Chief pick up this idea that critical writing and scholarship is an important part of the production and reception of games and carry it forward. Our editors have been interviewed by major news organizations like CBC and NBC, weighing in on mainstream coverage of a range of gaming-related topics: everything from GamerGate to gambling in loot boxes. Our articles have been cited in peer-reviewed journals and referenced by the New Yorker. And if you go back and read some of our editorials, you’ll notice a consistent commitment to self-criticism. We’re doing well, but we could always do more: be more inclusive, reach out to other communities, speak to issues that are frequently ignored by the enthusiast press and completely off the radar for mainstream press or academic scholarship.

To get even a short list of the people who have worked with us, take a gander at the people page on the site some time. We’ve worked with a dizzying number of amazing scholars, writers, and developers in such a short time.

It’s been absolutely wild to watch the site grow from those humble beginnings, and I can’t wait to see where it goes next.

Happy Birthday, First Person Scholar! Here’s to many, many more!