Lillian is a Master’s student at the University of Waterloo. Her main areas of interest revolve around the cognitive and semiotic aspects of rhetoric present in the communication habits that arise in multidisciplinary and cross-disciplinary environments and teams. Her research focuses on the rhetorical figures and moves present in the strategies of communication pedagogy with a particular interest on digital environments (including games, training tools, etc.).

And from those first orchestral bars, I had a voice. . . or my character had a voice. And I had a. . . my character had an identity that I as the player created. I tend to get lost in my games. When I’m playing a game I’m not simply a human sitting in a chair with a PlayStation 4 controller watching the pixels of my screen illuminate and change. I am the protagonist, the hero, the guardian that marches into every situation prepared for the worst with the skills necessary to overcome them. I know for a fact not everybody plays this way; but I do, and that is why Destiny allowed me to become legend.

Well, at least at first.

Fast forward three years to the second installment of the game. Destiny 2’s main developer—Bungie—allowed the player the opportunity to carry their guardian forward into the newest string of adventures that lay ahead. One catch though: you no longer have a voice.

Destiny never gave you communication options, but your character did speak; I vividly recall a certain conversation with a pair of royal siblings. In Destiny 2, your character no longer speaks to anything or anyone around them. This came as a shock to me at first but got me thinking back to the progression of Destiny over the last three years. I realized that the series of DLC expansions and larger content updates had kept the universe fresh and teeming with new sights and sounds, though even then, the sounds of your character had started to dwindle. Replaying through the later updates, I noticed how little the character spoke, if at all. Destiny 2 took the final step across this threshold removing all character sounds apart from—what I’ll call—unconscious sounds (footfalls, screams of pain, etc.).

Silent characters are not an oddity in games; look at one of the most famous video game characters of all time: Link from the Legend of Zelda. Link, amongst thousands of other silent characters, functions as a blank slate on which a player can create their own individual player-character. Based on my personal style of play, I love this freedom to create and become the character of my dreams. The possibility to choose the identity I will be living as for an indeterminate number of hours is liberating.

What is not liberating is watching your character raise their arms moving to speak, only for their ghost (your AI companion in the Destiny universe) to talk over—or for—you.

In hindsight, I really shouldn’t have been surprised. The Beta version of Destiny 2 allowed the players access to the first story mission in which you watch your ghost kicked off a ship flying hundreds of feet in the air. The ghost of course survives, but that doesn’t keep your character from throwing themselves to the edge of the ship, reaching over trying to catch their ghost–all the while making absolutely no noise.

This was a jarring experience to watch, let alone with which to associate one’s identity. We’ve all seen films and television series in which the protagonist loses their companion and is thrown into a series of screams and gurgles; it feels like the natural human reaction to this event. Destiny 2 opens with the inverse. The awkwardness I feel occurs as a result of the strict disconnect between the character’s seemingly emotional actions and emotionless silence. 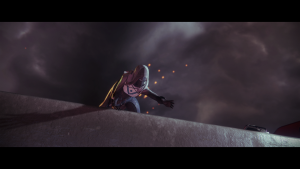 The scene in which the player-character is reaching for their ghost.

Unfortunately, this is not the only time this happens. As the story progresses conversations are between the NPCs and your ghost. A striking example of this occurs when Cayde-6 (voiced by Nathan Fillion) is stuck in an interdimensional portal begging you to “say something” to confirm you understand the plan. Before you have time to respond your Ghost responds, “Fine I’ll say it! We got it Cayde,” and Cayde is gone before your character has time to add anything.

Destiny was never a game that allowed you full control of your environment or your conversations; you had a sequence of missions to complete with a set narrative and minimal sidequesting (unlike games like Dragon Age). As somebody who enjoys the narrative of a game, I personally don’t mind being forced along a particular path; my identity as character is given agency by the choices I make in game and the dialogue I am a part of in cutscenes. I, of course, appreciate the opportunity to choose my responses to events within a game, but in a game as focused on playing with friends as Destiny, I understand the reasoning for keeping the narrative duration consistent for all players.

What I do not appreciate is my ghost taking the last pieces of my dialogue and as a result, the last bit of agency my suspension of disbelief had allowed. It feels as though I am a marionette, an inanimate object being guided by the will of another, a set of pixels on a screen being controlled. In short it forces me to recognize that this is a constructed work, and I lose the ability to be consumed by the narrative.

As much as this character narration being pulled from the game is enough to force me to step back, it is not the only difficulty I face in regard to Destiny 2’s silenced characters. The second—and arguably more fleshed out reason why I personally struggle with this decision—is a direct result of who I am and how I play; the implementation simply exacerbates my situation. Character speech aside, I remain wholly capable of embodying my character as fluidly as ever. I have no issue assuming my role as a female Titan to fight the Darkness. I do struggle however with the fact that my traditionally male voice does not match the female character I become.

The association of gender as self to gender as character is no newer a notion than the silent protagonist, though it has begun to see more attention in recent years. As an example, the interaction between the two as a point of contention is discussed in the First Person Podcast where they talk about the blank slate character and gender in their episode on Breath of the Wild. In games such as Zelda and Destiny, the adventure is purely non-gendered (with the exception of certain NPC phrasing) such that the risk of gender-based issues is—for all intents and purposes—nonexistent. I personally don’t see the reasoning behind removing gender identifiable speech, especially when a gender choice must be made in character creation. If the story is not impacted by the choice you make, why go the length of reducing the impact of this choice with a forced silence?

As someone who uses games as an escape, I would argue that I am likely the target audience for games allowing character creation. When the body you inhabit in the physical word does not match your cognitive experience, the character customization in games is an opportunity and a means of representing yourself physically in the digital world. Now that they have pulled the voice from my character, I am forced to replace it with my own; my own voice becomes that of the female character with which I embody and identify. This vocal crisis is not manifested simply on the grounds of dissonance between the female body and the male voice; after all, I am a strong advocate for identity beyond the socially constructed binary. This vocal crisis is a result of the dissonance I feel with my own voice. As a transgender individual I am caught in a shifting flux from masculine to feminine—my voice often lagging far behind. This is where the confrontation of the Trans player and the silent character comes to light.

Where developers such as Bungie’s targeting for my demographic is off is in their strict binaries and their limitations within character creation—for example, voices. Destiny as a pseudo-MMO (massively multiplayer online game) has already made great strides as far as gender differences and supporting female-identifying gamers are concerned. Foremost, they allow for the player to wear the same armor regardless of what gender their character is, instead relying on a class-based system—not unlike many true MMORPGs (massively multiplayer online role-playing game). Where Bungie differs is that their armor is full coverage for both genders with only slight changes in plate placement and curvature to match the body shape of the character. 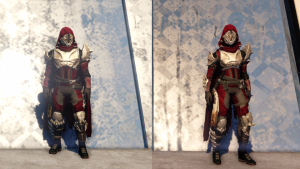 I appreciate this opportunity to present female in a game and not be hyper-sexualized. I am playing the character with which I identify, and with this armor system I am able to feel validated in doing so. This is a saving grace in my eyes, as without the agency to control my character’s speech, moreover to hear my character speak, I struggle to meld myself with my character and cannot reach my typical level of immersion. I do not see this as a conscious choice by the developers; if anything it occurred as a result of negligence or simply as a result of the stereotypes of their audience.

That does not remove our right as academics, gamers, and players of games (I stand with Vermeulen et al. in that it is important to recognize the distinction between the two on identity grounds) to think critically about these games and to push developers to be aware of the results of their choices. In the case of this choice it has made me as a Trans individual feel removed from my character and furthermore removed from the very game itself. I cannot claim that this is a universal experience for all members of the transgender gamer community—our experiences are as diverse as we are—but I do have a hard time believing that there is nobody out there with a similar experience.

With the June 5th announcement of Destiny 2’s September expansion “Forsaken,” Bungie stated that there will be a shift from cutscene style narration to narration through gameplay. With the release of “Forsaken,” there has yet to be a dramatic shift in the narrative style of the game, though, as was hinted at in the trailer, our characters’ voices were returned to us—briefly. The trailer raised our hopes by promising us new character dialogue to the tune of “Uldren Sov is mine.” What we were not expecting was the voice acting in the trailer to be the only lines our character would get through the entire expansion. “Black Armory” has, similarly, offered no reprieve from this overwhelming silence.

Our characters have been notoriously silent during gameplay from the initial release of Destiny. I am hopeful that the shift away from cutscenes will allow for a more immersive experience, one in which the first-person perspective and conscious action during narration will assist in alleviating this communicative dissonance and dysphoria. To me, expecting a dramatic shift in narrative style—as opposed to medium—is unwarranted. I do not expect Bungie to allow us full narrative freedom in their world and I’m perfectly okay with that. I do however, expect them to be conscious of their diverse player base and improve on their narration style to better facilitate the immersion of all their players. I am wary of the past, but hopeful for the future. I cannot wait for that day where once again I am my Defender: “The wall against which the Darkness breaks.”