Paige is a writer and journalist who has written for sites such as Women Write About Comics, The Mary Sue, and others. She has a great love for all things Star Wars, games, and pop culture.

Spoilers for both Final Fantasy XV and the DLC titled “Episode Ardyn”. Any alternate endings from Episode Ignis and The Dawn of The Future are not considered in this article.

“And only by the True King’s hand can the immortal Accursed and the Light be restored to this world.” – Bahamut, Final Fantasy XV

In the months following Final Fantasy XV’s release in November 2016, I was in the final semesters of my undergraduate degree and I was more than excited to have a new game to play during that time, especially one that was the latest entry in a series that I have a great love for. Final Fantasy XV (FFXV) was a long awaited title with stunning graphics, characters that looked interesting, and a storyline rife with plenty of Final Fantasy staples like political intrigue, a heavy emphasis on character development, and overarching plots that cross over with each other.

This was exactly the kind of game that was perfect for me. I was kind of drowning in school and getting closer to graduation was a huge stressor. I started FFXV and was immediately drawn in by the main characters, Noctis, Ignis, Prompto, and Gladiolus. One of the opening scenes of the game is the four of them pushing their broken-down car while a cover of Stand By Me by Florence and the Machine plays. This was such a great part of the opening because you really get to see some of the interactions between the four guys, and the very realistic relationships they all have with each other are super easy to see at this early point, from Gladiolus kicking at Noctis and Prompto as they lay on the road to Ignis just looking completely done at the wheel of the car. As both a writer and a player, seeing fantastic relationships between the main characters is one of my favorite things when it comes to games. And these sorts of interesting relationships only continue to appear in FFXV between the main four and even between Noctis and the antagonist, Ardyn Izunia.

Ardyn Izunia is the main antagonist of FFXV, going out of his way to cause havoc for the four guys, meddling in political affairs, and working to see the collapse of Noctis’ bloodline, the Lucis Caelums. He is painted as the mastermind behind the absolutely terrible things occurring in the world of Eos as you go through the game and he rightfully earns that title. While he is truly a villain, there’s much more going on behind the scenes than we as players know, at least until we get further along in the game.

FFXV makes use of a rather classic storytelling trend: that of the chosen one. But as opposed to a game like The Legend of Zelda where you might only have one chosen one, FFXV has two that are diametrically opposed throughout the entire game to a certain point. With that being said, the two chosen ones, Noctis Lucis Caelum and Ardyn Izunia, were handed their chosen one status by the gods of the game’s universe known as the Astrals. Both were given specific roles within the grand scheme of the story and were never really given much choice in the matter. This sort of setup was something that really caught my interest and helped further my love for both of these characters.

What particularly stood out to me in this game was the way in which each character reacted to their roles and how they went about accepting them. Chosen one arcs can usually go one of two ways: the chosen one can accept the role and carry it out, or they may choose to go against it completely. In FFXV, both Noctis and Ardyn fall into their predetermined roles eventually, but by completely different standards.

Looking first at Noctis, he is the crown prince of Lucis. He’s royalty in a family that has close connections to the Astrals that ultimately give him the chosen one status that he will need to fulfill. He’s in his early 20s, went to a rather normal high school, and has a close group of friends that serve as a great support system for him. He’s destined to become the “True King” of Eos, the king who will save the world from the impending darkness. He is only made aware of this destiny once he’s absorbed into the Crystal (an artifact that draws its power from light and provides magical power to the line of Lucis).

While Noctis wasn’t fully aware of his destiny to become the True King his entire life, he did know of the tales about the crystal, the Astrals, and much of the mythology that talked about the True King. Once he is made aware of his role, and due to his character development over the course of the game, Noctis is ready to take on the mantle of this heavy role the Astrals have given to him. His chosen one arc follows the narrative beats that you expect: he is fated to a role that will save his world, he must sacrifice himself in order to fulfill his role, and he’s been trained in a myriad of ways that prepare him for that role. As the player, getting to know Noctis throughout the entire game and slowly learning as he does what his fate is really packs a punch. I remember being so invested in knowing his story and where it would take him. 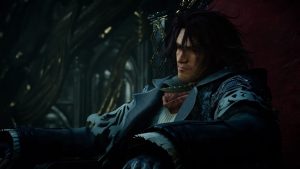 With Ardyn, his role as a chosen one starts similarly to Noctis’. He was a healer 2,000 years before the setting of FFXV, where he would take people’s ailments into his own body. This led to him having a deteriorating condition thanks to the amount of Starscourge (a plague that spread across Eos and mutated humans and animals into daemons) he took into himself. He hid his condition while he and his brother, Somnus, waited to hear who would be named the first Lucian king. Over time, his brother began a smear campaign against him, painting him as a monster and ultimately trapped him in a prison for 2,000 years. He was erased from history until he was found by Verstael Besithia from Niflheim.

Ardyn’s chosen one arc began as a chosen healer and as a chosen king but Ardyn’s story shifts significantly. After being freed from prison, Ardyn does speak to Bahamut. Bahamut is the God of War, depicted as an indifferent being, and he stands above all of the other Astrals in the game. Bahamut tells him the Astrals have a new purpose for him, that he will bring darkness to the world and he will play the role of sacrifice to the True King. He now becomes the “immortal Accursed” that will bring only darkness to the world. Due to betrayal, the role change courtesy of the Astrals, and choosing to submit himself to the Starscourge, he embraces the darkness that he’s been forced to bring into the world. As with learning Noctis’ fate, knowing more and more about Ardyn’s story really brings to the foreground just how heavy a hand the “chosen one” plays in his life. It was so interesting to see as the player just how different Ardyn had become from his origin story to the time you meet him in the main game. I knew him firstly as the villain, but there was much more behind him than I originally thought.

Noctis and Ardyn both stand as parallel characters to each other because of their chosen one arcs. They start out with the Astrals having a predetermined fate for them, that of King in some capacity, but where one maintains their original path, the other is pushed into a new (and darker) direction. Their stories diverge from one another and ultimately end up in a fated battle that leads to their deaths. The paralleling of these two characters is something that other games might take away from FFXV. The chosen one arc is common in games, but by using something like a parallel character to showcase differences between your antagonist and protagonist, one is able to bring something fresh to the trope. Setting up a parallel like Ardyn allows me as the player to really see different angles to the chosen one story and really connect further to that story.

The crossing paths of Ardyn and Noctis are wrought with tragedy, brotherhood, and destinies that they can’t really escape. For Ardyn, he has the option to willingly give into his fate or fight against it when Bahamut reveals to him that he’s meant to be the Accursed. Whatever you as the player choose for Ardyn, he becomes the Accursed no matter what, and he truly wants to see the world burn through any means necessary. Yet, Noctis ultimately defeats Ardyn in their fated battle of kings and their chosen one arcs collide in a sense of finality that brings a bittersweet end to both their stories.

Noctis and Ardyn’s stories come together in their final battle, helping to bring the overall story of FFXV to a close in an ending that left me and plenty of other fans emotionally destroyed. FFXV left such an impact on me because I really fell in love with the characters, story, and world throughout. When you feel as if you’ve traveled with the characters on such a wide-reaching journey (and a road trip!), seeing their story come to an end really hits you. Especially in the case of Noctis and Ardyn, I was excited and sad to see their stories ending because I really came to love them as I played the game.

At times the story and lore in FFXV can be a little loose in comparison to other games, but the chosen one arcs and the dynamic characters that are coupled together bring the story together in a truly beautiful way. You spend a great deal of time with both Noctis and Ardyn and really get to see just what the Astrals’ decisions have done to them as people, their lives, and those around them. As a writer, this especially stayed with me after I finished my first playthrough because I love seeing complex things done with characters. It makes for a more compelling game and story!

With the parallels that bridge Noctis and Ardyn together throughout the entire game, FFXV makes use of their chosen one arcs in a deeply interwoven story that displays the lengths one will go to when in an impossible situation. As I played through the game the first time, it was so easy to lose myself in the story and characters due to that. There’s a sense of connection that springs from the characters that I really felt, and it made the story that unfolded a very important one for me as both a player and writer. The intertwining elements throughout both chosen one arcs made all the difference. With Ardyn and Noctis’ stories constantly crossing over, it’s so easy to see how they’ve been worked in together for the purpose of portraying two opposite sides of the chosen one arc. There’s a deep tragedy in the story that unfolds between the two of them but also something new blooming at the end of the game: hope.