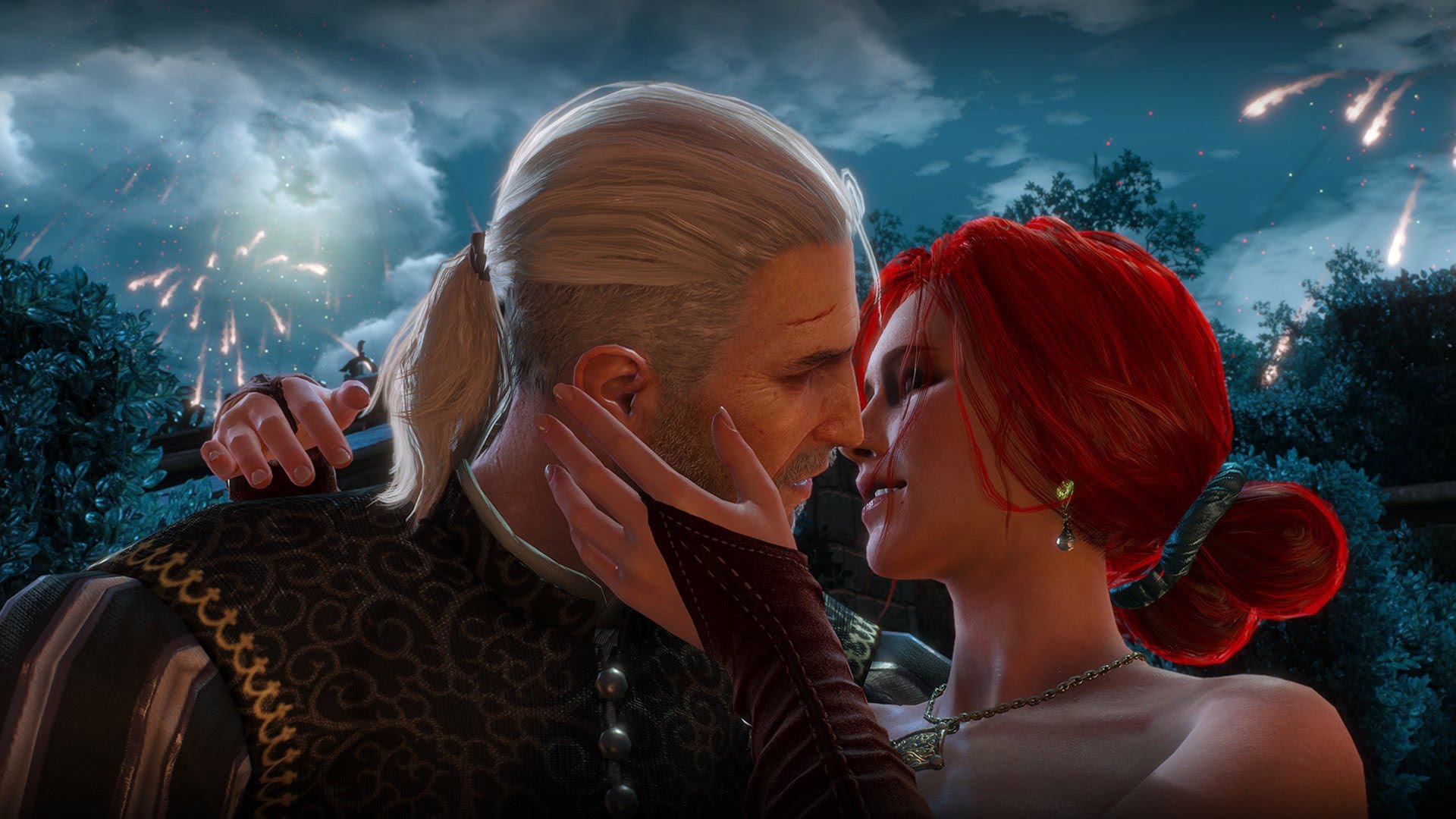 Salvatore Pane is the author of the novel Last Call in the City of Bridges in addition to Mega Man 3 from Boss Fight Books. His work has appeared in Indiana Review, American Short Fiction, Paste, and many other venues. He is an Assistant Professor at the University of St. Thomas, and his second novel The Theory of Almost Everything is forthcoming this winter.

Sex in video games has come a long way. Comparing the groan-inducing humor of Leisure Suit Larry or the meta-goofiness of Tomb Raider II to the more nuanced romance in modern games like Dream Daddy, Cibele, or To the Moon is inherently difficult because the former treats love like a joke and the later actually explores the pratfalls of intimacy. As games have increased in complexity—both aesthetically and in raw processing power—some have begun tackling sex with the same seriousness you’d expect from a high-brow novel or movie. But unfortunately, most games sink to the level of sexual discourse we see so often in popular culture where men feel entitled to women’s bodies. Think of almost any teen comedy—Can’t Buy Me Love, Weird Science, American Pie. Picture pretty much all the novels by the mid-century literary vanguard—Philip Roth, John Updike, Richard Yates. Return to the whiny emo music I stupidly worshipped as a teenager at the turn of the century. Video games are no different, and open-world games in particular have a tendency to treat sex as purely transactional. Obviously, this must change—at any time, but especially during this moment of reckoning in the wake of the #MeToo movement.

The Witcher 3: Wild Hunt is by all accounts a critical darling. With over 250 game of the year awards and a 92% score on Metacritic, this 2015 open-world adventure has quickly cemented itself as one of the defining titles of the current console generation. But, like many open-world games before it, Witcher 3 falls into the trap of treating sex as a purely transactional activity. There are seven women the player can sleep with if they fulfill certain objectives, and the worst of these are purely transactional flings or one-night stands. Early in the game, the player meets a sorceress named Keira Meitz. The game requires you to work with her for a short while to progress the story, but afterward, you can opt into two additional sidequests helping this sorceress stranded far from home. There’s a flirtatious back-and-forth between Keira and protagonist Geralt, but these quests are far from romantic. You explore a haunted cave side-by-side or venture alone to an island to rid a tower from a curse. Complete these simple adventures and bam, Keira invites you on a date and the game cues up a fully-rendered sex scene seemingly plucked from a steamy paperback romance. The rhetoric is simple: complete Keira’s tasks, and you’re entitled to sex.

One instance of transactional sex would be bad enough, but the game falls back on this tired trope over and over again. Enter a card tournament in a brothel, and you can sleep with Madame Sasha. Defeat Jutta An Dimun in a friendly bout of hand-to-hand combat, and she offers you sex. Pursue Syanna in the Blood and Wine DLC, and her final wish is banging Geralt while the two of them float through clouds. You can even get a doctor drunk at a wedding, but she will puke mid-coitus in a rowboat.

One of the two main romances in The Witcher 3 fares slightly better, but this shows how low our expectations are after hours of slaying wraiths to earn intercourse. Triss Merigold is one of the longtime female leads of the Witcher series, and to woo her, not only do you have to complete a bunch of quests—because of course—but you also have to choose “correct” dialogue options that evolve beyond, “Yes, I’d like to have sex now, please.” During a dockside farewell similar to the end of Casablanca, the player must select four “correct” responses to “earn” the ending where the player finally settles down with Triss. That the game even briefly acknowledges that sometimes sex is about more than simply fulfilling rote requests feels like a minor revelation, but even this tepid excitement is dashed when you compare it with the other major romantic option—the ridiculously named Yennefer. These two women comprise the cliched Madonna/whore dichotomy games have often dumped on players, and, unfortunately, to sleep with Yennefer you simply complete the required quests and tell her you’d like to kiss her or watch her undress. Nuanced this is not.

The blame for this doesn’t fall entirely at the feet of CD Projekt Red, the Polish developers behind The Witcher 3. Treating sex like an in-game reward has a long and dubious lineage reaching all the way back to 1981’s Softporn Adventure on the Apple II or 1982’s Beat ‘Em and Eat ‘Em on the Atari 2600. Modern games like Fallout 4 feature side-characters you can initiate sex with if you complete certain quests, and although series like Mass Effect and Dragon Age have attempted to complicate this formula by relying on Triss Merigold-styled conversations over Yennefer-questing to unlock sex, mainstream open-world games still feel so far away from exploring intimacy in any meaningful way. Feminist Frequency’s Anita Sarkeesian has critiqued so many of these games in her insightful “Women as Rewards” video.

The aforementioned Cibele, however, has so much more to say about relationships and desire than anything in the dozens and dozens of hours I’ve poured into The Witcher 3 or Fallout 4. In Cibele, developed by NYU Game Center alumni Nina Freeman, the player takes the role of a college-aged woman as she clicks around her desktop and participates in an online role-playing game similar to a 2D Final Fantasy XI. There, she meets a boy named Blake, and, over the course of the short game, begins a relationship with him, agrees to meet in real life, and eventually loses her virginity. These moments are rendered in live-action cut scenes starring Freeman, and there’s a voyeuristic undercurrent that turns Cibele vaguely dangerous and electric. At the end of the game, when Freeman stands frowning outside her apartment asking Blake if she’ll ever see him again, it’s a genuinely humane moment that hints at how this combination of player interaction and honest, adult narrative can be used to push games about sex further than they’ve ever gone before. But at its core, Cibele is a classic coming of age story in the vein of novels like Elif Batuman’s The Idiot or Elena Ferrante’s My Brilliant Friend, and, just like in those narratives, Cibele is ambitious and deeply-felt, treating sex like what it really is—messy and vulnerable and complicated—and not like the 2018 equivalent of the big head mode Easter Egg in NBA Jam. Games like Cibele present us a path forward where sex in video games is treated as a complex part of life and not like a schlocky, wink-wink reward for grinding.

The concept of sex-as-reward is deeply rooted in our culture and the belief that men are entitled to sex and that if they spend enough time doing whatever it is they think a woman wants, they’ve earned a sexual reward. This sentiment is prevalent in so many video games, but it’s obviously not just a video game issue. It’s embedded in the fabric of our society. Like I mentioned above, I was obsessed with every emo-punk band I tracked down on Limewire back in the early 2000s even though all of their music boiled down to the same impulse screamed over and over again—I was nice to you and you still won’t sleep with me; therefore, you’re a bitch. Isolated on their own, these bands aren’t especially evil or off-putting, but it’s the combined weight of all of these songs repeated again and again and again that shaped my idiotic beliefs as a teenager that took years of unpacking and self-reflection to even begin to dismantle. This isn’t just about transactional sex in The Witcher 3 or Fallout 4. The problem is the cumulative effect all of these portrayals have on us as a culture. And, although games like Cibele present an alternate path for sex in video games that is both more mature and human, these games alone are not an antidote to this problem. Like all media, video games reflect our society back to us. Sleep with Keira Meitz after clearing out a haunted tower, and tell me you like what you see.