An experimental digital artist, film and game critic, Ansh consumes as much pop culture as he is critical of it. He is currently a MFA candidate at NYU Game Center.

Games, we know, do not have the best reputation in terms of representation. Through the decades, games have gained notoriety for excluding people who aren’t seen as their target audience: especially women, people of color, and people of different sexualities. On top of that, certain genres—particularly military shooters and horror games—have developed a reputation for stigmatizing people with mental illnesses. Too often these games equate people who have a mental illness with monsters and/or villains.

For example, games such as Eternal Darkness: Sanity’s Requiem (Silicon Knights, 2002) utilize mechanics like sanity meters to describe the mental state of the player character, who is suffering from mental illness. If the meter is filled to its maximum, the player character is portrayed as going “insane,” thereby losing the game. Furthermore, as Patrick Lindsey notes in his article for Polygon, Far Cry 3 (Ubisoft Montreal, 2012) similarly portrays mental illness in a negative light, as the primary antagonist’s only basis for brutality is his implied insanity. This process of “othering” those with mental illness is deeply troubling. It reinforces stereotypes about mental illness and thereby deepens an already persistent stigma.

Although such negative portrayals remain the norm, Vampire: The Masquerade – Bloodlines (Troika, 2004) presents a rare example in games of an empathic and meaningful portrayal of mental illness. Bloodlines, released in 2004, is a computer RPG based on the White Wolf universe of tabletop games. Like many games in the RPG genre, the player in Bloodlines is given the choice to customize their character at the start and choose one of six classes, each of which is based on the Vampire Clans in the game’s universe. One of the clans, the Malkavians, are a group of vampires who suffer from a variety of mental illnesses including bipolar disorder and schizophrenia.

However, within Kindred, the colloquial term for the community of Vampires in the game’s universe, these characters are treated as equals, and are often regarded as Seers and Oracles. Even within the Camarilla, the ruling body of the Kindred, Malkavians are given an equal seat of power, and are thus represented fairly. By establishing a setting that treats characters with mental illnesses with respect, Bloodlines humanizes key Malkavian non-player characters, and communicates empathy to the player.

Effects of Misrepresentation through Negative Depiction

One of the most common misconceptions perpetuated by the stigmatizing mechanics of horror video games is the false equivalency that mental illnesses lead to criminally violent behaviour. As Ian Mahar notes, many horror games use mental asylums as their setting and task the sane player to fight against the violent, demented patients in order to escape alive. By encouraging players to react to patients with violence, these games essentially equate the mentally ill to sub-human monsters, unworthy of sympathy or empathy. This is a problem because the games we play have the potential to influence our beliefs and even behaviours. In Mary Flanagan and Helen Nissenbaum’s words, “games have inherent values which they instil in their players through play” (2014, p. 7).

Mahar reflects a similar opinion in the context of harmful representation, writing, “There is a social obligation to protect vulnerable members of society from misrepresentation, and to correct misrepresentations, especially within an industry partly responsible for disseminating them.”

Bloodlines consciously avoids negative stereotyping by carefully portraying every Malkavian NPC the player encounters during the course of the game as non-aggressive, which is consistent with their canonized behaviour in the universe as Seers and Oracles. Most of the Malkavians the player meets in Bloodlines are aloof, eccentric and insightful, but never violent or aggressive. There are two story-critical Malkavian NPCs who the player meets during the course of the game who demonstrate how Bloodlines portrays people with mental illnesses in a non-stigmatizing manner.

A Tale of Two Malkavians 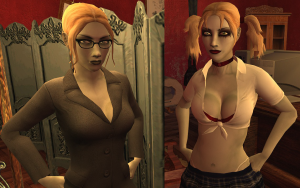 Therese/Jeanette Voerman, the proprietor of the Asylum Bar, suffers from a dissociative identity disorder (DID). Within the game, the player first meets them as twin sisters with distinct personalities who are in constant conflict with one another. Therese acts as the serious, confident and commanding half, while Jeanette is the playful, flirtatious and friendly one. Each refers to the other half in third-person, a key symptom for someone suffering from such a condition. In addition, through conversations, the player learns about the traumatic childhood of Therese/Jeanette, where she was in an abusive relationship with her father. This is an accurate portrayal as post-traumatic stress disorder are one of the most common causes attributed to people who suffer from DID (Spiegel, 2).

Through Therese/Jeanette’s background, the game provides a foundation to humanize her character. It also characterizes both of her identities in subtle ways for the sake of suspense and for the consistency of the portrayal of Malkavians. Both Therese and Jeanette are respected by other NPCs in the Bloodlines world, which presents an example of the game providing Malkavians with a safe space in its universe. Seeing the game world treat Malkavians like Therese/Jeanette with respect acts as a deterrent for the player to otherize them for their mental illness. Thus, Bloodlines’ tendency to provide a personal background for its various characters and treating them with respect humanizes characters with mental illnesses and makes it easier for the player to empathize with them.

In a similar vein, Bloodlines presents Dr. Alistair Grout, the patriarch of the Malkavian clan, who not only represents the entire clan politically in the Camarilla, but also happens to be a deeply respected psychologist. The player doesn’t have too many interactions with him until asked to explore his mansion and investigate his disappearance. The player finds out more about Grout’s character through his audio logs, which are scattered across his mansion. Grout is revealed to be an intelligent scientist intent on finding the cure to vampirism, but is burdened by his own paranoia. Bloodlines paints Grout as a genius recluse overwhelmed by his schizophrenia. Though his audio logs often read as diary entries of someone struggling with a serious condition of the mind, this deeply personal perspective provides considerable insight into the daily struggles of someone dealing with schizophrenia. Instead of othering Grout, Bloodlines chooses to portray his struggles realistically, along the lines of what many people with schizophrenia face in their lives. 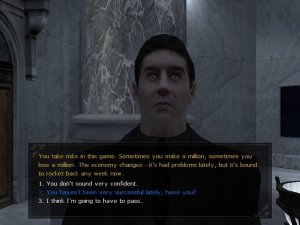 [Figure 2: A Malkavian Player Character in conversation with a NPC]

Bloodlines’ surprising ambition comes to fore when the player assumes the role of a Malkavian character. Unlike other clans, a Malkavian Player Character (PC) has a largely different script and often speaks in convoluted and vague dialogues to other NPCs. Moreover, the dialogue choices offered by Bloodlines change considerably when one is playing as a Malkavian, as the dialogue reflects a vaguely cryptic and opaque tone to a first-time player. However, what is interesting to note is that these very dialogues are designed to serve as foreshadowing to the player on repeat playthroughs. Many of these dialogues subtly hint major revelations well before they are actually scripted to occur in the game’s plot. For example, in Figure 2, the dialogue options provided to a Malkavian PC while they are conversing with an NPC include an option (number 2 in Figure 2) that foreshadows an event where the NPC tricks the players. The dual purpose of the game’s writing suggests a conscious design decision to not just serve different types of players, but also to showcase the insightful, Seer-like knowledge Malkavians have about the future.

To add to this, a Malkavian PC hears soft whispers in the game’s audio signifying the hallucinatory symptoms shared by all members of the Malkavian clan. The simulation of a player-character suffering from the kind of mental illness described above is refreshingly different from how such characters are otherwise portrayed in games. The narrative foreshadowing through convoluted dialogues and hallucinatory whispers in the game audio suggests an experience designed for an advanced player who is already familiar with the game’s storyline. By having the player-character speak cryptically, Bloodlines suggests that while people suffering from mental illness are often relegated to “rambling” when amongst society, their words can also contain a wisdom that may require deeper attention.

Despite Bloodlines’ attempts, it should be noted that the game does not positively portray Malkavians on all fronts. In fact, the game often uses some dialogue options as comic relief in the game by exaggerating their symptomatic behaviour. Two popular sequences in the game often cited as examples of this are the conversations the Malkavian PC has with a STOP sign on the street, as well as one with a TV. In the former example, the Malkavian PC engages the STOP sign in a verbal argument of who can proceed ahead. In both cases, Bloodlines exaggerates the behaviour of the Malkavian PC to almost cartoonish levels through the game’s dialogue in order to draw out the humor. While such humor can be seen as mocking stereotypical behavior of people with mental illnesses, it can also be seen as a rare, light-hearted portrayal of a grim topic inside an equally dark and grim game.

The consistently negative portrayals of people with mental illnesses in horror video games have not only reinforced stigmas by othering them, but have consequently lowered the self-esteem of people suffering through such conditions. Bloodlines offers a refreshingly progressive take by creating a world that treats individuals suffering from mental illness with respect; not only does the game not “other” such individuals, but it shies away from treating symptoms of mental illnesses as indicative of immoral behaviour.

The game displays an empathic portrayal of NPCs suffering from dissociative identity disorder and schizophrenia by humanizing them with a deeply personal, complex background. Yet it is by communicating the symptoms of such mental illnesses to the player through mechanics that Bloodlines achieves maximum empathy. By placing players in the shoes of someone they’re being challenged to understand, Bloodlines encourages them to relate to characters that have been otherwise misrepresented in the medium.