Grayson is an artist and adjunct professor based in Brooklyn, New
York. He currently teaches creative coding and electronics to grads
and undergrads at Hunter College, and is a core member of The
Illuminator, a guerrilla-projection collective. His favorite New York
art space is Babycastles Gallery.

Over the past few years, I’ve been experimenting with video games as a radical art practice. My interests include the sorts of possibilities enabled by Bogost’s idea of Procedural Rhetoric, but also the potential for video games to transform the ways in which we directly engage with politics. The following outlines an ongoing collective art project followed by some of my own work and was adapted from a talk I gave at Different Games 2015.

I’m part of a guerrilla video projection collective known as The Illuminator. To put our history briefly, on November 11th, 2011, group founder Mark Read teamed up with a few other trouble-makers to haul a 12,000 lumen projector (that’s the brightness of 12,000 candles) up to the thirtieth floor of an apartment building across from the infamous Verizon Building in New York City. The action was worked out in parallel to an Occupy Wall Street march of approximately 30,000 people across the Brooklyn Bridge that night. Since then, we’ve projected in ten states and Canada, helped to spawn three other projection groups in the US, and have worked with about a dozen other groups in the United States and abroad. We’ve projected hundreds of videos, images, and interactive games onto buildings across the country, surviving on noncommercial gigs and donations from friends and fans. Run-ins with law enforcement are common, and some of us have been arrested while projecting political messaging.

We see this as a kind of radical media machine for the 99%, those of us who can’t afford giant billboards and television commercials. We work with grassroots activists, large political organizations like Greenpeace, and occasionally create projects of entirely our own design.Though large-scale projections onto high profile buildings in NYC and beyond will always be a favorite tactic, we have begun to use video games as another mode of engagement.

Games are interesting to us for a few reasons. The first is this idea of Procedural Rhetoric put forth by Ian Bogost. For Bogost, software programs are a unique medium in their procedural rules, a flow of loops and state changes governed by conditional elements. Leveraging this idea for the purposes of employing rhetoric is then “the practice of using processes persuasively.” Our 2014 collaboration with the New York Civil Liberties Union aimed to put this into practice.

THE WHEEL OF JUSTICE

This project, The Wheel of Justice, was an interactive wheel which players could spin with a WiiMote. The wheel spun around as fast as the player swung her wrist, showing several Wheel of Fortune style colored pie slices, but instead of dollar amounts they bore words like “Foreclosure” and “Bankruptcy.” The goal of the game (and the larger ACLU-driven “Fix Public Defense Campaign”) is to demonstrate that public defenders are inundated by working class defendants, as opposed to private attorneys who have ample time to properly defend their clients. Justice is therefore commodified, creating a major imbalance in our legal system based on wealth. 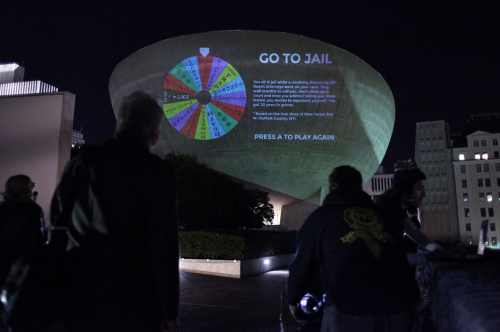 For each spin, the player lands on one of these slices which then relays a documented scenario of a true lived experience of a New Yorker, according to the NYCLU. One such scenario is as follows:

You have full custody of your young son when you are arrested on three-year-old charges. You see a rotating cast of lawyers who never learn the details of your case. While you languish in jail for two years waiting for your trial to start, you lose custody of your son.

* Based on the true story of New Yorker Eric W. (Suffolk County, NY)

By spinning the wheel, the player is confronted with a procedural exploration of the New York public defense system; if bad luck befalls you, or an ordinary infraction becomes wildly problematic due to your economic class, you typically find injustice at the end of each scenario. Each successive play reinforces this rhetoric. We projected this game onto several prominent buildings near the capitol in Albany and invited citizens and politicians to play. Like most of our interventions, the real goal was to document the event and send it out over social media. It was released alongside an online version of the game to expand its reach. The game was well received, and the NYCLU found some success in their campaign to fix the state’s public defense system.

In early 2014, we were approached by Gan Golan about a tax evasion themed game he was working on with Molleindustria, the collective behind The McDonalds Game, Every Day the Same Dream, and Boo Flag. He was calling the game Tax Evaders and wanted us to mod it for urban projection. Like Space Invaders, Tax Evaders puts the player in control of a vertically oriented two-dimensional fixed shooter game. It differs, however, in its thematic content. In Tax Evaders, the player controls a crowd of protesters rather than a single character, and rather than an intergalactic fight for survival, the player must defend herself against an onslaught of austerity caused by corporate tax dodging. When the player destroys the alien epithet for Wells Fargo, for example, the money within is liberated and put towards vital social services.

One destination for the intervention was outside of CitiBank in Union Square. The NYC Light Brigade held LED signs below the game, and someone had brought along huge speakers in another van. 8-bit music and sound effects amplified the soundtrack of Tax Evaders while players used a wireless WiiMote to take down tax-evading corporations. I remember it as one of our most successful public engagements, recruiting a diverse range of players who seemed happy to see something out of the ordinary. And in this way, it struck me that perhaps video games can act as a kind of low-barrier-to-entry to protest culture; we were issuing an invitation to radical political engagement through the seemingly innocuous form of the video game.

During large demonstrations the divide between spectators and protesters is stark. Chants of “come join us!” are typically unsuccessful. By using a video game as a tool for engagement, spectators were easily ushered into the situation, replete with the implied act of trespass inherent in our guerrilla projection. And so they joined our demonstration.

At this point I’m going to diverge from the work of The Illuminator collective and that particular mode of public engagement to talk about my own practice, which takes place primarily on the web. After the Snowden revelations came about, the way in which I perceived of the Internet changed drastically. It was becoming a site of contestation, not unlike the physical sites we contested regularly with The Illuminator. There were areas in which we weren’t supposed to travel on the Net, and there were words we weren’t allowed to speak. The latter came in the form of a list of words the Department of Homeland Security devised in 2012. The status of the list is unclear, and it may have since changed significantly. A Freedom of Information Act Request did glean a copy of the original list, which totaled roughly 750 words.

The definition if paranoia seems to have migrated sufficiently in the past few years, but for anyone still doubting the practical significance of this list, consider the woman who got a visit from the FBI for Googling “pressure cooker.”

All of this struck me not only as an interesting creative context, but also a material system that might be vulnerable. In an effort to jam PRISM and stoke dialogue on government surveillance, I created the NSA Haiku Generator, which takes the aforementioned list of “suspicious search terms” and generates random haiku. The poems are often nonsensical, but at times formulate chilling social critiques:

The poems are meant to be publicly shared, and the project encourages others to easily email, Facebook, and Tweet these creations. The project was picked up by sympathetic journalists, and soon there were thousands of haiku being generated and shared, serving to over-saturate the Internet with these sensitive terms, thereby crippling the surveillance apparatus for a short time.

In light of these results, I started thinking about how this experience might be gamified, to breach the membrane between online play and political action in the vein of the online game ToyWar, which drove down the real stock prices for eToy Inc. In my game Terrorist Threat or Harmless Phrase? the player is confronted with a choice of two words: One word is on the NSA watch list, and the other is from a user-generated database designed to trick the player. The goal of the game is to correctly identify which word or phrase is not being tracked by the NSA. 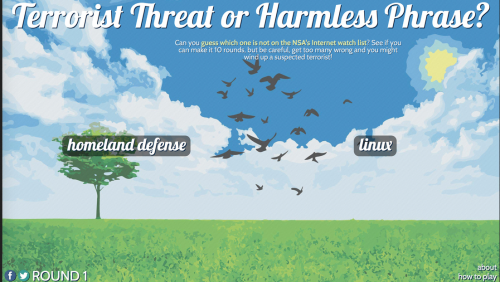 In a nutshell, the player must progress through ten rounds of play. Each round puts forth a choice between the two words, and if the player chooses incorrectly, s/he is alerted with a buzzer. A correct answer brings a friendly gameshow “ding.” Winning the game means successfully making it through all ten rounds without too many mistakes, at which point the player may submit their own false word into the database for future players to encounter. If the player fails too many rounds, however, a Google search query is launched for the surveilled words s/he did not identify correctly. This negative outcome implicates the player in real-world government surveillance, transgressing the division between play and politics. This has of course generated some criticism, as players are not forewarned of this consequence before playing. I argue that this is essential to the piece altogether, and reminds us that none of us agreed to be subjected to the PRISM surveillance apparatus, either.

At the core of the projects I’ve laid out here is a desire to transform audiences into participants. I don’t claim to have stumbled upon the perfect formula for doing so, but I do intend to continue experimenting. A more directly engaged public is imperative to the fight against austerity, racial and economic injustice, government surveillance, and the destruction of the environment. Moving from passivity and clicktivism towards street-level involvement is a difficult transition, but video games may represent a new rhetorical tool for this purpose.

I’m currently in Montreal on a residency at the Technoculture Arts and Gaming centre at Concordia University, developing Protest Protest Revolution! with a team of three others, slated for an exhibition in Holland next year. The Illuminator is currently working on an anti-street harassment arcade game to be installed in public spaces.