Josh Call is Professor and Chair of the English Department at Grand View University where he also directs the Writing Program.  He co-edits the Approaches to Digital Game Studies series (with Gerald Voorhees). His current research explores critical pedagogy and play as a framework for teaching rhetoric and literacy.  He’s having a hard time getting things done thanks to a large mastiff puppy sitting on his feet and wanting to play. 13/10 would pet again.

The idea of games as “difficult” engagements has been popular in both our colloquial conversations around games, as well as some critical discussions.  Much research has been conducted on the function of difficulty as an aspect of immersion and engagement, but less has focused on the particular ludic mechanics that define the difficulty of a play experience.  It seems fair to say that some of the more visible games that fall into this category are FromSoftware’s action RPG ‘Souls’ series. Beginning with Demon’s Souls (2009) and the subsequent Dark Souls trilogy that followed, the franchise has built itself on the idea that to play these games means to willingly embrace the kind of difficulty they afford.  It’s an idea that is seeing considerable success, particularly with the most recent iteration Dark Souls III (2016).  It’s a success that spawned new IPs in the same ludic style via FromSoftware’s Bloodborne (2015), as well as a genre-like methodology that’s been successfully adapted by other titles like Deck-13’s Lords of the Fallen (2014) and The Surge (2017), as well as Team Ninja’s Nioh (2017).

The fact that these games continue to grow in popularity suggests that there is something compelling in their approach to challenge and difficulty that players find appealing, despite their common descriptors for being punishing.  So, what makes difficult games fun?

Christoph Klimmt, Tilo Hartmann, and Andreas Frey (2007) describe the process of player interaction in game scenarios as being a matter of effectance–the degree to which a player can determine the outcome of a game through their own actions. Such efforts directly correlate to enjoyment of game play. Difficulty, in these models, can serve as an impediment to gameplay and enjoyment by working against player input and intention. The one exception to this is the degree to which players can understand their agency in relationship to the difficulty.  Jesper Juul (2009), and Christoph Klimmt (2007) found similar conclusions regarding difficulty: working from a hypothesis that players would resist engagement with difficult games, they found that players only reacted negatively when difficulty could not be mitigated through skillful or thoughtful play. Difficulty, then, is about finding balance on a sliding scale between player agency and the limitations the game places on player actions.

The Dark Souls games typify this kind of engagement.  As a third-person action role-playing game, players have certain expectations of how the game’s mechanics function.  We expect real-time encounters, rather than turn-based gameplay. We anticipate that this means we are expected to respond to the world quickly.  We know that we must move, attack, and dodge at the correct times in order to be successful. We understand that difficulty in these games functions as a matter of pattern recognition, strategic analysis, and responsive behavior. Therefore, Souls players are often unprepared for what happens when they are confronted with new monsters, new patterns, and the various ways the game’s interface limits what information we have access to.

From individual monsters to larger boss fights, player behavior and control can be distilled to three general characteristics:

Each of these three factors represent the degree to which players can manage effectance.  They are the places where the specific skill or literacy players bring to the game, and give them chances to succeed or fail, based on their own abilities.  Souls games require that players study, practice, and iterate responses, all while managing their character data regarding the scenario.  Success is ultimately contingent on how well players adjust to these three tasks.

In turn, games offer several factors that challenge or impede the player’s ability to develop the necessary skills to complete these tasks. They include: 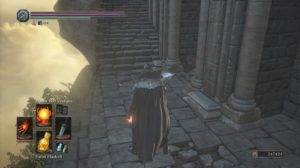 Learning the patterns and placement of every enemy is crucial to success in any Souls game (Dark Souls III pictured here), even when that means accounting for complicated camera angles.

These are layers of the mechanics that add additional factors to the experience.  They don’t strictly prevent players from acting, but they often contribute additional context that requires players’ attention.  Players must contend with the complications of these limitations in order to develop successful strategies for moving forward. Through repetition, player skill progresses to a point where previously difficult tasks become manageable.

The combination of these player/game affordances are what make the functional difficulty of a Souls game work.  Indeed, setting aside the largely unstructured game narrative, the consistent application and management of these basic tasks against the games mechanics for limiting player agency define the bulk of the experience.  While the game includes internal systems for increasing difficulty (the New Game+ experience, for example), these systems ultimately do not impact the primary conditions that drive limits to effectance. Each iteration of New Game+ past the first (until an increase cap at New Game +7) changes some of the mathematical mechanics, but little else.  Decreasing player damage, increasing monster damage, and increasing monster hit points do not substantially change the game’s difficulty in any definitive sense. Ultimately, the core conditions necessary for success remain unchanged. Difficulty is progressive in that it reduces error tolerance, but never actually functions as a barrier to success.  Death and loss are merely an inevitable byproduct of moving through the game, and the game doesn’t simply end with character death. Instead, the player is returned to the nearest checkpoint, and loses any items or souls (the game currency for items and experience points). The message is clear: learn more and try again.

The process of continually cycling through attempts in the game is the most visible facet of difficulty at play in these games.  The experience is built with the expectation of continued loss and trial-and-error. Regardless of how well the player memorizes the game, or how well they might execute optimal strategies, character death and game difficulty are still an ever-present reality due to the progressive and scaling nature of the effectance curve.  In effect, this model of difficulty is about negotiating and mitigating the continuous presence of losing conditions. Failure is constant, ever-present, and to a certain extent, beyond the scope of player control. Despite this, Souls games remain an incredibly popular and successful franchise with a significant following. Players continue to engage and play, despite the punishing efforts of the game to thwart them.

Contending with these realities requires players to come up with creative solutions.  Like many other games, we simply don’t do it alone. Successful completion of the challenges represented in the Souls franchise comes with exhaustive work by the collective metagaming efforts of the player community.  Souls games are, at their core, about collective social playing.  From the first game in the franchise, players have been invited to generate in-game messages to each other which appear in the game world in the form of glowing, esoteric script.  These messages, while short, often give crucial hints about coming monsters, challenges, or hidden secrets. They serve as a vehicle for inviting other players into the world as either friends to help, or PvP enemies to be dealt with.  It was inevitable that a game already built to be a social experience would naturally grow beyond the boundaries of what its in-game messages would allow.

This level of metagaming is neither new, nor unique.  To effectively metagame here requires that players attend to a kind of strategic analysis, or topological map of the game’s possibilities to determine how to achieve their desired outcome (Call 2012, Boluk and LeMieux, 2017).  For Souls games, this often accompanies an attempt to understand the game’s character data, which is uniquely coded and not always transparent.  Individual character statistics have multiple layers of meaning and value that are often communicated through the game’s interface. While this ambiguity functions as a layer of the game’s difficulty, making sense of the data and using it productively often requires information that is outside the game.  This obviously echoes Christopher Paul’s arguments about the function of theorycraft in online and multiplayer games (2011). 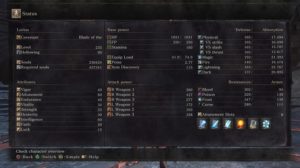 Dark Souls III character data, like most RPGs relies on numerical computations.  The proportionate results of changes made to these data often require the use of external wiki spaces to be meaningfully used.

This work is often done through crowdsourced efforts of online wiki spaces and forums, what James Gee would call affinity spaces where knowledge is collectively shared, vetted, and disseminated within the community (2007, Gee and Hayes 2012).  The general characteristics of affinity spaces work in concert with the metagame tendency of players by privileging the “common endeavor” of the game itself and encouraging “intensive and extensive knowledge” as well as “individual and distributed knowledge” (Gee 2007).  Players come together, sharing not only the particulars of their specific play experience, but a kind of accountable history of the information they gather. The collected knowledge is socially vetted, confirmed and parsed, and then disseminated. In effect, this allows players to generate a kind of map (in both the geographic and ludic senses of the word) of the game and its possible outcomes, accounting for multiple permutations of individual encounters. This, then, becomes a basis for players to plan out possible actions in the game according to optimal strategies, as discussed by both Mia Consalvo in her extensive work on player cheating (2007), and Daniel Ashton and James Newman’s approach to player-generated walkthroughs (2012).  These community play practices often extend the possibilities of a game beyond those initially imagined by designers, allowing players to develop not only new strategies but new ways to engage. More importantly, they represent a kind of sociomaterial literacy by arching play approaches and engagements for other to follow, modify, or even challenge. 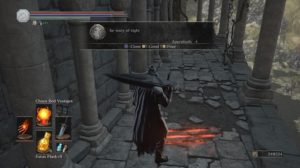 In game messages from other players can often signal useful information, or can equally be used to misdirect or mislead.

As useful and often necessary as this information is, it still requires a significant amount of practice and habituation from the player to effectively utilize.  Knowing and doing are distinct things. Learning how to apply metagame knowledge still requires trial and error as players work to develop their responses to fluid, rapidly-shifting challenges.  Functionally, this amounts to habituated training. Gilleade, Dix, and Allanson (2005) describe engaging with difficulty as a function of training (among other things) affective conditions for player response.  One of the goals of this training is to build increasing tolerance for failure to sustain engagement. In other words, make failure and character death a part of the learning curve, and you can embrace the experience while getting better at the game.

Metagaming, then, doesn’t so much provide the answer to difficulty, as it does help fill in a piece of the puzzle.  How players habitually apply–or even ignore–the information made available by others impacts the outcomes of how they play.  This is, perhaps, one of the greatest appeals of the Souls franchise; each Souls game affords multiple possibilities for players to decide how to negotiate the difficulties they present.  The joy is in finding an approach–either your own or one developed by the community–and testing its limits to see how far it can go.

Serrels, Mark. “Why the Hell do we Keep Playing Difficult Video Games.”  Kotaku, May 6th 2014.