Josh Wood currently serves as Assistant Teaching Professor in Syracuse University’s Department of Writing Studies, Rhetoric, and Composition. He earned his PhD from Clemson’s transdiciplinary program in Rhetorics, Communication, and Information Design. His research focuses on the intersection of cultural rhetorics and new media, with a particular emphasis on games. He also occasionally designs indie games and is an infrequent fiction writer.

As a child of the 90s, growing up in the Southern United States, Disney’s Pocahontas (1995) became a touchstone for me. Beyond the film itself and the music, I vividly remember playing the video game adaptation (Disney Interactive, 1996) for the film. The game was only released on Sega Genesis, and it was a game I spent a large amount of time with. The game seems strange in retrospect—a puzzle platformer with no enemies to overpower. Rather, gameplay in this instance focuses on the simple mechanics of platforming, made more difficult by obstacles such as fallen trees or gulfs that were too wide to cross on your own.

The game’s theme was centered around a relationship with nature. In an opening screen, players are presented with instructions, depicted as if from the character of Kekata, the shaman from the movie (Fig 1). “Your path will be difficult,” he says, “but all around you are animal spirits.” In order to gain abilities and overcome obstacles in Pocahontas’s path, players help animals out of trouble and, in exchange, receive powers to help solve the game’s puzzles. As if to drive home the game’s theme of cooperation with nature, Pocahontas is accompanied by a racoon, Meeko, featured in the film, and players can switch between the two avatars depending on the needs of the game. 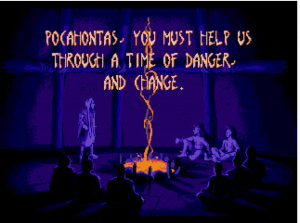 A shadowy figure speaks to an audience of other natives in the opening of the Pocahontas game. He says, “Pocahontas, you must help us through a time of danger, and change.”

Even now, it seems a novel idea that the game would feature a drastically different approach to gameplay than other games of the time. Even other Disney tie-ins of the same generation featured hordes of enemies requiring defeat; though the film Aladdin (1992) featured a protagonist who relied on wits to solve problems, the game adaptation (Disney Interactive, 1993) gave Aladdin a sword for most of its levels. Scratching beneath the surface of Pocahontas’s mechanics, however, reveals not a nuanced look at game design based on indigenous ways of knowing but rather an essentialized representation based on the related film’s already troubled representation of a generic, somewhat stereotypical version of Native American ways of being.

As a child, I didn’t much question the lessons of the game itself. But as an adult, I found myself looking back at the game with the benefit of hindsight framed by a knowledge and deeper appreciation of Indigenous ways of being in the world, as well as the work of survivance and decolonization. I designed The Burden on Our Back as a remix and response to this problematic representation of Indigenous relations with the world. Where Disney Interactive’s game stayed close to the surface, this “remixed” response would dig into Nahua ways of survivance.

The representations in The Burden on Our Back of modern Nahua life are themselves a representation of Nahua survivance, of tying oneself into the past through the mechanism of story. I work here with a notion of survivance that is rooted in Gerald Vizenor’s (1999) understanding of the term as rooted in storytelling. Pocahontas, the game that my own platformer is based on, is a representation rooted in dominance. Representations in Pocahontas become hollow, “the absence of the real in the ruins of tribal representations” (Vizenor p. 8). In contrast, Vizenor posits survivance as a means of opposing such empty representations with representations that “create a new tribal presence in stories” (p. 12). Grace Dillon’s (2016) quick definition of survivance as a practice that “asserts Native presence and pushes back against the assumption that the only historical identity available to Indians in a post-Manifest Destiny world is that of victim” (p. 2) is also instructive. In both cases, representations of Native presence operate against dominant narratives of Indigenous erasure. Burden acts in the same way, using a graphic style rooted in Classical Nahua illustrations, those known most widely through Aztec records, to subvert the idea that the Nahua people have been consigned to history.

Before Spanish settlers arrived in the Americas, Nahuas were the most populous ethnic group in Mesoamerica. The largest alliance of city-states was what we now refer to as Aztecs, the Triple Alliance (consisting of the city-states of Mexico-Tenochtitlan, Texcoco, and Tlacopan). But this was hardly the only community. Today, Nahua communities exist in pockets throughout Central America, and Nahua culture and language continue to have an influence on Mexican culture and beyond. Chicano artists in the United States frequently use Aztec and Nahua imagery in an effort to recover an indigenous past, and the Chicano Movement as a whole sought a return to the indigenous roots of Mexican-American identity, most easily associated with Nahuas. 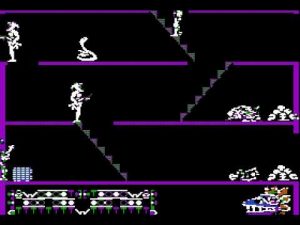 White figures traverse various levels of purple platforms. Some of the figures include snakes and human-figures holding spears and wearing what appear to be helmets shaped like birds.

If Nahua culture is imagined in games at all, it is seen as a dead thing, understood through the lens of the Aztec Empire, the primary signifier by which the Western world knows the Nahua people. One early game for the Apple II, simply titled Aztec (Datamost, 1982), saw players take the role of a Fedora-clad adventurer exploring Aztec tombs and facing Aztec warriors, serpents, and other beasts (Fig. 2). It fit into a pattern of games wherein players were cast as a white settler-colonial avatar and given a world to explore and conquer.

These games of conquest and colonization establish some of the most longstanding semiotic patterns for the representation of Latin American culture, as well as some of the key symbolic tokens or anthropological objects that signify “Latin American culture” within the video game medium: skeletons and temples, exploration and invasion, gold and jungles, serpents and jaguars (Penix-Tadsen, 2016, p. 153).

Games that do use Nahua imagery frequently go back to this well. Even the Civilization (Various Developers, 1991-2016) series features a representation of Aztec culture (fig 3) that is heavily dependent on the concept of human sacrifice. In doing so, the game industry aids in the erasure of the complexities of Nahua culture from the public mind. 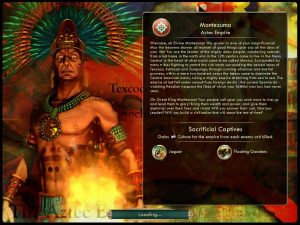 A picture of Aztec leader Montezuma in front of a flame. He wears a ceremonial headdress with peacock feathers and a golden skull and sneers toward the viewer.

The Burden on Our Back exists as a subversion of the aforementioned Pocahontas video game through what Mary Flanagan (2009) identifies as re-skinning, wherein players “make alternative arrangements and disguise” their avatars for “subversive roles” (p. 33). While some of the game mechanics are borrowed from Disney’s Pocahontas game (the collection of power-ups to solve problems), these are not ground-breaking mechanics. Indeed, the game originally did nothing groundbreaking and went relatively unnoticed. But Pocahontas’s means of depicting Indigenous life is steeped in Disney’s reliance on cliché images of a Native “zodiac,” itself a false image. The art in the game is created from scratch, and the mechanics that Burden borrows from Pocahontas are considered staples of the platformer genre. These can be recreated in the Unity game engine (as Burden has been) using a mix of prebuilt tools and a modest knowledge of coding.

The art style of the game is itself intended to mirror the style of Nahua pictorial manuscripts from before the Spanish Conquest, with the player assuming the role of a nondescript figure from one of the codices. But the artwork also includes references to present struggle in Nahua communities. Players encounter a man dressed in plainclothes, referred to in dialogue only as a warrior. This character’s design is reminiscent of images of José Lucio Bartolo Faustino, a community organizer in the state of Guerrero, Mexico, which boasts a large indigenous population (Fig. 4). Before his murder, Faustino campaigned for Nahua sovereignty and organized to protect Nahua land. Curandero/as such as the one in the game still play an integral part in Nahua society. The painter in the game, dubbed “Tlacuilo,” mentions painting a history on amate, a method still employed by Nahua crafters, which are in turn sold as a means of survival (Farfán and Celestino, 2003). 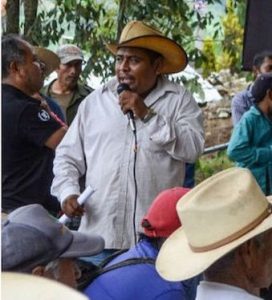 José Lucio Bartolo Faustino, a Nahua activist, pictured speaking to a crowd on a microphone. He was murdered in 2019 while involved in efforts to maintain indigenous sovereignty.

Burden functions as a conscious exploration of what Michelle Lee Brown (2017) dubs “(re)mediation. A form which could take up these past memories, epistemological shifts, and lived experiences…. I am not glibly assigning the prefix to create some sort of Indigenous media theory chimera, but to invoke these generational, old-yet- new understandings” (p. 26). The game sits in this space of (re)mediation, taking up past knowledge and lived experience and passing them on in a manner fitting to Nahua ways of being. It opens with a quote from Bernardino de Sahagún’s Colloquios y Doctrina Cristiana, ostensibly from an initial encounter between Nahua and Spanish parties, to illustrate the worldview of the Nahua, and its deep ties to ancestry and generational knowledge. The Nahua here “speak of ‘in huehue tlamanitiliztli’ (the lifeway established by the ancients), ‘neltizlitli’ (rootedness), ‘ohtli’ (path), and ‘ohtlatoca’ (following a path)” (Maffie, 2012, p. 5). In the same way that Pocahontas set the stage with its opening scene, this initial screen aims to set the stage not merely for the game’s story or mechanics, but for the knowledge communicated therein.

This screen introduces concepts into a space that is at once similar and unfamiliar. The platformer genre may not necessarily be a Western invention (Donkey Kong, 1981, made by Nintendo, is typically cited as the first platformer, and it was created by a Japanese company, albeit for a Western audience), but it is a prevalent genre in Western video games. The positioning of Nahua iconography within the confines of a Western genre seeks to create something new: communicating a story that settler-colonialism has attempted to erase. In the same way that Nahua women paint their own history onto amate to sell to American tourists, Burden presents an opportunity to subvert expectations and sneak in the truth of Nahua existence to an audience unaccustomed to it. The game presents players with a stark contrast to traditional bloody images of Aztecs: Nahua history is vast, it is rich, and it continues to this day.

Though the game limits itself from imagining a Nahua future, one crucial first step is to build a history of the Nahua counter to the dominant narrative of settler-colonialism. The game occupies this space, subverting the  narratives of erasure around Indigenous Mexicans. But building once again on Dillon (2016), “Indigneous Futurisms are not the product of a victimized people’s wishful amelioration of their past, but instead a continuation of a spiritual and cultural path that remains unbroken by genocide and war” (p.2). The Burden on Our Back represents that path but also positions the player as having a key role therein. It is, at heart, an imperfect first step on a larger journey of imagining such Nahua futures.

Townsend, C. (2017). Annals of Native America: How the Nahuas of Colonial Mexico Kept Their History Alive. New York: Oxford UP.