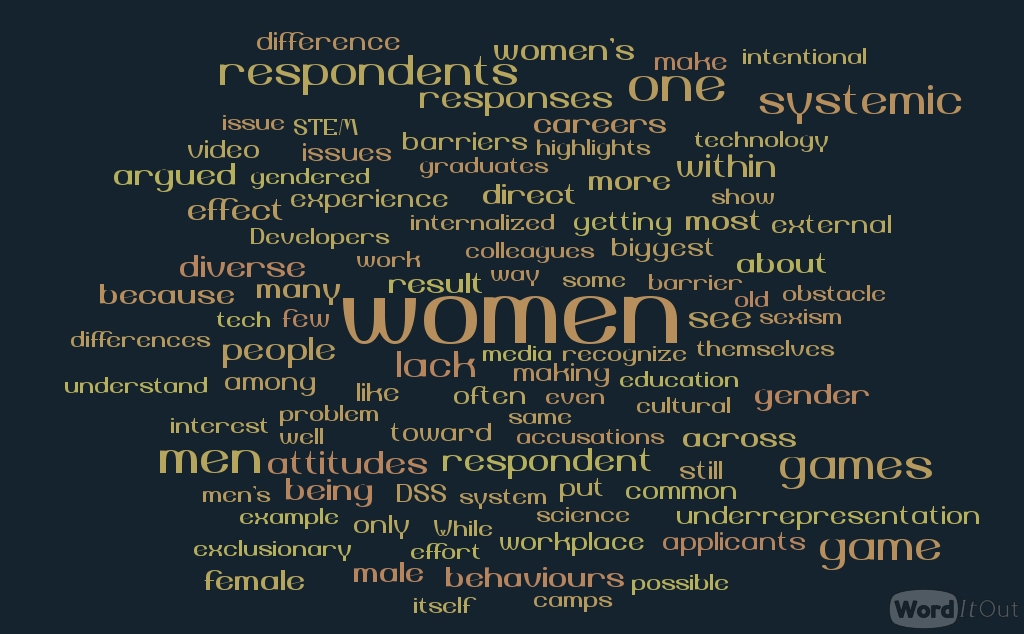 Victoria O’Meara is a PhD Candidate in Media Studies at Western University. She is interested in issues of labour and gender in the video game industry and beyond. Her dissertation is grappling with the increasingly tenuous border between work and leisure in the digital media economy.

Chandell Gosse is a Media Studies PhD Candidate in the Faculty of Information and Media Studies at Western University. Her dissertation looks at how people understand and react to cyberviolence and online abuse, but she is also interested in digital culture(s), ethics, and the public sphere more broadly.

Marie-Josée Legault teaches labour relations at Téluq, where she is also responsible of a master program in HRM in project-based organisations. She’s currently pursuing research on videogame developers as knowledge workers in project-managed organisations since 2000. A detailed list of professional activities is available online: Marie-Josée Legault  and many papers are available in open access: Résultat de la recherche ET Résultat de la recherche.

Johanna Weststar is an Associate Professor in the DAN Department of Management & Organizational Studies. She researches union renewal, worker representation and citizenship at work under which she studies video game developers as well as pension plan governance. Many articles can be found in open access at: GameQoL and Johanna Weststar.

The lack of gendered diversity within the video game industry is well documented. Research suggests that only 22% of the video game workforce identifies as female, a figure that declines further to 11% when we look only at core technical positions (Weststar et al., 2016). The issue of women’s underrepresentation, as well as sexism across the industry and culture, has become the subject of heated debate in recent years. The events of GamerGate in 2014, where female games journalists, developers, and critics became the targets of misogynistic abuse, stand out as a poignant example of the polemic nature of this topic.

In an effort to better understand this lack of gendered diversity, the International Game Developers Association’s (IGDA) Developers Satisfaction Survey (DSS) now includes a series of questions about diversity. The section asks respondents about the various forms of inequity they have experienced or witnessed across identity markers of gender and race, how they define obstacles to improving diversity, and what they see as possible solutions.

In this article we use open-ended responses from the 2014 and 2015 DSS to highlight the contrasting ways men and women view the challenge of low female representation in the industry. Of course, women’s underrepresentation is the result of many different and layered issues that mirror the systemic discrimination that women face across male-dominated spaces. However, the data from the DSS show us that there are differences in what men and women see as the primary reasons for this underrepresentation.  These differences reflect an important chasm in how the problem is experienced across gender.

Male respondents typically emphasized barriers that were external to the industry itself and therefore were seemingly insulated from accusations of direct discrimination. On the other hand, female respondents largely focused on systemic discrimination by discussing how the internalized attitudes and beliefs of existing industry members act as a hindrance to diversity.

The difference in responses across gender, then, points to a crucial difference in experience, and highlights the invisibility of systemic discrimination for those who do not experience it.

Accounting for the Lack of Diversity: Men’s Perspectives

A common sentiment among male respondents was that the lack of gendered diversity is the result of issues that are external to the industry itself.  They argued that few diverse candidates applied for jobs in the industry or that they struggled to find qualified applicants who were not white and male. This explanation was pervasive; it was the most common response among men in 2014, and the second in 2015. One respondent put it this way: “The biggest obstacle I can see is in getting diverse enough applicants. You can have the most progressive policies and atmosphere possible but if you’re not getting diverse candidates then you won’t get a diverse workforce.” Responses within this theme suggest that more people from underrepresented groups would be hired if they only presented themselves on the industry’s doorstep. Often, respondents used an essentialist argument, suggesting that women do not apply because they have no interest in games or technology. For example, one respondent explains, “All permutation[s] of races, ethnicity, genders, etc., are not equally interested in developing games. There isn’t some massive conspiracy of oppression.”

Other times respondents suggested that more nebulous societal pressures funnel women into fields deemed more ‘feminine.’ As one respondent put it, the biggest obstacle to diversity is:

[The] early discouragement of women in getting into game development (and tech careers in general). I am involved with various teaching organizations (e.g. nonprofit summer camps in game design for kids). During recruitment at e.g. events for young children[,] I can already start to see parents steering their daughters away from tech camps and toward perceived female-oriented camps.

Related to claims that there are no diverse applicants was the argument that the education system fails to produce female graduates from science, technology, engineering and mathematics (STEM) programs. As such, few women are educated to pursue careers in the industry. This was the second most commonly cited barrier to diversity among men in 2014. As one of the male respondents put it:

You look at the Computer Science department at the local University – very few women or minorities. As a result, there is much less diversity when it comes time to hire qualified graduates. What we really need is a bigger push for diversity in STEM fields all the way back in grade school.

Lastly, men also argued that negative media coverage of the industry discouraged diverse applicants from pursuing game-related careers. This was the number one reason for a lack of diversity among men in 2015. For example, one respondent said:

At the moment the biggest obstacle is a massive stigma the games industry has created for itself. With a media storm of accusations about the game industry being sexist, racist and misogynistic I would expect many to avoid the industry based on the reputation alone. We need to show the good and not just the bad if we want to make this industry as inclusive as possible.

These explanations share an externalizing quality, wherein respondents distance themselves and the industry from problems with diversity. For these participants, the gender imbalance persists because women themselves show no interest in games careers, the education system fails to produce women STEM graduates, or the press fixates on negative stories that discourage women from participating. In the absence of any intentional effort to restrict women’s access, these respondents see the problem as residing elsewhere—as external to the industry. One respondent clearly summarized this perspective:

At no point is there any human element, which can actively stop you from starting a company or making games. So why aren’t women or immigrants making games? I don’t know, but it would then seem to be an issue of interest. Do immigrant cultures frown on game development? Are women still discouraged from studying science and technology? (Yes to the last one, though getting better).

Accounting for the Lack of Diversity: Women’s Perspectives

The way women framed the obstacles preventing industry diversity differed from men in revealing ways. While men’s attention was outwardly directed, women emphasized the internalized biases and behaviours of those working within the industry. One of the most common reasons women gave for the lack of diversity was that their colleagues and superiors expressed ignorant or indifferent attitudes toward the topic. As one respondent explained, “It’s still an old boys club, and most of the old boys don’t even see that there is a problem.” Another argued:

People […] refuse to acknowledge the existence and harmfulness of prejudices in the industry/games we make. Until people both acknowledge these problems and actually work towards fixing them instead of endlessly debating whether they do/do not even exist, we will keep losing the people who have to work ten times as hard to fit in and be respected by this industry.

Comments like these were common and seemed to respond directly to men’s emphasis on external barriers to entry. For many women, it is precisely because their colleagues do not recognize that discrimination circulates within the industry that so few women pursue lifelong careers in games. As the above comment highlights, sexism and prejudices within the content of the games being made also have an exclusionary effect because this marginalizing or objectifying imagery and narrative is the backdrop to the work space.

Women further argued that attitudes like these that minimize the existence of discrimination only functioned to normalize or obscure sexist behaviours. As one explained:

I feel like the biggest thing isn’t overt discrimination (Gamergate, old fashion racism/sexism), but covert behavior that people don’t readily recognize or understand why it’s hurtful. When I start talking to men, they honestly don’t understand why it’s wrong to be flirty or to joke about a woman being bad at games or tech. They think of the flirting a[s] complimentary, and the jokes being the same things they would say to a male friend. A lot of men just aren’t aware of what the daily difficulties are for [w]omen, that being catcalled on the street feels the same as someone older than you making jokes about being handsy.

These behaviours, and the attitudes they evince, may not be intentionally exclusionary, but in effect they still function to systematically discriminate against women, making them feel alienated or uncomfortable in the workplace (see more in Weststar, O’Meara, Gosse, & Legault, 2017). Women reported that these operate at the level of workplace culture, as in the comment presented above, but that they also impact recruitment and promotion norms. As one respondent put it, there are “Entrenched, outdated attitudes and some people with power to make the decisions [do] not car[e] enough to make change happen (We’d love to hire women but none applied, so that’s that!).” Another argued, “Managers [are] “comfortable” with certain types of people – hiring someone different can change the atmosphere. Not realising how important diversity is to a workplace as well as the projects.”

In these comments, women continually argued that the lack of women in games is a reflection of cultural attitudes within the industry more than it is of individual choice. They suggested that the major barrier to diversity is rooted in the internalized biases, snide remarks, everyday sexism, and general oblivion toward such issues exhibited by many of their colleagues. Furthermore, they explain that this ignorance and indifference manifests as exclusionary behaviours, and in effect, maintains a systemic form of discrimination.

Reflecting On the Significance

The differences in responses between men and women highlights a crucial difference in experience, and one that resonates beyond the video game industry (Fussell, 2016). The recently leaked Google memo that attributed women’s underrepresentation at Google to their biological shortcomings, acts as case in point (Conger 2017). Like the memo’s author, the responses from many men in the DSS overlook the role of internal cultural mores in perpetuating some barriers to diversity (Molteni & Rogers, 2017). These responses function to distance them from accusations of direct discrimination. While they recognize a gender imbalance, respondents maintain that this reality is not a result of internal workplace dynamics, because there is no intentional effort to bar women from entry. Instead, this is an issue of supply, reflective of the choices of women, the education system, or the media. By contrast, women’s responses reflect the lived experience of systemic discrimination that undermines their progress at every turn. For them, the presence or absence of intention does little to mitigate the effect of inequity that ultimately acts as a barrier to their access and progress within the industry. It is the ignorance and apathy toward issues of diversity and the behaviours such attitudes breed that manifests as systemic discrimination. This discrimination is often invisible to men and profoundly felt by women.

Fussel, S. (2016, December 1). The Men Who Run Startups Blame the Lack of Diversity on Everyone Else. Gizmodo.