Katja Rogers is a Computer Science PhD student from the Institute of Media Informatics at Ulm University, Germany. As a visiting researcher at the University of Waterloo, her project focused on the effects of audio on player experience in a VR horror game. Her previous projects involved topics such as NPC design, evolutionary algorithms, persuasive and pervasive games, as well as augmented reality. END_OF_DOCUMENT_TOKEN_TO_BE_REPLACED

Within the domain of educational technology, new pedagogical approaches and technologies have been “disrupting” the status quo of teaching and learning practices, which have in turn become mainstream and then been accepted as the “new” norm. In recent years, digital platforms, ranging from e-learning and simulation platforms to digital games and mobile applications aiming to enhance engagement, have provided alternative means and options for the way learning content is delivered and consumed. However, there is danger that a learner’s focus is further fragmented by these “disruptions.” Furthermore, dependence on different online and digital platforms for facilitating learning could lead to disconnections between learners’ engagement with the different sources and disparities between the virtual/digital and real knowledge, capabilities, confidence and self-awareness (Warburton, 2009; Arnab et al., 2011). END_OF_DOCUMENT_TOKEN_TO_BE_REPLACED 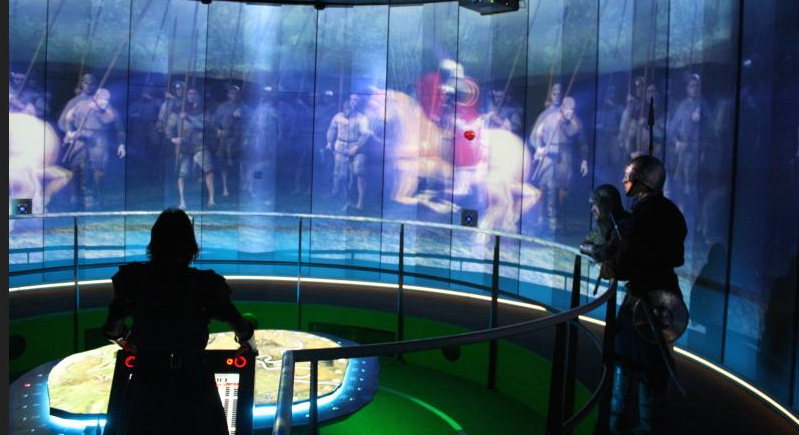 During the First War of Scottish Independence, the Battle of Bannockburn was a significant victory for the Scottish army, defeating the much larger English forces. Since the battle took place in 1314, its location has become a significant historical site, studied by archeologists and historians and preserved through the efforts of the Bannockburn Preservation Committee, the National Trust for Scotland, and Historic Scotland. While the initial visitor center at the site, the Bannockburn Heritage Centre, opened in the 1960s, it was closed in 2012 to be replaced by a new building opened in March 2014 in time to celebrate the 700th anniversary of the battle. Today, the site’s modern facilities welcome visitors with a gift shop, café, and two “Battle Room Experiences”: the Battle Show, a brief narration illustrated by tabletop map projection, and the Battle Game, which takes place using the same projection system and is overseen by a Battlemaster. END_OF_DOCUMENT_TOKEN_TO_BE_REPLACED

Trying to change education towards a more innovative, creative and game-based learning approach is not a single-player game. There is a need for a huge amount of research and educational innovation projects before making educational actors promote digital games as a learning strategy. Just after my Ph.D, I was lucky to join a research network, a sort of a “research guild” for promoting mutual help, creating joint events and develop academic exchanges. Our “research guild” was funded by the 7th framework of research of the European Commission as a network of excellence, the “Games and Learning Alliance” (GaLA 2009-2013). The GaLA network included nearly 50 researchers in the field of digital games with educational, health, cultural purpose, also called “serious games”. Being part of an international research guild allowed me to access a higher level through collaborations with other scholars worldwide. Being in a guild required me to join efforts in topics and tasks that were out of my reach in an individual or small team perspective. Being part of a research guild is fruitful in terms of networking and outcomes. END_OF_DOCUMENT_TOKEN_TO_BE_REPLACED

It has been foretold that Games will define the nature of media in the 21st century[1]. As with any expanding media form, games have splintered into smaller and smaller sub-genres. Serious Games is one of these sub-genres, and my field of practice at my studio Antidote Games. The use of games to resolve topics with real world consequences is commonly referred to as Serious Games. Usually, the conversation around games splits into the familiar AAA vs Indie divide, and there is a similar divide between games for pleasure or games for social justice. The separation into games for “fun” and games for “change” has given new life to the exploration of serious “real-world” topics in game making. While a lot of this conversation circles around unfamiliar narrative paths being explored in autobiographical games and games that contextualize unfamiliar topics for players in the west, my interest is in opening up a part of Serious Games that rarely get discussed, much less critiqued: games made for people in non-western countries as part of aid or educational programs. END_OF_DOCUMENT_TOKEN_TO_BE_REPLACED

Jeff Watson is an artist, designer, researcher, and Assistant Professor of Interactive Media and Games at the USC School of Cinematic Arts. His work investigates how game design, pervasive computing, and social media can enable new forms of storytelling, participation, and learning.… END_OF_DOCUMENT_TOKEN_TO_BE_REPLACED