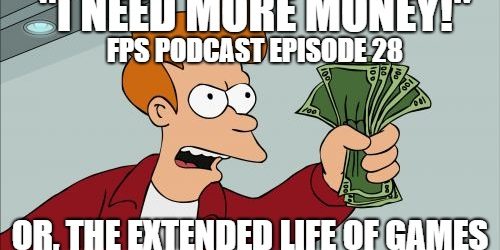 In this month’s podcast, Pierson, Rob, Betsy and Will discuss the trend towards “games as services” rather than one-off products. They also consider whether there is an increasing tendency towards specialized consumption of specific games. If we are playing a smaller number of games for longer periods of time, are these new developments in game consumption habits? How might changes in making, selling and distributing games be involved in the reasons we are playing specific games longer? END_OF_DOCUMENT_TOKEN_TO_BE_REPLACED

In this month’s podcast, we discussed Dream Daddy, an interactive visual novel developed and published in 2017 by Game Grumps that describes itself on its Steam storefront page as “a game where you play as a Dad and your goal is to meet and romance other Hot Dads”. So far, so good. Given the dearth of games catering to explicitly queer players, the FPS staff were naturally thrilled to have such a game and were eager to sit down to discuss it. As a bunch of gay and queer-identifying scholars, some of whom conduct research on queer representations in media objects, we had much to discuss about this game. END_OF_DOCUMENT_TOKEN_TO_BE_REPLACED

In our January 2018 podcast, Betsy, Chris, Will and Justin discuss their picks for games of the year, with a twist: categories ranged from the social (“Fine, stop yelling I’ll play it award”) to the academic (“game that made me rethink my research”). FPS has previously experimented with alternative formats for game of the year awards before, asking podcast participants last year to focus on the games that resonated with them most and to reflect critically on the awards themselves in the year before. Stick around for the end of this year’s podcast, when the FPS crew each discuss their one true game of the year. END_OF_DOCUMENT_TOKEN_TO_BE_REPLACED

What makes a stealth action game? Among the titles discussed in this podcast, including (and predominantly) the Metal Gear Solid series, Assassin’s Creed, Hitman, Splinter Cell, Batman: Arkham Asylum and, to some extent, Horizon Zero Dawn, a distinction was placed between stealth as a procedural mechanic baked into all aspects of the game design and stealth as an additional option afforded to players. END_OF_DOCUMENT_TOKEN_TO_BE_REPLACED

Confession: the subject for this podcast was selected without my having the first clue as to its contents. Before the start of this month I had never heard of Love Nikki-Dress UP Queen (2017), knew almost as little about mobile games (does one go to the Pokemon, or is it that the Pokemon go with you?), and I certainly was unfamiliar with any controversy involving Love Nikki’s procedural dress-up competition mechanics. END_OF_DOCUMENT_TOKEN_TO_BE_REPLACED 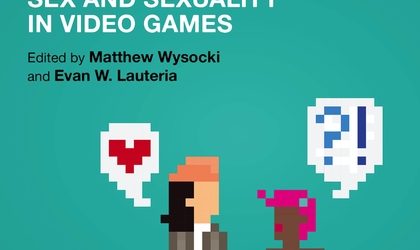 Over the past few years, games have begun to feature sexual content that is increasingly nuanced, and which moves away from the conspicuous treatments that have fueled political outcries in the past. Rated M for Mature seeks to offer a sustained scholarly response to these developments, to foster critical debates of sex in video games, and to push for new considerations and even implementations of sexuality in games. The collection of essays is categorized into three distinct sections: the first, “The (r)evolution of video games and sex”, examines the history of sexual content in video games and the varying political and social responses; the second, “Video games and sexual (dis)embodiment”, explores the use of sex and sexuality in both video game play and practice; the third, “Systems/spaces of sexual (im)possibilities”, considers the interplay between sexual content and game design. END_OF_DOCUMENT_TOKEN_TO_BE_REPLACED

In-game screenshots are by no means a new phenomenon; publishers have long used the techniques of live-action photography to capture scenes of their video games for use as advertising materials. So too have gamers had the opportunity to take screenshots during play for later reflection and sharing. The photo editor mode in TLOUR is unique in that it does not require technological literacy, such as modding or coding, to operate this feature. A player does not need specialized skills beyond the ability to play the game in order to take photos. This democratization of game photography may be another commercial impetus, a means of Naughty Dog to get more people creating promotional content for their game, but it also enables a new means of play and self-expression. END_OF_DOCUMENT_TOKEN_TO_BE_REPLACED