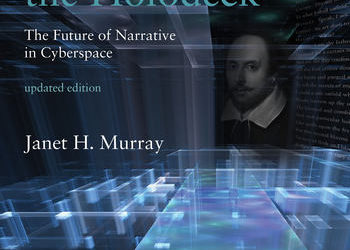 When Hamlet on the Holodeck came out in 1997 it became the catalyst for a foundational debate in Game Studies, the tension between stories and games as distinct genres of human expression. I have never changed my own position on this controversy. I believe that games and stories are both forms of representation (neither one is more “real” than the other) and that they have shared many structural elements from ancient times onward as they continue to do in emerging digital forms. I reviewed the controversy again for the new edition of Hamlet on the Holodeck, updated and reissued from MIT Press this year, noting how the self-described “ludologists” had come to accept narrative strategies as legitimate parts of game design, and how many players had responded enthusiastically to new interactive narrative formats. END_OF_DOCUMENT_TOKEN_TO_BE_REPLACED

What does it mean to be immersed in something?

This is a question I’ve been asking myself for the last year or so. As a member of the Games Institute, which is part of the IMMERSe network, this question is one that pretty much pervades my 9-5 existence. It’s not always at the forefront, but it’s always there. END_OF_DOCUMENT_TOKEN_TO_BE_REPLACED

Terrorism, as one such political narrative, has remained at the forefront of public consciousness to varying degrees since September 11 2001, but in particular has been retooled and pulled in new directions over the last couple of years by the Government of Canada under Conservative Party leader and Prime Minister Stephen Harper. While all kinds of video games have tackled the subject of terrorism over the years, one unlikely franchise has echoed with uncanny fidelity the trajectory that terrorism as a narrative has followed under Conservative governance: Mega Man X, originally developed and published by Capcom for the Super Nintendo Entertainment System in 1993. END_OF_DOCUMENT_TOKEN_TO_BE_REPLACED

Educational and/or serious videogames have seldom been popular among mainstream game audiences, but that hasn’t stopped the recent onslaught of indie developers from trying to use their games to explore complex themes outside the realm of pure entertainment. Games that try to engage players in meaningful play are often criticized for not being enjoyable. Yet, is that because they aren’t well designed, or is it because audiences aren’t used to games that don’t try to heavily immerse them in computer graphics? END_OF_DOCUMENT_TOKEN_TO_BE_REPLACED