Ann Takamaki is the only ‘band member’ who appears to resent the role given to her, and she is clearly cast as ‘the sexy one’. Often, ‘the sexy one’ translates to vacuousness or lack of intelligence. Being sexy and being a bimbo are often the same things when it comes to pop music, with the media of the early ‘00s depicting Britney Spears and Christina Aguilera especially as airheads. Imani Perry writes that “women are often presented as vacuous, doing nothing but swaying around seductively” (2004, p. 137) in music videos, but this is one stereotype that Ann Takamaki breaks. She is ditzy and bratty but has clear agency, demonstrated both through the fact she is a competent party member and through her actions and dialogue as the game progresses. END_OF_DOCUMENT_TOKEN_TO_BE_REPLACED

This month on the First Person Podcast, you join Lia Black, Giuseppe Femia, Chris Lawrence, and Sabrina Sgandurra to look at the roles they have filled. What experience are they looking for in the characters they portray? How do they… END_OF_DOCUMENT_TOKEN_TO_BE_REPLACED

This month on the First Person Podcast, we sit down with Lia Black, and Sarah Stang for Valentine’s Day to discuss their hot takes on romance in gaming. What are their video game crushes? What makes for a good romance narrative? What should we be seeing more of in our romance titles? All these questions and more will be answered on this episode of the podcast. END_OF_DOCUMENT_TOKEN_TO_BE_REPLACED

I want to emphasize that this is not a book in which the reader will find untouchable truths: rather, it is a tool that explains, in a very clear and understandable way, some of the debates and discussions that are still open around video games and their communities. Hence, I would not dare to say that this is going to be a definitive or complete book, but the beginning of future works and new publications that will take as their starting point some of the questions that Muriel and Crawford have synthesized and summarized so well in it. END_OF_DOCUMENT_TOKEN_TO_BE_REPLACED

Refusing to acknowledge the customs of the Gerudo people for the sake of entering the city certainly reads as a violation of a safe space when we only take into consideration Link’s canonical gender. However, I also firmly believe, as someone who identifies as a transgender man and has spent much of his life exploring the intricacies of identity, that there is a potential for it not to be a violation depending on how the player views and conceptualizes Link. END_OF_DOCUMENT_TOKEN_TO_BE_REPLACED 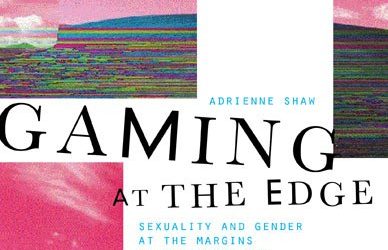 I have never identified as a ‘gamer’. I transitioned from casual to serious player in the months just prior to the drastic increase of online harassment campaigns, and the fierce attacks against diversity that characterized them. The toxic, sexist rhetoric that spread across gaming communities seems to have tainted the label of ‘gamer’ in my eyes. Of course, this movement did not go unopposed, and the calls for increased representations of diversity in video games have been numerous and vehement. An essential addition to this conversation is Adrienne Shaw’s book Gaming at the Edge: Sexuality and Gender at the Margins of Gamer Culture. Gaming at the Edge offers an ethnographic study that explores the ways members of marginalized groups engage with video games, how the ability to identify with the characters represented in games shapes this engagement, and argues that ongoing conversations about diversity in games should be reframed to account for the intersectional nature of identity. END_OF_DOCUMENT_TOKEN_TO_BE_REPLACED

Recent events have called into question just exactly what it means to be a “gamer” today. What was once a title associated with being a member of a fun loving community now seems to have become intertwined with the promotion of misogynistic and discriminatory behavior. This perceived shift in gamer culture has been spurred by a series of recent events: the influx of threats directed towards Anita Sarkeesian following her Tropes vs. Women YouTube Series, the scripted unscripted interaction presented at Microsoft’s E3 event that seemed to condone “rape culture”, and the transphobic comments by one of the hosts of the Video Game Awards, just to name a few. These incidents have called into question what it really means to be a gamer today and has led some members of the gaming community to consider the resignation of their “gamer” title. END_OF_DOCUMENT_TOKEN_TO_BE_REPLACED