Don Everhart is a sociologist who researches technoscientific communities and actions. He thinks games are good to think with and wishes more pushed against conventions of style and embodiment. You can see more of his thoughts and hear about his other writing and video projects from his twitter feed(s).

The Splatocalypse has come and gone, and Splatoon 2 remains. In the last major in-game event (that is, the last Splatfest), Team Chaos won. This event and its results, as influenced by the two competing player teams, will likely be monumental for the series. After all, from the first Splatoon to the second, the results of the final splatfest in the first game influenced the characters and plot for the single-player campaign in the second. That’s just one of many links between the players’ world and the permeable world of the Splatoon series. Transcending any one event, this is built into the style of the entire series. Splatoon has stylistic foundations in streetwear, electronica, hip-hop, and corporate punk stylings. With the persistence and growth of those styles in Splatoon, one of the medium’s most dense laminations of subcultures continues to spin in contradictions and feedback loops.

Splatoon follows a loose tradition of Japanese-made video games that remix and represent subcultural signifiers. To my eyes, it’s very reminiscent of the early 2000s, when friends and I would sketch in wild style in notebooks, partly inspired by Jet Set Radio. We were posers and toys, suburban and rural white boys taken with Hideki Naganuma’s soundtrack, the artistic stylings of Ryuta Ueda as influenced by Eric Haze and the Beastie Boys, and plot lines involving running from the cops and destroying corporate domination through a combination of aerosol and jet-powered rollerblades. Almost 20 years later, and my best friend still has a page that I did for him featuring the protagonist of the game, another skinny kid named Beat.

Suburban and privileged though we were (and now, urban and still privileged as we are), the irony of our situation wasn’t entirely lost on us. We were identifying with a vision of punk, hip-hop, and rave subcultures shot through their Japanese versions, as presented by Sega Games Co., Ltd. We also went to DIY shows and worked shitty teenage jobs for minimum wage. Some of those wages would go back into used bins of video games, or, for those with Dreamcasts, into CD-Rs to facilitate blissfully easy piracy. I think most of my friends had an actual copy, but the games and consoles were passed around, sold back to used stores and pawn shops that were later revisited to pick everything back up. We didn’t agonize much over it, but we would talk about whether it was bullshit to adapt letters or styles from the art in the game. And we would snicker at the warning that the game displayed on startup, with Beat rendered in white line-art behind a bright red “X”, that read: 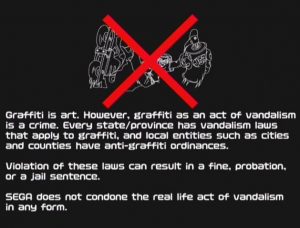 Graffiti is art. However, graffiti as an act of vandalism is a crime. Every state/province has vandalism laws that apply to graffiti, and local entities such as cities and counties have anti-graffiti ordinances.

Violation of these laws can result in a fine, probation, or a jail sentence.

SEGA does not condone the real life act of vandalism in any form.

How punk could it be to enjoy its commodified form? What were me and my friends even doing, remixing and appropriating bits of a video game? Maybe we were like the animated characters of Jet Set Radio, somewhat stiltedly but gamely executing choreography. As Burrill (2006) noted, the animations of different characters in Jet Set Radio themselves reflect different ideas of authenticity. From the largely east-asian or white coded player characters to the narration of the more African-American presenting DJ Professor K, different characters exhibit more or less fluency in movement and speech styles of the culture. DJ Professor K is the narrator of the game for a reason. His is the style that gets practiced and transformed in translation by the kids in the street. In the game and out, that style could be taken up, mixed with anything else, and repurposed as a set of signifiers. Jet Set Radio took subcultural influences and packaged them up as a product for consumption even while its story and characters spoke against it.

That cycle of subcultural packaging, sale, consumption, dissipation, and renewal is endemic to subcultural growth and transformation. This cycle is discussed by Ryan Moore (2010) and Dylan Clark (2003), particularly in reference to how punk has died again and again at the hands of mass culture, only to be continuously reborn. In part, this has to do with how easily the materials of everyday life can be made into subcultural signifiers. For punk, it could be as simple as a safety pin or as elaborate as a liberty-spiked mohawk. For hip-hop, it could be anything from an oversized shirt or a pair of limited edition sneakers. The meaning is all in how something is worn, in how it is used. It also springs from what is readily, materially available in post-industrial society.

Splatoon and Jet Set Radio share that whirlpool of signification and commodification. But while there has been enough time for nostalgia to creep in about the latter, the former is still fresh. With design that owes just as much to the booming popularity of East Asian pop groups worldwide as it does to punk and hip-hop, the Splatoon series merges together someone’s ideas of cool. That imagination is manifest in a frenetic mash-up of styles, characters, narrative frames, environments, and in- and out-of-game gear.

Splatoon, and its sequel, Splatoon 2, are set in a far future in which cephalopods have developed to live on what remains of the available dry land. Somehow, at the point where the game is set, 2010s-style streetwear fashions prevail and cephalopod-femme-fronted pop duos deliver the latest tunes and news. The faces of the game are Marina and Pearl, the two leads of Off the Hook. Speaking from a storefront space in the game’s main plaza and hub, their conversational topics usually range from developer updates to the rotating game maps of the day, all given the easy banter of bandmates and show hosts. A regular piece of dialogue between Pearl and Marina runs like this:

PEARL: A patch? THIS IS A GAME CHANGER, Y’ALL!
MARINA: Well, yeah. They literally made some changes to the game, so…

In a 2018 interview conducted with producer Hisashi Nogami, Brian Shea from GameInformer asked about the self awareness shown by Pearl and Marina (Shea 2018). His reply acknowledged not only their everyday announcements, but also hinged on Off the Hook’s performances during Splatfests. In reply to whether Pearl and Marina knew they were in a video game, Nogami referenced Matsuri, Japanese festivals that are often accompanied by some degree of ritual. Drawing a parallel between leaders of Matsuri and Pearl and Marina, Nogami playfully positioned the members of Off the Hook as existing between the world of Splatoon and more everyday human realities. He implied that this in-between state was more flexible during Splatfests, laughing that during them characters may come into contact with other consciousnesses, “speaking words that aren’t even their own.” (Shea 2018)

That idea is a familiar one when it comes to ritual and trance, whether described by a Japanese game developer or Margaret Mead. When it comes to Splatoon and Jet Set Radio, the influence of more earthly reality is obvious in the clothing that characters wear, the music they listen to, and the art they reproduce. But Splatoon, much more so than Jet Set Radio, has ways of reciprocally and directly influencing its players’ reality. One mechanism for that is through the in-game dialogue. Others transcend the game entirely, in the form of limited time team T-shirts (which, upon their release in North America, were sold out in a matter of hours) and semi-live concerts featuring holographic performances from Pearl and Marina. Splatoon’s design is made to travel, not just to be influenced but to influence.

While the Dreamcast, Jet Set Radio’s original platform, had adaptors that could be used to provide an internet connection, that game’s software didn’t easily enable it to directly reach out from its boundaries into the rest of the world. DJ Professor K couldn’t be provided with new beats or dialog with a quick download pushed to all users, and the game would be perfectly playable even for players that never went online. The distance of 15 years of synergistic corporate and technological development, as well as the widespread acceptance and enjoyment of always-online games, enables Nintendo to more thoroughly mix and blur boundaries than SEGA could. Pearl and Marina can joke away about how a map with the theme of a warehouse is devoid of workers since robots took all their jobs. As Marina said, “Welcome to the future!” 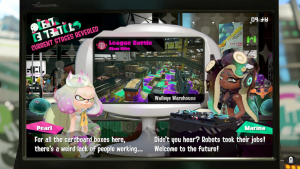 PEARL: For all the cardboard boxes here, there’s a weird lack of people working…
MARINA: Didn’t you hear? Robots took their jobs! Welcome to the future!

Jet Set Radio did, of course, reach out from its platform and into the world of my friends and myself, and Splatoon likewise inspires new art, remixes, and styles. The difference is in how directly Splatoon can connect to the world, and how much its design lends itself to reciprocity and feedback. That reciprocity even extends between games in the series, as shown in the influence of Splatoon 1’s final Splatfest on Splatoon 2. As a series, Splatoon has a sequence of events and updates that reach out from the game, and in Splatfests it has delineated moments when the game’s world becomes more easily influenced by not only its designers but its players. Throughout, bits of dialogue wink at this connection and connections to the post-industrial modernity of its target audience.

It’s also somewhat chilling that the consequences of that state of society and the world prefigure Splatoon’s setting: the Inklings inhabit a future, flooded planet, in which air-breathing society scrambles for turf control. In that, perhaps the game’s revival of our current era’s fashions is most appropriate. They are, after all, the styles of people who know that industrial society, and the shifting of industrial manufacturing to less wealthy parts of the globe, will likely lead towards fights over land and water resources. Just as Jet Set Radio presented a style and politics of teenage rebellion, maybe Splatoon, too, carries the marks of subcultural style. Perhaps the politics of those styles is submerged under a pop and corporate veneer, but you can only hide so much when the world has drowned. Then again, maybe the thing to do if it’s drowned is to throw a concert and paint some walls.