Kaeleigh Evans is a Communication undergraduate at Simon Fraser University. Emma Tarver is a Psychology undergraduate at the University of British Columbia. Emma and Kaeleigh are passionate about gender and media, as well as sex worker’s rights. They love playing zombie videogames and playing with their dogs, Rey and Fajita.

Despite being described as the world’s oldest profession, sex work occupies relatively little space in the mainstream media, with the distinct exception of video games. From the 1982 Atari title Gigolo through Leisure Suit Larry and all the Grand Theft Autos, sex worker characters have been present since the popularization of the medium itself. Although countless studies have researched violence in video games and the sexualization of women in video games, there has yet to be academic research on sex workers and video games – a topic that sits at a unique intersection of those two prevalent themes. The inseparability of violence and sex work within sex worker narratives is a relatively newer phenomenon, according to news media research (Hallgrímsdóttir et al., 2008), and researchers have found these gameplay narratives to increase Rape Myth Acceptance by various psychological studies as well (Beck et al., 2012; Gabbiadini et al., 2016; Stermer & Burkley, 2012).

We have examined eight popular console titles which feature sex worker characters in an effort to uncover common themes and narratives and to get a broad spectrum look at how sex worker characters are treated in video game media. Although the term “sex worker” covers a variety of occupations, for the purposes of this paper, we are choosing to focus specifically on full-service sex workers who appear to offer sexual services to physically present clients. This was a deliberate choice as the legality of full-service sex work is disputed in courts and public spheres around the world. Furthermore, full-service sex workers face a great deal of violence and risk due to both the legal status of sex work and the private, in-person nature of their work. Their representation in media creates a popular narrative of sex work, one that informs players’ perceptions of sex work.

The games we have examined are of various genres, gameplay styles, and feature sex worker characters in a variety of ways; they are all popular and widely available titles released in the last10 years. Some titles, such as The Wolf Among Us, feature sex workers as an important part of the main story, while others less so – for example, Bioshock only features a sex worker’s corpse and her audio diary to be briefly considered or ignored. The eight games that we looked at were Bioshock, Fable 3, Grand Theft Auto V, Heavy Rain, Red Dead Redemption, Saint’s Row 3, The Witcher 3, and The Wolf Among Us. 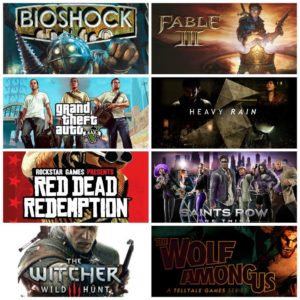 We conducted the process of examining video game content in two major ways. The first, and the most prominent method, was playing the video games in question.  This allowed us to experiment with what options are available for the player in terms of interacting with the sex worker characters, as well as allowing  us to experience these interactions first hand as the playable character.

The second was utilizing official websites and Wiki pages. Sometimes it was necessary to look at these sources to determine that there were no alternate possibilities that we did not experience in our own play-through. It was also important for us to know if there were differences or additional notable sex worker characters and interactions in DLC packs that we may not have had access to. We developed a set of questions (fig. 1) that sought to uncover various facets of sex worker representation and answered each question from a combination of game play and official online information. The questions fit into three basic categories: Descriptors, Interaction, and Violence.

We found that language was often used as a tool to define the protagonist’s personality and set him apart from other characters. While many characters used derogatory language to refer to sex workers (“hos”, “bitches”, “the pussy”), in most instances the playable characters did not use this language. The playable characters were often “gentlemanly” types, and while others around them were calling sex workers “hookers,” these player-characters were simply referring to them as “the women” or “working girls”.

The setting where sex workers are visible in these games is another aspect of the descriptors. As often noted by others, and certainly holding true in our experience, sex workers are often peppered into a landscape to show players that they are in a low-class, poor area of town. This was particularly true in open world games that featured street-working sex workers (Fable 3, Grand Theft Auto V, Saint’s Row 3). In the remaining games, notably in Fable 3, players encounter sex workers primarily in brothels instead of on the street. Regardless of where they work, however, the key theme we observed was that the sex workers are only seen by the players where they work and cannot leave those prescribed areas, which enforces the idea that their work is their primary characteristic.

In examining our data from the last category, violence, we found that an astonishing 100% of the games we surveyed included sex workers in violent situations. Interestingly, the only game where a sex worker is in a violent situation but is not the target of violence herself is in Grand Theft Auto V, which is perhaps the game with the worst reputation for sex worker violence. You could play the entire game and all side missions without witnessing violence directed at a sex worker, should you wish.

Violence was the most prevalent theme we found throughout our research. At no point were sex workers depicted in safe environments, regardless of whether the sex worker was a more fully fleshed out character with a name (The Wolf Among Us or Heavy Rain) or simply used as background decoration (Red Dead Redemption, Saint’s Row 3, GTA V).  It is important to acknowledge that all of the games featured have themes of generalized violence, even when it is primarily centred around a sex worker, such as The Wolf Among Us. Without discounting that we chose primarily violent games, it is still significant that sex workers are consistently linked to violence, and never portrayed without it. This has come to be an expected part of many video games; this was evident while we searched popular game forums, finding various posts which request assistance with killing sex worker characters. One forum posting about the crime game Sleeping Dogs, titled “Will there be hookers in the game and can you kill them?” spoke to the commonplace nature of violence against sex workers in video games. (The answers in this case are “yes” and “no” respectively).

Sex workers as background decoration, used to set a lower-class or industrial area’s tone, was another prevalent theme. Sex workers in nearly all of the games (The Wolf Among Us being the exception) could only be found in certain industrial or lower-class areas –  sometimes only within the confines of their brothels, never to be seen outside these specific circumstances. Another way in which sex workers were used as props to set the tone, however, was to allow the protagonist to appear gentlemanly.

Using the poor treatment against sex worker characters (including disrespectful language as well as physical harm and violence) in order to establish the “good guy” nature of the playable protagonist does nothing to destigmatize sex workers. These same harmful images are still being reproduced and legitimized, even if by characters other than the protagonist. 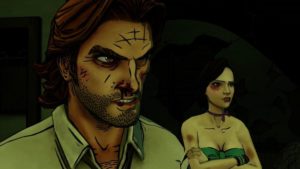 The Wolf Among Us features playable male character (Bigby) coming to the aid of a battered female sex worker (Faith).

The overwhelming prevalence of these themes of violence could come from the fact that sex workers are not a part of the storytelling process, in the way Stuart Hall (2001) describes the “other”. Stuart Hall’s (2001) notion of the other relates to the representation of sex workers in a similar way as he discusses the theory regarding race. When sex workers are not writing the narratives themselves, the experience of a sex worker is utilized as a narrative tool to contrast sex workers from the rest of the population and defining them as an “other”. They are differentiated from other women who do not come under constant violence and disrespect at the hands of other male characters in the game. They are also posited as an “other” with contrast to the playable character in the way that they have no control or agency over their situations, whereas a playable character, by nature of the medium, has the utmost control. The playable character can either enact violence against a sex worker character or try to save her from violent situations (the notable exception being Bioshock where the playable character can at only, at most, listen to her story), but the sex workers themselves are not depicted as active agents in these processes.

Another important theme throughout this research was the way in which sex workers and protagonists were gendered. The overwhelming majority of sex worker characters are female, whereas most of the playable characters in the games were male. These findings are particularly important when related with the psychological studies (Beck et al., 2012; Gabbiadini et al., 2016; Stermer & Burkley, 2012) which provide evidence for the theory that male players are more impacted by the violence against and sexualization of female characters in video games. Since there is evidence for a lack of empathy towards female victims (Gabbiadini et al., 2016) and higher Rape Myth Acceptance for male players (Beck et al., 2012; Stermer & Burkley, 2012), due in part to identification with the masculine aspects of the protagonists (Gabbiadini et al., 2016) the gendered relationship shown to be very prevalent is important here. Additionally, this commonly gendered relationship in video games does not accurately reflect the diversity of the sex worker population in terms of gender, with only one game (Fable 3) featuring a male sex worker and all games presumably featuring only cisgender sex workers.

Based on our research, we believe that the real world violence and stigma that affects sex workers is upheld and promoted in video games. Culturally, we are in a time where calls for diversity are frequent, and fans are increasingly holding creators to a higher standard of representations of women in media. The purpose of our research is to begin a conversation about how sex workers are currently being portrayed, and to encourage both fans and creators to consider the stereotypes that they hold and to strive toward more diverse representations of sex workers in video games.

Screen_TheWolfAmongUs_104_Gibbstown_1951 [Characters from Telltale’s The Wolf Among us, Bigby and Nerissa, sit in chairs facing each other. Nerissa hangs her head, not looking at Bigby, while she holds his hand.]. (2014, May 28). Retrieved from http://nerdist.com/game-review-the-wolf-among-us-episode-4-in-sheeps-clothing/

The wolf among us [Computer software]. (2014). San Rafael: Telltale Games.