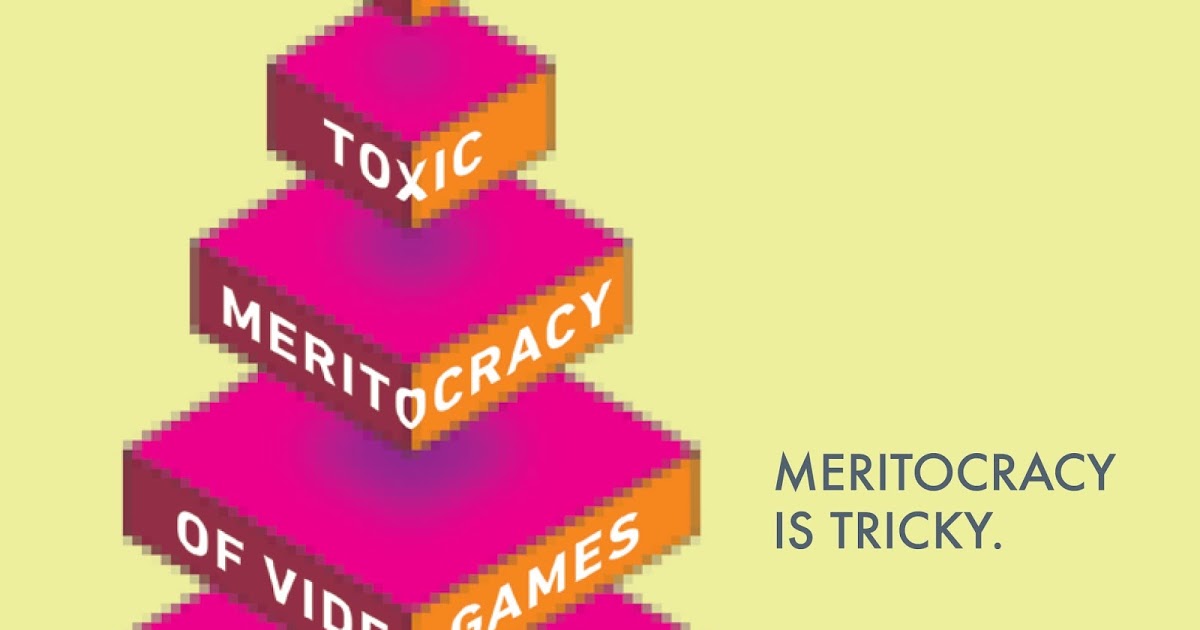 Christopher A. Paul is an Associate Professor and Chair of the Communication Department at Seattle University. He is the author of The Toxic Meritocracy of Video Games: Why Gaming Culture Is the Worst and Wordplay and the Discourse of Video Games: Analyzing Words, Design, and Play.

When I wrote my new book, The Toxic Meritocracy of Video Games: Why Gaming Culture Is the Worst, I knew that I would be poking at a soft spot and would get a response. The title alone is designed to provoke and the content within it encourages readers to consider a variety of issues related to game culture, meritocracy, and structural privilege. All of these things get a reaction from people, but the primary argument I want to advance in this essay is the need for all of us to reflect on game culture, game studies, and on how the choices we make reproduce the defensiveness that is so readily seen in discussions around video games.

There are two key threads in the book that need to be established to make my case here. First, I believe video games have a real issue with toxicity. This is not a particularly hard case to make, with GamerGate punctuating the discourse and Riot Games and Blizzard openly discussing the steps they are taking to battle toxicity, even as blockbuster investigative reporting details the sexist, toxic work environment at Riot Games. However, the dominant approach in the game industry to fix these issues is technical, with bans and mutes and a variety of other technical interventions deployed in an attempt to make interactions more tolerable. The problem with this approach is that the issues are cultural and exacerbated by game design, which requires rethinking the design and narrative mechanics in video games.

This gets to the second part of the book that is instructive for this essay: the deep integration of meritocratic tenets into games. I believe video games are now an actualized meritocracy, where players are consistently exposed to design and narrative features that are predicated on celebrating a combination of skill and hard work. Although meritocracy may seem both timeless and good, it’s actually a relatively recent phenomenon that dates to the 1950s. The author, Michael Young, who popularized the term did so in a critique, intending for us to reject it largely because it ignored structural factors. As merit was more widely celebrated by technocrats, Young wrote about how he believed we were on the wrong path, one that only seemed right because it celebrates those of us at the top, teaching us to think about how we earned it, rather than consider the advantages and lucky breaks that helped us get to where we are. Research on merit and the benefits of structural advantages have shown the ideology turns people into jerks, systematically ignores issues of privilege, and that it has so infiltrated the way that we think that meritocratic cues prompt us to defend the status quo.

I believe all of the issues with meritocracy are even more complicated in video games for two reasons. First, video games are meritocracy actualized. They are a place where abstract notions become concrete. The design and narrative of games focus on the inevitable rise from the bottom to the top, just as long as the player works hard enough and is talented enough. Levels ensure steady progress and ensure a clear demarcation of relative social status. Video games that are seen as proper, or real, tend to focus on talent and skill; they are more like Forza than Mario Kart. The reliance on meritocratic beliefs is so tightly integrated into games that those with substantial elements of luck, like shot percentages in XCOM, lie to the player, understating their chance at success so players don’t rage too hard when they are unlucky. Second, the computers that were the golden combination with rule systems to make video games happen become a problem as our humanity is boiled off and judgements are made that seem certain and absolute. Context and humanity disappear as video games inherit all the problems of online communication and add in a presumption that a computer-based arbiter is fair, accurate, and unbiased. These dynamics short-circuit reflection and help fuel a cycle of outrage.

One way to intervene and to open up space to reflect is to briefly explain an advertising campaign I ran for my book on Facebook. In the targeting I initially included gamers, but the comments were so overwhelmingly negative I ran a new ad that focused on game developers. The comments were still overwhelmingly negative, but the most striking element to me is how clearly they demonstrate a lack of interest in reflecting on games and how they work. Part of that was likely framed by a deliberately trolly phrase as part of the ad, “Gaming culture sucks. But it doesn’t have to,” but there was a clear thread of resistance to any sort of change or willingness to imagine how things could be different or what advantages change could offer. People responded with comments encouraging me to crawl back into the hole I came out of, encouraged me to ‘git gud,’ called me a bitch and a bearded lesbian, combined the sentiments with a “sounds like someone needs to ‘l2p lil’ bitch,’” encouraged me to get a vasectomy and to “KYS,” and talked plenty about my mother and the choices they believe she should have made. Although my partner was surprised and disturbed by the tenor of the discussion, I kind of found this par for the course.

What was more interesting to me is the handful of debates that popped up in the comments. On the one hand, several people made the argument that “Gamers don’t care if you’re female, gay, black, or whatever. It’s thee [sic] most inclusive community. Thusly, it behaves the way it behaves. Supremacy wins.” And, “I have to disagree with this as a gamer…If anything, gaming is a true meritocracy. Guy or girl, it doesn’t matter. What truly matters is the skill st [sic] whatever game you’re playing.” I find this kind of thread representative of a willful blindness to what the community in games is actually like and clearly represents a lack of interest in introspection about how the community around games works. It is the way it is and that is how it should be. In a similar line of reasoning, one comment argued that the “Gaming industry will be less sexist when women become more prevalent on the market…just like beauty magazines will be more men oriented when men become more prevalent on the market as well.” This is a fascinating bit of disassembling that makes a really odd analogy, while neglecting that the magazine market as a whole runs the gamut of levels of focus, while the community around games routinely puts impediments in front of those who are not white and male.

A couple of people posted in defense of my argument, contending that meritocracy is a problem and that it is an appropriate thing to critique or that the community around games really is dismissive of the concerns of people who are not white men. At the same time, it was notable to me that the first post of one of the most ardent defenders of my critiques of meritocracy and game culture began by stating “ITT: Butthurt gamer brox who can’t acknowledge that their ‘culture’ is hugely abusive towards women, ethnic minorities, and disabled people. We all play the same games, folks, it’s time to stop being habitual cunts.” Although there was plenty of withering criticism and tons of insults aimed at me, very little of the discourse was constructive or positive. In and of itself, the topic was triggering to people and the channel of communication was ill suited to actually engaging in deliberative discourse. This lack of a willingness to explore something new may also tie into why it is so hard to launch a new game and why the mainstream game industry is so reliant on sequels and franchises. We are looking for more of the same, more comfort, rather than introspection and possible change.

The immediate rejection was particularly interesting in light of the presumption that one has to play a video game and play it well in order to review it. The same courtesy is not extended to other forms of media, at least not to my book, where plenty of people were all too ready to dismiss it based on a title or on marketing copy summarizing the book that I did not even write. Many people felt quite free to drop a 1-star Amazon review within moments of the book’s release, leading to some deep questions about whether or not they had actually read it. This also points to how the community surrounding video games thinks of itself as exceptional and different, with the belief that they should be held to special standards of appreciation and richness. What does the focus on virtuoso performances say about video games? Does a book reviewer have to talk through how they read through a book as part of a review? Does anyone turn to a friend and celebrate how they just watched the heck out of a movie?

I am clearly getting less criticism than many of my colleagues because I am a straight white male. I also happen to work at a university where being a social justice warrior is something I can list as a positive in my annual reviews, but there are threads in the critiques that I think indicate a deeper need to reflect about games, how they work, and what we want from them. Those of us involved with video games may not be properly questioning our assumptions about how games can work. We may be treating values as immutable facts. And we are likely lacking historical awareness of how things have been done differently before and could be done differently again.

And this is the space where I think it is relevant to turn the analytical focus back onto academia and game studies. I think it is all too easy for me to look at the comments I have gotten and fail to look more deeply at what they say. It is easy to call for reflection in the industry because that asks very little of me. However, the more I think about how game studies works I am curious about how reflective we are being about our choices and actions. I certainly hope we are far less toxic to each other than game culture at large, but are we internalizing values about what is worth studying and what isn’t as facts of our own? Are we gatekeeping the kinds of papers and ideas that could drive us to think differently about games and how they work? Have we internalized the marginalization we have all likely feel when we tell a colleague we study games and they laugh our area of research off as trivial?

The first class of almost every game studies professor I know was designed to be difficult, generally overly so, as they thought to themselves “you think this game class is going to be easy, I’ll show you!” Anyone who has been studying games has likely run into someone who thinks what they do is a joke and many of us have overcompensated by publishing more and pushing harder. Those slights have a cost and for game culture, fueled by a maniacal focus on meritocracy, that cost is an incredible amount of toxicity. I find game studies to be an incredibly welcoming space, but I also think that as our field changes, adapts, and splinters it may be time to do some reflecting and accounting for the beliefs we hold and the values we may be treating as facts.