Jeremy is a second-year graduate student in the English program at Marshall University with interests in poststructuralist, feminist, and queer scholarship. In his spare time (as if that exists), he writes songs, goes for long hikes, and spends countless hours in bookstores.

The day I blew out my fourth candle is the same day that I would encounter Harvest Moon for the first time. After my birthday party, my mom and dad took me to Ames in Beckley, West Virginia, to choose a gift for my birthday. My mom, an avid gamer herself, took me to the video game section and suggested that I should purchase a SNES or Sega Genesis game. There, as if a single spotlight cut through the bleak darkness of seemingly infinite possibilities while a Greek chorus provided the score, my attention was drawn to the red barn, haystacks, judgmental horse with the side-eye, winky bunny (not the kind that Hugh Hefner kept around), and the bowlegged farmer on the box of a game I would not learn the name of until I was a teenager. 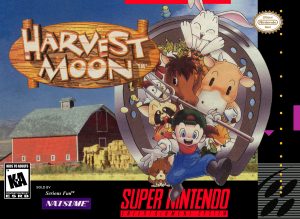 I had made my decision; this was the game for me. However, my mom flatly said, “You won’t enjoy that game because its about farming, which we already do at home.” I was dejected; the Greek chorus’ song playing in my mind was reduced to an unsettling sequence of diminished chords. On MY birthday, I was coerced into getting Speedy Gonzales: Los Gatos Banditos because we didn’t have Hispanic mice with sombreros where I come from.

Still, in a lot of ways, I think that this was fate’s way of answering an unspoken prayer for a game that felt tailor-made for me, though it would be years before I would finally immerse myself in the simulated farming of Harvest Moon. As if history tried to correct itself, the day I blew out my eleventh candle, I visited GameStop and walked home with the GameCube title Harvest Moon: A Wonderful Life, this time with no pushback. At the time, I did not realize that this was the sequel to the game that got away, and I only learned of this after dedicating more time than I would like to admit researching and reading fanfic of Harvest Moon in my free time. I found comfort in living out a life that reminded me of my own, but that offered me the chance to meet new people—a relatively unique experience when living miles away from any real-world neighbors in the heart of Appalachia. I was also able to act out a life that I thought I wanted to live someday. I got to fish, farm, milk cows, get married to a sweet woman who seemed to adore me, have kids, and see my legacy unfold in A Wonderful Life.

A few months later, in the fall of 2004, I delivered a presentation to my classmates on why I thought that everyone should play A Wonderful Life and even wrote a short-story inspired by my virtual farm for my English class called “Sunnybrook Love” (it was as cheesy as it sounds). To say that Harvest Moon was a significant part of my youth is not an understatement. I even forewent getting a birthday present on my twelfth birthday so that my parents would preorder the “girl version” of A Wonderful Life, which was called Another Wonderful Life, and released in July of 2005.

I didn’t frequently play as girl characters in games because, even at a young age, I identified as cisgender and wanted my video game avatar to reflect me. However, playing as the female avatar, I developed what I can retroactively label as a crush for my first video game husband, Gustafa. Like me, my video game husband had a love of nature, flowers, and music, and I think I was seduced when I saw him playing his guitar. Something about the hippy lifestyle, yurt included, attracted me, but I remember feeling strange when Gustafa told me that he was searching for a place to write a song for a girl that he loved. I knew that the hands controlling the avatar were male hands—that Gustafa’s song would never be for ME—and that an irreconcilable gap existed between the female avatar and me. I may not have known it at the time, but this is the first of many experiences that would lead me to identify as bisexual.

In the Japanese version of the game, in addition to a number of bachelors, a “best friend” system was added that allowed players to enter into domestic (read lesbian) partnerships with the Harvest Goddess, Witch Princess, Leia, and Keria. For the first time in the series, players, in control of a female avatar, were allowed to pursue non-heteronormative relationships that, based on the player’s decisions, could culminate in a scene similar to the heteronormative marriage sequences, but with the notable absence of other villagers other than the mayor who officiates the ceremony. The couple could later receive a child from the Harvest Lord. This feature was removed from the North American copy of this game, and no official reason was ever provided for its removal. Thus, the exclusion of this feature was viewed by many, including myself, as an attempt to promote only heteronormative modes of behavior for the player’s avatar and for the player behind the controller, a recurring theme that has plagued every Harvest Moon/Story of Seasons game that has been released in America.

In 2012, however, with the release of Harvest Moon: A New Beginning, players were afforded the opportunity for the first time to customize their character’s appearance in ways that defy stereotypical gender roles. For example, though players are forced to choose their sex at the beginning of the game (thankfully, they didn’t have to purchase individual versions of the game), they can gender bend their character to the point where players can create ostensibly queer relationships. However, other characters continuously refer to the player with the pronouns that have been historically linked to their biological sex, which breaks the illusion of queer content.

Though homosexual relationships have never been an option in any game in the series other than Korobokkuru Sutēshon for Gāru, more recent games in the series have included NPCs that are coded as queer figures, though even this has been problematic. For example, in the 2010 game Harvest Moon: The Tale of Two Towns, LGBT Video Game Archive blogger Adrienne Shaw writes that Harold, one of the non-romanceable villagers, is “coded as implicitly gay” with his stereotypically effeminate behavior, his pink room, and his love of flowers, perfume, and makeup (“Howard in Harvest Moon”). Though it may not have been the producers’ intentions, Harold’s flamboyant actions do not seem authentic and, in fact, seem deliberately exaggerated for comedic effect rather than authentic representation.

A slightly more nuanced attempt at queer inclusivity can be seen in the 2014 release Story of Seasons (SoS). According to the official website, Marian is one of the “most colorful” characters the player will meet in SoS, and the writers utilize the pronoun “he” to refer to this character (“Townspeople: Marian”). However, Marian’s gender is a source of confusion for the player because the other villagers and creators use the masculine pronouns “he” and “him” to refer to Marian, but Marian is coded as feminine and refer to their self as a “big sister” in conversation with the player.

The use of “sister” is noteworthy because of its use as slang in gay communities, and players learn that Marian has a boyfriend, which could support labeling Marian as “gay”; however, labeling this as a gay relationship is problematic in consideration of Marian’s undefined gender identity. Other characters are shown to speculate on Marian’s gender nonconformity, but the player, too, is left in the dark and left to speculate. This lack of an explicit gender or sexual identity is significant because the game effectively criticizes binary methods of understanding gender, which aligns with recent trends in academic conceptualizations of what encompasses being “queer.” This illustrates that the Harvest Moon series is capable of including content that features nuanced representation of queer groups, but the series has not afforded the same opportunity to the player’s avatar, preventing players from feeling that their character accurately represents who they are.

Fortunately, the 2016 game Stardew Valley began to rewrite the script of predominant heteronormativity in farming games. For example, though the player must still choose their character’s sex, they can change their appearance to look as masculine or feminine as they please, and they can romance any of the six bachelors or six bachelorettes. Though one can argue that Stardew Valley is a bisexual wonderland that affirms arguments of universal bisexuality, the ability for gay and lesbian individuals to establish relationships that reflect who they are in reality is a step in the right direction for positive representation of queer groups in farming games; however, in the future, games should incorporate a variety of characters with individual sexual identities and gender identities to better reflect reality and positively represent more groups. One other feature that could be added is the option for players to choose the pronouns other characters will use when they interact so that trans* individuals are better represented in these games.

Still, in a lot of ways, my two playthroughs of Stardew Valley accurately reflect who I am as a person. I chose to play as a male character both times, but the first time I married the school teacher Penny because she reminded me of Jane from Disney’s Tarzan and Princess Daisy from the Mario series (what a knockout combo!). The second time, though, I found myself invested in the doctor, who I refer to as “Hunky Harvey,” with his delightfully delicious porn ‘stache. I knew that it was meant to be when he took me for a hot air balloon ride, despite his fear of heights, and now I feel like no one in the real world can compete. 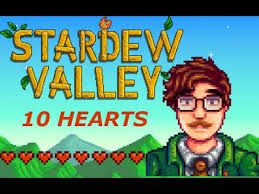 Who wouldn’t fall in love with this guy after this?!?

I think back to when I was eleven and really coming into my identity, and I wonder how the way that I viewed myself then may have been different if I had more options to explore bisexuality in the video games that I played. Would I have chosen country sweetheart Celia or the delicious yurt life with Gustafa in Harvest Moon: A Wonderful Life? I cannot say for certain, but I would have had the ability to go on dates with both characters and have gotten to know them to make that decision. I would have also felt like my desire was not implicitly coded as “deviant” or “abnormal”—that I was going against societal scripts in forming attraction to members of the same sex. Thankfully, the young kids who receive Stardew Valley when they blow out their birthday candles will have options that I never had when I was a kid. Though we have miles left to go for truly positive representation of all groups, it’s nice to know that the seeds of positive queer representation are continuing to grow into something wonderful.