Aimee is the deputy editor of Gayming Magazine and a freelance writer. She spends most of her time trying to tell people that Sonic the Hedgehog deserves human teeth, actually.

When I was a child, I read about the tale of the Pied Piper with both fear and excitement in my heart. There was something joyful about being whisked away into a magical world where responsibility and family ties were shattered husks of a concept, where I could be free and laugh, and be merry.

More importantly, the role the rats played and their relationship to the Piper also left a feeling of intrigue. There was something fascinating about being the master of a symbol that, at least in Christian texts, is considered to be associated with the Devil. Ironic, considering the Inquisition is the main villain in A Plague Tale. Led by the Grand Inquisitor, a conduit of raw, unchecked power, he uses religion, and eventually the rats themselves, to dictate his oppressive views.

It was as I grew older, and was introduced to the internet and all its splendors, that I realized how dark the tale of the Pied Piper actually could be. Thanks to blog posts, as well as conspiracy theories, there was a lot to unpack: the Pied Piper was a paedophile that used his power to lure children away, or as mentioned before, the Devil that had decided to come collect his due from humanity. After all, while God loved and worshipped his creations, the Devil saw them as resources. Which is exactly why, for the Grand Inquisitor at least, the use of the plague as a weapon in order to get what he wanted was a perfect way to dictate his control over the masses.

Yet, regardless of the dark influences that were so prominent within each tale, one thing remained the same: the use of power dynamics between adults and adolescents.

In A Plague Tale, I played as children battling against the adult world that is shown again and again to be less forgiving towards anything that is perceived as weak or lesser. In the first two chapters alone, the innocence of youth is depicted as an obstacle that adults manipulate, either through carnage of the world around them, or literal death. Brother and sister, and the main characters you control, Amicia and Hugo are chased through the streets, forests, and even dark, ancient castles by tyrannical religious figures who wish to reinstate control over them and lead them to their death.

With the Pied Piper having a background of being a religious symbol, which, depending on who you’d rather read about—the evil demon or the picture of Christian values—can either be perceived as positive or negative, he makes for an interesting figure. In the case of Prosper Mérimée, a French, Romantic writer in the 1800s, the Piper was a figure who was interpreted as malicious and dangerous. In his novel, Chronique Règne Charles IX, Mérimée refers to the Piper as the Devil, a popular interpretation, but what isn’t so popular is how Mérimée also brands the Piper’s victims as ‘heretics’. After reading this, it seems almost too obvious to say that the Grand Inquisitor in A Plague Tale, as well as his followers, fit this depiction. Throughout the game, they lust for the Macula, an ancient curse in Hugo and Amicia’s bloodline, which ultimately gives the Grand Inquisitor the power to control rats, and in doing so, the plague. With this power under his control, he doesn’t just become the Grand Inquisitor, but a deity in his own right, someone who is able to pick and choose who lives and who dies.

In the story of the Pied Piper, it is always a town and thus citizens of a lower status that suffer from death or loss. In A Plague Tale, I encountered many empty towns and cities where those who are considered lowerborn are the first to suffer from the plague of the Macula. While at the time the Grand Inquisitor doesn’t hold the power to control rats, it is clear that he and his Inquisitors are still using their position as authority figures in order to pick and choose which individuals will be thrown into the jaws of death in order to profit off the plague itself. Is it any surprise that the common folk are considered ripe pickings, such as they were in the Piper story? With no money, no protection and no insurance of a profitable life—their being left to suffer seems a given.

And yet, even with stories of evil and treachery when it comes to the Piper of Hamelin, there is another side. While the Grand Inquisitor represents a darker, more twisted symbol of power and authority, Hugo De Rune represents quite the opposite. While some will see the Piper and his power as the Devil, an evil entity that lures innocents away to their death, other interpretations see something entirely different: a Christ-like savior. The Piper gives them salvation, and depending on the tale, influences the children into a world where death and disease are unable to reach them. While Christ uses lectures and knowledge in order to influence his apostles, the Pied Piper uses music.

Hugo is that saviour. Someone who, after taking control of the rats due to his acceptance of his role as a conduit for the Macula, uses the rats, and the power that comes with them, in order to fight back against the Grand Inquisitor and his Inquisition. On the surface level, it’s the sort of light versus dark symbolism that used to intrigue me as a small child, writing stories about good versus evil and watching fantasy movies like Star Wars and Lord of the Rings.

But it goes deeper than that. Hugo’s life has been sheltered since the day of his birth, and so throughout the game I often had to guide him through a France that is sickened by plague and war. He doesn’t understand death in the same way as Amicia does due to his upbringing and innocence, and it is often left to Amicia to make the ‘hard choices’ throughout the game.

I could understand why Hugo was like this as someone who is also the younger sibling. It’s an easier life at first, and it became obvious that Asobos Studios wanted Hugo’s innocence and love of the world around him to still be intact as much as it could. This puts Hugo in direct opposition to the Grand Inquisitor, whose age, experience and lust for power enable him to take full control of the situation as a direct antagonist of Amicia and the rest of the children in A Plague Tale. 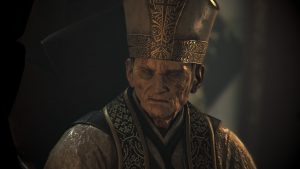 The game came at an alarming time in my life. A lot was changing and I was thrust into new things that I’d never done before as a freelance writer. It felt like stepping past the shackles of adolescenthood and becoming a full-fledged adult. Whatever one of those is.

A Plague Tale isn’t quite the same thing. I, for one, do not have to see my family butchered in front of my eyes and deal with an ancient curse that runs in my bloodline. But as a caretaker that has looked after her family since a young age, I found Amicia as the protector of her brother Hugo De Rune felt quite familiar. In the game’s case, however, it’s incredibly unsettling. Despite being a child herself, Amicia is put in a situation where her age and experience gives her more power, and thus more control, over Hugo and his desires. It’s clear that Amicia first does so out of necessity, and later love—but it is control nonetheless. If Hugo is the puppet, he only dances to his puppeteer’s tune. A warped retelling of the Piper myth.

However, as we all know, we all have to face our responsibilities in the end, especially if you have the opportunity to do something incredible. For Hugo, it was the ‘growing up’ moment that Amicia had been forced to do during the very beginning of the game by taking on the role of sister, caretaker, leader and survivor against the forces after them. But, for Hugo it was both when he finally allowed himself to take control of the rats, quite literally becoming the Pied Piper, even with a unique tune playing while doing so, and when he ends the life of one of the Grand Inquisitor’s henchmen, Nicholas. Hugo changes from having power but being ultimately passive about it, to being an active character who uses his power in order to help influence his surroundings, as well as the rats—creating both a weapon and a shield.

The act of growing up is considered to be something that comes with age, and yet Hugo’s adolescence is thrust upon him. However, it doesn’t harden him, or make him cruel. It’s what makes his connection to the world, a world that he and Amicia eventually save together, that much stronger. Hugo doesn’t use his sway over the rats to murder gleefully, nor does he use it to sway those who follow him into his thinking, but instead he tries to make the world better. There is power in being kind, after all.

Hugo holds a fair share of power due to his saviour role, not just to the world, but to the group of children and teenagers that flock to him and Amicia. If Hugo is to be compared to the Piper’s Christ-like image, then the apostles that he finds in Arthur, Rodric, Lucas, Mellie and even Amicia herself, cannot be understated. Their power, of friendship, love and respect for Hugo, is what ultimately boosts Hugo from being a small boy with sickness, to someone much greater. Someone who is loved rather than feared. What began as the player’s understanding of Amicia being the one controlling Hugo for his own good, the music to which he dances to, is flipped on its head. Hugo is the Piper, the puppeteer who does not outwardly control anyone, but is the heart that draws people into his influence. Unlike the Inquisition that opposes him, it’s Hugo’s good heart that makes people want to walk beside him, rather than cower from the power that he possesses.

Hugo’s heart and willingness to see the good in the world, and how that draws people to him, is what makes A Plague Tale such an important game to me. In a game where death, destruction and almost guaranteed end-of-the-world runs rampant, Hugo’s love and its influence on those around him is what makes me happy to play it. The world of today is terrifying and uncertain, but there is always good to be found. And that? That makes the world feel not so scary after all.