E.L. is a PhD student in the History of the Exact Sciences in Antiquity at Brown University. Her research focuses on the translation of science across time and genre, languages and cultures. When hiding out from grad school, she works in museums, writes about games, and studies the circus arts.

Games are designed and intended for a particular context. Video games are meant for screens, while board games are meant to be played until the pieces are lost. But more and more, as game designers iterate on new concepts and museum curators recognize more artifacts as worthwhile inventory, the contexts of many games are slowly shifting. But does removing a game from its intended environment impact how we interact with it? And, if so, is changing this interaction bad?

I started thinking about out-of-context games after visiting the “Learning through Play: British and French Tabletop Games from the 18th and 19th Centuries” exhibit at the John Hay Library at Brown University. This exhibit displays 23 games and related gaming material — puzzles, instruction booklets, pieces, etc. — as historical artifacts. These games all depict topics trivial and extreme in muted colors — a product of the aesthetics of their time as much as their age and curation, I expect — and a great deal of text. But what is most strikingly different about these games isn’t the different sensibilities of a different age and a different culture, but rather that these are not intended for play. They are displayed behind glass, mounted in a particular position as if in the middle of a performative match that will never be finished. The objects sit behind glass with plaques that attempt to situate them in some historical context. But this new environment effectively removes these games from their primary, interactive context. That is, you can’t play them.

So what does an interactive game become when it is treated as an objet d’art? 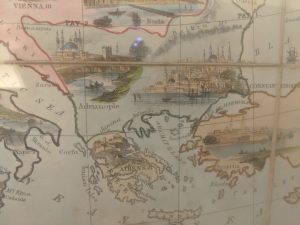 Close-up of “The Counties of England. A Geographical Game” (2nd Series, c. 1910) showing the out-dated city names “Adrianople” and “Constantinople”. Photo by author.

I wandered through the small exhibit for a while, taking in the images of games mounted to backings and staged as if they were mid-playthrough. On display are game boards designed to teach players geography, showing beautiful pastel illustrations of cities like Constantiople and Adrianople — names that like the game itself are vestiges of previous eras. Accompanying them are rule books written in meter:

“But I wish to put all on their guard

Against certain tricks I have seen;

And think not my censure too hard,

When I call them both cunning and mean.

I observe even those whom I love,

Will the Counter, or Tee-totum move,

In hope by such cheating to win.”

It’s certainly an interesting exhibit, with features that I had never seen in games before, but it left an itch un-scratched. It’s hard to walk through an exhibit on gaming without playing a single thing. 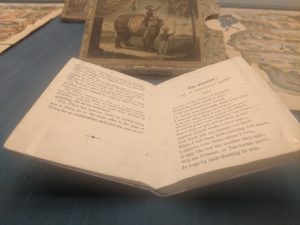 Instruction booklet accompanying “The Noble Game of the Elephant and Castle, or Travelling in Asia” (1822) that includes a poem exhorting players not to cheat. Photo by author.

Preventing typical methods of interaction actually allows us to engage with these games in new ways. I had never paid so much attention to the artwork of a game before, for instance. Many reviews of games may remark upon the art or feel, but ultimately it is style in the pursuit of gameplay. How does the aesthetic evoke something in the player? How does, in essence, the art of the object contribute to the gameplay? But at the John Hay library, visitors are asked to usurp this balance and think of games first and foremost as visual objects. Displayed in their glass houses, these board games are not available to play. Interpretations of rules can only contribute to a visual exploration of the game and not a full, immersive experience.

But does this detract from the experience? Are games-as-art or games-as-object less enjoyable than a more fully realized interactive experience? I think that the experience changes but it doesn’t preclude interaction. Guests are still invited to interact with these objects, just with their eyes and no longer with their hands. And this is enough to provide entertainment and new information, even if it can’t fully scratch that itch to actually play.

For instance, the exhibit includes an ivory teetotum from “The Royal Game of British Sovereigns.” I’m not sure that I had ever seen a teetotum before — it looks like a top, a small ivory piece meant to spin on its head, but with numbers painted around its side such that a different number shows depending on how the top falls. Ostensibly, it’s a die, but specifically it’s a die designed for an environment where dice are equated with gambling, which was “unsuitable for genteel homes.” I learned all of this from the plaque associated with the object, but would otherwise never have thought about why this teetotum was used instead of a die and what it might indicate about the culture of the time. Because this object is displayed I am therefore unable to personally interact with the teetotum, but I gain more information. In a sense, taking games and their pieces out of the original interactable contexts prevents gathering tactile understanding but allows for a new type of knowledge acquisition. 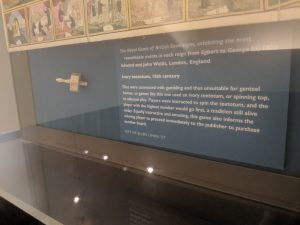 Ivory teetotum from “The Royal Game of British Sovereigns” (1820). Photo by author.

It is probably also important to consider the reach and availability of these games. Multiple printings of some games are on display, suggesting that they were widely popular, but these outdated games likely grace few collections these days. Displaying games in a museum exhibit may allow more people to interact with these objects in a way that would never happen if they stayed in personal gaming collections, and it ensures that they remain in a decent condition. But is that the point of a game? To stay pristine but unplayed?

Other examples of changing the contexts of games are perhaps more prevalent — or at least more familiar. Bar arcades offer customers the chance to relive the arcade machines that populate their ‘80s and ‘90s memories. I wasn’t alive during the early ‘80s, so my most common experience with arcade games is tucked away into alcoves at movie theaters. Imagine my surprise, then, to walk into one of these bars and see row after row after row of brightly colored box cabinets, all featuring games I’ve heard of or read about but never touched.

These bars offer a surreal experience — while they primarily seem intent on appealing to a nostalgic generation that played these games as kids, people born in 1998 are now able to drink but grew up after home consoles were widely available, not arcade cabinets. Which means that this sight is new.

Interior of the Free Play Bar Arcade in Providence, RI, one of many bar arcades that have popped up around the nation. Photo from Facebook.

But even for an intentional, nostalgic audience, these bars still shift the context of arcade games. When they were produced, they cost money to play — 25 or 50 cents bought you an opportunity to interact with the cabinet, sure, but also to demonstrate skill and leave the lasting legacy of your initials in the “Top Score” screen. At arcade bars, the games are free. You don’t have to metre out your paycheck on plays, choosing your games carefully. No longer do you leave a quarter to claim next in line. In this new free-to-play context, what does a high score mean?

Which is not an argument against free-to-play bar arcades — it takes as much skill to play Teenage Mutant Ninja Turtles now as it ever did, and achievements made without paying dues are no less valid. But it does suggest to me that these games are placed in a new context now. Not only is visitorship guarded by age, but the ways in which the 21+-year-olds interact with these machines is necessarily different.

I expected there to be rules about how long you could occupy a single machine, decisions made after incidents of game-hogging and alcohol-consumption led to their obvious end. But to my surprise I was met with a strangely congenial environment — not only were there no rules about how long I could play Jurassic Park 3, but strangers would cheer me on. One even returned my cell phone to me after I left it in a driving simulation game.

Removing the burden of payment and selecting a particular audience changes the context of these games. But it’s a shift in context that both increases interactivity by removing monetization and decreases it by allowing only those over the age of 21 to play. This is a wholly different context than the one these arcade games were designed for, and I think it certainly impacts how visitors are able to interact with them. But ultimately I don’t think it changes the enjoyment we can derive from play.

Let me pose one other instance of context-shifting in games. The Klaxo Radio Hour, from Martzi Campos and Jesse Vigil, with programming by Sean Bouchard Bloom at the USC Game Innovation Lab in 2018, invites the player into an interactive fiction of murder mystery and demonic haunting. Klaxo began its life as a physical object, a real and actual 1940’s-style radio that players could touch to interact with. Now, it’s a downloadable video game. What’s interesting to me is that this video game primarily displays on my desktop computer a radio. The story is told orally, and the content is meant to be consumed aurally. It is, in essence, a video game that invites the player not to video, “to see.” The first time I played through, I spent my time both listening to the story and providing input when prompted, but also coloring a picture of an entirely unrelated octopus. It was an ultimately freeing experience, actually, allowing me to focus both on the story and on an entirely different experience, separating audio and visual input. 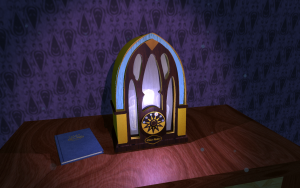 But a video game that creates a beautiful visual and then allows the player to ignore it? I think this invites us to consider a new context for the game — the video game as object, as radio on a monitor, and the video game as auditory and not visual input. This still allows players to interact with objects but in nontraditional ways. In fact here the game is an object. Klaxo’s mere existence is an exercise in shifting context, but is ultimately a wonderful game to interact with (again and again and again). In this case, then, changing the context aids in interactivity.

Many gaming contexts seem intuitive — tabletop games played on a table, arcade games played in an arcade, and video games played on a screen. But these contexts go deeper than initial intuition can provide, and examining everything from allowed audience and cost to historical situations contributes to the environment in which these games are played. But it’s 2019, and designers, owners, and curators are asking us to re-examine the role that context plays in how we interact with these games. As our history with games and gaming — and knowledge of this history — deepens, I suspect that we will more and more be asked to recontextualize aspects of play and to interact with objects in new and unusual ways.