Games are beautiful, because in the case of games, someone or something gave rise to the creation, and someone or something must play. If it appears I am inadequately utilizing the language typically reserved for passion, desire, love, and flowers, it may be because gaming–it’s interaction and play–is being underestimated. For those working in the field of new media studies and art, most of us do this work because we believe that technology can provide radical possibilities of community and creativity. I believe digital games can provide these radical possibilities. I believe this about gaming, even though I am not a gamer. 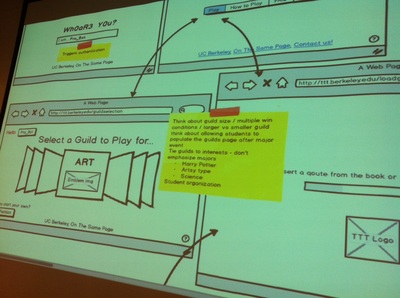 I am not a gamer, but I have created a game. My effusive enthusiasm for games may have spawned from the experience, and of course, learning from actual gaming colleagues like Amanda Phillips, Bonnie Rueberg, Noel Mariano, and Chris Goetz. I am not a gamer, but in 2013, new media artist and professor Greg Neimeyer asked me to help create a digital game based on historian George Dyson’s Turing Cathedral: The Origins of the Digital Universe. The game would be created for UC Berkeley’s “On the Same Page,” a program that selects a book for collective reading for incoming students and the larger campus. That year, we were reading Turing’s Cathedral. Specifically, the game would focus on Alan Turing’s The Turing Test. I am not a gamer, but I said yes, because I love Alan Turing, and I love reading. I was intrigued by what the experience would be like to create a digital game based on Turing’s work. Moreover, I was curious to learn how digital gaming can facilitate reading, and push open discussions on gender.

At the time, I was in my last year of my Ph.D. at UC Berkeley, and a summer of digital game making seemed like a wonderful reprieve from, and simultaneously, an engagement with my research. I was already deeply researching the history of computing, and Turing’s theoretical work. I was excited about what I would learn about Turing from creating the game. Prior to making the game, I co-conceptualized a digital storytelling educational program From the Center, which implemented HIV/AIDS digital storytelling education in the San Francisco Jail. I believe in constructionist learning–learning through creating, and that learning is multiple and fluid. Although, our priority, as educational digital gamemakers, included fostering student engagement with the book, and Turing’s Test, we believed that by playing and creating, they would also learn about the campus, and most importantly, we hoped they would learn about themselves. From my experience, I also understood that as creators of the game, we would also learn tremendously.

With Greg’s guidance, I joined a team of UC Berkeley student humanists, artists, and developers to help create the game. I served as Lead Concept and project manager. Our game, titled The Turing Test Tournament, provided an interactive engagement with the strange and fascinating history of the digital electronic computer. Launched in August 2013, the Turing Test Tournament was the UC Berkeley chat-based version of Alan Turing’s famous game for machine intelligence. Playing with the game challenged players to actually guess whether the other chat player was a bot or not. Players tried to figure out human from machine through chat-based competition and determine how convincingly a role is performed. Fostering interaction and performance, thousands of Berkeley students, faculty, and staff were able to engage with the Turing Test Tournament in an online contest. While created for the incoming class of 2013, anyone with an @berkeley.edu email address could play the Turing Test Tournament. We also organized chatscript hackathons, and for the game playing, a cash prize of $1,000 went to a winner, who then chose a UC Berkeley organization. The first winner was a student named Brianna Grado-White who chose the organization The Society of Women in Science. That was incredibly thrilling for me in the best feminist STS (science and technology studies) sense.

Through creating the Turing Test Tournament, I intimately experienced how game making is world making. I learned how magical the mechanics of game making and playing could be. I learned so much from my co-creators working in tech development and the artists as they transformed our concept into digital reality. Although we were able to launch the beta version, unfortunately we were not able to implement our conceptualization of gender, which would take the Turing Test out of the binary dimension, and into a triptych digital canvas. Who said cyborgs and transgender people can’t have babies, pets, or chats? To help demonstrate this thread of gender I’m trying to pull through this talk, let’s return to the original: Turing’s Imitation Game. 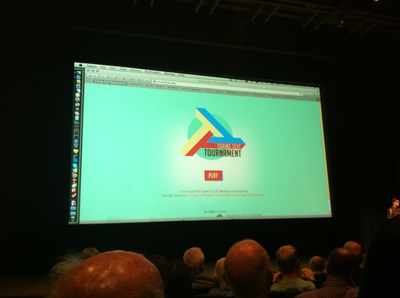 The Original Game, The Imitation Game

As recent cultural productions such as the film The Imitation Game demonstrates, a return to computer scientist Alan Turing is in order. Turing is best known for his work helping to break the German Enigma codes during World War II and his formative theorization of the contemporary digital computer. Specifically, his influential and provocative 1950 essay “Computing Machinery and Intelligence,” which was published in the journal Mind, posits artificial intelligence and a universal machine. As computer historians such as Dyson and others have observed, Turing’s vision of the universal computer and artificial intelligence i was formative to the conceptualization of the modern computer.

In “Computing Machinery and Intelligence,” Turing outlines the template of the modern day computer with an “imitation game” and a question: “Can machines think?” Interestingly, in this initial version, Turing proposes the game is played with three people, which includes “a man (A), a woman (B), and an interrogator (C) who may be of either sex.”  For Turing, the object of the game is for the human interrogator to determine which is a man or a woman. Later on, the objective changes, as Turing posits the human interrogator must figure out if the player is a computer or a human being. If the binary choices are undetermined by the human interrogator, then the computer is intelligent. The Turing Test does not identify if the computer is organic, or can think, but it tests whether the human “interrogator” can determine whether one is a computer or not.

Similarly, in the Turing test on gender, the question pivots on whether the human can or cannot distinguish gender. While gender frames and introduces Turing’s test, it is largely obscured in the history of computing and artificial intelligence. It is yet another reason why we may be thankful to the film Imitation Game for addressing the issue of sexuality on the big screen. Because, as Turing proposes, the questions of gender, specifically, who is a man or a woman, parallels questions of artificial intelligence. If the human interrogator cannot determine woman or man, and similarly, human or machine, then the machine passes the test. Artificial intelligence and gender are intricately tied together.

Jack Halberstam’s rereading of Turing explains: “By using the sexual guessing game as simply a control model, however, Turing does not stress the obvious connection between gender and computer intelligence: both are in fact imitative systems, and the boundaries between female and male, I argue, are as unclear and as unstable as the boundary between human and machine intelligence.”  Halberstam points out, gender itself is a performance, and “imitative” as Turing stresses. And although the “obvious connection” between the two is not highlighted within Turing’s theorization, gender introduces the possibility for a test of artificial intelligence. Like the Turing Test, gender is performed and imitative; however, there are additional significant queer considerations of artificial intelligence’s imbricate ties with gender and sexuality.

Turing’s personal life and desires prompt reconsideration of the history of digital computing as a queer history. As queer scholars and biographers such as Halberstam, Jacob Gaboury, Andrew Hodges, and others have outlined, Turing was homosexual and while at the time homosexuality was a crime in the United Kingdom, he lived his life largely as an openly gay man.  However in 1952, two years after the publication of “Computer Machinery and Intelligence,” Turing was convicted of Gross Indecency by the British government. The punishment for his crime forced Turing to undergo hormone treatment, believed to “solve” homosexuality. Turing’s body during treatment “was rendered impotent, and he began to grow breasts.”[ii]  While the hormones might have biologically altered Turing’s body, the injections of hormones that could transform a body from male to impotent, for a “correct” gender identification. Halberstam points out that the estrogen did not resolve Turing’s sexual preferences “as desire remains as interference running across a binary technologic.”[iii] Instead, desire crossed the binary of what was considered “naturally” a man’s sexual predilection. While the hormone treatments did not stop Turing’s desire for men, unfortunately, the criminalization reshaped Turing’s life to an end. In 1954, Turing committed suicide from eating “an apple dipped in cyanide.”[iv] Turing’s untimely death is thought to be a ramification of the deeply homophobic treatments Turing endured. It wasn’t until 2013 that Turing was posthumously pardoned for his sexuality. Yet, as Halberstam writes, the apple Turing ate and his suicide, “bizarrely prefigures the Apple computer logo.”[v] Turing’s untimely death is a sad and horrifying story of state sanctioned homophobia. Yet, Turing’s theorization of artificial intelligence prompted John von Neumann and other computer scientists in the 1950’s, to make possible our modern day digital computer. As Turing’s life indicates, the theory and history of the digital cannot be divorced from questions of difference.

And what is beauty without difference? 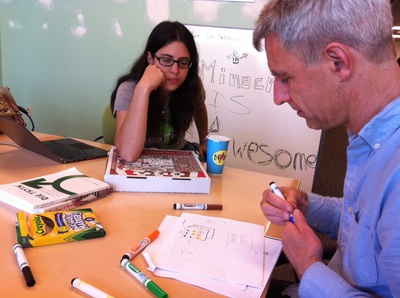 I want to end with some questions on contemporary gender and gaming. It is widely known within the mainstream and scholarly discourse that feminist game creators and critics have been harassed by #gamergate and other unidentified misogynist gamers. Feminist creators and critics such as Brianna Wu, Zoe Quinn, and Anita Sarkeesian have been harassed, trolled, and doxxed for their outspoken critiques of misogyny in games. I feel at this juncture that it is pressing that the academic queer gaming community, and larger field of new media studies, to discuss these issues on gender and games.  It is pressing, not only because of the extremity of the harassment, which includes rape and murder threats, but also because these threats against a more inclusive gaming community are contrary to the possibilities and beauty of games: zap goes brainy radicalism, sexy nerdiness, and open creativity when mixed with the simplistic game of misogyny.

If we return to the Imitation Game, the task to determine between human or machine parallels the ability to determine the difference between a woman and a man. As I outlined above, feminist critics may say that the Imitation Game then, is a queer game that blurs gender differences as much as establishing then the possibilities of the digital brain. The Imitation Game sheds light on how a fluid understanding of gender may have shaped Turing’s vision of a digital universe. This first game that started it all, in actuality, troubled normative ideals of gender. With that in mind, how then do we understand the politics of gender espoused by #gamergate? How do we push games and gaming culture away from a game that can be determined so easily and simplistically like the game of misogyny? And instead, ask for contemporary games and a gaming culture that is transformative, and re-imagines the beauty of gaming and gender as Turing once did? I am not a gamer, and so I must trust that gamers–the more imaginative of us digital ones–will show us how.