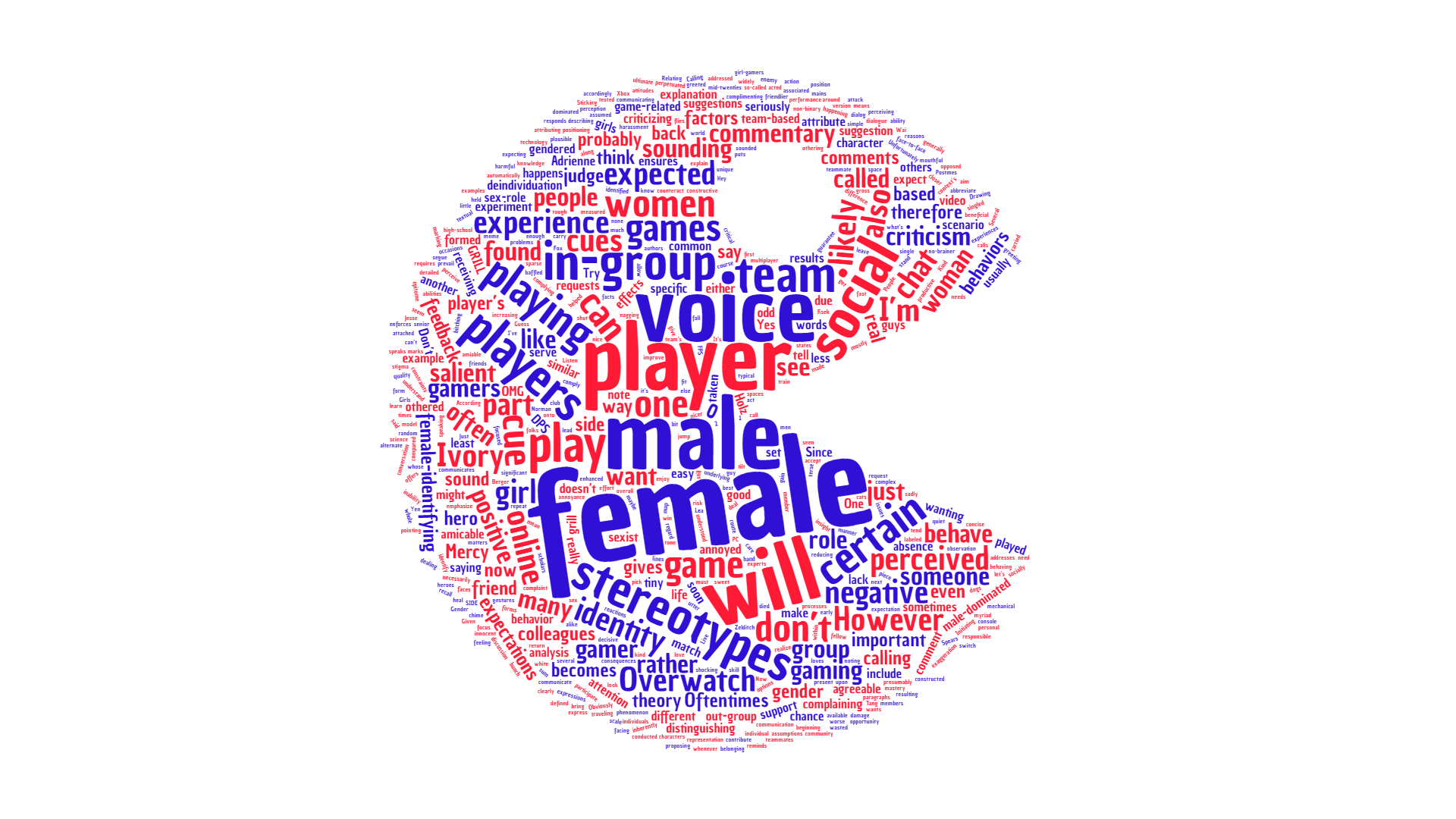 Lena received her PhD in Communication from the University of Southern California’s Annenberg School for Communication in 2017. Her dissertation examined the effects of viewing different types of female streamers on the perception of female gamers as well as motivations to view Twitch. Other research projects investigated hero choices in team-based online games, trust and reciprocity in online games and the nature of social networks in MMOGs. In her free time, Lena watches esports, plays on a semi-casual Overwatch team as the main support and dabbles in her former main game World of Warcraft.

For those of you who are not female-identifying and have not played online games with voice chat before, this might seem like a gross exaggeration. However, I’ve been greeted with some version of this dialogue many times at the beginning of a match. I usually say “Hi” or make a game-related suggestion and in return, I am called out as a girl. Oftentimes, another player will chime in and carry the dialog on by saying “No, it can’t be a girl. Girls don’t play video games.” Just a meme, they say.

Now, let’s look at this greeting for what it really is. The next few paragraphs will go into a detailed explanation of how this innocent sounding conversation can serve as a segue into more harmful behaviors. A myriad of factors play a role in how gendered expectations are formed and acted upon. I will focus my discussion on how voice can serve as a distinguishing social cue that results in attributing certain sex-role stereotypes with female players and expecting them to behave in a certain way. Other factors playing a role in how these stereotypes are formed and perpetuated include the lack of representation of women in gaming, the perception of mastery of technology as an inherently male quality and many attitudes and assumptions traveling from real life into the gaming space. In their sum, all of these factors can contribute to the woman being singled out, associated with certain stereotypes and expected to behave in a certain way.

So how do we get there from “OMG A GRILL”? Initiating me into the group of (assumed) male gamers through calling me out as a ‘real grill!’, ensures that I’m automatically othered. It marks me as different from the in-group, which, presumably, is male. Obviously, not all these male gamers are alike. One might be in his mid-twenties, another one a senior in high-school. At least one of them is probably not white. One loves cats, the others love dogs. However, in this scenario, none of this matters because the only salient distinguishing cue present is the voice. When we communicate online, we experience a lack of social cues as compared to communicating face-to-face. When playing a team-based online game with random players, we usually don’t see their faces, their expressions, their gestures. Oftentimes we even only have textual chat available; sometimes the game offers a voice chat. When social cues are sparse, people tend to fall back onto the group identity due to their inability to identify themselves and others as individuals with their own set of cues. The group identity becomes more salient than the individual identity and people experience so-called deindividuation effects.

The theory describing this kind of behavior is called the social identity model of deindividuation effects and because this is even a mouthful for scholars, we abbreviate it as SIDE theory by Postmes, Spears, and Lea (2000). Adrienne Holz Ivory and her colleagues conducted an experiment within the Xbox Live community and found that in absence of other social cues, a player’s voice becomes a salient cue. In other words, their voice becomes a social cue that either puts a player into the in-group or the out-group. Given that online games (PC or console) are still male-dominated (or at least perceived as male-dominated), the in-group is therefore defined as male (Ivory et al., 2014). Relating this back to our scenario, here is what really happens:

A female player speaks in voice chat and a male responds by calling her out as “GRILL!”, clearly marking her as not a part of the in-group. This action not only calls the attention of all team members to this one player who is the odd one out but also gives way for a bunch of behaviors resulting from not perceiving someone as part of the in-group. It reminds the male players of their group identity and enforces the feeling of belonging with them rather than with the female. And on the other side, the female player will likely be facing the whole in-group whenever she wants to express criticism or make a game-related suggestion.

Drawing from my personal experience of playing Overwatch, such suggestions could include proposing a hero switch or an alternate route to attack. Sticking to the example of Overwatch, common criticism could be pointing out that someone wasted their ultimate ability or did not play in a position beneficial to the team. It also gives the in-group the opportunity to recall negative stereotypes about ‘girl-gamers’ and attribute them to the othered female in the team. Some examples of such common stereotypes would be that girls are generally worse at gaming than guys, that they only play games because they want the attention of male gamers, or that they only play support characters. Several of these sexist stereotypes have been addressed and tested in the form of a scale by Jesse Fox and Wai Yen Tang (2014). Yes, science has found that these stereotypes are widely held. And they are sexist.

In Overwatch, a stigma is attached to female Mercy mains (Mercy is the epitome of a support character who flies around the map to heal her teammates and bring them back to life). Since the character requires little mechanical skill as she does not need to aim, it is often said that women learn her because she is easy to play and easy to be carried by a good DPS player (DPS is the role responsible for dealing the most damage to enemy heroes). On a side note, good analysis of the reasons why we see so many women playing Mercy in Overwatch can be found here.

Calling the female gamer out also results in her being expected to behave ‘female’. Gender, as opposed to sex, is socially constructed. That also means that we attribute certain behaviors to each gender and expect people to act accordingly (Berger, Fisek, Norman, & Zelditch, 1977). In absence of other social cues, Adrienne Holz Ivory and her colleagues identified voice as a salient social cue. They also found that as soon as a player is gendered female, other players expected them to be more amicable, more agreeable, less critical. In their experiment, the authors measured how likely players are to comply with friend requests after receiving either negative or positive comments made by a male or female voice. When a female voice gives negative commentary, players are less likely to accept a friend request than they would be after receiving positive comments (Ivory et al., 2014).

Of course, you will now tell yourself, that is a no-brainer. Who would want to be friends with someone criticizing you rather than complimenting you? Guess what: they don’t care if it’s a guy criticizing them. Yes, for the male voice, there was no significant difference between the negative and positive comments in regard to complying to friend requests. According to Dr. Ivory and her colleagues, expectation states theory can explain this observation. People (not only men) expect women to be more agreeable and just overall nicer. This is even enhanced in mostly male-dominated spaces, such as multiplayer FPS games. Oftentimes, women are not perceived as experts so their criticism is not taken seriously and rather seen as an annoyance than constructive and productive feedback. Since it does not fit a female player’s expected gender role, her negative commentary is perceived as her nagging and complaining while a male player’s commentary is understood as an effort to improve the team’s performance. So once a female player has been called out, she is perceived as part of the out-group and expected to be quiet and amicable. As most of you who have played a team-based online game before will know, this does not leave her with many options to participate in the game. Her suggestions will probably not be taken seriously and her commentary labeled as ‘bitching’ rather than as feedback.

My own voice doesn’t sound very amiable when I’m focused on the game and communication needs to be concise and fast. When playing Overwatch, people often say that I’m complaining and tell me to shut up. This happens most often when I utter criticism, for example noting that a certain player has died too often and should probably pick a different hero whose abilities will allow them to prevail against a certain other hero. On several occasions, a male teammate would repeat my comment, not necessarily in a friendlier tone, and reactions would be much more positive. Most likely, you will now think that I must have just sounded more annoyed. However, it is important to understand that as soon as a woman does not sound sweet and nice, you will perceive her as sounding annoyed and her comment as a complaint. When a male player communicates in a similar manner, on the other hand, it will likely be perceived as decisive and terse due to the context’s unique constraints. It is important to realize that othering the woman on the team early on will lead to other players having very specific expectations.

On an important side note, I want to emphasize that I’m speaking about the consequences of sounding female in voice chat, based on my own experiences as a woman in gaming. Unfortunately, this doesn’t mean that female-identifying gamers who do not sound female don’t experience other forms or harassment or that non-binary folks don’t deal with similar problems. However, this specific piece addresses sex-role stereotypes and gender expectations based on a single social cue, a female sounding voice of a female-identifying player – just one tiny part of a complex set of issues.

While it was not too shocking (sadly enough) to experience this behavior when playing with a team of male players I was baffled when the first female player called me out as “OMG! A grill!”. However, if you think about it with the knowledge you now have about what’s happening, there is a simple and plausible explanation for this phenomenon. Through calling the other girl on the team out, the female player ensures to other the other female, therefore positioning herself closer to the in-group. Kind of along the lines of: “Hey guys, see me? I’m on YOUR team here, SHE is the odd one out!”

I want to judge women for behaving like this. But then again, who am I to judge them for wanting to be part of the club? For them wanting to not stand out and just play a game like any other gamer? It’s a tough world out there for us sometimes and maybe this analysis helped you gain a tiny bit of insight into the underlying processes. What can you do to counteract?