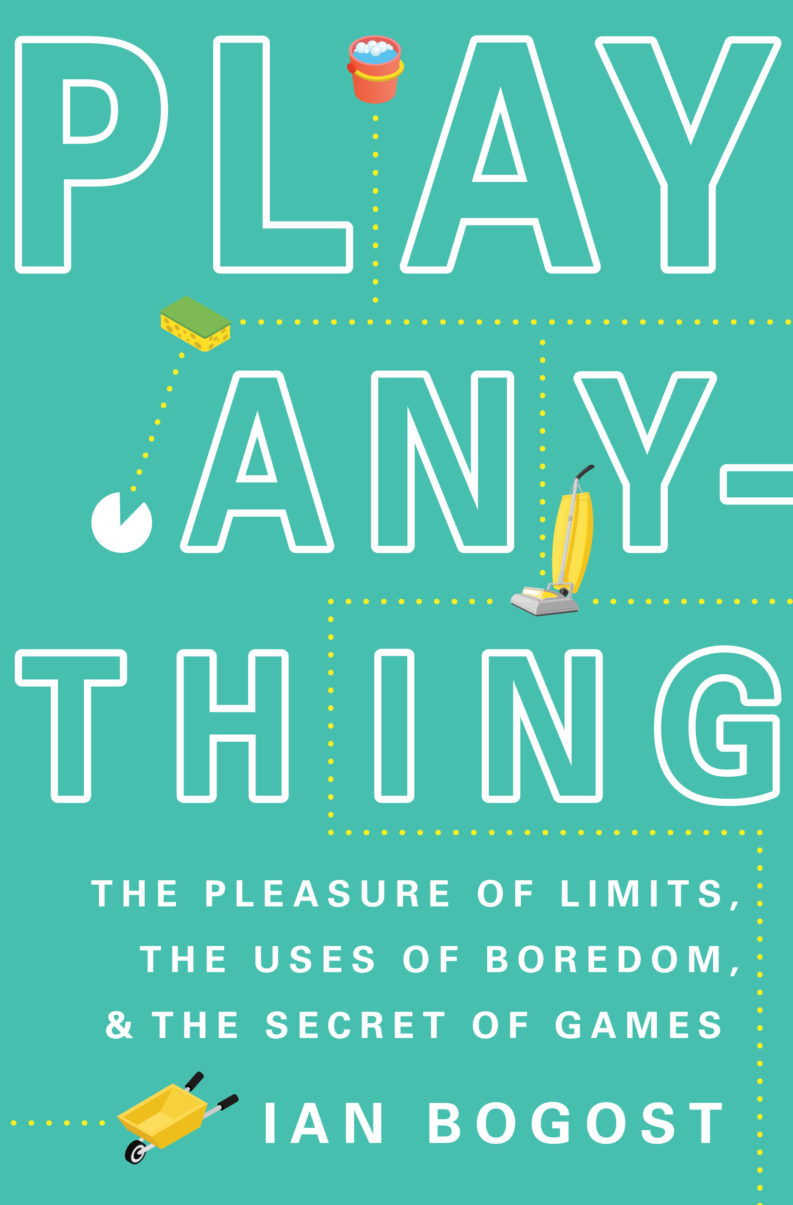 Nick LaLone is a 4th Year (ABD) in Information Sciences and Technology and Penn State. His work centers on expanding the study of play to more than games. There is a tragically behind collection of his work at www.nicklalone.com and he can also be found posting pictures of his cats @Nick_LaLone.

Throughout my time in Grad School, I have been intensely curious about the word play and increasingly disenchanted by the idea of game studies. If play and culture are inexorably intertwined then it seems to me that studying games does little, whereas studying play in things that are not games can give unique insight into culture itself. However, in order to really get at this concept one would have to embrace the work of Johan Huizinga in a way that is often overlooked, discarded, avoided, or reduced to absurdity – the magic circle. When I found out that Ian Bogost was writing a book specifically about this concept of play, I was excited to see what he had to say on the subject. To that end, Play Anything: The Pleasure of Limits, the Uses of Boredom, & The Secret of Games may be one of the important books on the study of play I have found. Unfortunately, the book will most likely remain largely ignored because it is nearly impossible to pin down what the book exactly is.

Is Play Anything a self-help book? A book about design? A humanities monograph? The likelihood of each of these things is very high but no one category stands out. While I read Play Anything, I would read various passages to my wife. Each time, she would nod in agreement but ask, “What is that book even about?” I could not really tell you. The book is about everything yet nothing at all, and this is why I decided to write a review of it – the act of reviewing will pin down the meaning the book creates for me, but for you the book may mean something else entirely. That itself is a rarity among books about play, since the last 16 years of game studies have been dominated by establishing games as a unique object worthy of inquiry in and of itself.

By approaching the act of play rather than the study of individual games, he better serves game studies as a whole. He does this because if we take Huizinga’s magic circle seriously, we can access a portion of play we often do not discuss – that it creates culture itself. The tricky part of using this aspect of play is that Bogost must help us get past the absurdity of the magic circle. To do this, he sits at the foundation of all definitions of play: “Play is a way of operating a constrained system in a gratifying way.” We typically define play through this set of premises: play is purposeless, it has its own sense of time, its own sense of order, and takes place inside its own special space. Bogost’s definition allows us to expand the term. Play is everything: from The Astyanax to yard work; from errands to Twilight Imperium; from Tetris to parenting. Gratification comes from operating the system in a way that provides us gratification – not fun. In fact, the book purports, we do not really know what fun is.

The problem with fun is that we all think we know what it is; yet, in truth, it has no definable, operational meaning. Unlike play, the meaning of which has shifted throughout cultural and linguistic change, fun only very recently appeared as a term. However, fun has seemingly gained more power than the concept of play itself. Indeed, if you look at reviews of games, fandom conversations comparing games, or even listening to people at an arcade talk about different machines, you will often hear about one game as being more fun than another. Yet fun, Bogost asserts, “is not so much a feeling but the exhaust produced when an operator can treat something with dignity.” Dignity is an interesting word in this quote. One could also use the term “Authentic” and get in to Heidegger’s Das Man but exhaust is more important than that: exhaust does not refer to play itself but about how we have come to treat play only in terms of its outcome, “Was this fun?”

This harkens back to Bogost’s definition of play – “operating a system in a gratifying way.” Only, this is a general description. Bogost unpacks this a little by calling to mind the philosophies of Heidegger and McLuhan, or ready-at-hand / present-at-hand and figure/ground. These two philosophical constructs help us understand what occurs when we play – we take something that is ready-at-hand (potential of a thing), something in the ground, and we reframe it as present-at-hand while taking that presence a step further by redeploying that object in new ways. For Huizinga, this was the creation of the magic circle. This is the bounding of space whereupon play begins. Bogost takes this magic circle a step further by considering the act that takes part inside of that circle. He then corrects the problems with the term (namely, the term itself) by referring to the creation of a bounded space as a playground.

My favorite example of playground creation is a story about Bogost’s daughter. One day, he was at the mall and it was not particularly welcoming. Being in a hurry, he was in a particularly foul mood while dragging his daughter by the hand through the mall at a speed her little legs could handle. She began to skip and as she did, began to tug on her father’s hand. He finds that she had begun to skip and avoid cracks on the ground and had turned the misery Bogost was feeling into a playground. To use the terms in the previous paragraph, his daughter has taken the ready-at-hand status of the mall flooring and turned it present-at-hand or into a playground, wherein she began to explore that presence. This exploration consisted of limiting herself further. In doing so, she escaped the reality of the situation by accepting it totally.

We accept very little about our lives when it comes to the systems and limits that surround us. In fact, Bogost tells us that we have come to do everything we can to distance or reject those “mundane” aspects of our lives. As such, we have become so enamored with irony – saying one thing but meaning another – that irony is now the currency of our age. Our lives are as such now that the necessary tasks of any day are seen as a nuisance. In fact, we are surrounded by so many limitations, so much nuisance, that we can no longer see the wonder of what those limits represent. We disdain these omnipresent rules, limits, and common ordinary events that they have become, as water is to a fish – necessary for life yet invisible due to its necessity for everyday life.

This is best illustrated by a model of the formation of irony:

(Potential): Anything has potential…

(Pursuit of fun): … that potential must be fun…

(Ironia): … yet all fun is insufficient

The moral of this book is simple but also extremely difficult to understand: given the existence of such pervasive irony, play is not doing what we want but doing what we can with what is given. As a book about play, I think this book gets at how play manifests culture. The most useful aspect of this book, however, is that it also discusses how the concept of play retreats through mistrust, through a seeking to escape reality, through fun seeking or joy seeking behaviors.

Ultimately, this exploration of playground formation is what I believe launches this book into the foreground of a very important issue – we have trouble in game studies not because games themselves are immature or not useful, but because the very act of designing these games is essentially applied ironia. It calls to mind the debate between effect and meaning that Henry Jenkins described. It also calls to mind the criticism from Roger Ebert about the artistic potential of games. Can games at present be art if they are designed as a means of escape and not a reflection of ourselves?

If you are engaged in the study or manufacture of games in any sense, you owe it to yourself to read this book. You may not agree with it. You might not have the same reaction I had to it. You might not accept what it has to say but that should not be where your time with this book stops. Any reader should take a step further and ask, “Why do I think this way? Why did I react this way? Are my designs ironic? Is that disruptive?” The next step is to begin to reconnect your daily life to the games you play, the games you design, the games you critique, and the way you feel about the people who play them.