Natalie Zina Walschots is working towards a Ph.D in Interdisciplinary Studies, focusing on feminism and video games, at Concordia University. She is the author of two collections of poetry, DOOM: Love Poems For Supervillains and Thumbscrews, and her non-fiction appears in National Post, Quill & Quire, The Globe & Mail, Rue Morgue and Exclaim! She has frequently been in the newspaper for swearing and is very good at making the Internet angry.

The universe of the Dark Souls series of games (Dark Souls I and II, and Demon’s Souls), and their spiritual successor Bloodborne, is an intensely hostile one. In his article “Death Becomes You,” Bryan Dawson argues that the Dark Souls games “are arguably the toughest of the previous console generation.” Bloodborne is a worthy successor both in design and punishing difficulty. Forbes ran an article in which Paul Tassi examined whether a Dark Souls “virgin,” someone who had not played through the other games in the series and therefore developed or built up any kind of tolerance to how hard the games are, could even survive Bloodborne. Tassi wondered, “Though certainly a great game for those familiar with its playstyle and difficultly curve, is it possible to enjoy it without being a diehard fan of From Software and Hidetaka Miyazaki? Is it even remotely playable if you’ve never played either Demon’s Souls or Dark Souls?” Tassi concludes yes, and explains that the difficulty of Bloodborne is actually part of its genius: “Bloodborne has the ability to create a sense of accomplishment in a way that few other games can replicate.” Rather than just being impossible, Bloodborne is challenging, and the reward for answering that challenge is sweet. The difficulty enhances the narrative and deepens the emotional investment of the player. It also makes the game genuinely more frightening because of the constant risk that the player often finds themselves on the very wrong end of. The sheer hostility, the brutality of the world, makes it more dangerous, more real. Tassi explains the difference saying, “but Challenge? That’s different. A Challenge can be Difficult, but it requires strategy, patience, intelligence, and skill to complete. It’s more than simply the ability to bash your head on a wall over and over again until the wall finally breaks. This is where the true genius of Bloodborne lies.” 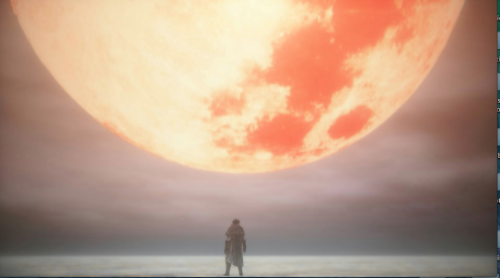 But the fact remains that despite being worth it the game is wickedly difficult. When I started playing it took me two full days to cross the very first courtyard, carefully hiding from and quietly picking off scythe-wielding villagers who moaned and wailed, partially transformed into beasts. I would almost have made it past the flaming body of a crucified werewolf when a mob would appear and surround me, or an ogre smash me to bits with a brick, or a swarm of giant murder-crows pecked me to death. It took me two days to get to that very first save point. It was gruelling. It was frustrating. And when I first vanquished the Cleric Beast, a huge werewolf and final barrier to the first save point, where I could finally begin to level up, the feeling of triumph was positively intoxicating. Bloodborne is ridiculously hard, and in a very particular way, one that makes it strangely, sublimely emotional. For all the gouts of blood and saw cleavers, there’s a great deal of affect in the awful macabre necropolis of Yharnam. There is a beautiful doll that comes to love you. There are frail human survivors who you can lead to safety from peril. A boss can be stunned by the sound of his lost daughter’s music box. A small gift can move an automaton to tears. 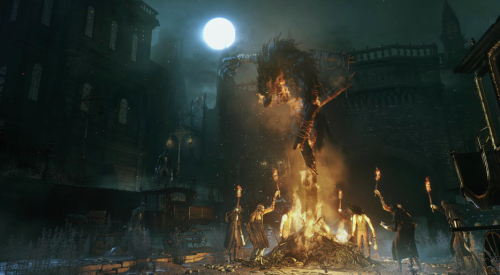 Gareth Damian Martin wrote about the “Transcendent Quest for Beauty” in Bloodborne, and the way its director Hidetaka Miyazaki (who also creatively led the rest of the Dark Souls games) led the game in this direction. He relates an anecdote where Miyazaki gently chastised an artist for creating a draft of a boss monster that was as grotesque as possible, covering in maggots and ravaged by decay. He asked, instead, that the artist “instead try to convey the deep sorrow of a magnificent beast doomed to a slow and possibly endless descent into ruin”. Martin explains, that it is not Miyazaki’s goal to punish the player with merciless difficulty and unrelenting ugliness, but to create the conditions for something sublime to take place. 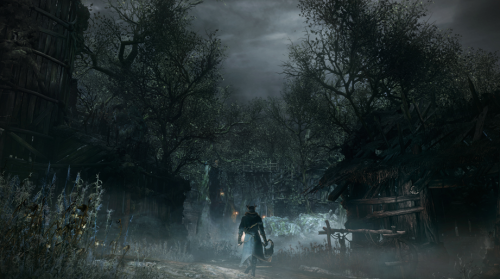 None of Miyazaki’s other worlds—not the districts of Boletaria nor the peaks and troughs of Lordran—have ever felt so disgustingly real. Hours after you drag yourself out of the dingy corners of central Yharnam to the heights of the Cathedral Ward, buffeted by the winds that tell of a coming storm, you’ll gaze down on the spires and spindly alleys and almost think it looks peaceful. Almost beautiful.

And Martin is affected, deeply: “I almost felt a sense of sadness as I drove my cleaver home. . . Bloodborne, meanwhile, sparkles with moments of rare delicacy—the gasp of a doll as she wakes from a dream, or the desperate prayers of a woman whose fate is already sealed. The game provides a clear context for this tragedy through the institutions and hierarchies of its world.” These moments of softness, of light, make the horror all that more profound in comparison; the gentleness enhances the violence.

As much as Bloodborne is a world of horror, it is also a world of tragic beauty, sublime decay, delicate anguish. No matter how covered in blood I became, no matter how many times I died in profound frustration, whenever I caught a glimpse of the sky, the twisted spires of Yharnan’s cathedral’s against a perpetual blazing sunset, or the cool splendour of the moon, I’d put down my weapon for a moment and just look. It was so beautiful. It all hurt so much and was so, so beautiful.

So, I started writing poems. 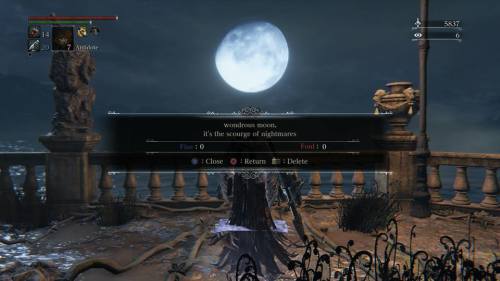 Love Notes In A Haunted House

Writing messages to other players has been a component to several Dark Souls games. If playing online, the player is able to choose from a set of fixed phrases and words, designed to leave (helpful?) missives that others can discover in their own games: warnings of upcoming ambush, hints or strategies to defeat and challenging enemies, or a warning of a trap or hidden danger. Players can also rate notes by how helpful they are, giving a nod to those in other worlds who helped them on their difficult journeys.

Bloodborne follows a similar mechanic; by selecting the notebook in your inventory, you can scrawl a note and send it out into other players’ universes, where it can be rated “fine” or “foul” according to how helpful (or amusing) players who stumble across the missive find it. There’s something moving about this process, like a note in a bottle sent out across other dimensions, little gestures of kindness and goodwill in the decaying and endlessly hostile environment. Hunters sending little vials of hope across the cosmos; tiny pearls of help. A colleague of mine, Braydon Beaulieu, wrote a few notes in Bloodborne that were not about strategy, but self-care. Little reminders of kindness in the bleakness. In response to this, I wrote a poem, my own little wish for gentleness. 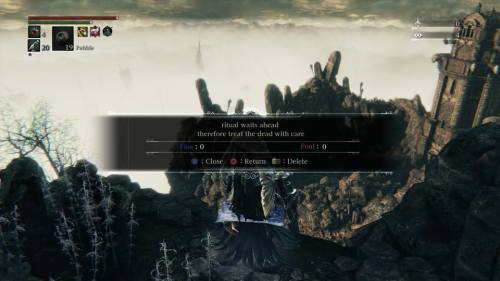 The notes engine is remarkably useful as a poetic constraint. There are a set number of phrases that can be combined in a limited number of ways; the vocabulary is specific and strange, baroque and strategic, grand, and practical. My friend and poet Bill Kennedy mused on Facebook that it was clever of Bloodborne‘s creators to design a whole game around a poetry engine. So I kept writing them, and soon started a Tumblr called Fine or Foul to keep track of  all the strange little notes I was sending out into the ether (as notes do evaporate after a short period of time in the game). I started tagging the project as the #BloodbornePoems. Then, strangely, hilariously, Kotaku noticed, and wrote about the project. They seemed a little moved by the project, noting: “Yharnam may not be an especially cheery place, but it’s lovely to watch the players do their best.” Twinfinite also picked up the story. Matthew Gallant has created a Twitter bot called Yharnam Notes in honour of the project. 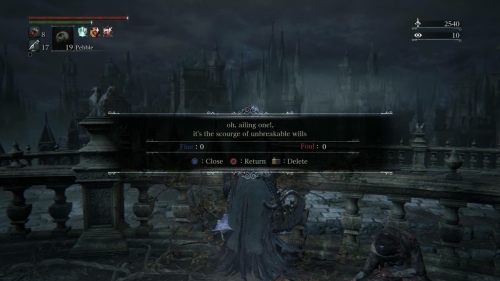 At last count, the Fine or Foul had 4,651 followers. Something here resonated. Something about this connected with players. Love notes in a haunted house. 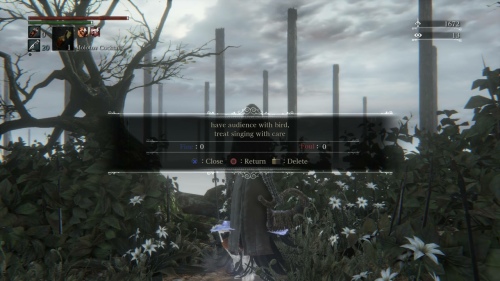 The world of Bloodborne is an intensely harsh one, and one that encourages hostility. The game’s co-op mode is intensely rich, but engaging in it also leaves players open to attack; when inviting friends into your game, you open the way for hostile invaders, who will murder you for reputation and blood echoes (in-game currency and the means by which you level). Going into someone else’s game and fucking their shit up can really be quite lucrative. Notes are one of the few aspects of the game that actually encourages players to be kind to each other. Leaving good notes, ones that other players will rate “fine,” is rewarded: whenever someone rates your note positively, your health is fully restored, which actually saved my life in game in several rough moments. Rating a note positively therefore becomes a way to give back, to say thanks to a little moment of helpfulness (or beauty) that another nameless, faceless hunter left for you to find. Little moments of intimacy in a world gone rotten.