Since I met them, I’ve known Caro primarily through the former three spaces, reading scripts and creating theater together. As such, I was excited to learn more about their games, especially while celebrating the second anniversary of i’m sorry did you say street magic, a gamemaster-less city building game. Caro is also one half of Small Planet Games, a game design collaboration with several ongoing upcoming projects, including working as designers-in-residence to create a new tabletop system for the Multiverse gaming platform. I spoke to them about getting into tabletop games, being a nonbinary game designer of color, and intentionality in the design process. 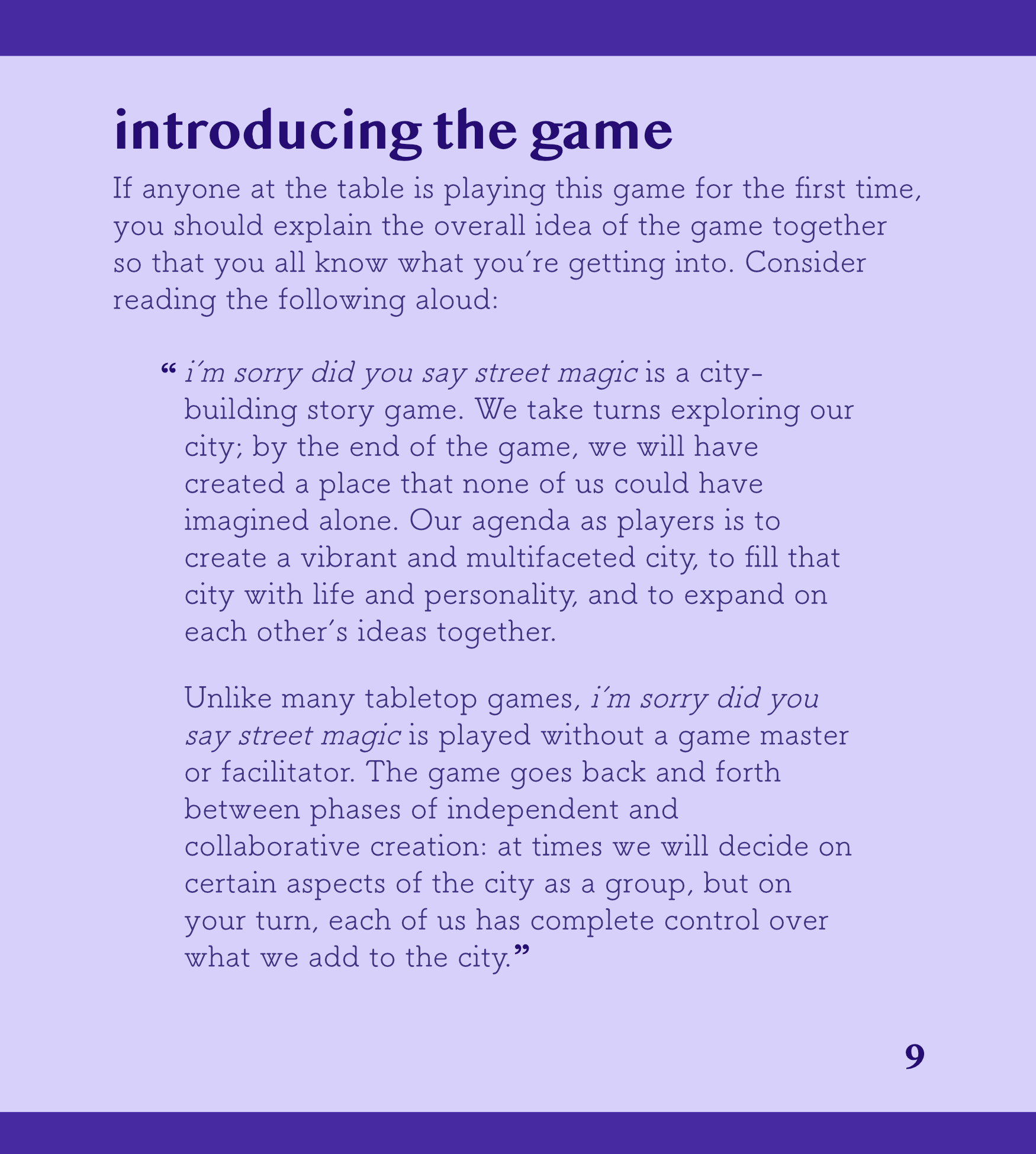 Olivia Popp (OP): I primarily know of your theater work, and then more broadly around the exciting things you do in games, but not as much about how you first got into the tabletop games space. Could you speak to that first?

Caro Asercion (CA): It’s something I’ve always sort of existed adjacent to. In pop culture, it’s like, “Oh, D&D!” or cartoons that have their episode about all of the nerds, or sitcoms always have that sort of archetypal existence of D&D as a ubiquitous kind of pop culture phenomenon. But tabletop took me a while to find a foothold in, I think, in part because starting with a game like Dungeons & Dragons or GURPS, it was very crunchy and very mechanical, and I think I just bounced off really hard. The thing that did sort of get me into it was Actual Play podcasts. Especially as I was moving into school and dealing with classes and things it was like, I haven’t had the time to put this emotional investment to crafting a character or crafting a world, but I can listen to it secondhand and listen to the work that other people have done, and engage with that as an audience member and kind of absorbing both the story that they are crafting, but also the mechanics and the understanding of the system kind of via osmosis. There’s a whole parasocial relationship aspect to that. That was sort of how I learned that there were other systems besides D&D, Warhammer, Pathfinder — that they’re not only these ones, but there are also ones that are significantly simpler that just play in completely different spaces or explore different things.

OP: After you learned more about the vast array of games that exist, how did you go about finding your niche?

As far as my personal foray into that space, it wasn’t until I realized that some of these games are so simple — one of the first games that I discovered in that space was Alone Among the Stars by one of my friends Takuma Okada, and that was a game where the only things you need to play this game are one six-sided die in a deck of cards, and it’s just like two pages. I was like, that is so simple, like you don’t need three hours of time; you don’t need five players. It’s just super accessible and super elegant in that way. And that just got my brain turning about the simplest way you could approach a game. I was kind of lucky in that I managed to get in right as the itch boom was starting to build. At the time I published my first game, it was like 1000 or 1500 digital tabletop games were available on itch. I think it just passed 7000 tabletop products or things in that category earlier this month, so it’s been growing significantly in the past two years.

I think especially in the indie space, I know a lot of folks who are thinking about their brand identity as a game designer versus as a person, especially when it’s compared to something like Wizards of the Coast, where Dungeons & Dragons is so massive and ubiquitous. I know a whole bunch of people who are like, “I’m going to create the game that people play instead of D&D,” and it’s like, no, you’re not. It just has such a huge sense of cultural gravity. And that’s very cynical of me to say because I want to see more of this diversity in the gaming ecosystem, but there’s just so much cultural shorthand that’s connected to D&D that finding the way to pull people away from that or to find your own foothold is very challenging.

OP: What are you most interested in exploring in your games, in any sense of the question?

CA: There’s definitely a quality of elegance I would say as far as not trying to get bogged down in needless systems. I think that is one of the things that is very dear to me, even just as a person. At least, the things that I’ve written down on my itch.io page are themes of diaspora, displacement, magic, and wondrous reverence for the places we inhabit. I think a lot about place, physicality in general, and being intentional in a very spatial way about the games that I’m crafting — but also the way in which they are presented and the stories that you tell through space. So like with street magic, for example, like that is a game about crafting a city. But it’s using a malleable geography where it’s not necessarily where you’re going to draw out your literal and explicit map. It’s going to have that flexibility to it. And I think that is a quality that I try to carry through into my other games. Not every game is one where you come away with that artifact of play, like here is the map that we’ve created or the character sheet that I’m leaving with. Sometimes you just talk through a conversation and that is the end of the experience. 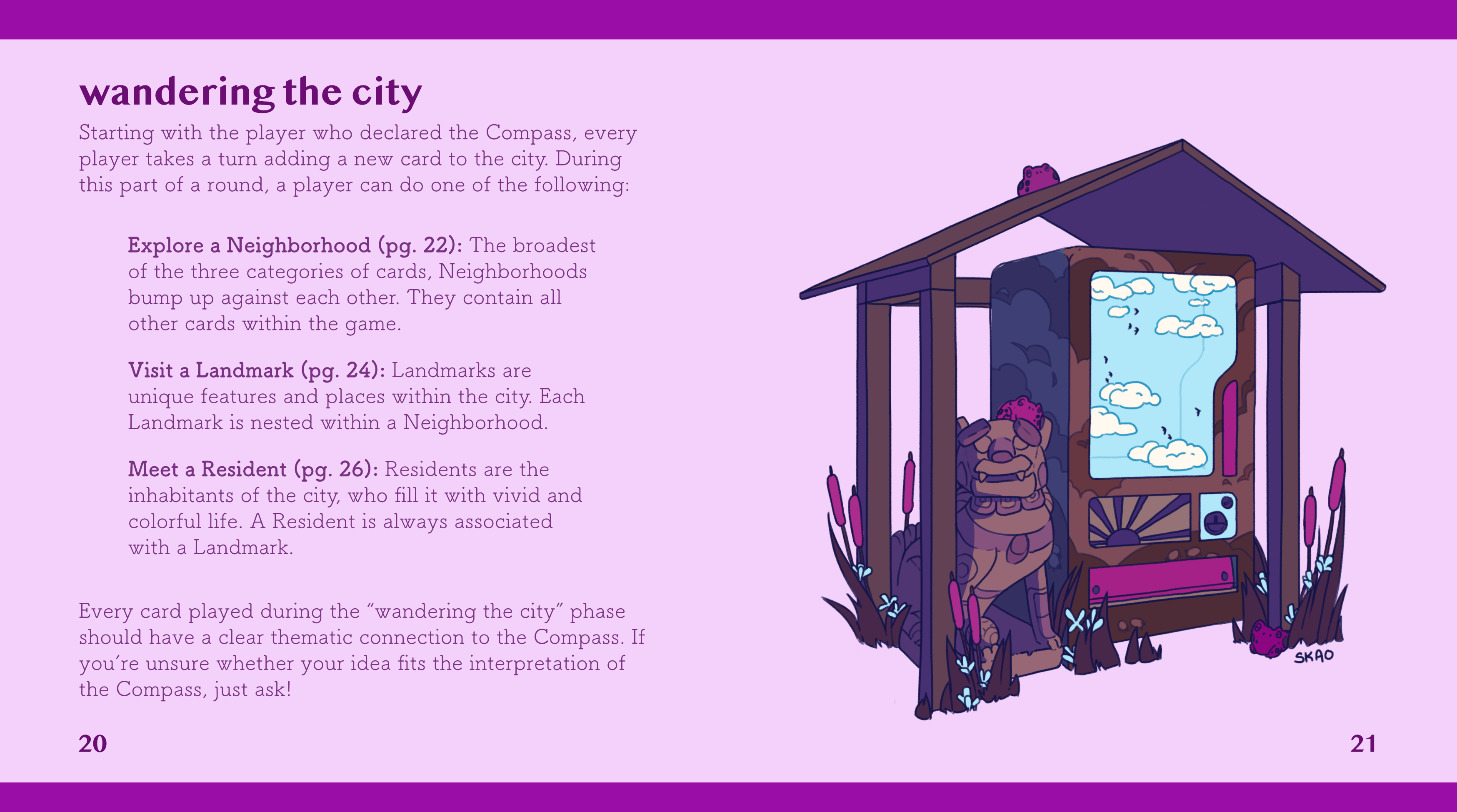 OP: That’s really interesting to hear about your design motivations. What about theme or content — where does the spark or inspiration for your games come from?

CA: It really depends, and that’s the cop-out answer, but it’s also the truth. There are some games that I have spent time thinking about — I have the tone, I have the thing that I want people to come away from this experience with. And sometimes you do just kind of get struck by lightning. There’s a bit of pressure to do something that is based off of like, what are the mechanics that are interesting to me that I’ve seen in other games, how can I take something that I’ve seen from somebody else, put a new spin on it, and just sort of churn it out? And I think that experimentation is super valuable as far as finding your own voice and finding the things that work for you, and that experimental work is really valuable for getting a sense of your own taste.

But especially having gone through the iterative process with a handful of games, and given the pace of the projects I’m working on now, having a bit more time to linger in that process and to be intentional about the work is what I’m trying to do as far as the pace. I’ve slowed down my production schedule which is more sustainable. It’s also just like, I’m doing more work with the theater company that I’m working with. Having a day job and that commitment is something that I’m balancing. We live in a capitalist hellscape — I’m not trying to burn myself out in that way!

OP: I’ve been curious about the role of the audience or the participant in a piece of art, a work, or a game. How do you think about the player and their role or identity in the gaming process?

CA: Fundamentally, the rules are really only half the game until a player comes to the table. You can say that the text is finished, but until somebody actually sits down and has that experience —  it’s a “tree falls in the forest” situation. The act of playing and interpretation is an experience that is so intrinsic to the text but is also so personal. My experience playing a journaling game where I’m going to roll a dice or flip over a prompt and respond to a prompt that somebody gives me — my experiences as a multiracial nonbinary person of color is going to be fundamentally different from, for example, the experience of a cis white dude in Europe. We could receive the same question or somebody could ask both of us the same thing, but what we read, how we reply to that, is going to be so personal. Until you actually sit down with the game, the experience is not about performance of the self or necessarily identity formation, but it’s instead about dredging up or contextualization, or re-crafting or shaping the bits of yourself that you are pulling on are going to change depending on the game and depending on who you play it with.

If you’re playing a solo game, that is different from if I play a game with my queer and trans friends. That’s going to be different from playing a game with my family, which is going to be different from playing a game with total strangers, or you know, my communities of color, versus my trans community — there is overlap there, but they’re not the same thing. The thing about tabletop is that it is the act of creating stories together or individually. It’s not exclusively about an experience that is already there. So much of it is about what you as a player and as somebody who is experiencing that bring to the table.

OP: Thank you so much for sharing — I’ve really enjoyed hearing about your work. Is there anything else that you’d like to share about yourself or your game design?

CA: I didn’t really touch too explicitly on the question of queer and trans people of color in games — but we’re out here, and we’re thriving, and then we’re doing our own shit with games. A lot of the big names are hegemonic in that way — like D&D is monolithic, and it’s easy to overlook a lot of folks who are doing work and being subversive in their own tiny, resilient, individual ways. I don’t want to craft the narrative of like, oh, people are thriving in spite of that, but in some ways, that’s what it is.

If there was any message I could give, it’s that it takes effort to find those marginalized voices because they are not the mainstream. But that effort is worth it because everybody who is out here trying to craft their own individual thing, like the individual games and the small stuff, is where you’re going to find the thing that really resonates with you that’s not trying to cater to a one-size-fits-all demographic. And, you know, go on itch.io and try and look stuff up. You might just find your new favorite game there.

This interview has been lightly edited and condensed for clarity.