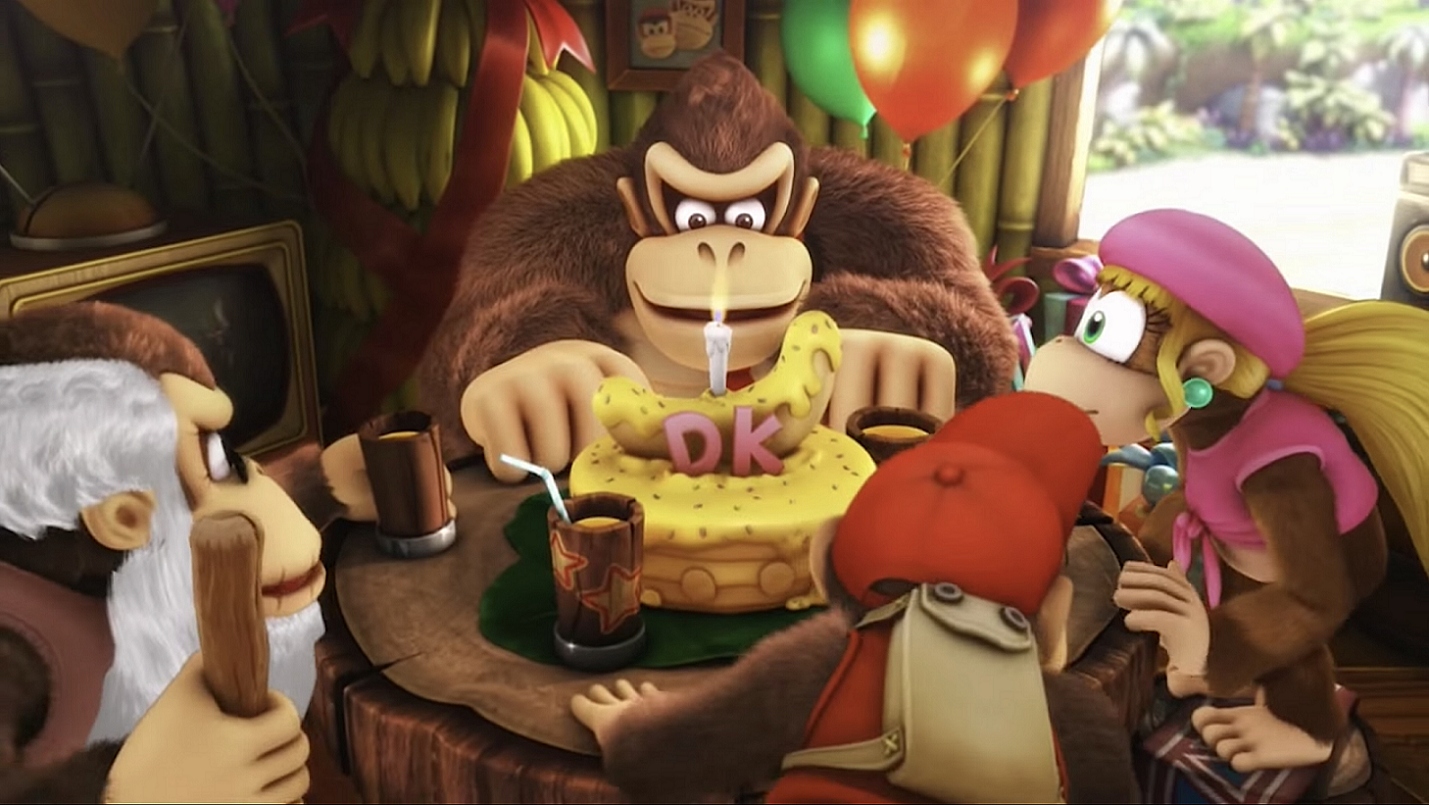 Niv M. Sultan is a writer based in New York.

We shrink down from three dimensions to two and a half, assuming our more primal forms: I an ape, she a smaller ape. Together we jump over chasms and swing from tree to tree on vines, gathering bananas, coins, puzzle pieces, and balloons. Occasionally, we succeed in collecting elusive blocks, each emblazoned with a letter: a K, an O, an N, or a G.

Our adventures in Donkey Kong Country: Tropical Freeze were demanding. For the most part, we obtained puzzle pieces after initially failing to do so; we missed as many vines as we caught; we mistimed leaps of faith and skewered ourselves on the sharp ends of spears, over and over again. Once in a while, we lost all of our lives (the aforementioned balloons), and thus had to restart the level we had been slowly working through. Our second attempts saw us stumble into the same pitfalls on our way to narrow victories. There were third attempts.

But as my partner and I played Tropical Freeze over the last two years or so, we gradually learned the laws governing the game’s universe. We grew familiar with the obstacles we had to overcome—armed penguins and buzzsaws and other hazards—and we figured out how to navigate them together. We couldn’t know precisely when they would appear, but in 2017, a year of increasing unpredictability, Tropical Freeze’s known unknowns were a comfort.

The cardinal rule of Tropical Freeze’s multiplayer mode is that players must stay together. The game enforces the rule subtly (by, for instance, prominently featuring platforms that break down a few seconds after being stepped on, encouraging players to synchronize their jumps), as well as overtly: when players travel too far in opposite directions, one of them gets knocked out, losing a balloon. And because balloons are a shared commodity, the team suffers together.

But if distance dooms players, proximity saves them. Fallen players don’t re-enter the fray automatically—they remain out of the game until they press a button that brings them back onto the screen, parachuting down in a barrel. The surviving player must then make contact with the barrel to release their companion. As a result, successful resurrection requires coordination, lest one player hurt themselves while trying to revive the other. So before deciding to exchange a balloon for another chance, players might ask their companions a question: if I return now, would guiding me back to life put you in danger?

Or, more fundamentally: in this exact moment, are you better off with me, or without me?

To maximize closeness, players can utilize Tropical Freeze’s most compelling mechanic: Donkey Kong (player one) can carry his companion (player two) on his back. When being carried, the companion loses the ability to control their directional movement, and goes wherever DK goes. They then have three options: they can fire projectiles, use their special ability (Dixie Kong, for example—my partner’s character of choice—can make the duo hover in the air with her ponytail), or hop off of DK’s back to regain total autonomy.

I asked my partner, who rejects even the slightest patronization when we play games together, why she was okay with me sporadically carrying her around. She explained that her competitive drive made her willing to relinquish some control of Dixie Kong here and there. She trusted me, the more experienced videogame player, to get us out of particularly tight spots, especially when we were low on balloons.

But we didn’t only link up under unpromising circumstances. I also carried her in times of prosperity—when balloons were plentiful—to grab out-of-reach items with Dixie’s ponytail-hover, and to generally make cooperative platforming a bit easier. But during our discussion of the carrying mechanic, months removed from our forays into Tropical Freeze, we had more frantic scenarios in mind: Dixie and DK standing on ledges, steeling themselves for escalating challenges, the possibility of lost progress looming.

Recently, I was trying to remember how many times my partner and I had finished a level with both of our Kongs alive, so I texted her to ask. She confirmed my memory of there having been only one such triumph, to whatever degree a months-old memory can confirm another months-old memory.

“But I think even then there may have been stages of the level where I didn’t come back from the dead until you finished it,” she added in a text, “in order to conserve lives.”

Reflecting on the year now behind us, I think not of Dixie and DK becoming one to gain something, but of them becoming one so as not to lose everything.

The defining characteristic of Tropical Freeze’s carrying mechanic is the fact that it’s voluntary. Because DK and his companion are both capable of terminating bouts of carrying, the activity is essentially democratic. If anyone’s not on-board, no one’s on-board.

Tropical Freeze is not above forcing cooperation, however. There are sections of the game that squeeze both players into a single mine cart, and send them rolling along a disjointed track. When in Tropical Freeze’s mine carts, players can’t control their horizontal movement—the cart advances at its own pace, limiting player inputs to jumping and crouching. But while the dynamic is disempowering, it’s also equalizing: one player jumping causes the mine cart itself to jump, taking the other player up with it. So whereas carrying gives one player control over the other (for as long as the other agrees to be carried), mine carts give both players control over their companions. They carry each other, simultaneously, whether they want to or not.

My partner and I were so focused on getting past the mine cart sequences that we didn’t notice the game’s true goal, an aspiration less tangible than finish lines. Symbiosis.

The mine cart segments are some of Tropical Freeze’s most difficult trials, not only because of their restrictions on player movement, but also because of the Kong archipelago’s nonsensical railway planning. Traps litter the tracks, which connect and disconnect erratically, at times moving up and down and back and forth on floating platforms. The rails were made to ensure not safe passage, but disaster.

There’s a metaphor for 2017 buried in Tropical Freeze’s mine carts; an analogy between a track designed to destroy all but a few of its riders, and America. Trump has, after all, laid the latter bare. He is a wholly American president: a logical embodiment of racism, sexism, homophobia, ableism, and other American traditions. His presidency is just another reminder that the track hasn’t changed since its creation.

It may seem flippant to compare two apes in a mine cart to a nation gazing into an abyss—but in a world in which Donald Trump is the president of the United States of America, why not take the Kongs seriously?

Perhaps in the future we’ll refuse to let the smoother stretches of the track lull us into complacency. We’ll learn how to climb out of the cart. To rip the rails from the earth.

It’ll probably be hard to do alone.

My partner and I still haven’t beaten Tropical Freeze. When we started playing the game, Trump was a presidential candidate, and when we stopped, he was the president. I imagine that it would be comforting to assign meaning to that shift—to realize, let’s say, that making Dixie and DK run from left to right became less appealing as America’s entire federal government ran from left to right. The truth is, though, that we simply forgot about the game. We wrapped up jobs, said goodbye to friends and family, and moved to a new city. Our nights spent playing Tropical Freeze together were among the many things we left behind.

I have considered playing Tropical Freeze on my own, but I have a feeling that DK would notice the absence of another pair of footprints in the sand and the dirt. My hunch stems from one of DK’s animations: when he tries to grab his companion, and finds no one (or nothing) to hold on to, he reaches out as if giving a hug, embracing the empty space in front of him.

So I won’t explore the islands without my partner, because I couldn’t bear the sight of DK extending his arms toward what isn’t there.

We approach a ravine filled with brambles and thorns, neither one of us carrying the other. We count down: three, two, one. We jump.