Today First Person Scholar turns two years old! We’d like to take this opportunity to look back on the year that was and to look forward to the years ahead. And so what follows are various ways of looking at FPS circa 2014—there’s a word cloud generated from all of the articles published this past year, stats on hits and popular articles, and thoughts from the FPS team.

Before all that, though, we’d like to thank you for being a part of First Person Scholar for the past two years. Your readership, contributions, comments, favourites and retweets have made this site something we’re very proud to be a part of. Thank you! 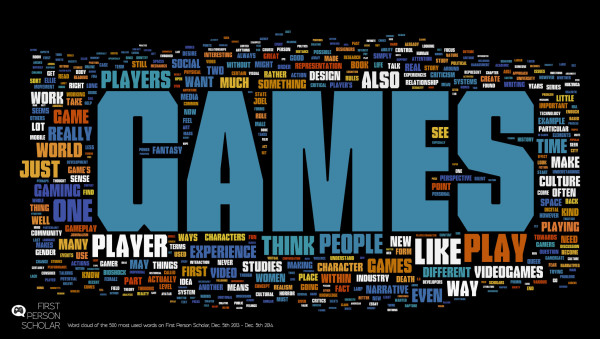 Our Most Read Articles

This year we thought we’d offer some reflections from our editors on the past year. And, given that it’s our birthday, some wishes for the year ahead.

Looking back over the past year it’s both easy and difficult to pick out highlights—easy because there are so many, difficult because I can’t mention them all. I’m immensely thankful for the wonderful following we’ve built up over the past two years, especially because it’s full of people I sincerely respect and admire.

I’m also truly thankful for the hard work of the FPS team—they’ve attracted and edited some wonderful submissions, interviewed some fascinating people, and provided thoughtful direction and support.

Lastly, I’m ecstatic to see FPS articles reaching new audiences, finding their way into course syllabi, German game studies journals, and even appearing in mainstream publications like the Huffington Post and the New Yorker. I think that’s what I look forward to most over the next year: continuing to expand the critical conversation on games and what they’re capable of because, ultimately, we all stand to benefit from that.

As Director of the Games Institute and the IMMERSe network, out of which FPS is based, I want to thank all the contributors, respondents, and editors for their incredibly hard work and generous and effective support over the past year (and more). FPS began as a simple challenge to provide game commentary that met in the middle between academic and journalistic writing and techniques, and that got the word out to a larger public than we can normally accomplish through academic publishing alone. The FPS editors turned it into much more than that.

I look forward to next year, as we move forward on our goal of sustaining that middle ground between academe and journalism, and as we move closer to our goal of reaching out to the game development community and striving to make an impact with the future of game design in many fields: entertainment, health, education, civic engagement, and more. Trust me, folks, we’ve only just begun.

It’s been a great year for FPS so it’s tough to pick only a few highlights. Katherine Cross’ article on gamergate is definitely a standout and one of the best we’ve ever published. It’s meticulously researched and masterfully constructed. Behind the scenes, I’m very happy that so many brilliant people have become editors this year. They’ve already made FPS a better publication and I’m looking forward to seeing where they take us.

The interviews this year have also been fantastic. I really enjoyed my chat with Soha Kareem, and Meghan’s conversations with Christine Love and Merritt Kopas were great. It’s a lot of fun to pick the brains of people whose work you admire. More than anything I’m happy about how the site is growing, not only in terms of numbers but in terms of the quality of content we’re publishing. So in the coming year I’d just like to see FPS keep growing and branching out. We’ll run another game-jam of sorts, maybe finally start up our critical Let’s Play series. But I’m mostly just looking forward to reading more essays and working with great people.

There has been much to be proud of as an editor of FPS over the last two years. Most recently, one highlight was our publishing of Katherine Cross’s fantastic article on “GamerGate.” I think FPS and middle-state publishing is most effective when its reaching outside of the relatively limited scope of academia, attempting to reach a broader audience and speak to current, relative issues, not just for game studies but for culture in general.

For this next year, I’d really like to see us reach not only an audience of non-academics, but also writers working with games who are not necessarily associated with the academy. So many people play and think (and write on blogs) about games, and I’d like to think of FPS as a venue for anyone to article their thoughts on the current games ecology.

It has been amazing to be so involved with FPS and help shape the new directions it has taken as a publication over the past year. I loved working with all the authors in the commentaries section and helping them develop their ideas, pitches, and drafts into something bigger. It was especially exciting to help/watch Katherine’s Gamer Gate piece grow from a pitch to a full article and gain so much momentum, recognition, and influence within our community.

I can’t wait to see what falls on my desk in the coming year! I would really love to see more commentaries that look at people’s subjective experiences as players/gamers. How does your unique perspective and life experiences change/affect how you play games? I would also like to see more pieces that really interrogate big changes/trends in games as a medium much like Steve’s commentary about games attempting to realistically represent real-world systems.

I enjoyed watching First Person Scholar grow over these past two years. Some of my favourite humans, writers, scholars, and game makers have appeared on the site.

After that, I really don’t know what else I could hope for.

My birthday wishes for FPS: MOAR book reviews! Specifically, I’d love to see reviews that move beyond the traditional academic text for their subject. For example, we’ve hosted Emma Vossen’s review of the art book Hyrule Historia and there’s plans to review a series of game criticism web videos in the New Year. Basically, if it’s writing about writing about videogames, I want to see it.

I just joined FPS this fall, but it’s already been an amazing experience. I’m especially excited to get started on the critical Let’s Play series and looking forward to the conference next summer. But beyond the new, for this coming year and many to come, I hope FPS continues encouraging new voices and new perspectives in game studies.

Even though I have just started working with First Person Scholar, I already feel like I’m part of the family. I feel privileged to be able to work with so many dedicated and intelligent minds. I look forward to starting the FPS academic Let’s Play series in the new year in hopes of delivering collaborative games research in an exciting, accessible format.