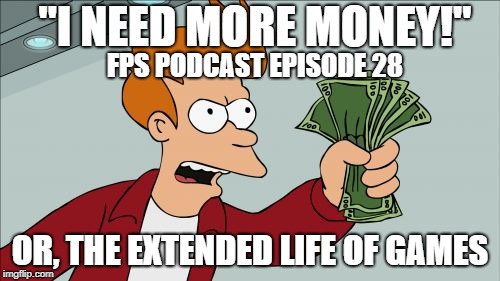 In this month’s podcast, Pierson, Rob, Betsy and Will discuss the trend towards “games as services” rather than one-off products. They also consider whether there is an increasing tendency towards specialized consumption of specific games. If we are playing a smaller number of games for longer periods of time, are these new developments in game consumption habits? How might changes in making, selling and distributing games be involved in the reasons we are playing specific games longer?

Exploring the changing ecosystem of game consumption habits, Daniel Cook points out that sustained engagement with a single game is typical of the history of traditional game-playing, particularly in sports, where players are encouraged by socio-cultural factors to specialize in one game that they become especially adept at playing. (Everyone knows the early scene in Space Jam where Michael Jordan is excoriated in the mainstream sports press for switching from Basketball to Baseball — and who can forget that he is captured by Looney Tunes characters on a golf course to participate in an intergalactic basketball game against animated aliens; the moral: stick to one sport, kids!). Daniel Cook cites statistical data which suggests (to him at least) distinctions between players of “traditional games” (non-video game games) and digital games. Players of traditional games tend to specialize, he writes, while players of digital games consume.

Cook suggests that the distinction between a traditional and a digital gamer is a result of media consumption habits. In other words, the communities in which these games are discussed can contribute to gaming habits. The media scene for contemporary digital video games favours novelty in the form of new products and new technologies for play. Content produced about games is increasingly adjusting towards these developments in game specialization. For example, some game review publications revisit older titles with sustained user bases to reconsider their original assessment of the game.

Whether this change in games from product to service corresponds to larger historical epistemic traditions or is merely reflective of the types of games the FPS crew have been playing and tracking recently, further research is needed. Cook, however, claimed as early as 2013 that these changes were here to stay:

This shift to services is accelerating, driven by business factors and steady player acceptance. Developers are slowly coming around to the realization that an evergreen service yields more money, greater stability and a more engaged player base. Experiments of the past few years with social, mobile and Steam games suggest that microtransactions will likely become a majority of the gaming market.

Nor does the trend seem isolated to video games. The podcast also reflects on some of the changes that have occurred within tabletop and card-based games. In fact, Pierson has previously written and podcasted on extended gameplay for FPS, especially within the context of Living Card Games (LCG).

While more people are playing the same games for a longer duration, game designers are eager to supply content to keep people playing — and paying. That game companies would be eager to capitalize on this specialized commitment to a particular game, particularly if players must pay for the privilege to continue to do so is hardly surprising. To me the important question is the degree to which these approaches to game design determine the types of games that get made and the types of gameplay to which they cater. Sebastian Deterding claims that consumer habits have a great deal of impact on the types of games that get made. He claims that “economic conditions affect the aesthetic form of games” at macro and micro scales, both “concrete design decision of individual games” and even the types of games that get produced. The increasing sophistication of data analytics has enabled and perhaps even mandated design decisions across multiple game sectors to varying degrees.

Freemium social games, for example, have impacted considerations of the development of games and game design practices across diverse developer teams, from the AAA to the indie studios. As Deterding puts this tangled relationship: “Modes of financing, production, and distribution can not just directly affect design choices for an individual game, but indirectly determine the possibility space of what games are made, and what kinds and degrees of aesthetic innovation/diversity versus continuity/homogeneity are pursued.” Beyond platform specific games, games are increasingly becoming specific platforms onto themselves: treated as a base upon which new modules for play and content are added.

Serialization offers new means of connection between players and designers. Persistent digital updates and multimedia convergences have allowed games to expand beyond their physical containers. This change in game production has further led to a collapsing of difference between serialization and seasonalization, and an increased terminological ambiguity. How should scholars and players best sort out the maze of terminological and ludological considerations involved in distinguishing between, for example, Destiny, Destiny‘s expansions, Destiny sequels, and the platform-specific thresholds (subscriptions, season passes, DLC packs) that separate players, content, mechanics, and, by extension, their online communities?

Changes in production and consumption have also led to changes in the communities that can participate even in a single game. In the case of online first-person shooters or massively multiplayer online role-playing games, this service-based approach can lead to tiered player categories (which can further be divided according to player skill), while this money can then be re-invested by developers into making incremental (and sometimes drastic) changes in the game world that further segments the community. As someone who only ever played Destiny without DLC or a season pass, I always felt as if I was playing a different game from the rest of the Destiny players, and in a separate community. I’m curious to see what happens with Warcraft game culture when the World of Warcraft vanilla servers are released.

Changes in the way games are designed, and the types of players for whom they are designed, has offered a critical site at which to discuss both the question of gamer identity and the function of games in constructing identity. Cook notes that this specialized commitment to a particular game is related to the development of communities and identities organized around the game. There is a distinction with a great deal of difference between someone who considers herself to be a fan of FPS games compared to someone who declares herself a ten-year Counter-Strike veteran. Cook further distinguishes between casual players and “media-centric gamers” as mutually exclusive consumers.

In Cook’s view, the idea that “somehow new players will get hooked on one game and then transfer over to consuming other games” is a fantasy because it does not account for how these players have positioned games and gameplay in their lives. Hobbyists, for instance, are not likely to become media consumers. As it seems to me, the changes in games from products to services (which Cook himself goes to great lengths to show) implies a need for a fluid and intersectional understanding of what gamers are and what the term gamers can become through the ecology of games. Gamer identity cannot be reduced to so narrow a range of criteria. If we are to encourage “freedom of play”, “mutual respect” and “willingness to explain”, all attributes Cook hopes to see in future game communities, it behooves game designers, publishers and the complex of game-related media services to makes games, not behavioural questionnaires. When players and game designers continually return to certain games, they can expand more than value and replayability. The shift towards games as service rather than games as one-off product offers an opportunity for games to evolve into more inclusive systems, cultivating new players, new playstyles, and expanding game communities in the process.

A quick survey of player statistics on Steam would suggest that players are willing to play specific games for a long time. The diversification of content available on online marketplaces suggests that game developers are increasingly seeking to tease out the lifespan of their games. Indeed, the changes to the format of online storefronts is indicative of this trend. I can still remember a time before “Add-Ons” was a tier on the PlayStation Store Network (PSN). (In contrast, Nintendo and Microsoft do not yet offer “Add-Ons” as a separate shopping category on their digital storefronts.) This complex feedback and feedforward of informational exchange between players, designers, and critics emphasize the need for game scholars to remain observant to the role of economic systems in the production of games, game cultures, and gamer identities.

Games mentioned in the podcast

Kafai, Yasmin B., et al. Beyond Barbie and Mortal Kombat: New perspectives on gender and gaming. The MIT Press, 2008.