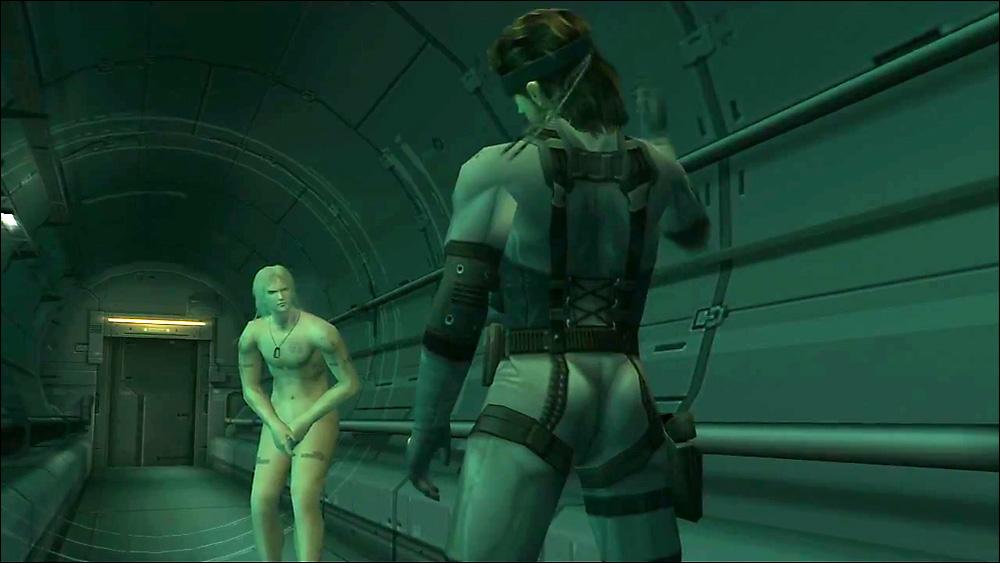 What makes a stealth action game? Among the titles discussed in this podcast, including (and predominantly) the Metal Gear Solid series, Assassin’s Creed, Hitman, Splinter Cell, Batman: Arkham Asylum and, to some extent, Horizon Zero Dawn, a distinction was placed between stealth as a procedural mechanic baked into all aspects of the game design and stealth as an additional option afforded to players.

For some players, this distinction between stealth action games and action games with stealth elements manifests a strict delineation in playstyles. Chris described “a weird disconnect in [his] playstyles”; for instance: in games that offer stealth, he’ll choose anything but, and in stealth action games, he’ll restart the level mercilessly, as “a mechanical obsession”, until he’s achieved a stealthy playthrough. The difference goes beyond the mechanical and suggests perhaps why stealth missions rarely succeed when transposed to action games. Stealth games are predicated on players interpreting and navigating environments rather than players combating environments, or, more typically, combating the enemies with the environments as an aesthetic playground. Stealth games, Pierson suggests, “tend to present danger as a puzzle to be solved with forethought and planning”, by privileging strategy and planning. Players are encouraged to engage with systems rather than weapons to achieve their goals: a distinction between reactive action games (shoot the intruders on your screen!) and premedidative experience (do whatever it takes so that you don’t have to shoot people).

Objectives of stealth action games typically signal alternative modes of play. In their book Metagaming, Stephanie Boluk and Patrick Lemieux argue that metagaming is the very act of play: “From the most complex house rules, arcade cultures, competitive tournaments, and virtual economies to the simple decision to press start, pass the controller, use a player’s guide, or even purchase a game in the first place, for all intents and purposes metagames are the only kind of games that we play” (3). A stealth action game seems especially adept at cultivating metagaming by suggesting and rewarding play. Boluk and Lemieux further describe metagaming as tactical tools of intervention in complex systems. I would argue that queer game theorists are seizing on this potential as a means of speculating alternative play practices and game systems. In Queer Game Studies, for example, Edmond Chang draws on Alexander Galloway’s theory of countergaming to suggest expanded horizons of play, which he calls queergaming. Chang’s queergaming describes an alternative gaming logic that eschews aggressive and competitive logics that pit players against others and the environments. Perhaps part of the reason why stealth games are appealing is that they offer an opportunity to play queerly. I won’t even discuss all the times I hid Solid Snake in a closet to escape detection.

Increasingly, however, stealth games offer game mechanics that afford greater choices for killing through larger, more bombastic arsenals. Players are asked to engage with instruments of killing moreso than the environment of the game. The linear narrative of the first Metal Gear Solid meant that your arsenal subsisted of whatever you found along the way. The latest Metal Gear allows players to airdrop tanks, and offers a weapon loadout screen between levels. Will remembers the Syphon Filter games dropping the player into labyrinthine levels with two sticks of chewing gum and the determination to win. In a sense, these game mechanics ask players to rethink the typical tropes of action video games to win. That said, recent games have also incentivized queergaming by rewarding players for precisely the kinds of values Chang emphasizes–i.e. modelling compassion and thoughtfulness for other players, characters and environments. You can kill everyone in the level and win, but the game’s reward system prescribes and invites alternatives.

Associated with the increase in implements for killing has been an increasing sophistication of stealth vision tools. The first two Metal Gear Solid games offered a crude radar screen for surveilling enemy movements (perhaps a nostalgic remediation of the earliest isometric Wolfenstein game on the Apple II). Metal Gear Solid 3: Snake Eater limited the radar function, and tasked players to rely on the environment of the avatar rather than its digitized representation as a surveillance grid. It also expanded the range of tools and systems to facilitate killing targets.

The expansion of non-stealth options has also been met by an increasing potential for strategic and stealthy planning in games. By the time of the fifth Metal Gear Solid, the stealth vision mechanics were upgraded to the level of augmented reality tools that allow players to tag and track enemy positions and movement patterns on-screen. A similar trend has been followed in the Assassin’s Creed series, with the addition of cover sites designated on-screen. With each new Assassin’s Creed, developers herald new crowd mechanics and tools for managing them in the gaming press. The Hitman series has traced a similar development in crowd management, with every level designed around disguise and blending into the environment (including its populace). Comparing the first Hitman game with the latest exemplifies the progression in game mechanics towards managing crowds in terms of what Chris defines as another form of resource management. Strategic engagement with bystanders in the game rewards players’ interpretation of game assets as precisely that–resources to exploit through play.

In “Games Studies meets Surveillance Studies at the Edge of Digital Culture”, Whitson and Simon suggest that to play games is to play through systematic surveilling (of others players, NPCs, objects, locations, etc) in ways that provoke associations with Boluk and Lemieux’s theory of metagaming. To play a game is to anticipate future outcomes. Success in chess is largely determined by anticipating the moves the other player will make; in Space Invaders, the only way to win is to anticipate the precise moment at which to press a button so your laser will connect with the last scrolling ship. Recall Emperor Lurrr’s chastisement to Fry in an Atari-themed episode of Futurama: “Instead of shooting at where I was you should have shot at where I was going to be!” Anticipation and expectation of success represent player investment in the game. The actions could even be labelled fun.

Metal Gear Solid games are as much about staying out of enemy sightlines (figured as gradient cones of vision on the radar screen) as they are getting enemies in your sights to neutralize their gaze. Towards the end of the podcast, the participants explore the significance of this trope in greater detail to offer a fascinating observation about the war of male and female gazes in Metal Gear Solid.

The concept of the gaze comes from Laura Mulvey’s seminal articulation of the ‘male gaze’ as a means of asserting scopophilic power in cinematic representation. More than simply looking, gazing constructs libidinal objects to be desired and visually consumed. Who gets to look, what they get to look at and how this control is constructed, construed and constrained subtends the logics of gazing and being gazed at in the language of cinema. Importantly, the gaze is a tool of domination that can be wielded by any subject conferred power through control of media technologies. Whereas the cinematic image is framed (and constrained) by the filmmakers (ostensibly, though not exclusively, the director), with stealth games the logic of gazing is ceded primarily to the player. Power falls to players to construct the frame using the controller, except in cases where cinematic convention subverts this potential. The Metal Gear Solid series is renowned for its lengthy cinematic cut-scenes, controlled and coordinated by the obsequious gaze of Hideo-san as director, creator, and co-player instructing the gaze Ludovico-style. Look here, see this, examine, scrutinize, now play. (Perhaps unsurprisingly, Hideo-san’s rigid control over game development has been a notable impetus behind his very public divorce from Konami and in cultivating his auteur status in mainstream game culture).

The threat of the female in these scenarios typifies the Freudian fear of castration, a symbolic dismemberment that the games in this genre circumvent through a technological re-embodiment. These masculine daydreams of disembodiment (through pseudo-scientific technological prosthetics) proselytize a messy posthuman rhetoric moored to representations of female bodies that are murky at best.

In preparing for the podcast, Jennifer Whitson jokingly asked the participants whether the Metal Gear Solid franchise is “a creepy lurker simulator”. Whitson’s question was less about the problematics of gendered representation in the series, and aimed more towards this ambiguous play of omniscience and power in the games. As Pierson points out in the podcast, “Surveillance dwells at the heart of these games”, which Betsy clarifies as “being able to see without being seen”. The participants all discussed issues related to surveillance as a power fantasy involving varieties of planning, organizing and navigating the game environment.

In more recent stealth action games, the player approximates the entire apparatus of drones in the American military industrial complex. Procedural mechanics in stealth games cultivate a discriminatory logic of targeting, surveilling and neutralizing. Military rhetoric cloaks militaristic activity and works to neutralize the hegemonic discourses undergirding this genre. For one, the pseudo-fictional surveillance technologies in these games afford the magical ability to determine whom to investigate, interrogate and kill. The player might have any means at their disposal to achieve that objective, but rarely can they choose to disobey the final objective, even in cases where the player is asked to kill. (In Metal Gear Solid 5, for example, to preserve his high score, Will explains that rather than kill any targets, he airlifts them to the base where they are presumably killed off-screen.) The conventions of the gaze ellide problematic ethical considerations, and the mechanics offer a moral absolution to the player never afforded to the military personel piloting the drones, the intelligence officers supplying the data to populate those eagle eyes, or the general public who benefit from the freedom’s secured through technologically abstracted violence. In some sense then, stealth action games offer unambiguous ethics of drone warfare, predicated on clear-cut objectives and, most importantly, a chance to restart when shit goes wrong and the collateral damage starts to pile up.

The tension in these games is in part provoked by the tension between the character and the technologies of surveillance which assist (and perhaps even facilitate) the espionage. Playing the first Metal Gear Solid, for instance, I’m constantly struggling with the controls. I see the avatar of a guard approaching in my radar. I push one button to leap, Solid Snake performs a roll and lands in a crouch. I move my control stick forward to escape the approaching guard, Solid Snake prones on his stomach and begins to crawl. The guard is alarmed, either by my presence or my antics, and I struggle to land a punch. Now he’s shooting me. I try to return fire, but aiming my gun is a pathetic show of my coolness under pressure. I am impotent to properly control my avatar. In my frustration, I think what a lot of good that radar did me. Snake? …. Ssnnnaaaaaake?!?!?! I have countless other frustrations with the Assassin’s Creed series, fumbling my way up buildings and dropping to my death because of a mistapped button. The Internet abounds with compilations and memes of similar mishaps from the Assassin’s Creed series. More problematic are the missions you fail because you left the limited surveillance radius of your target or ventured too close to the target’s 360 degree peripheral vision, even in instances when there could be no human way for them to detect your presence. Is it possible your adversaries are equipped with their own enhanced sensors? That would certainly trouble the player’s privileged position as the omniscient surveiller.