Bradley Markle is a graduate student pursuing his PhD in English Literature and Criticism at the Indiana University of Pennsylvania. His research includes African American literature, Caribbean literature, performativity and digital humanities studies.  Currently he is exploring how technology can be better implemented in the classroom to improve pedagogical systems.

Famed German board-game designer Wolfgang Kramer suggests in his essay “What is a Game?” that a game, video or otherwise, “always has components or rules.” He goes on to say that “[t]he components are the hardware, the rules are the software. Both define the game. Both can exist independently from each other, but separately are not a game.” If we accept Kramer’s thesis, then the need for further discourse as it pertains to the physical devices – i.e. the components used to play a video game – becomes apparent.

A number of scholars – including Daniel Johnston (2015), and Katherine Isbister (2016) – have investigated mimetic controls and their effects on player experience. Ian Bogost and Nick Montfort (2009) have examined the physical implications of an entire console (the Atari 2600), and Anna Anthropy (2012), Paul Skalski et al. (2010), and Daniel Johnston (2015) have all examined the design of controllers and how a player’s agency is manifested on a screen. Without diminishing the importance of the works listed above, these studies have thus far only been concerned with the physical possibilities of controllers and systems and how they afford or constrain player interactivity, agency, and even game design. This paper, however, seeks to direct critical attention to the rhetorical possibilities afforded by a physical controller and to offer a neologism to describe such possibility: haptic narrative. The essay will begin by establishing a theoretical framework within which haptic narrative/rhetorical possibilities can function, specifically that of Viktor Shklovsky’s “defamiliarization.” The paper will then go on to define precisely what constitutes haptic narrative and offer a concrete example of its usage in the 2011 game, Brothers: A Tale of Two Sons. Finally, I will offer some concluding remarks regarding the technique’s importance to critical video games scholarship.

In 1965, Viktor Shklovsky composed his essay “Art as Technique” which, among other ideas, introduced the concept of “habitualization” – that is, human beings who perform an action or see an object often enough will become accustomed to it and no longer think about what it is, what they are doing, or how a thing looks or sounds. Critical art, then, functions by forcing a person to stop and pay attention to something because it is unfamiliar. This “defamiliarization,” Shklovsky argues, can be achieved a number of ways, but primarily through purposefully making something difficult to comprehend (9).

Shklovsky’s theory can explain why and how components often disappear from the discourse of video games: because controllers are designed to be comfortable, easily navigable, and intuitive, they disappear from the consciousness of the player. Indeed, it is often taboo for a game to even draw attention to the controller. If a player has difficulty translating their agency into a game, it is usually thought of as an implication of bad game design, as suggested by Daniel Johnson in his article, “Animated Frustration or the Ambivalence of Player Agency” (2015). Thus, the game controller or the keyboard that a player physically manipulates “disappears,” both from the consciousness of the average player as well as that of the game critic.

Input devices – whether a touch screen phone, multi-button controller, keyboard and mouse, or joystick – are intended to convey a player’s choice and agency to the logic of a game’s internal systems. Because of this, the opportunity arises for a game to draw attention to the way in which agency is being expressed, exposing the apparent disappearance of the controller and “baring the device.” By doing so, it is possible for a game to reveal thematic and storytelling elements to the player independent of whatever diegetic elements are being conveyed on screen. For example, by making input unresponsive or non-intuitive, a game can convey confusion or frustration. By requiring input to be repetitive, themes of pointlessness, ennui, or even physical exhaustion can be evoked. There are endless possibilities, but the result is that a player can explore a game’s narrative and themes through explicit, conscious physical interaction with the controller. Such input-driven rhetoric might best be summarized in the term ‘haptic narrative’: haptic feedback used in a meaningful way to explore themes or narrative threads of a video game.

Brothers: A Tale of Two Sons – A Haptic Narrative

Rather than using arbitrary, theoretical examples of how haptic narrative could be used to explore a game’s story, it is more useful to explore how certain contemporary games  successfully employ this rhetoric. One such game, Brothers: A Tale of Two Sons, was published in 2013 by 505 Games. Though the game can be played via keyboard, this analysis is conducted with the assumption that a player is using a game controller, e.g., that of the Xbox 360 or PS4.

Brothers’ story is ultimately one that explores companionship, trust, loss and personal grief directly through the employment of an unusual control scheme: the player controls one brother independently with each thumb. The younger brother is controlled by the left thumb, the elder by the right thumb. The game is highly disorienting, particularly to new players, because both brothers navigate the world simultaneously, moving in different directions at the same time on the same screen. As the player begins to become acclimated to the setup however, the brothers’ interactions become increasingly smoother – reflected in the story as the brothers’ bond grows stronger over the course of their journey. In this way, the degree to which a player can manage to make their thumbs cooperate reflects a central theme of the story: fraternal bonding. 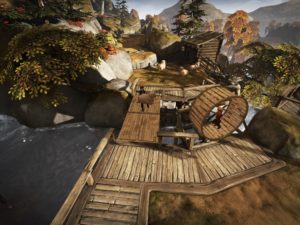 Brothers begins by depicting the death of the titular characters’ mother by drowning – an incident witnessed by the younger of the two brothers (both brothers remain nameless throughout the game). The player then learns that their father is deathly ill and the only hope of saving him is for the pair to travel to the end of the world to gather the sap from (presumably) the tree of life and return home. It is through this epic quest that the player develops haptic literacy of the difficult control scheme and the skill necessary to complete the quest. An emotional shock comes when, towards the game’s conclusion, the older brother dies. Not only does the player feel the emotional heartbreak created diegetically, but his or her hands also feel the loss. The player has invested hours into mastering the systems of the game, trying to get their thumbs to cooperate and work together like two unruly brothers. When the second thumbstick is no longer needed, the player feels the younger brother’s loss, and a sort of ‘phantom thumb stick’ emerges; the player is made keenly aware of the fact that they no longer need to use the second stick.

The most potent example of haptic narrative however, comes at the conclusion of Brothers’ story. Throughout the entire game, the younger brother has relied on his elder brother to ferry him across water – he is deathly afraid of water after witnessing his mother’s drowning. When he arrives home however, his path back to his father is blocked by a final body of water. If the player tries to swim across the water, the response is the same as it has always been throughout the game: the younger brother walks to the water’s edge, shakes his head, and refuses to swim across. It is only by using the now-phantom thumbstick – by channeling the spirit of the now-deceased older brother – that the younger brother gathers the courage to finally swim across the stream and complete his quest. Brothers literally tells the story of the younger brother’s courage and acceptance of his older brother’s death through the controller. The key difference between this form of storytelling and a more traditional take on game narrative is that unless a person actually plays this particular portion of the game – i.e. picks up the controller and presses the thumbsticks – they will never know the story being conveyed. There is nothing diegetic, nothing conveyed onscreen or through the speakers, about the younger brother’s coming to terms with the death or how he manages to channel the courage to swim through the water. It is only through haptic narrative that this idea is conveyed. 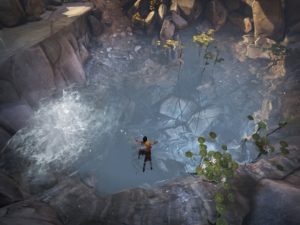 Brothers, by employing Shklovsky’s defamiliarization, creates part of its narrative by drawing attention to the oft-ignored haptic component of play. As critics and game players alike have become “habitualized” with the controller and, particularly as their own haptic literacy and skill grows, they become less attentive to the physical object that is manifesting their agency on the screen. Brothers forces the player to recognize that which has, in a sense, disappeared – the controller.

Defamiliarization is not the only theoretical framework through which haptic narrative can be analyzed, nor is Brothers the only game that successfully employs the technique to explore themes and narrative. Undertale (2015), Eternal Darkness: Sanity’s Requiem (2002), and Metal Gear Solid (1998) are among many others that employ the method to further various themes. These few are strong examples of haptic narrative being expressed in video games, but are also representative of an oft-neglected, yet important facet of game design. I argue that the discourse around video games criticism needs to account for, and increase the awareness of, the relationship between a game’s rules, the components, and the player – and how narrative themes can be expressed through all three. Though brief, this analysis demonstrates just some of the possibilities afforded by a closer study and broader discourse situated around video games’ components and haptic response-narrative. Finally, I feel as though this discourse will become a particularly salient area of study as technologies such as virtual and augmented reality games continue to be developed and grow in cultural popularity, precipitating a change in the human-to-component interaction that has hitherto dominated video game design and criticism.

Anthropy, A. (2012). Rise of the videogame zinesters: How freaks, normals, amateurs, artists, dreamers, dropouts, queers, housewives, and people like you are taking back an art form. New York: Seven Stories Press.