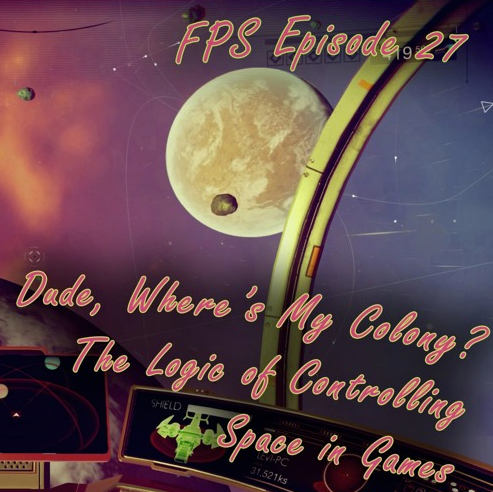 Jason Lajoie is a PhD candidate in English Language and Literature at the University of Waterloo. His work explores how gay identities are constructed and negotiated through media and technology, particularly in domains like online gaming and social media. He is Podcast Producer for First Person Scholar.

In this month’s podcast, Betsy Brey, Pierson Browne and Chris Lawrence discussed pervasive cultural anxieties that manifest in games set in outer space. Often, these anxieties produce logics of capitalist control. No Man’s Sky tasks players with collecting everything under the sky, nevermind whose exactly. Stellaris is about building and then managing the increasing size and complexity of one’s empire, while wrestling control of territory from other empires for galactic domination. When social interaction does occur in these games, it is directed by the logics of trade and acquisition. With their imperatives to colonize, harvest, and exploit, these sorts of games usually enjoin players to become despots. That said, there’s no denying how fun it can be to command and conquer; to paint the map in one’s chosen colour, to revel in the revealed dimensions of one’s burgeoning empire. Mel Brooks said it best: it’s good to be the king. Sometimes at least. This month, we talk about how recognizing these mechanics can offer ironic ways of engaging with and reading against them.

Indeed, game scholars have recognized the capacity for virtual worlds to syncretize diverse phenomena in games. In “Synthetic Worlds as Experimental Instruments”, for example, Edward Castronova et al. argue “that synthetic worlds would be very useful for social scientific experiments” (273, emphasis in original). Their thinking is that virtual worlds offer controlled environments for isolating phenomena to better observe them. For instance, virtual worlds offer the potential to simulate the interactions of macro-level social phenomena, like cooperation, competition and social aggression.

Reading out and away from their capacity to serve as digital petri dishes of social phenomena, video games have also been used to teach the historical progression of empires (see Chapman, 2010; Chapman, 2013) and even history more generally (Metzger & Paxton, 2016; Gilbert, 2017). The methodology underlying all of these approaches relies on critically thinking about the tools that grant and govern control in games — what we could categorize as their procedural rhetoric (Bogost, 2007).

Nor can we forget the role of narrative and story conventions in the development of these experiences. In the space games explored in this month’s podcast, the games can be distinguished by their focus on space opera or science fiction. As Chris explains in the podcast, the former is when a text makes use of a science fiction setting, while the latter relies upon a technological conceit. Think of it this way: Star Wars is brilliantly inventive with its use of technology but that technology is only decorative; the focus is not about how societies and cultures differ due to the affordances of hyperdrives, death stars, and lightsabers, which are instead narrative devices for character interaction. Science-fiction stories, on the other hand, are “thought experiments made stories”, as Pierson puts it, and this focus on the ‘what if?’ is where games reveal their potential as simulational experiences that stimulate. Games allow us to model from the ‘what if’ to the ‘what then?’ at an unparalleled scale.

In short, all games are persuasive. They persuade their players towards different ends determined by the logics that govern their simulation. As players, we should be attentive to the pervasive imperative in games that impel us towards subjugation and domination, while as scholars we should consider the persuasive means of these systems and how they progress towards persuasive ends. Space games can offer experiences beyond their current focus on domination and despotism; these games offer tools for thinking beyond the conditions of our current social, political and economic regimes, to go from the ‘what if’ to the ‘what then’, and to re-imagine what’s next for us as players and as a species.

Games Mentioned in This Month’s Podcast