Dr. Jess Morrissette is a professor of political science at Marshall University, where he studies the politics of popular culture.

I was ten hours into playing Fallout 76 when it finally happened—a moment I had warily anticipated since I first learned the latest installment in the franchise would be set in West Virginia.  My character, the self-styled Shotgun Nurse of the Wasteland, was descending into a coal mine.  It was the final step in my character’s training before officially joining the Fire Breathers, a group of post-apocalyptic firefighters headquartered in the crumbling remains of the Charleston Fire Department.  All that was left was to activate an emergency beacon located in the sulphurous depths of Belching Betty, the site of a subterranean mine fire that had raged for untold years.  After bravely navigating the flames, toxic air, and Scorched ghouls inhabiting the mine, my character pushed past the bodies of several failed applicants to activate the beacon and complete the quest. 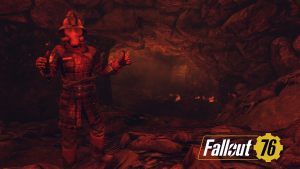 Belching Betty is one of several abandoned coal mines dotting the sooty Ash Heap region of Fallout 76’s Appalachian landscape.  These remnants of the once-vibrant coal mining industry are familiar to anyone who has spent significant time in the actual West Virginia.  In fact, as recently as 2017, the West Virginia Department of Environmental Protection spent millions of dollars extinguishing a mine fire that burned for several years under the tiny town of Newburg, West Virginia.

“Come listen, you fellers, so young and so fine, and seek not your fortune in the dark, dreary mine,” warns the voice of Tennessee Ernie Ford in “Dark as a Dungeon,” a 1955 cover of a Merle Travis ballad that plays as part of the rotation on Fallout 76’s in-game radio station.  While the central storyline in Fallout 76 follows the footsteps of Vault 76’s Overseer through West Virginia and eventually culminates in a race to commandeer Appalachia’s nuclear silos, a secondary narrative unfolds in the background.  Through a combination of side quests, discovered notes, holotapes, and the franchise’s signature environmental storytelling, Fallout 76 engages in a surprisingly nuanced exploration of the coal mining industry, automation, labor rights, and unionization in the game’s fictionalized version of Appalachia.  As a child of Appalachia and the son of a coal miner myself, I gravitated toward these themes and found myself caught up in a narrative about a state not unlike my own, where coal was once king.

While I live and teach in West Virginia today, I was born across the border in Virginia.  More precisely, I grew up in the mountains of Southwest Virginia, home to the state’s coalfields.  In my hometown of Castlewood, many families relied on coal mining—and related industries like the railroad—to support themselves, and mine was no exception.  After returning from military service in the early 1970s, my father, like so many others, took a well-paying job in the coal mines.  He spent the next three decades digging coal, providing the basis for a middle-class upbringing in a deeply impoverished region of the state.  Some of my earliest memories of my father involve him coming home after an overnight shift, covered in coal dust, and bringing me small plastic jugs of water distributed to the workers at his mine (at a time when bottled water was still a novelty).  I went into the mine with him once.  I was nine or ten years old, and the mine was shut down for the winter holidays.  I never wanted to go back.

Even growing up with coal mining as such a prominent fixture in my life, I was nevertheless surprised to see Fallout 76 thoughtfully engage with the legacy of the mining industry in Appalachia.  When Bethesda announced the game’s setting in May 2018, it made sense that mines would appear.  Coal mining, after all, has been central not only to West Virginia’s economy, but also its identity as a state for well over a century.  That said, I assumed the mines in Fallout 76 would serve as little more than a dungeon backdrop, no different than a cavern where an evil necromancer might hole up in a game like Skyrim. 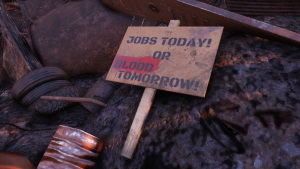 I first realized Fallout 76 was going to critically reflect the history of the coal industry in Appalachia when, during my travels through the wasteland, I stumbled across what appeared to be the site of a long-ago battle.  Scattered around the scene were protest signs with slogans like “Jobs Today or Blood Tomorrow,” “Man Before Machine,” and “Workers United Against Automation.”  These were, I discovered, the relics of a battle waged before the Great War between disenfranchised miners and the coal companies attempting to replace them with the latest technological breakthroughs.  In turn, Fallout 76 mirrors real-world clashes over automation in the mining industry (and any number of other industries), only the perceived threat here is not a more efficient roof bolting machine, but rather an atomic-powered mining robot.

November (2013) describes the setting of the Fallout series as a “painstakingly rendered and deeply satirical depiction of a post-apocalyptic wasteland littered with the detritus of an Atomic Age civilization that, unlike our own, realized the techno-utopian visions of the future introduced to mid-twentieth-century Americans by popular science fiction and futurist public exhibitions” (p. 297).  He goes on to highlight how this setting “shows the ways in which Americans struggled to reconcile their desire to create new possibilities through the development of new technologies and their concern that the process of pursuing such technologies would erode civil liberties and indeed American values” (November, 2013, p. 298). Similarly, McClancy (2018) argues that quests in the Fallout series “emphasize the potential dangers that technology presents in the real world by exploring the damage it causes within the simulacrum.”

The workers’ struggle against automation depicted in Fallout 76 speaks directly to this tension between progress defined in terms of technological advancement and its attendant human costs.  Notes and holotapes scattered around the game add a folkloric element, describing a public “man versus machine” competition between the robotic Auto-Miner and a human worker wearing an advanced suit of Excavator power armor.  Fallout 76, however, subverts our expectations; the Excavator suit fails and the human miner loses the race.  John Henry is a beloved West Virginia folk hero, but in Fallout 76’s echo of his tale, the machine emerges triumphant.

Labor organization and violence figure prominently in the history of the coal mining industry in Appalachia, and so too do they enter into Fallout 76’s narrative.  As part of the game’s main storyline, and for reasons too convoluted to explain, the player is tasked with enlisting in the Army.  First, however, the player must complete Patriotism Training.  Drawing on the franchise’s trademark satirical Cold War nostalgia, this involves investigating the staged bedrooms of three young boys to determine which one is secretly a “Commie sympathizer.”  In turn, the “proof” necessary to expose the subversive youngster involves discovering a journal entry in which one of the boys complains about the poor conditions in the mine where his father works and suggests, “Today I’m going to call up my friends and we’re going to get our pops to all take the day off! Together!  And maybe the day after that!  And maybe the day after that too!  … We’re going to organize a strike!”  Clearly, no real American could write such a thing.

The Ash Heap region in Fallout 76 is scarred by the remnants of numerous clashes between workers and mine bosses, reminiscent of West Virginia’s own coal wars in the early twentieth century.  Most famous among these real-world conflicts is the 1921 Battle of Blair Mountain, in which President Warren G. Harding deployed the U.S. Army—accompanied by air support—to disperse a group of approximately 10,000 striking coal miners.  Blair Mountain appears in Fallout 76, renamed Mount Blair.  Marked by a colossal bucket-wheel excavator, visible to players at a significant virtual distance, the Mount Blair of Fallout 76 is emblematic of contemporary real-world surface mining techniques that have transformed the fictional Ash Heap into little more than a smoldering hellscape.

Of course, battles between miners and mining companies in Appalachia didn’t end in the 1920s.  In 1989, Pittston Coal Company cut health care benefits for its workers in Southwest Virginia, and the United Mine Workers of America (UMWA) responded by declaring a strike that would last for nearly a year and bring national attention to the region.  While the UMWA urged the camouflage-clad strikers to engage in peaceful protests and work stoppages, incidents of violence nevertheless occurred.  Most notably, jack rocks—crude caltrops fashioned from nails—were scattered on roads in the area with the intent of damaging the tires of coal company trucks and scab workers alike.  I still remember my sixth grade teacher bringing a jack rock to class and warning us, if we ever found one ourselves, not to pick it up. 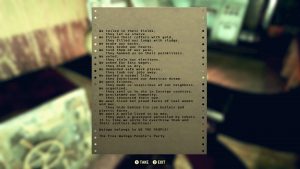 The politics of Fallout 76 are perhaps nowhere more evident than in the case of the Free Watoga People’s Party, an anti-automation movement encountered during a late-game side quest.  As the group’s founder describes the group in a message to his compatriots, “Free, as in freedom. Who doesn’t want more of that? And people, because it’s time we the people actually take a stand against all these damn robots taking over everything. And party, like we’re a legit force, and we know how to organize.”  Players can also uncover a manifesto for the Free Watoga People’s Party, written as a series of call-and-response stanzas: “We asked for fair wages/they bled us dry. We demanded safe workplaces/they took our jobs away. We wanted a normal life/they foreclosed our American dream.”

As I descended into Belching Betty during those early hours of Fallout 76 to complete my training as a Fire Breather, I couldn’t help but reflect on the coal mining industry’s impact in my own life.  Coal mining provided with me a comfortable upbringing.  It paid for my first computer when I was nine years old and eventually helped send me to college.  But, of course, it all came with a price.  My father was forced into early retirement due to a knee injury after a rock crushed his leg in the mines.  Then, a few years ago, he was diagnosed with complicated black lung.  Decades of coal dust inhalation led to fibrosis of the lungs, essentially scarring down the tissue necessary for proper respiration.  Despite being in the advanced stages of black lung, my father—thanks in large part to pulmonary therapy and physical exercise—is doing quite well.  Nevertheless, black lung remains incurable and irreversible; barring unforeseen circumstances, it will be a terminal diagnosis.  Obviously, this is to say nothing of the wider legacies of the dwindling coal industry in Appalachia today: an impoverished region, beset by unemployment and opioid addiction, battling a creeping environmental crisis and, through the perseverance of its proud people, refusing to succumb to hopelessness and desperation.

Two months after Fallout 76’s release, the story surrounding the game has overshadowed its actual narrative.  A buggy launch was followed by widespread questions about everything from design choices to microtransactions to the packaging of promotional power armor helmets, distracting from the stories Fallout 76 actually set out to tell.  Amidst the “worst AAA launch ever” discourse, the Charleston Gazette-Mail published an editorial on December 10, 2018, framing West Virginia as the “victim of yet another outside industry” due to Bethesda’s perceived mishandling of the game.  Perhaps it represents a “missed opportunity” as far as hopes of boosting tourism to the state, an industry to which West Virginia has increasingly turned in recent years.  What this perspective overlooks, however, is the fact that Fallout 76—against a retrofuturistic backdrop of nuclear bombs, underground bunkers, and super mutants—delivers a thoughtful narrative about coal mining that “does right” by West Virginia where so many other works of popular culture set in the state have failed.

‘Fallout’: WV victim of yet another outside industry. (2018, December 10). Charleston Gazette-Mail.