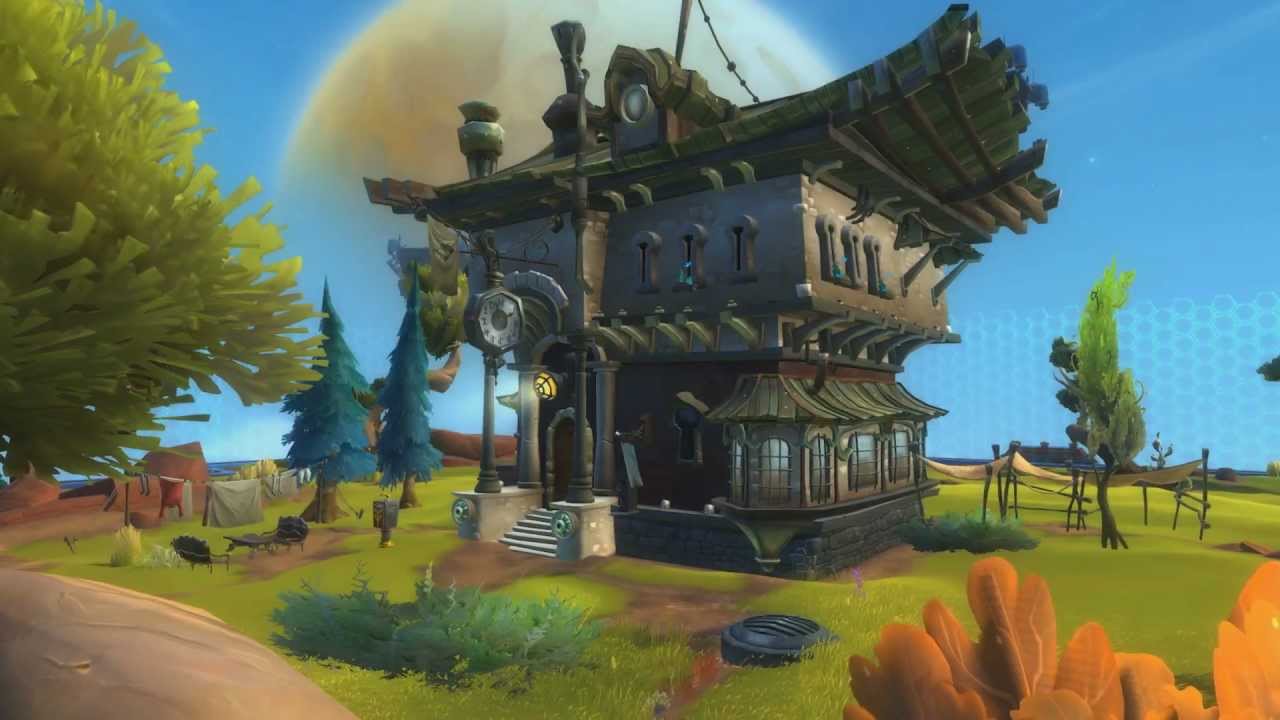 Matthew E. Perks is a PhD student at the University of Waterloo in the Department of Sociology & Legal Studies. His research focuses on the socio-economics of the video game industry and how these inform and alter the design decisions and identities of video game developers.

With the shutdown of massively multiplayer online roleplaying game WildStar (Carbine Studios, 2014), many players are reflecting on the lost potential of the game. The game offered an interesting combat system, unique and playful character design, and most strikingly a deep player housing system. Now past its foreclosure, I want to reflect on the importance of player housing, and other building systems in games, that allow for players to create space and community within game worlds. Few games offer players the opportunity to impact their world in meaningful, creative, and unique ways, often instead having players move through expansive open-worlds or along a set narrative path. While players may see consequences to their actions reflected in these games, they are ultimately pre-determined by developers. Player housing offers players a space within the game world – and dependent on the depth of these systems – may afford players the opportunity to truly create unique and creative spaces. I emphasize the importance of this opportunity to create space through my own experiences in player housing systems – from WildStar to Star Wars Galaxies to The Sims series. The creation, and potential queering or diversifying of these spaces, may afford players opportunities, capacity, and expression not available to them in other ways.

My brief and incomplete history of player housing in games

My first interaction with creating my own space was likely similar to many others who had the privilege of a desktop PC at home. The Sims (Maxis, 2000) offered players the opportunity to build up entire lives, creating spaces and building narratives around these digital families, bachelors, and bachelorettes. Now a multi-game franchise, The Sims allowed me to do two things that I could not at that stage of my life: pursue romantic relationships with boys and decorate and organize my own space. While many of these types of gameplay activities happened in secret, on save files that I didn’t share with friends and vague explanations of how the game worked to parents, it subsequently led me to search out games with similar affordances. In 2002, Maxis introduced their short-lived massively multiplayer game The Sims Online. Similar to other online games I played it centered around users designing, creating, and sharing space in online worlds. Other games with similar premises, such as Furcadia (Dragon’s Eye Productions, 1996) or Habbo Hotel (Sulake, 2000), centered my experience online around creating the queer space that I felt comfortable in but did not have access to at the time.

Unique to The Sims Online, all spaces in the game were created and operated by players and there was a variety of spaces to choose from depending on your goals. The main activity in The Sims Online was raising the skills of your Sim, which was faster if you did it in a shared space with others. Many lots then were devoted to specific skills (lots devoted to charisma would feature dozens of mirrors or chess boards for logic). The Sims who ran them curated their spaces and moderated them, all the while ‘hosting’ their visitors looking to raise their skills. Not requiring an immense amount of focus to raise your skills, much of players’ attention was devoted to socializing with one another, and lots themselves created communities around their spaces. There were many lots that were devoted to the charisma skill, but only a few would cater and encourage queer and inclusive communities in these spaces. While The Sims Online shut down in 2008, it fundamentally shaped my taste and experiences with online games.

This trend of seeking out player housing further continued into subsequent online games that I played. The inclusion of player housing became a major deciding factor of whether or not I would play many of these games and the presence of online communities centered around creation have led to incredibly deep friendships that remain to this day, over a decade later in some cases. A major milestone along this journey was Star Wars Galaxies (Sony Online Entertainment, 2003) which offered a massively multiplayer online experience of the Star Wars expanded universe occurring between Episode IV: A New Hope and Episode V: The Empire Strikes Back. Star Wars Galaxies offered the unique experience of being able to create not only individually-owned player houses, but also cooperatively create player-run and operated cities.

Unique to Star Wars Galaxies was also the depth of their player housing system, which offered the ability to move items along X, Y, and Z axes and featured a variety of unique homes, furniture items, and the ability to own several structures at once. I created dozens of spaces, from apartments to offices to dive bars to pop-up shops. I was so inherently devoted to player housing that I rarely engaged in any of the end-game content (unless it featured a piece of furniture as the reward, of course) and established a reputation for my decorating skills, earning myself in-game currency for decorating others’ homes. Unfortunately, Star Wars Galaxies shut down their servers in 2011.

Announced in 2014, WildStar loudly proclaimed it would feature a rich, deep, and rewarding public housing system for its players. Since the shutdown of Star Wars Galaxies I had not had access to a deep housing system and was itching to get back into what I considered a very important creative output for me. While there were certainly other games with player housing, many typically feature systems that simply allow you to place objects or pre-made sets into pre-designated areas within a room. WildStar delivered on its promise and I found myself once again part of communities devoted to creating large, intricate, and diverse spaces within these sandboxes.

How I queered my digital spaces

Across all of these games I made deliberate decisions to queer the spaces that I created. I want to talk about how I queered these spaces, why I did this, and why even if this queering is subtle in nature, is still very important. When we think of queer spaces in the real world, we likely think of the various gay villages in major metropolitan cities and the clubs, cabarets, and bathhouses that make them up. However, the queering of spaces I engaged in was not always as overt, but typically involved subtle design choices and decisions that aimed to signal to visitors and myself the values that I wanted these spaces to imbue.

Many spaces in games, especially overworlds that are shared by players, are geared to fulfill power fantasies in games and designed this way. To counter this, and ‘queer’ my own player-created spaces, would involve making design decisions that emphasized different values: softness, comfort, community. Part of the appeal of player housing and similar systems is that it affords the player the ability to become a ‘worldbuilder’ in this already existing world, and they can choose to enmesh their own creations as much or as little as they wish with the existing world. While spaces like community theatres, cafés, and noodle bars might not be priorities for level designers and may not totally fit the world they envisioned, I instead created these spaces to offer a different experience not only to myself, but to other players in these worlds. Player housing offered me the opportunity to create community while also inherently signaling the type of community that I wanted, one that was unique and welcoming.

Not only did this activity of worldbuilding allow me to have and share spaces in-game that were open, they also allowed me to represent myself in a more authentic way. Growing up queer in a rural area of Canada, though privileged in many ways, left me feeling isolated and alone for much of my adolescence. Not only did I lack a community of similar folks, I also lacked space where I could be comfortable, explore this part of my identity, and find my ‘chosen family.’ These virtual spaces, and the creative role I played in shaping and defining them, helped me feel not as alone or helpless during these times. However, continuing shifts in the video game industry show a decline in online games featuring deep, community-based player housing systems.

Why player housing is important and how it’s dying

Returning to the loss of WildStar, and several other similar games with deep housing systems, we cannot escape that the video game industry goes through intense waves of focus on particular genres. From MMORPGs to MOBAs to Battle Royales, the industry seems to adore certain genres for years only for them to lose favour, and with them, certain systems such as player housing. WildStar shut down in late 2018, and with it many developers lost their jobs that were devoted to player housing systems that they will not be able to work on again. In addition, players themselves lost access to their creations, communities, and opportunities that the game afforded and were truly innovative within the industry.

It’s important to note that there is no shortage of games that allow you to create spaces. Many survival games have complex systems of building and maintaining your own space. The Sims franchise builds its success on a foundation of allowing you to create homes, communities, and public spaces endlessly. While these systems may not necessarily have the same online functionality or direct communality that player housing in MMORPGs traditionally does, they nonetheless provide new avenues for similar gameplay of creating and queering spaces for those who need and want to realize them alongside others. Personally, I now stream Sims 4 gameplay on twitch.tv and No Man’s Sky players have created a complex system to share and colonize whole galaxies and systems since the introduction of the game’s multiplayer and building modes. There are dedicated teams of players who continue to keep now-defunct MMORPGs like Star Wars Galaxies and The Sims Online alive through emulators, improving upon the now decade-old systems.

Player housing is an important feature for players that very few games offer. It has the potential to afford players a core promise of what games offer us: creative control to impact these virtual worlds. It does this by putting the power to create and share in the hands of players in a truly genuine and freeform way, limited only by the depth of the system itself. While unfortunately we have lost many of the deepest systems through the continued decline of MMORPGs, and while these systems continue to not always align with mainstream priorities in game development, new ways of creating are continuously emerging and becoming available for folks of all backgrounds to create and share the spaces they want to see.