Sarah Stang is a first-year PhD student in the Communication & Culture joint program at York and Ryerson Universities in Toronto, Ontario. She recently completed her Master’s degree in Cinema and Media Studies at York University. Her work focuses on race and gender representation in digital games and other media.

As game critics and scholars have noted, the past decade has seen a remarkable number of critically acclaimed big-budget video games featuring paternal protagonists (Brice, 2013; Joho, 2014; Voorhees, 2016). Games journalist Stephen Totilo (2010) has celebrated what he calls the “daddening” of video games as a maturation of the industry. On the other hand, some game critics have critiqued what they label as the “dadification” of video games as simply another means for developers to valorize violent male agency (Brice, 2013; Joho, 2014). This trend has been noted in titles such as BioShock 2 (2K Marin 2010), Heavy Rain (Quantic Dream 2010), Red Dead Redemption (Rockstar San Diego 2010), The Walking Dead: Season One (Telltale Games 2012), Dishonored (Arkane Studios 2012), BioShock Infinite (Irrational Games 2013), The Last of Us (Naughty Dog 2013), and The Witcher 3: Wild Hunt (CD Projekt Red 2015), among others.

While this trend could be viewed as a more “mature” approach by the standards of the game industry, it could also be a result of what developers perceive as the shifting desires of an aging male gamer demographic, perhaps newly interested in tales of heroic fatherhood. According to the Entertainment Software Association’s report, the average game player is thirty-five years old, and the International Game Developers Association reports that many video game developers fit into this same age demographic (ESA, 2015; IGDA, 2015). According to these same reports, developers are overwhelmingly male, and so it is reasonable to assume that many of them are fathers as well. Jesper Juul (2012) has noted that developers often make games that would appeal to the demographic they fit into themselves, which may help to explain the sudden increase in father figures featured as protagonists in recent titles. Although this tendency is not problematic per se, many of these “dadified” games imbue the player-as-father with agency over the behaviour and fate of their daughter-figures. In granting a male character agency over a victimized female, developers are simply rehashing the tired damsel-in-distress trope so overused in video games.

In CD Projekt Red’s critically acclaimed dark fantasy role-playing game, the player becomes Geralt of Rivia, a witcher (professional monster slayer) whose driving motivation in the game is to find and save his adopted daughter-figure, Ciri. Periodically throughout the game, the player is given brief control of Ciri, now a young woman, in playable flashbacks. However, these moments of control do not allow the player to have any input regarding her choices or behaviour – rather they mostly involve fighting enemies. Once the pair is reunited, the player is asked to make certain decisions regarding how Geralt behaves towards Ciri.

Like many of the “pivotal ethical situations” in The Witcher 3, the player’s choices with respect to Ciri seem innocuous but actually have serious and unpredictable consequences (Tjahjono, 2016). These consequences all determine Ciri’s fate, including whether she lives or dies at the end of the game. For example, towards the end of the game, Ciri is having trouble keeping her powers and her emotions in check. She asks Geralt how he always manages to pull himself together and focus no matter what is happening. The player can choose Geralt’s response: either “Relax. You don’t have to be good at everything” or “Think I know what might lift your spirits.” 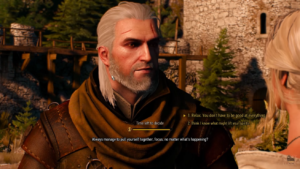 Although the first option seems like decent advice, it will lead to a negative reaction from Ciri. The vague second option will cause Geralt and Ciri to bond over a friendly snowball fight, and lead to a positive reaction. Another vital choice involves the player deciding whether to have Geralt accompany Ciri during a meeting with powerful sorceresses. Ciri is clearly distressed by the prospect of meeting with these women, and it seems like the kinder, more supportive option to have Geralt go as well. 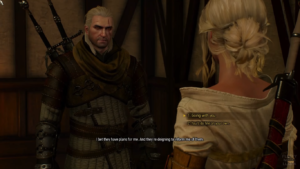 However, this choice actually leads to a negative outcome for Ciri, as encouraging her to face them alone will build up her self-esteem and confidence. Yet another choice is to either allow Ciri to let out her anger through destruction and vandalism or to tell her to calm down. Allowing her to rage is the positive choice, and Geralt even helps her do it. 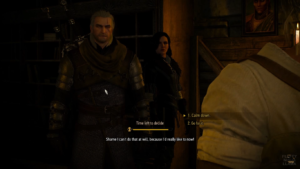 Together, these choices, along with a few others, add up to a “positive” or “negative” score for the father-daughter bond Ciri and Geralt share. If the negative outweighs the positive, Ciri will die at the end of the game, after a series of sad flashbacks showing the choices the player made. These flashbacks suggest that Ciri does not have enough faith in herself because of Geralt’s behaviour, and so she is unwilling to fight for her own survival after sacrificing herself to save the world. If the player made more positive choices but did not choose to bring Ciri to her father, the emperor, Ciri survives her sacrifice, clearly because Geralt’s support gave her enough strength to fight harder at the end. She becomes a witcher and accompanies her adoptive father into a life of monster slaying. This is clearly framed as the most satisfying ending for Geralt, as he gets to stay with his daughter, yet there is a third possible outcome for Ciri. If the player made more positive decisions than negative and brought Ciri to see the emperor, she decides that the best way for her to have a meaningful impact on the world is to succeed her father as empress. This ending is bittersweet, as Ciri must say goodbye to Geralt and begin a life she never wanted, yet it is clear that this choice is the best for the future of the world.

The Witcher 3 is not the only game to make the player-as-father determine the fate of his daughter-figure. An earlier example of this is BioShock 2, in which the player becomes the Big Daddy Subject Delta: a monstrous, genetically-altered human being who has been physically and mentally conditioned to protect a young woman named Eleanor Lamb at all costs. BioShock 2 asks the player to make the ethical choice of “harvesting” (killing) or “adopting” (saving) Little Sisters – genetically-altered little girls – throughout the game, though the player is rewarded regardless of his or her choices. The player must also choose whether to spare or murder various antagonistic and treacherous characters throughout the game, and the choices he or she makes will calibrate Eleanor’s own moral compass. If Delta adopts all the Little Sisters and spares all of the game’s antagonists, the tone of the ending is hopeful: Eleanor saves her villainous mother from drowning and refers to her father as her conscience. If Delta harvests the Little Sisters and murders his enemies, Eleanor leaves her mother to drown and prepares to conquer the world, citing her father’s survival instincts as her inspiration. In both cases, Delta dies physically but his essence is absorbed by Eleanor as she tells him that “you’ll always be with me now father, your memories, your drives, and when I need you, you’ll be there on my shoulder, whispering.” 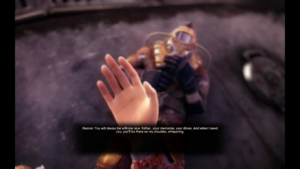 Eleanor’s cold and cruel mother, Sofia Lamb, is the game’s villain. Not only does she plan to sacrifice her daughter for her collectivist utopia, she also attempts to destroy the sanctity of the father-daughter bond by murdering Delta and keeping her daughter to herself. It is unsurprising, then, that Eleanor sees Delta as the only person she can trust. She is, like Ciri, a strong, capable, and resourceful woman. Eleanor saves Delta at least as many times as he saves her: she resurrects him at the beginning, grants him control over a Little Sister to gain his freedom, fights alongside him, and injects his dying essence into herself to let him live on inside her. Regardless of her capabilities, Eleanor’s personality and moral beliefs are completely dictated by the player’s actions. Not only does she view her father as her saviour, she models herself entirely upon his behaviour. Delta’s choices can make Eleanor become ruthless and cruel in a matter of days. In a conversation between Sofia and Delta, Eleanor’s mother observes sadly that “the girl lying on that bed is no longer my child, nor my life’s work. She is a monster, shaped by you alone. Just as she has always wanted” Eleanor is presented as an empty vessel, waiting to be (literally) filled with her father’s essence.

Both Eleanor and Ciri appear to idolize their father-figures to a dangerous and disturbing extent, and this is exacerbated by their evil or absent mothers. Eleanor’s mother is presented as the game’s villain, and Ciri has no mother at all. While Ciri does have supportive female characters in her life, their presence is relatively minimal, and her relationship with Geralt is framed as the most important and sincere one. Unfortunately, this exaggerated centralization of the father at the expense of female representation is not uncommon in popular culture. Many Hollywood narratives which feature paternal protagonists frame mothers as ineffectual, villainous, or absent/deceased – conveniently removed to allow for the centralization of the father. Feminist scholar Yvonne Tasker (2008) relates the disappearance of the mother in Hollywood films to postfeminist ideology, which frames feminist critique as no longer relevant, thereby allowing for the appropriation of feminist goals (in this case the call for more involved male parenting), and the privileging of masculine subjectivities at the expense of female representation (in this case motherhood). Unfortunately, this trend is particularly apparent when the daughter-figure is strong and capable. As Jennifer Stuller (2010) observes:

A consistent theme in stories about the female super, or action, hero is that she is reared or mentored by a man rather than a woman. Some of the strongest, most complex, and independent superwomen in modern mythology are raised by a single father, while their mother is almost always physically absent, and at least emotionally unavailable. (p. 105)

In all of the games listed above, violent male agency is valorized and justified through narratives of fathers doing whatever it takes to save their children, while mothers are conveniently absent or outright vilified to allow for the centralization of the father-daughter bond. This has caused some games journalists to ask where the mothers are in video games (Smith, 2014; Campbell, 2016). The lack of positive mother-figures in video games is certainly unsettling, and many of the same games which exclude maternal representation also centralize extremely troubling father-daughter relationships. By granting control to the player-as-father, the daughters, regardless of their strength and ability, are denied their own agency and self-determination. The Witcher 3 and BioShock 2 are only two examples, yet they are, unfortunately, representative of the current trend of “dadification” in big-budget video game development.