Born from the ashes of Gamergate and the 2016 US election, Woke Gaming: Digital Challenges to Oppression and Social Injustice (2018) investigates video games from the lens of social justice, discrimination, and domination. Edited by Kishonna Gray and David Leonard and published by the University of Washington Press, Woke Gaming includes the work of scholars from a wide range of disciplines—game design, sociology, and criminal justice among others. END_OF_DOCUMENT_TOKEN_TO_BE_REPLACED 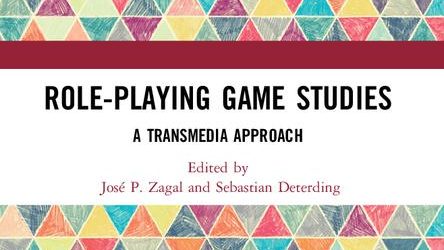 In the introduction to Role-Playing Game Studies: A Transmedia Approach, José P. Zagal and Sebastian Deterding call games “trusty little mirrors of social life . . . miniaturized, maybe a bit abstract, but strangely compelling” (1). The latter portion of that quote serves just as well to describe their book’s relation to its topic. Noting a lack of cohesion in the study of role-playing games (RPGs), Role-Playing Game Studies strives to integrate scholarly works dispersed across a variety of disciplines and locales, and to begin the work of establishing a canon of RPG scholarship. Indeed, in a space already so nebulous and uncentered as game studies, RPGs appear mostly as curiosities – blips scattered across journals, institutions, and conferences, with little sense of who else is studying them and why. END_OF_DOCUMENT_TOKEN_TO_BE_REPLACED

In Vincent Mosco’s The Digital Sublime, the author describes the cult of technology as “cyperbole,” a kind of social fervor toward new methods of communication. Electricity, telegram, television, the computer and, now, the internet all had phases in their development that emphasized the utopian potential of a new and popular technology. But, according to Mosco, the real social influence of technology isn’t apparent until it becomes banal, after the utopian promises are unfulfilled and new technology has been integrated into existing power structures. A consequence of globalized industrial capitalism is that technology becomes the locus of progress that paradoxically weaves so neatly into daily life that it becomes unnoticeable. END_OF_DOCUMENT_TOKEN_TO_BE_REPLACED

Reviewing The Toxic Meritocracy of Video Games presented a bit of a meta problem for me. Once I finished the introduction, a thought popped into my head and refused to leave. I had been asked to evaluate on its merits, including the skill of the author, a book that is about the toxicity of games that “valorize skill and technique” (back cover copy). One of the major points of the book is that meritocracy is a flawed concept. Identifying meritocracy as a system in which skill is measured and outcomes tracked, with a mixture of talent and hard work rewarded, the author states that “meritocracy isolates, individualizes, and strips out context” (13). END_OF_DOCUMENT_TOKEN_TO_BE_REPLACED

As a topic, ‘Metagaming’ is heating up. Generally used as a catchall term used to describe all the ways in which games interface with the contexts in which they are played (Garfield 2000), discussions of metagaming have seeped into a broad range of competitive play communities (Abbott 2016; Masisak 2011). Academics also are learning to pay heed to the role of metagames in shaping communities of play and informing game design practice (Kow, Young, and Tekinbas 2014; Carter and Gibbs 2013; Carter, Gibbs, and Harrop 2012; Donaldson 2016). Nevertheless, discussion on the topic has been, for the most part, scattered, sparse, and balkanized. END_OF_DOCUMENT_TOKEN_TO_BE_REPLACED

There’s a scene that Bonnie Ruberg describes in the final chapter of Queer Game Studies (University of Minnesota Press, 2017), which still resonates long after I finished the work. It’s a scene of the inevitable social banter after a panel discussion at an academic conference where, as Ruberg states, she feels “pressured to either tone down my queerness […] or to perform it” (271). For Ruberg, her queerness is not evident in people’s assumptions of her while also simultaneously too evident in her research in queer gaming. She reminds herself to not mention her ex-girlfriend and to silence her kinkiness; she dresses the professional part to blend in and answers questions about her research with a smile on her face—and yet, she still deals with feelings of being “the weird grad student” and with people’s seemingly never-ending questions of “Queerness? And games?” with a twinge of disgust (272). END_OF_DOCUMENT_TOKEN_TO_BE_REPLACED

Despite its growing cultural legitimation, for some, gaming still begins and ends with a man-child screaming into a headset while he fires round after virtual round into digital insurgents in vaguely Middle-Eastern locales. The spectacular and seemingly escapist nature of many military themed first-person shooters make them less tempting for critique, especially in a field full of unexamined experiments in critical and self-reflexive play. Perhaps this is why scholarship on the subject has been somewhat lacking, finding niches in game studies anthologies or as minor parts of larger projects on Empire despite the genre’s extreme popularity and gaming’s already troubling connection to contemporary technologies of war. Luckily, Matthew Thomas Payne’s Playing War: Military Video Games after 9/11 provides an excellently researched (and long overdue) book-length examination of the military video game and its relationship to cultural mythologies surrounding the ongoing War on Terror. Perhaps more importantly, Payne’s accessible methodology and emphasis on the political stakes of gaming make his project one worth emulating. END_OF_DOCUMENT_TOKEN_TO_BE_REPLACED