Porter Simmons is a writer and e-commerce director from Salt Lake City.

I had never played online games before social distancing, a result of habit more than anything else. As a teenager living under my parents’ roof, the only thing in our house that was connected to the internet was the family computer, carefully positioned in a central location, near foot traffic, and always password protected for good measure. This created an invisible barrier around our house, warding away viruses, porn, and any other evil spirits that dared drift our way, and while this certainly spared me a few punishments and eye-openers, it also gifted me a lasting distrust of the internet and everyone on it.

Warzone (Activision 2020)—an online-only, free-to-play appendage to Call of Duty: Modern Warfare (Activision 2019)—was released on 10 March 2020, just one day before the World Health Organization declared COVID-19 a global pandemic. The timing couldn’t have been any better for the game’s reception: with people stuck at home, Warzone became a quick success, reaching 50 million downloads in its first month. Call of Duty games take years to develop, but in hindsight, it’s hard to imagine that Warzone immediately preceded the pandemic by dumb luck.

My brothers-in-law Ethan (20) and Chase (16) came knocking shortly after schools closed. Armed with ample free time and a healthy dose of early quarantine enthusiasm, they were ready to dive headlong into Warzone and invited me to join their team. While I love both of them and felt honored they’d invite me to play, the idea of playing with them made me more than a little anxious. At the time, my experience online was limited to a few brief but brutal matches of Star Wars Battlefront II (Electronic Arts 2017), which had served as a not-so-friendly reminder that I’m not actually very good at video games. Which is why, when they first asked me, I said no.

After dodging their invites for a few weeks, I was playing the Modern Warfare campaign on a Tuesday night when my phone buzzed with a text from Chase: “Wanna Warzone?” I debated whether I should reply or pretend to be asleep, but finally responded with, “Sorry, can’t tonight. Going to bed soon. Next week maybe?” I didn’t have any intention of going to bed soon, but the prospect of playing online with my brothers-in-law wasn’t something I was ready to tackle yet. With that, I settled back into the comforts of the single-player campaign: predictable AI and nobody to watch me lose. A minute or so went by before a notification appeared in the corner of the TV: an invitation from Chase to play Warzone. I had to hand it to him: the kid was persistent. Since it was apparent I couldn’t avoid them any longer, I sent Chase a text that said, “Okay, sure. Let’s play.”

While we waited for Ethan to join, Chase invited me to a Discord channel and proceeded to describe fragments of game rules: something about the Gulag, something about gas circles, something about drop zones. The specifics were hazy, but the broad strokes—pick up guns, shoot anything that moves—seemed straightforward enough. This is also when he mentioned that in Warzone, teams were composed of three players. Suddenly, the persistence made a lot more sense. “Don’t worry,” he said after explaining the rules, observing they were mostly over my head. “It’ll make sense. We’ll show you.”

After Chase and I had waited in the lobby for a few minutes, Ethan joined the Discord channel and his character appeared next to ours on the screen. “How was your soup?” Chase jeered; “Delicious,” Ethan replied dryly. They bantered absently while I watched the game search for a whopping 147 more players and count down to deployment. I tried to soak up every piece of information on the loading screens but was mostly amazed at how relaxed Ethan and Chase seemed before a new match. While they were busy joking around, my stomach was doing bush-league somersaults as I thought back to the repetitious deaths I’d suffered at the hands of strangers in Battlefront II. 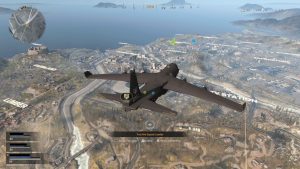 Then we were airborne. After some debate, they decided we should parachute into the lumber yard, an earth-toned portion of the map decorated with large buildings and scored with train tracks. I followed Ethan and Chase into a large compound and we ran from room to room, scavenging for guns and ammo. “Here, grab this,” Ethan said, marking an assault rifle on the map. While he re-explained the controls and key game mechanics, Chase broke through every door and window in our building before sprinting back to us and dropping a few bundles of ammo at my feet. “Take these,” Chase said. “Alright, where we headed?”

That’s what the first match looked like: polite, helpful, and a little bit formal. Over time, though, the first few minutes of a new game became less about helping the team and more about becoming the first one to find the best stuff. When we play now, it’s an all-out sprint through rooms and buildings, barging through doors and busting open crates in an effort to be the most prepared teammate—and we don’t mind stealing from each other to get there. It’s a bit of a cutthroat way to start a match, especially considering we’re all on the same team, but once we started stealing from and yelling at each other we finally started to feel like teammates.

And we do make a pretty good team, because each of us sticks to what we’re good at. Chase is the instigator and the main reason we have fun in Warzone. At any point, he’s probably most interested in shooting at other players even if he doesn’t have a particularly good shot or it means trading away our strategic advantage. I’ve lost count of how many matches we’ve lost because he decided to shoot at another player from too far away with a bad sniper rifle or because he willingly sprinted into a certain death situation, but it doesn’t bother us. His whole strategy, if you can call it that, is to run and gun—or, as he puts it, “Full send or no send.” He also likes to loudly eat tortilla chips past midnight and depending on the day will either complain about how the chair he’s using is broken or about how his dad forgot to charge the controller. Occasionally he will complain about both.

Ethan is somehow both the brains and brawn of our group. If we ever crack the top ten, it’s because either we listened to him or he had the good sense to ignore our advice. He’s good with bad weapons, great with good weapons, and speaks mostly in commands. He knows where to hide, when to strike, and can occasionally talk Chase out of engaging with teams that are halfway across the map—an impressive skill in and of itself. He’s also an art student and will frequently make comments—some critical, some contextual—on the blocky architecture and monolithic sculptures scattered across the map. He’s explained that these features are hallmarks of the Brutalist movement, which emerged as part of the post-war reconstruction effort in Europe. Knowing these details are at least partially accurate in the game adds a layer of realism I wouldn’t have been able to see otherwise, so I appreciate that Ethan pays attention during his art history classes.

Then there’s me. Ethan and Chase call me “moneybags” because I have a knack for finding—and hoarding—mounds of in-game cash. While I’m not great in a firefight, I am overly cautious around corners and am a shameless camper, which usually amounts to me being the first one dead or the last one alive. I’m not above hiding in bathtubs or bathroom stalls until an enemy team leaves, then using my cash reserves to buy Ethan and Chase back from the dead at the nearest buy station. I might be clumsy with a weapon, but I know how to cower and hide and stay alive like a true professional. 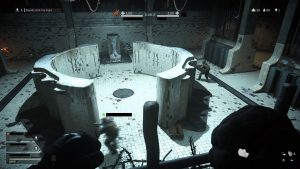 A few weeks after the initial match, we were foraging for loot in the downtown area of the map when Chase asked, “Hey—do you guys think we have free will?” We silently considered the question for a few seconds. “Well,” I said, picking up an Uzi, “Honestly? I don’t know, but I mean—I like to think so.” Ethan marked a location on the map. “Let’s move over here,” he noted, then asked, “What do you think, Chase?” We followed Ethan slowly down the street towards the marked location while Chase explained both sides of the argument as he saw them.

“On the one hand, I don’t feel like anyone is controlling me,” Chase said. “Like, I feel like I’m in charge of my own life.” “Enemies,” Ethan said, marking them on the map. We ran for cover behind a wall as the other team spotted us and started shooting. Chase leaned around the corner and returned fire. “But like, if we don’t have free will, it’s probably impossible to know that, right?” he continued. “Because if we’re not even making our own decisions, then how would we be able to know something like that for sure?” Then he added, “Oh, I got one. There’s one more over there.”

“He’s hiding behind that wall,” I said, marking the location. “I see him,” Ethan said, looking through the scope on his sniper rifle. The streets were silent for a few seconds before a shot rang out. “He’s down,” Ethan confirmed. “That’s it. Team wipe.” We each took a minute to reload and stock up on ammo while Ethan plotted our next move. “Anyway,” Chase concluded, “that’s it. Just something I’ve been thinking about.”

I’ve known them for nearly ten years, but it’s never been clearer how smart, funny, and motivated my brothers are than when we’re playing Warzone. That’s a strange realization to have when you’re playing a video game, something most of us are conditioned to think of as a juvenile, anti-social pastime; it’s a downright bizarre realization to have when you’re socially distanced and rarely see each other. I’ve only seen them face-to-face a handful of times since COVID-19 was declared a pandemic, but since we started playing Warzone we’ve interacted on an almost daily basis. It’s not all about the game, though: I’ve learned that Ethan is shopping for his first car and has been looking for a new job; Chase has talked about trying out for the cheer team and has voiced concerns about applying for college in a post-quarantine world. In one way or another Warzone has facilitated all of these conversations, whether they happened in or out of the game. 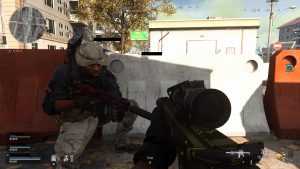 Barring any asteroids or second comings, COVID-19 may define our lives for the next few years. The devastation is relatively easy to measure in hard numbers—lives, dollars, and jobs—but it’s more difficult to account for the mental and emotional cost of practicing safe social distancing. With the timeline still plagued by unknowns, one of the most interesting challenges becomes how we’ll build and maintain connections with those around us from a safe distance in the coming months and years. By and large, this question doesn’t have right or wrong answers. But as I’ve searched for new ways to connect, I haven’t found anything more satisfying than Warzone.

In what I consider a strange turn of events, Ethan finally found a job on the front lines: at a testing center for COVID-19. Among other things, this means that our rare in-person visits will need to be put on hold for a while. Situations like this give me a deeper appreciation for the internet and the ways it allows us to connect with each other. It’s nice to be able to explore new places in the digital landscape, and even better if you can explore them with others. Even if those places happen to be war zones.