Douglas Fry recently graduated with a Masters from the Department of Security Studies and Criminology at Macquarie University, Sydney, Australia. He is currently a doctoral candidate with the Australian Graduate School of Policing and Security at Charles Sturt University. His writing has been published by Zam, Vice, and Fairfax Media.

According to The Division, America is very, very sick. The nation is stricken with “Green Poison,” a fatal, highly contagious disease. New York City, ground zero for this devastating pandemic, has fallen into chaos and ruin. Quarantined survivors are forced to scavenge through the garbage bags and abandoned cars that fill the streets. They are trapped by their protectors, a Joint Task Force (JTF) comprised of police and military personnel that impose endless checkpoints, martial law, lethal measures in the event of non-compliance. Backed by agents from the secretive Strategic Homeland Division, the JTF exchanges near-constant gunfire with the violent groups that roam the crumbling city, killing at random. The Division is a portrait of America on the cusp of outright failure as a functioning state.

The game’s central premise arguably extends beyond the literal illness that has spread across America and posits that a serious moral illness has taken hold in the national psyche. Mechanically speaking, The Division is straightforward enough, an action-heavy RPG-lite with occasional MMO trimmings. In sum: shoot, loot, and grind. By virtue of these mechanics, perhaps, the main narrative is quite thin when taken at face value. The player is enlisted as a Division agent, called upon in America’s darkest hour to eliminate The Bad Guys and restore water/power/order to Manhattan, one quest at a time. The story is utilitarian, digestible pulp to instantly gratify its audience, a catalyst for levelling up and spawning endless waves of enemies. But as Mike Perna at GameChurch has pointed out, the real substance to The Division often lies at the periphery, like the NPC interactions, signage, and telephone conversations that could just as easily be ignored without any impact on the core gameplay experience. Through these incidental details, however, Ubisoft Massive offer an incisive commentary on the State of the Union in the year 2016 – that is to say, the real-life United States’ tenuous grip on global primacy and domestic coherence.

In the period between The Division’s debut at E3 2013 and its retail launch last month, America has grappled with a complex series of internal and external problems. China has intensified its challenge to American hegemony, carving out military bases in contested waters, launching cyber attacks, and imposing no-fly zones. At the same time, the US military continues to lick its wounds from costly excursions into Iraq and Afghanistan; depleted by budget cuts and veteran suicides, the premier showcase of American power is  worn out and reluctant to fight. Demoralised soldiers have resorted to killing sprees, yet horrific mass shootings are no longer an aberration, occurring so regularly that the nation is resigned to their inevitability. Anti-vaxxers decry simple flu shots as the source of autism, multiple sclerosis, and death. Anti-government elements storm a federal building, murder cops in a restaurant and a Greyhound bus station, attack police facilities with explosives and an armoured vehicle. Lingering economic fallout from the Global Financial Crisis led to mass outpourings of resentment towards the status quo through the Occupy movement. Meanwhile, a potential Presidential race between Trump and Clinton has polarised the enthusiasts to an extreme, even violent degree, while the bloated middle ground watches on with disaffection and apathy. As retired US diplomat Chas W Freeman recently remarked, the American people

…feel that they have been reduced to the status of the chorus in a Greek tragedy. They can see the blind self-destructiveness of the actors on the political stage and can moan out loud about it. But they cannot stop the actors from proceeding toward their (and our) doom.

Thus, The Division is something of a multi-faceted title, an allusion to the social rifts that – while a longstanding, even celebrated feature of American culture – have now become so wide they stand to swallow the nation whole. The game presents a version of New York City that is, to begin with, isolated from the rest of the nation. The remaining inhabitants feebly cough and shuffle through the frozen streets, scratching around for a flash of humanity, the haves and have-nots reduced to squabbles over basic comforts (“Please, just a few,” begs one survivor to another. “I haven’t had a cigarette in a week.”) The city is further divided into subsections – heavily regulated JTF safe havens, demarcated factional territories, quarantine zones piled with sodden biohazard bags.

Then there is the Dark Zone, a large expanse of Midtown Manhattan that is sealed off with tattered black plastic, all communication lost with Division agents who have ventured inside. The eponymous Division is, of course, the primary source for the game’s title, a clandestine agency (presumably inspired by the CIA’s paramilitary branch, the Special Activities Division) brought in as a final measure to restore order to New York City. There is a schism even within this elite organisation, however, as “rogue” agents – alluded to in the main narrative, and embodied by PVP antagonism – have selfishly turned on fellow Division members in search of material gain, profit, and power.

In this regard, rogue Division agents mirror the violent groups they are ostensibly tasked with confronting and eliminating. The game’s numerous enemy factions serve vastly different motivations – Rikers inmates have escaped into the bliss of anarchic freedom, for example, while Last Man Battalion mercenaries want to instate fascist rule. Each faction shares the same core impetus, however – to exploit a once-great city on the precipice of total breakdown, fighting the government and each other for primacy. The Division’s mission is to subdue this multilateral insurrection, but in joining the fray and going rogue, it ultimately becomes another lawless group forging a violent path to power. New York City represents only one location in a nationwide pandemic; major cities like Philadelphia, Chicago, and Los Angeles are reportedly also suffering. If its premier metropolis has violently fragmented, it stands to reason that the rest of America is at war with itself too, ripped apart by conflict, splintered by factionalism. One nation under martial law, divided, with liberty and justice suspended.

The line is blurred, almost indistinguishable, between the police and military assets that comprise the JTF. Police officers and soldiers, dressed in helmets and body armour, conduct heavily armed foot patrols, while police cars and military vehicles are identically marked with green duct tape to identify their allegiance. The game also features a facsimile of the Lenco BearCat, a popular armoured vehicle among the burgeoning number of SWAT teams in America, and notoriously used as a platform for police snipers during the August 2014 riots in Ferguson, Missouri. While the JTF does represent some semblance of centralised government, its methods of control verge on draconian, the kind of heavy-handed measures that are concomitant with the security forces of a failing state. As political science scholar Robert I. Rotberg notes,

[An] indicator of state failure is the growth of criminal violence. As state authority weakens and fails, and as the state becomes criminal in its oppression of its citizens, so lawlessness becomes more apparent. Criminal gangs take over the streets of the cities. Arms and drug trafficking become more common. Ordinary police forces become paralysed (p6).

Indeed, even with potent symbols of authority at its disposal, there are cracks in the JTF’s cohesion. The task force has been depleted to the point that it is largely ineffective against the violent factions that are vying for power; its personnel are strung up around the city by vengeful Rikers, while JTF weakness is ridiculed and derided in a Last Man Battalion propaganda video. Its members are breaking under the strain, too: In one NPC interaction, a soldier consoles a distraught police officer, who sobs at the apparent futility the situation. His sentiments are echoed by a state trooper in the game’s opening video: “It’s not our job!” he shouts, voice thick with anger and sadness. “We’re not trained for this!” 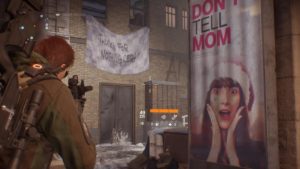 CERA, the game’s Federal Emergency Management Agency equivalent, hardly makes a compelling demonstration of government functionality, either. The agency’s efforts to contain the crisis are inadequate, leading to unnecessary deaths – including of its own employees, scores of whom litter the quarantined areas, slumped lifeless in their yellow HAZMAT suits. As with Hurricane Katrina in 2005, the agency’s inefficiency is criticised by survivors who remain in the disaster zone: “Fuck CERA,” some graffiti declares, accusing the agency of failure. Thus the onus falls almost entirely on the Strategic Homeland Division to not only restore order to the city, but faith in the system. Indeed, some NPCs express high admiration for the Division’s operators (“My kid idolises you!” “Thank you for all you’re doing!”), but just as many are suspicious or outright afraid of them. As Heather Alexandra observes in a Giant Bomb guest column, this reflects the almost exclusively violent nature of the Division’s mission in Manhattan. It is not a humanitarian organisation, save for the odd handout to desperate civilians. It is a pure killing machine, and even the Division’s allies – cynical police captain Roy Benitez, for example – are wary of the motives behind its intervention.

In this regard, the game itself is torn between its political affinities. On one hand, it devoutly maintains the Tom Clancy-branded tradition of fetishising modern and near-future military hardware, giving players a vast arsenal of firearms to equip and modify. Yet for all its revelry in repeated and clinical murder, the game also laments the death and destruction that necessitated the deployment of the Division in the first place – the woman who weeps incessantly at a cinema safe house, for example, crumpled onto her knees at a makeshift altar for the disaster victims. Similarly, The Division has been a resounding commercial hit for Ubisoft, backed by a comprehensive global marketing campaign, but the game also despairs at the voracious consumerism that it owes its success to. Indeed, the very source of the game’s pandemic – and by extension, the death and turmoil that ensues – is the Black Friday sales that send Americans into a spending frenzy every November. Obsolete advertising for products that people once fought to possess and consume, now provides cover from bullets as people fight to survive and dominate.

The collapse of modern civilization – from an American perspective in particular – is well-trodden territory for videogames, of course. From Fallout to The Last of Us to The Walking Dead, players have repeatedly been given the opportunity to explore the consequences of a total social breakdown, the dire measures that must be taken to survive in the post-apocalypse. Where The Division differs from its peers, however, is in its portrayal of the collapse itself, a perfectly tangible outcome of the very real issues affecting post-9/11 America . The Green Poison is not some sinister microbiological agent, but a state of depression, selfishness, and ignorance that is rapidly undercutting a once great nation. Accordingly, The Division places its audience in a disconcerting position – Rome is burning, and you’re playing out the consequences while the flames are glowing on the near horizon. In shutting out the real world to grind away long hours in search of XP, while simultaneously exacerbating the in-game conflict, players are responsible for the virtual and actual failure of America all at once. We Are The Division, indeed.