Are videogames art? The question has sparked heated debate in recent years, perhaps most notoriously in 2010, when film critic Roger Ebert published a piece in the Chicago Sun-Times stating quite brashly that “Video games can never be art.” Although Ebert later issued an apology, it seems that the gaming community has been fighting to prove him wrong ever since.

Competing definitions of artistic legitimacy are obviously nothing new: they’ve been part of our critical discourse since Aristotle. The question of what counts as capital-A “Art” rears its head with every new medium, genre, and generation of artists trying to prove itself in Pierre Boudieu’s “field of cultural production.” In the early twentieth century, entire modernist movements brought questions surrounding the ontological status of the unproven art form to the foreground of high culture. The boundary-pushing escalated until it reached a sort of zenith with the explosion of minimalist, conceptual, and pop art in the postmodern 1960s. (This is about the time when works “so simple a five-year-old could do better” became lucrative gallery centrepieces.) The reason I provide this quick historical gloss is to draw our attention to the fact that the time-honoured question of the subjective value of art essentially imploded at the height of postmodernism. In the “posteverything” twenty-first century, even the postmodernists have been canonized and institutionalized, and earlier definitions of value have been rendered irrelevant for a contemporary audience.

The artistic status of videogames lacks the same sense of urgency in 2013 as it did when Ebert published his column just three years earlier. Games have earned a fair bit of respect in the public eye. Just last year, the Smithsonian American Art Museum exhibited The Art of Video Games, featuring 80 different titles ordered chronologically by platform. The Museum of Modern Art is scheduled to open a similar–if much smaller in scope–Video Games exhibit starting out with 14 games in 2013. The latter’s initial offerings were chosen, not only for their aesthetic value, but also their innovation in interaction design. Both exhibits have acquired a mixed roster of mainstream and indie games, AAA titles and one-off experiments. As history repeats itself, both the popular and the avant-garde have once again been institutionalized as art. From an academic standpoint, rehashing the same circular debate about what counts as art is no longer productive. It’s time to move on. This particular debate is a rerun. 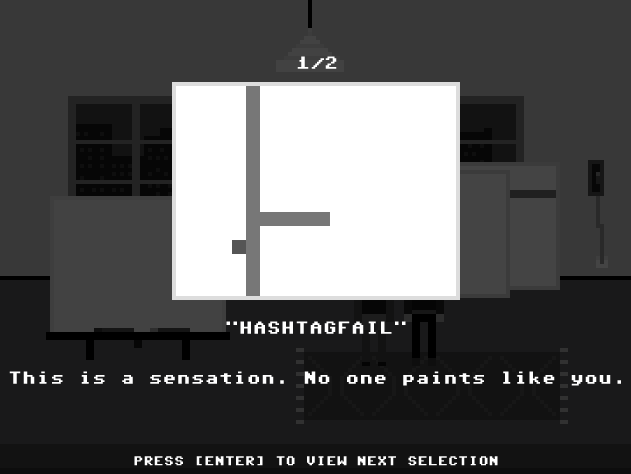 Over the past several years, independent developers have been gaining increasingly wider audiences, in large part thanks to platforms such as Steam, where “the little indie that could” can hold its own alongside major franchises, and even get recognized as “Game of the Year” in various circles. (The latter happened twice in 2012, with thatgamecompany’s Journey and Telltale’s The Walking Dead.) We are also seeing more and more digital artists and experimental game designers creating works often grouped together under the category of “art games,” the singular of which is defined by Tiffany Holmes as “an interactive work, usually humorous, by a visual artist that does one or more of the following: challenges cultural stereotypes, offers meaningful social or historical critique, or tells a story in a novel manner” (46).

Malta-based game designer and critic Pippin Barr is well known for his 2011 art game, The Artist Is Present, a digital remediation of Marina Abramovic’s famous 2010 performance/installation at the Museum of Modern Art. But like every public institution, MoMA is only open during business hours, and the same goes for Barr’s virtual exhibit. If you load up The Artist Is Present at the wrong time of day, you can stand around outside the door, but can’t go inside. If you do get in, there’s a ridiculously long line-up to see Abramovic. Now that’s an art game! Barr’s latest release, the aptly titled Art Game (2013), is a similar retro-styled “art game,” but in keeping with many of his previous works, it’s also deliciously meta.

Art Game is an art game about the art of making games and the game of making art. Barr’s own written description of the game humorously summarizes the perpetual catch-22 of working in the creative industries: “Experience the exhilaration of making art you really believe in! Experience the agony of rejection by the curatorial team! Consider selling out and just making what people seem to want! Change your mind again and follow your dreams! Be a star of the art world! Be a horrible failure! Be an artist!” 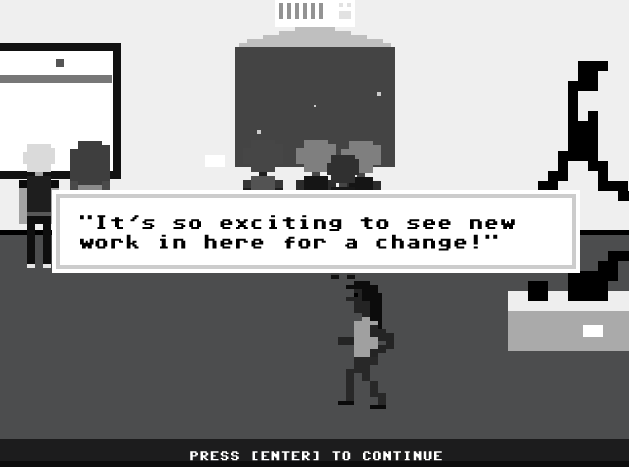 The premise of Art Game is straightforward and all too familiar to anyone who has ever been judged on the subjective quality of his or her work. You take on the role of a famous painter, sculptor, or–in 2-player mode–a pair of twin video artists, and you produce artistic works to be judged by the curator of an exhibit. You go through the always frustrating process of rejection and acceptance. You then get the chance to display your works to members of the public, visit the exhibit, and eavesdrop on the often less-than-flattering viewers’ commentary. At the end of the game, you get to hear what the critics thought of your masterpieces. But that’s only one layer of the experience. The actual gameplay, the making of art, looks very much like playing a game. In fact, the process of creating art inside Art Game is precisely that of playing one of three classic videogames corresponding to your avatar’s medium: you paint with Snake, you sculpt with Tetris, and you make two-player video art with Spacewar. Barr’s monochromatic colour scheme and signature pixelated style mimics the aesthetic of the three older arcade games in such a way that Art Game effectively remediates their mechanics without disrupting the player’s focus.

When I played as painter Cicero Sassoon, it didn’t matter that I’ve never been able to last more than a couple minutes in a game of Snake. As soon as my snake ran into itself, the mini-game ended and the final screen capture became my first painting, a tongue-in-cheek reinterpretation of minimalist art. I played several more short-lived games of Snake, and gave the resulting paintings ridiculous titles such as “Minimalist Painting No. 475723,” “This Is High Art,” and “HASHTAGFAIL.” When I called in the curator to assess my work, she (ironically) raved about “HASHTAGFAIL” and dismissed my other two masterpieces. At first, I attributed her decision to the fact that I had survived a bit longer in my third game of Snake, so I tried again. On the second round, I was pickier with which pieces I chose to save for the curator. I discarded a bunch of new pieces that resembled my previous endeavours too closely (because, well, all games of Snake pretty much look the same), and began actively trying to fail at just the right moment to produce something notably different and more aesthetically pleasing. Rock, Paper, Shotgun’s Alec Meer tells of a similar experience in his own play-through:

To begin with it, it all seems silly, or arch, or both, but then something happens. Eventually, you become proud of the strange, abstract, simple shapes you’re submitting to the gallery.

For instance, failing at Snake in such a way that you create a perfect square.

They still don’t want it.

You are angry because you have been rejected. (Alec Meer, Rock, Paper, Shotgun)

It might sound ridiculous, but I did take a certain amount of pride in a game well-failed. And it was frustrating when the curator dismissed my real efforts at Tetris sculpture in favour of earlier warm-ups or half-assed attempts. Of course, none of that actually mattered. It quickly became obvious that Art Game’s curator and gallery attendees praise or disparage works at random. Which isn’t that far off from real life, or so it sometimes seems. Barr explains to Gamasutra’s Leigh Alexander his decision to randomize the curator’s responses:

Some people felt like it was snarky commentary on the meaninglessness of curatorial decisions, or the arbitrary nature of contemporary art, but that wasn’t really it. . . . I made the game’s curator arbitrary because it seemed like the most honest way to build it–if I’d had some underlying system that judged good and bad art, that would have felt wrong to me (not to mention that people would have   gamed that underlying system). (Leigh Alexander, Gamasutra)

Art Game allows you to experience the trials and tribulations of life as a professional artist, but it also speaks to how value is determined in the collective creative industries. There’s an obvious commentary to be made here on the fickleness of the games industry, but also the world of literary publishing, and arguably academia as well. If you’ve ever had that nagging feeling that your own industry determines value arbitrarily, Art Game turns that feeling into a randomized algorithm, or an “allegorithm” in Alexander Galloway’s terms. For Galloway, “[t]o play the game means to play the code of the game. To win means to know the system. And thus to interpret a game means to interpret its algorithm (to discover its parallel allegorithm)” (qtd. in Wark 30). In GAM3R 7H30RY, McKenzie Wark adopts and expands on Galloway’s term in relation to his own concept of “gamespace,” our contemporary social reality construed as an algorithmic, procedural space:

Allegory becomes a double relation: one the one side, there is the relation of gamer to algorithm in the game, its allegorithm; on the other, there is the relation of allegorithm to everyday life in gamespace. In relation to gamespace, the game itself works as an escape from the agony of everyday life, where the stakes are real and uncertain, to the unreal stakes of a pure game. But the game can also work as a critique, in turn, of the unreality of the stakes of gamespace itself. (McKenzie Wark 42)

So, to bring this digression back to Art Game, I find the concept of allegorithm, which bears similarities to Ian Bogost’s procedural rhetoric, a useful concept to explain my own reaction, apparently shared by other players and critics, to this otherwise quite silly and fun little browser game. Barr’s 8-bit artists never react to the judgements passed in the game, and they certainly don’t emote, so any sense of pride or frustration I felt at my painter or sculptor’s successes and failures came directly from me, the artist in the game and the artist-academic outside the game who was already very familiar with the way these processes function in real life. Except real life isn’t exactly coded in advance, and I’d like to think that value judgements are based on something slightly more substantial than a randomized algorithm. As quoted in the above interview, Barr didn’t intend the arbitrary algorithm to be a cynical commentary on the contemporary art world. Rather, “it seemed like the most honest way to build it,” which is a kind of social commentary in and of itself.