What is “sex as conquest”? To answer that, first we need to discuss what consent means. Consent is not merely a thing that is given or traded between two people. It is a communal, philosophical, and political ethos that attempts to be aware of class, gender, power structures, and power differentials. When we talk about consent, we’re not just talking about you agreeing to something. We’re talking about the framework within which you can agree to something and the tools you have access to in order to agree—whether it’s to agree to have sex or to exchange power.

(Here, have a pinball. I promise this is about games.) 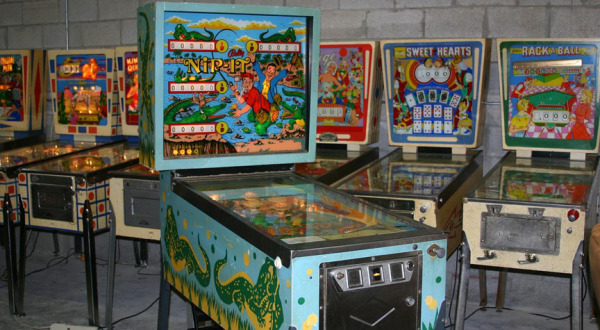 This gives us a lot of ugly stuff. When someone on Grindr says “no chocolate, no curry,” they’re not informing you of their diet. They are expressing that, because of society’s standards, they have assigned value, like a numerical score, to potential sex partners, some of whom are scored zero. In the equation of having sex with this person vs. that person, one is worth more than the other and some people have no worth at all.

This is frankly rampant in the queer community. I love being a queer and I love queerness, but part of that is calling out the ugliness of queerness, and there’s a lot of ugliness in queer sexuality. There’s the compulsory centering of masculinity. There’s how non-monogamy becomes a way to curate the people in our lives according to systemic and social value.

A lot of this ties back to a set of what I call “compulsory universals”—the idea that men are this way, women are this other way, white people are like this, people of color are like that. We assign values to these people and to our relationships and sexual encounters with them. When we do this, we are forcing ourselves and each other to play by a specific, universal set of rules. That’s really harmful because it doesn’t allow people to navigate and negotiate for things that they need.

It reduces sex to Supermarket Sweep.

I would be remiss if I didn’t mention GamerGate. An aspect of GamerGate is a push toward a compulsory universal: “real” games involve twitch mechanics and shooting and realistic graphics and do not make an agenda of including diversity. At least, that’s how I would categorize all of the games GamerGate is placing on their standard.

All games must behave in a certain fashion. There’s a reason why GamerGate is specifically targeting indie developers making non-standard games. No one is being threatened over Chu Chu Rocket.

What does pinball have to offer in this discussion?

I want to start by saying: I am very disappointed that pinball has been largely left out in discussions of queerness and games.

These are literally games that you hump to avoid losing.

Anyway, what is a pinball machine? I don’t fucking know.

So there is no, “what is a pinball.” There is no unifying theory of pinball game design.

There’s a lot of working out a narrative, collaborating with the machine.

On the matter of tilting—let me tell you about the plumb bob. Pinball machines “tilt” because there is a needle dangling over a metal circle, essentially like Operation. I have seen people lift pinball machines up and scootch them a great deal without lighting up the tilt. Nugding the machine is not cheating. It is a range of allowances. I enjoy spanking, being choked, called names—but if I were to be hit too hard or called the wrong sort of name, I would “tilt”, too.

The tilt is a safeword. It is not a “failure state” (though it does cost you your ball) but an assertion of limits—which is necessary for collaboration.

So I don’t believe there’s “good at pinball.”

In the same vein, I don’t believe there’s “good at sex.” I just don’t. And I am someone who has been paid to have sex, so I’m telling you this as an expert in the field. There’s no such thing as “good at sex.” You’re either a good listener and collaborator, or you’re not.

Of course, this idea is “disruptive” of the common narrative of consent in sex. If we cease to see people as good at something, if we cease to see sex as a commodity, as a skill, as a means of gathering resources, then Cosmo is not going to sell a whole lot of magazines. It’s the idea of being good, of having tricks, of being able to deceive and surprise people that encourages some writer to say, “Put a donut on his dick and eat it off.” If we move toward this idea that there is no good at sex, there’s only good listening, there’s only good sharing between people,. We can confront this idea of sex as conquest and ultimately confront a lot of the ugliness that exists in heterosexual sexuality and queer sexuality. 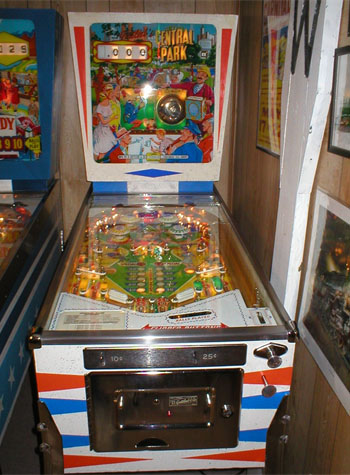 It’s precisely at the moment that we try to enforce a compulsory universal standard that we diminish our capacity for consent.

For me, consent is a unique set of rules. My relationships with various partners are vastly different. I date mostly other femme women, but I do not operate under a set of “how do I date other femme women” guidelines, because if I did that they would simply be interchangeable. My partners would just be substitutes for each other.

Just as every pinball machine is different, I encourage you to view each individual relationship that you have as a unique set of rules—not rules that govern failure, because the thing with pinball is you’ll always fail. The machine always wins, which is why pinball is so beautiful. In alchemy, there’s this concept of the magnum opus. The magnum opus is the combining of disciplines and scientific knowledge to create a singularity. In alchemy’s case, it’s the philosopher’s stone. 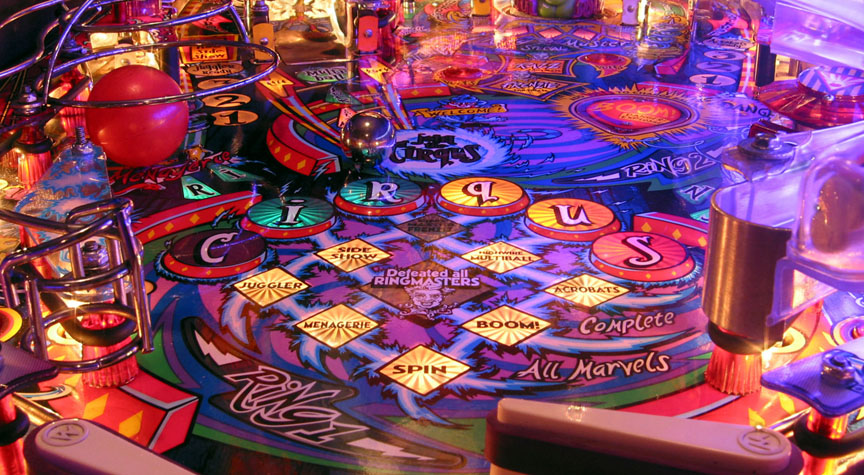 But with pinball, since each of these machines have vastly different design mechanics and art styles and stories, it’s impossible to combine them all into a unifying theory of what makes pinball good.

What I love about pinball is how it combines all this knowledge and all this power to flood you with stimuli and take your money. I think that’s so beautiful. That beauty is preserved in that resistance to unify, in that refusal of a codifying a standard, which would be coercive. That’s the other issue with compulsory, universal guidelines: they’re coercive. You’re always going to have women who fall outside the definition of what women would be, because that’s just how humans work. So this idea that we must codify sexuality—this is what gay is, this is what straight is, this is how women date, this is how men date—this coercively confines people.

That, to me, is what queerness is all about. It’s not, “I have half my head shaved.” It’s not, “I date women, but sometimes I date a non-woman.” Queerness, to me, is the magic circles that I create with each sexual partner, as well as each platonic relationship.

Let’s not overlook the importance of non-sexual relationships to queer identity. 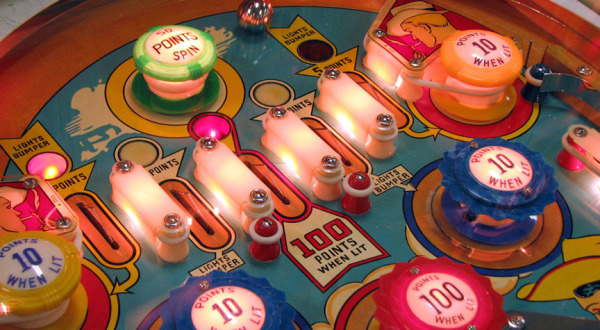 As we define queerness in gaming, and as we define identity in the wake of GamerGate, the nightmare hate syndicate that is trying to force us all out of our homes, we should mindfully resist the urge to draft these overly long and intricate ideas of what constitutes queer gaming or what constitutes indie gaming.

Doing so will set us up for failure—as we entrench ourselves in the pursuit of the most perfect and rigid language to describe our identities, we exclude, effectively forcing people out of our communities and our language.

Fun fact: the first prominent pinball player was a woman.

In 1890, when Montague Redgrave came out with Bagatelle, he made it for his daughter. His daughter liked it so much that it ended up becoming a booming industry. I shouldn’t have to tell you this. This should be a central tenet in gaming history.

Ludonarrative dissonance didn’t mean anything to Ms. Redgrave—nonetheless her enthusiasm for a self-published one of a kind game helped spark a thriving craze and industry that predated videogames.

She was an indie gamer, even if she does not benefit retroactively from your enlightened self-congratulatory rhetoric.

There’s another lesson to be learned from pinball here. Pinball suffered a massive collapse between the 1970’s and the 1990’s. The arcade industry as a whole shuttered and imploded. A lot of this was due in part to the proliferation of console gaming, which eliminated the need to be around people, but the inflexibility of the industry, which insisted on sticking to a “standard”, can’t be ignored.

Today, there’s only one American pinball manufacturer left, and they have a very set idea of what constitutes a machine.

They believe it should be a certain size, should cover certain topics, should have certain elements. That is financially sustainable up to a point, but the descent is imminent and perhaps already underway. Pinball is all but a collector pastime—we have a schedule of shows where people wheel out the same old antiques and once a year or so they unveil a new machine, with the same design principles as the last machine. We’ve gone from almost a dozen manufacturers to one, with two little workshops that make small, limited run machines. And there’s no outreach to getting younger people, or women, involved—just a lot of white men clutching their rotting, decrepit collections in the hopes that someone will come along and find it valuable. Which they won’t; those price books are very unforgiving.

Rigidity is the first base of implosion. 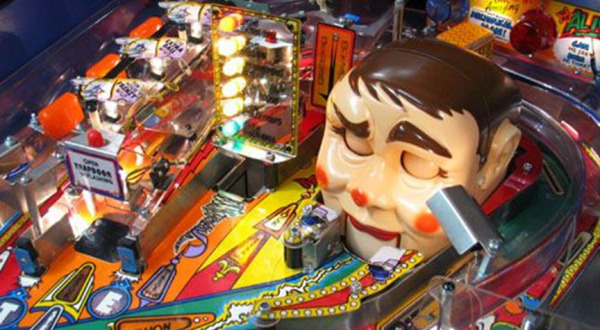 As pinball sits more or less on the verge of total collapse, we face the same problem as queerness. As a community and as an identity, we’ve created something unsustainable; we have put exponentially more effort into what “queer looks like” and “what doing this or that queer looks like” and in doing so we’re excluding the most marginalized of our community. The time and ability to hem and haw over what makes up a label is a privilege. People struggle with being noticed and recognized in our community as we occupy ourselves with psuedo-academic minutiae.

As we resist mainstream culture, we incorporate it, because we are still influenced by the standards of that culture. Heteronormativity is a rigid compulsory universal standard. If we fall into this trap of entrenching ourselves in pointedly defined language, we don’t create an alternative or a resistance to heteronormativity, we just create a mirror, a sister culture that prioritizes white masculinity and the commodification of radical identities and bodies as token affect, rather than essential and valued elements of a great, grander facet of humanity.

And if you’re reading twitter—we need each other now.