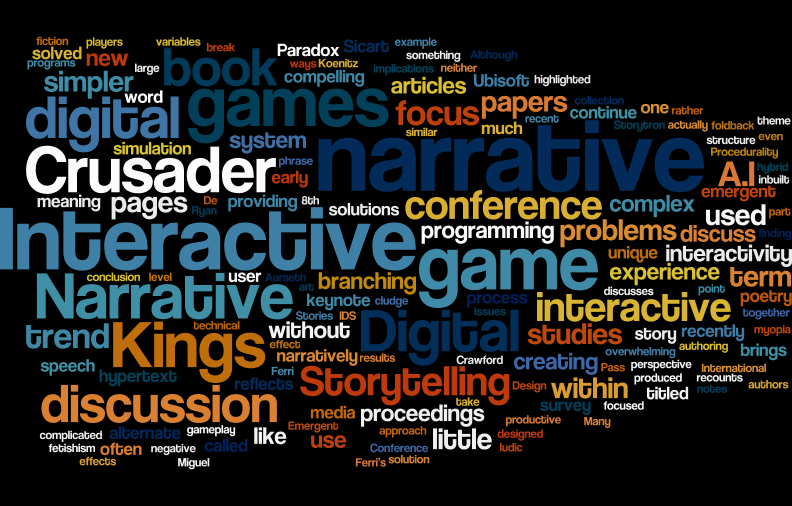 Antranig Sarian is a Masters student at Monash University who is researching the nature of choice. He has submitted essays to a variety of gaming websites, such as Will Kenny Remember That? Deconstructing the Telltale Formula. He received Honours for his thesis The Narratology versus Ludology debate in videogame studies.

The word “Interactive” is a much abused and rarely defined buzzword. Espen Aarseth notes this in his 1996 book Cybertext where he observes how the word “Interactive” is more of a marketing term with little academic depth, a slogan that brings to mind “computer screens, user freedom, and personalized media, while denoting nothing”.1 More recently, Miguel Sicart in Against Procedurality has criticised a trend within game studies to unduly fetishize the digital and structural aspect of games. 2 Nowhere are these trends more apparent than in the recently published conference proceedings of the 8th International Conference on Interactive Digital Storytelling. The term “Interactive Digital Storytelling” is supposed to tie the papers together, but does so with little definitional cohesiveness: signifying branching paths, collaborative fiction, digital spaces, authoring tools and simulation games all at once. This reflects a worrying trend in game studies, a trend which fetishizes the digital while neglecting to explore the theoretical implications of the games that are actually being discussed.

This collection of conference papers illustrates the recent trend in game studies towards a technology-obsessed focus on programming, A.I, and complex solutions to simple problems. In her book Narrative as Virtual Reality 2 (2015), Marie-Laure Ryan notes how recent studies have focused on the development of narrative A.I with little success.3 This focus on A.I is highlighted in Ryan, Mateas and Wardrip-Fruin’s “Open Design Challenges for Interactive Emergent Narrative,” which discusses utilising A.I as a solution to the “Narrative Paradox”––the conflict that exists between storytelling and interactivity. Behrooz, Swanson and Jhala take a similar approach to this issue in “Remember That Time? Telling Interesting Stories from Past Interactions” by attempting to improve an A.I’s ability to “tell” a story back to a player. Similarly, Harmon and Jhala have approached it in “Revisiting Computational Models of Creative Storytelling Based on Imaginative Recall” by creating an A.I system called “Skald” that’s designed to show narrative creativity.

This discussion largely glosses over simpler attempts to fix the “Narrative Paradox” without resorting to complex algorithms. Games like Crusader Kings 2, King of Dragon’s Pass, and FTL: Faster Than Light all manage to navigate the “Narrative Paradox” by creating a gap between branching micro-narratives and the ludic simulation, with the player’s persistent avatar linking the two together. It is a simpler solution that avoids the pitfalls of advanced A.I that this conference’s focus brings.

Two articles in this book both discuss Crusader Kings 2, with neither mentioning this facet of the game. Lucat and Haahr discuss Crusader Kings 2 exclusively in their paper titled “What Makes a Successful Emergent Narrative: The Case of Crusader Kings 2.” However, their discussion is a missed opportunity, providing surface level exposition of what the game is like without properly delving into the specifics of why the game provides a compelling case of emergent narrative. They fail to note, for example, the way in which Crusader Kings 2’s narrative consequences are partially randomised, an element of the game that plays a large part in encouraging the player to focus on the narrative experience and less on the mechanical consequences of their decisions. A similar essay which gathered survey data discovered that Crusader Kings 2 produced a meaningful experience of ‘emergent narrative’ while failing to mention why it was so successful. Hannesson, Reimann-Andersen, Burelli and Bruni’s survey, titled “Connecting the Dots: Quantifying the Narrative Experience in Interactive Media,” asked players which game produced the most satisfying “emergent narrative” experiences. The overwhelming answer was “Crusader Kings 2,” which was primarily chosen for its strong ‘online-community’ and a large presence of players narratively describing their gameplay online. The success of Crusader Kings 2 was reported as unexpected, with the authors expressing surprise that Minecraft and The Sims were not highly rated within the survey. Although noting some possible reasons as to why these games failed to succeed, the authors did not comment on why games like Crusader Kings 2 were actually successful. Both explorations of Crusader Kings 2 fall short because of an inbuilt myopia that is ubiquitous throughout these proceedings – games are only spoken about on a technical level, never a rhetorical one.

This theme of digital fetishism follows the conference beyond the pages of this book. Chris Crawford’s keynote speech at the conference, titled “The Siren Song of Interactive Storytelling” is enjoyable to listen to in its own right, and has been reposted on YouTube by Crawford. In the keynote he recounts the core issues surrounding interactive narrative, and laments mainstream gaming approaches, such as the “foldback cludge”, a system where a branching storyline ultimately re-joins at a single point. He then recounts the failure of his Storytron system, a byzantine program that created dozens of internal variables that dictated the behaviour of each individual character. By the end of his speech he asks his audience to continue his work. 4

A comment left on the video by a user named “Tommi Horttana” argues that Crawford gives a “too simplistic picture of what game developers usually do” and goes on to explain that popular RPGs use a system where they take “the foldback cludge but give your choice lasting meaning by adjusting gameplay and story variables. The accumulated effects of all these variable shifts will shape the story and the final conclusion.” He then goes on to cite King of Dragon Pass as a simpler example of this effect, an old game that tells a compelling interactive narrative without the use of complicated programming nor narrative A.I.4 The overwhelming theme is one of obfuscation, over-complication, and an obsession with finding complex answers to problems that already have simpler solutions despite the evidence of alternate paradigms such as Crusader Kings 2, even within the pages of the book.

The word “Interactive Digital Narrative” is a key phrase thrown about in the pages of this book with shifting definitions. At various points the phrase, often shortened to “IDS,” is used to signify authoring programs, collaborative fiction, hybrid books with a linear narrative, simulation games and branching narratives all at once. Gabriele Ferri in “Touchscreen Poetry: Analyzing Gestural Digital Poems” defines it as “narrative in digital media that changes according to user input”, which makes the term sufficiently broad and meaningless enough to include everything from hypertext novels to Doom 3. Ferri’s discussion on interactive poetry recalls much of the language that was used at the height of the early 1990’s hypertext era, describing them as having an “open interpretive trajectory,” “Fragmented Expression,” and a “Dischronic Structure.” Ferri’s description depicts touchscreen poetry as doing something new; however, her claims are reminiscent of the early response to hypertext literature, and the effects Ferri ascribes to interactive poetry is neither new nor uniquely “interactive” or even “digital”. The term is used loosely again in Sigarchian, De Meester, Salliau, De Neve, Logghe, Verborgh, Mannens, Van de Walle and Schuurman’s “Hybrid Books for Interactive Digital Storytelling” in relation to a media form called the “Hybrid Book.” The discussion does little more than celebrate the nature of hybrid books themselves. The vagueness of the term “Interactive Digital Narrative” has caused many of these articles to be celebrations of how futuristic and new their subjects are, rather than critical evaluations of them.

The conference proceedings occasionally break the trend of digital fetishism, providing an alternate glimpse into how ludology and game studies can fruitfully engage with games. Hartmut Koenitz displays this in “Design Approaches for Interactive Digital Narrative” by creating a more cogent and cohesive definition of IDS. Koenitz discusses it in terms of what he calls a “potential narrative” and brings a refreshing and unique perspective to the discussion that is not afraid to grapple with the theoretical problems that plague the area. Alex Mitchell’s article, “Reflective Rereading and the SimCity Effect in Interactive Stories,” is a clever discussion on the implications that interactivity has for re-reading in a narrative space. It is one of the few papers in the book that does not fixate on the digital, arguing instead that the structure and manner in which events are narratively presented are more important in creating a compelling interactive narrative experience. Dankoff and Shkirando from Ubisoft also bring a novel perspective to the conference with their paper “Narrative Review Process; Getting Useful Feedback on Your Story.” They use their personal experience as writers at Ubisoft to discuss the process of writing a narrative as part of an AAA game studio. They discuss how an auxiliary focus on narrative as an afterthought in the game development process often leads to the creation of the much cited “ludonarrative dissonance” effect. Their discussion poses a refreshing break from the predominately technology focused discourse, outlining their elaborate review and feedback process used at Ubisoft. These discussions act as an oasis in the otherwise digital obsessed pages of this book, providing both unique insights into the field and an alternate approach into how interactivity can be analysed and developed in ways that are fruitful and fulfilling.

This collection of conference papers ultimately reflects an inbuilt myopia that has emerged in the after-math of the narratology/ludology debates of the previous decade. Most of the essays, articles, and surveys conducted focus overwhelmingly on finding complex solutions to problems that can be solved within a simpler framework. Many of the papers contain programming jargon and syntax, only to then announce negative results in their conclusion. Although negative results can be productive, the discussion sections of these experiments fail to outline productive new routes. An instance of situational irony arises during Crawford’s keynote speech as he elaborates on how the complicated programming of his Storytron experiment failed, only to then urge fellow researchers to continue down his doomed path. These issues are amplified, and are a by-product of, the vague and disorganised use of the terms “Interactive” and “Digital,” which are used throughout the proceedings to refer to radically different things. Many given examples of “Interactive Digital Storytelling” are glossed over in an expository style with little discussion of their structure. A few articles exist that provide insights, but they are few and far apart.

In the early 2000’s, Aarseth lamented how academics often subjected games to what he called ‘narrativism’, where their meaning was absorbed wholly into a literary analysis that ignored what made them unique as games.6 This book reflects an opposite trend that has been recently highlighted by Miguel Sicart in Against Procedurality. Instead, games themselves have been fetishized as ‘interactive’ and ‘digital’ programs to the point where their meaning has been reduced entirely to what Sicart describes as their procedural elements. This ignores the ways in which the communicated meanings of games can be improved upon narratively and artistically, and instead transforms them into technical problems to be solved empirically. If games are to be art, then they need to be treated like art. This means understanding interactivity as something that can be creatively designed, rather than a problem to be solved.  Until then, research such as that found within the pages of the 8th International Conference on Interactive Digital Storytelling will continue to flounder aimlessly, worshipping the ludic without improving upon it.