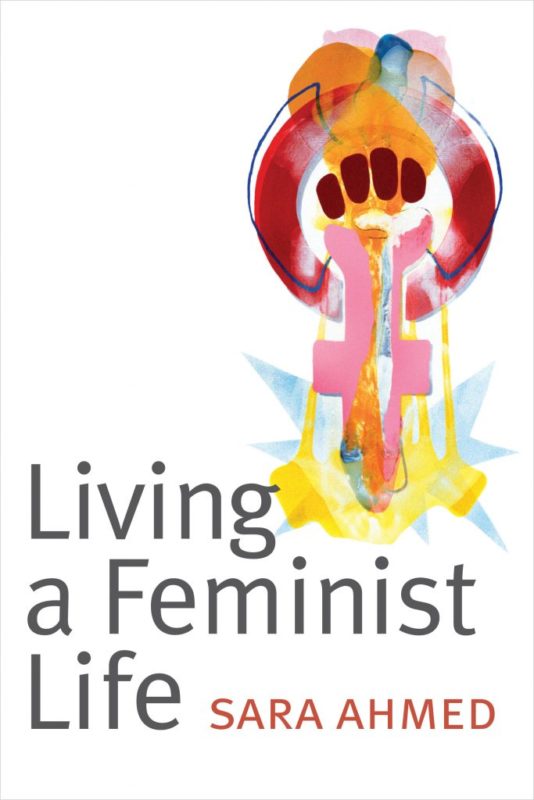 Adan is an PhD student at McMaster University working in Mad studies and digital media. Her killjoy survival kit includes Heroes of Might and Magic 2, Manic Panic hair dye, sometimes skipping social events, and someone to talk to when everything feels terrible.

I imagine an academy filled with feminist killjoys, showing off our scars and canes and mohawks and afros and ponytails, wearing dresses and t-shirts and crop tops and bowties and hijabs. We may or may not have vaginas— that doesn’t matter— and we identify as queer, bi, lesbian, straight, two-spirited, genderqueer, butch, femme, non-binary. We have depression, anxiety, PTSD, myalgic encephalomyelitis (ME), and chronic pain. We play Candy Crush, Resident Evil, Mario Kart, Settlers of Catan, solitaire, and LARP. We keep talking and playing and writing and we can’t be shut up or shut out. We are here.

In reality, the university continues to remain a place of cisgender white male able-bodied privilege that is policed and protected through hegemonic practices, policies, and discourse (Church 2013; Mitchell & Snyder 2015; Price 2010; Reville 2013; Stabile 2011). We greatly need more feminist voices in academia. Sara Ahmed’s 2017 book Living a Feminist Life addresses both the importance and difficulty of being a feminist in the academy. The feminisms discussed here address not only gender inequality, but queer and trans rights; these feminisms are anticolonial and antiracist, and attentive to poverty and disability (which includes Mad bodies and chronic illness). From the family table to the classroom, Ahmed’s text moves across highly charged everyday interactions that often go undocumented or unrecognized in higher education. Although her book addresses the university at large, this review will situate its significance within game studies, a field that is rapidly developing as a predominantly cisgender white male space. I encourage all FPS readers to pick up Sara Ahmed’s book and think critically about their everyday practices. For feminist killjoys already struggling in game scholarship— you are wonderful, you are valued, you are not alone— Ahmed’s text may act as a companion, perhaps part of your own “killjoy survival kit” (235).

Press A to Killjoy

The label of “killjoy” is applied to troublemaking feminists, hysterical girls, and the “figure of the angry black woman” (Ahmed 77). We are not only the bearer of bad news; “We become a problem when we describe a problem” (39). Ahmed, however, reclaims this label and suggests that killing joy that relies on the subjugation of marginalized bodies is a necessary endeavor to social change. So we continue to point out sexism, racism, and ableism/sanism. We make department socials awkward and uncomfortable. We resist the pressure to smile and apologize for making this harm legible. We are willfully unhappy with the state of game culture. As players we have killed giant spiders, Nazis, dragons, and time: we can kill racist and misogynistic joy, too.

She is in a seminar room, now, talking about games. Most of the other scholars are male. She is interrupted. She tries to make her point again and is interrupted again. We are housewives in the home and the workplace; we smile at our male instructors and peers as they mansplain game theory and insist that we can’t possibly write our thesis without playing these ten games. If you started playing as an adult, you will have your credentials constantly questioned, will have to keep proving that you have the right to study games. As a female player, your opinions can be made less valid if: you watched the game on YouTube, played the game with your boyfriend (we are default heterosexual), didn’t get past level 20, play on casual, play narrative games, play The Sims (it’s not a real game), a sexist game made you furious (you’re oversensitive, exaggerating, hysterical).

We start to feel alone. We think about switching into a different field. But today we have enough energy to keep going. We push back. (Today I spent all my energy buttoning my shirt and the insomnia and depression won’t let me push back. I can see the field moving away from me. From this far down, the ivory tower appears unscalable).

Sometimes it becomes so unbearable that we snap. Snap: “we have to struggle to snap bonds, including familial bonds, those that are damaging or at least compromising” (Ahmed 188). “Snap: when she can’t take it anymore; when she just can’t take it anymore” (190). We have memories of these moments of breaking, moments of sounding sharp, on edge, over the edge. We are told to calm down, to not take things so personally (racism and sexism are personal). We are told that we are too hard on other people, that we expect too much. We are told that we wreck friendships, as if feminists revel in needless destruction. But the moment of feminist snap is not violence, it is the result of violence. It is a way of speaking back to violence. It can be a mode of survival.

Snap can mean speaking back to toxic games culture, like the critical works found here   and here and here . Snap can be speaking back to the academy as a place of able-bodied privilege or cisgender hegemony . It can mean creating a space for female-identified players, like the GI Janes at the University of Waterloo, and it can mean documenting the decline  of that feminist space as the group becomes dominated by male players, and subject to the everyday misogyny that is permissible within the patriarchal university. It can also be smaller, a part of ordinary academic life: exchanging words with a peer or instructor, posting on Facebook, or Tweeting. (As an alumni and Mad woman, I recently criticized Waterloo English’s decision to share a list of easy self-care activities as a response to an on-campus suicide. I was “put in my place” by the response. My partner also voiced his concerns, and was thanked for his engagement. These moments that take place online and offline are charged with affect, power, and privilege).

Snap can also mean a refusal to participate. Ahmed worked for three years at the Centre for Feminist Research at Goldsmiths College in London, UK. The centre was created to address sexual harassment within the academy, and yet the institution consistently blocked any real change from occurring, even as “diversity” and “equality” were used as PR buzzwords to promote the university. In the spring of 2016, Ahmed resigned in protest. Ahmed insists that:

In game studies we see other refusals: Brenda Brathwaite resigning as co-chair of the IGDA; Leigh Alexander quitting game journalism; female game scholars leaving the institution. Instead of criticizing women who leave academia, we need to celebrate and support their refusal to reproduce the system, and their decision to keep killjoying outside the university.

There are other ways to do game studies, to enliven scholarship as a series of subversive feminist practices. Ahmed identifies citational practices as a key site of feminist struggle, explaining that “When I was doing my PhD, I was told I had to give my love to this or that male theorist…I was never willing to agree to this restriction” (15). Feminists in the academy are all too familiar with the white male syllabus, with the archival practices of the academy that privilege already privileged voices over the voices and bodies in the margins. Whose voices are framed as peripheral, taught in elective courses or in the final week of class as a gesture to those othered writers who have struggled to speak within a culture of violence and silencing? And how do we, as women and queer writers and Mad/disabled students and scholars of colour, identify a tradition in which we can speak, in which we can be acknowledged, when these very pathways are obscured through educational practices?

In her section on diversity work, Ahmed explains that diversity policies in the institution can be used as a wall, as a way of not changing practices (105). I worry about uncritically celebrating games with white female protagonists, a trend that co-opts feminism as a Trojan horse for white imperialism. I worry about being used as proof of a benign, non-oppressive university (because they admitted a few white female game scholars into their rank, presumably expecting us to keep quiet, to conceal our queerness, disability, poverty). White female inclusion in academia and gaming is a temporary, marginal, tentative inclusion. We need to be allies, to point each other toward Anita Sarkeesian’s series on WOC representations in gaming , to listen to activists like Tanya DePass  and put more WOC on our syllabi (check out the many excellent intersectional feminist pieces on Not Your Mama’s Gamer).

Read as an ally, rather than an oppressor.

Alongside citational practices, Ahmed argues for counter-archiving, insisting that “Documentation is a feminist project; a life project” (26). Her text is punctuated by personal anecdotes in and outside the university. These accounts of everyday sexism and racism are just that: a way of accounting for, of adding up, of remembering the violences that are enacted against women of colour. In gaming, the harassment of women is becoming widely documented. But more is needed that recognizes the academy itself as a place of personal and impersonal, individual and structural violence against women, students of colour, and queer, disabled, and Mad bodies.

Ahmed has stories of groping and catcalling. I have stories too, the kind all women have but we don’t share. We don’t talk about them. Instead, we internalize our fear and hurt and anger. We push away these memories of public and private shaming. At a university residence party I once drank until I blacked out. In the morning, a male friend told me “You shouldn’t drink so much. You’re lucky no one did anything to you.” Another party: some guy pulls me over his lap and spanks me. The whole room laughs. Lucky. Another room: my shirt and bra are forcibly pulled off, more laughter. It’s filmed on someone’s phone. Another man: the one who followed me home from a bar. Lucky. Another man: the one who choked me because “I seemed like the kind of girl who would be into that.” Lucky. Another man: the one who punched holes in the walls of our home and slammed the car door repeatedly while I sobbed inside.

Sometimes I laugh about these things. I want to be in on the joke. I want the joke to be harmless. So many times I’ve been made to feel so incredibly helpless. Sometimes I wonder how much my depression is biochemical and how much of it is living through everyday sexism and then being told “you’re overreacting,” “It’s he said/she said,” “we already have equality.” In other words, shut up. Just shut up. Don’t criticize the university that’s deigning to give you a (tenuous, conditional) seat at the table. Say thank you and take the scraps you’re offered. You don’t deserve any better.

If I seem loud and pushy, it’s because I’ve had to be to survive in academia and the “bro” discipline of game studies. And I want to be here, working on my dissertation on Mad feminist identity, because it matters. We work inside and outside the institution to make change in our society, because it matters so fucking much.