Andrea Braithwaite is a Senior Lecturer in Communication and Digital Media Studies at the University of Ontario Institute of Technology. Her research focuses on gendered and affective discourses of crime, deviance, and justice in media, particularly games, gaming communities, and Canadian pop culture.

For many academics, these are familiar figures. In the Nancy Drew game Trail of the Twister (see Figure 1), these are suspects. The 2010 point-and-click mystery puts players in the shoes of iconic detective Nancy Drew, who is undercover as a research assistant at the fictional Canute College in rural Oklahoma. Called in by business tycoon P.J. Krolmeister, Nancy is investigating a series of accidents plaguing the severe weather research team he sponsors. The mystery saboteur is jeopardizing more than just data collection; they are hindering the team’s chance at success in a privately-sponsored competition to develop a formula that accurately predicts tornado touchdowns. The $100 million prize is also the last hope for Professor Scott Varnell, since the college otherwise will not cover the cost of a dedicated workspace for his meteorology department.

As Nancy, players sift through college and community members to determine who is behind these incidents of sabotage. Trail of the Twister embeds players in a contemporary college environment, and offers a critical perspective on how discourses of economic efficiency are assimilating academia, research, and higher education. Trail of the Twister’s mystery framework does more than simply suggest the neoliberal academy is worth investigating. The game also makes an argument about the neoliberal college as a criminal environment, by foregrounding corporatization, precarious labour, and responsibilization as standard operating procedures and as plausible motives for a wide array of suspects.

The player’s position as super-sleuth Nancy Drew scripts the academy as a condition that has already driven its faculty, staff, and students to desperation. Our possible actions are limited in response, as Nancy rarely even needs to investigate; she runs errands as the people around her eventually implode. This is an example of how gameplay itself can be polemical, what Mary Flanagan (2009) calls critical play: to “occupy play environments and activities that represent one or more questions about aspects of human life” (p. 6). In Trail of the Twister, our possible actions as a research assistant at Canute College are moments in which the game makes arguments about the contemporary college “through the authorship of rules of behaviour, the construction of dynamic models [ . . .] to make claims about how things work” (Bogost, 2008, p. 125; emphasis in original).

Trail of the Twister suggests that higher education is increasingly neoliberal in orientation. As Wendy Brown (2015) explains: “Neoliberalism is best understood not simply as economic policy, but as a governing rationality that disseminates market values and metrics to every sphere of life [. . .] it formulates everything, everywhere, in terms of capital investment, including and especially humans themselves” (p. 176). While this is not the only definition (see, e.g., Monbiot for a history and list of authors), it is a useful starting point, for it encourages us to think about how Trail of the Twister represents “capital” within and around Canute College.

The corporate takeover of knowledge production is the backbone of the game’s claims about how the academy works. Corporate interests enable Nancy’s timely internship: she is called in by business magnate P.J. Krolmeister to investigate the series of accidents that are threatening his investment in the research team. Krolmeister is loath to continue supporting them unless they are able to produce data that can be monetized – Professor Scott Varnell’s team is investigating how tornadoes form and grow; Krolmeister wants to produce and market accurate tornado alarms to communities throughout Tornado Alley. The team also needs Krolmeister’s continued support in order to compete in a privately-sponsored storm chase and thereby secure future funding. The direction of their research, the value of their data, is predicated on what corporate and industry partners are looking for. As Henry Giroux (2013) reminds us, “academic subjects gain stature almost exclusively through their exchange value on the market” (para.13).

Corporate demands determine the path of knowledge generation, the use of data, and the spaces in which these activities occur. Unless Scott’s team wins the contest by gathering the most lucrative information, there is no money to justify housing the department since allocation of space reflects financial value. Canute College’s students are also impacted by this, as their study and social spaces are being handed over to commercial ventures. As the campus paper reports: “’They took down our cherished mascot, paved the commons and replaced it with a strip mall,’ said junior Martin Applewright. ‘I mean, that says something about the school’s priorities right there. I’m guessing when I finally get my diploma it’ll have a ten percent off coupon for Steakbilly’s printed on the back’” (see Figure 2). This is what Brown (2015) calls an enterprise zone, which “literalizes as it spatializes the domination of the university by the needs and purposes of capital and spatializes as well the merging of business, state, and academe” (p. 198). 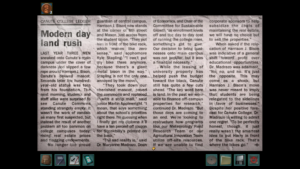 The Business of Academic Labour

Students are just one of the angry groups on campus. While undercover as a research assistant, Nancy experiences the typical working conditions for academic labour: insecure, contingent, and unsafe. She is a replacement for the previous assistant who was injured in one of the acts of sabotage, and learns how “[p]recarity has become a weapon to both exploit adjuncts, part-time workers, and temporary labourers and to suppress dissent by keeping them in a state of fear over losing their jobs” (Giroux, 2013, para. 42).

Frosty, for example, is a talented weather photographer, and provides visual records of the storms the team tracks down. His contract with the college, however, precludes him from using any of these photos in his own portfolio. Between the team’s uncertain future and the current limits on his creative work, Frosty is trapped in a dead-end and underpaid position. Chase, the team’s mechanic, is similarly stuck: he is restricted to basic repairs of the team’s aging vehicles and not recognized for any of his own clever inventions, like a device that humanely hoovers up prairie dogs so they can be safely relocated away from the research equipment.

Nancy’s work as a research assistant is also unchallenging and uninspiring. Her sole tasks (and the players’ only actions) are chores: fetching and fixing and filing. This limited range of activities is even more noticeable for players familiar with other Nancy Drew games, in which puzzles and obstacles vary throughout the story. Here, however, they are the same few over and over again, an argument about the rote and repetitive work assigned to research interns. Nancy is almost too busy setting mouse traps or repairing engines to find time to snoop; most of the game’s clues are revealed in the process of filing paperwork or cleaning storage areas.

Even those higher up the academic hierarchy appear trapped in frustrating working conditions. Academic metrics frequently equate productivity with profitability: “knowledge is not sought for purposes apart from capital enhancement, whether that capital is human, corporate, or financial” (Brown, 2015, p. 177). Professor Scott Varnell and newly-minted Ph.D. Debbie Kircum are both facing this particular perception of productivity. Nancy stumbles across documents indicating that Scott has been denied tenure for precisely these reasons, since Canute College cannot make money off of what doesn’t turn storms into tornados, only what does (see Figure 3). 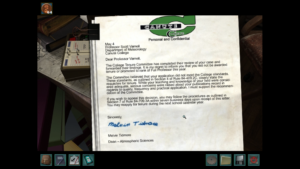 Debbie, meanwhile, has received a tenure-track offer from another school and is keeping that secret to avoid upsetting Scott. Much of the work we see her do is what Arlie Hochschild would call emotional labour: Debbie deals with Scott’s temper-tantrums; she soothes the sore feelings of the other team members; and she makes Nancy feel welcome and wanted. It falls to Debbie, again and again, to keep the team motivated in the face of dire circumstances: the mystery saboteur, the injured research assistant, the lost data, the flagging corporate sponsorship, the future of the department itself.

The Regime of Responsibilization

Debbie’s determinedly sunny outlook is an example of responsibilization: “a regime in which the singular human capacity for responsibility is deployed to constitute and govern subjects and through which their conduct is organized and measured, remaking and reorienting them for a neoliberal order” (Brown, 2015, p. 133). We internalize a neoliberal perspective so that its expectations come from within; we acclimatize to discourses of efficiency so that we blame ourselves when we fall short.

The shifting sense of what makes research and labour good and useful has an impact on how members of the academic community feel about themselves and their work. As Scott laments: “Before they defunded my department I got the best of the best, students who really cared . . . But those days are over. Don’t talk to me about disappointment ‘til you’ve lived long enough to experience it.” Scott’s increasingly manic demeanour makes the toll of responsibilization clear, as it becomes entwined with a broader understanding of “the good life.” His failed tenure application is more than just professional disappointment, as he later despairs: “Dreams fade. Hearts get broken. Friends get too lost in their own lives to call. Trust me, enjoy your youth while you have it, kid – because the downhill ride? It ain’t fun” (see Figure 4). 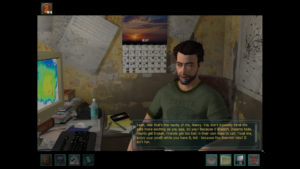 Scott is, at least narratively, the bad guy: he lures Nancy to a remote location, discloses that he did indeed injure the previous assistant after being bribed by a rival researcher, and berates her for being so nosy. The charge of nosiness, however, isn’t much of a deterrent to plucky Nancy Drew, and not nearly as frightening as the tornado rolling into town. Meeting up with Debbie to help get everyone to safety, we learn that she is the saboteur – engaging in increasingly destructive acts in the hopes that Scott would finally snap from the stress and the college would have no choice but to fire him.

Debbie trashes sophisticated technical equipment, knowingly sends a new intern into the field unprepared, and colludes with team members to make a colleague look unprofessional. Yet because she is sitting on some lucrative data, she is offered a tenure-track position and made head of the meteorology department. Scott, who spends most of the story being self-indulgent and sad about the school’s emphasis on commercializing data, is criminalized and out of a job (see Figure 5). 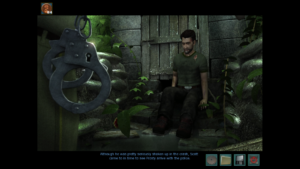 None of this is Nancy’s doing. Like the rest of the gameplay, Nancy – and the player – haven’t really gathered any information for the college, or the corporation, to consider. She has – we have – watched professors, students, and staff navigate the neoliberal college to figure out which behaviour is rewarded and which is punished. In other words, we have seen how Trail of the Twister can encourage critical play as an “instrument for conceptual thinking, or as [a] tool to help examine or work through social issues” (Flanagan, 2009, p. 1).

Henry Giroux claims “the university is nothing if it is not a public trust and social good” (2013, para. 3). Yet when we unearthed Scott’s tenure rejection letter and saw its dismissal of the “practical application” of his tornado research we may have suspected he was the villain. This tells us that contemporary academia – a system in which people work, study, teach, produce, struggle – is moving away from such ideals. As public conversations about the value, and values, of higher education gain momentum, something like Trail of the Twister can hopefully encourage more people to ask about and reflect upon Giroux’s question: “What happens to education when it is treated like a corporation?” (2013, para. 14).

Many thanks to the organisers, reviewers, and attendees of the 2017 CGSA conference, for their feedback and support.

Her Interactive. (2010). Trail of the Twister. Microsoft Windows and MacOS.